I was shy and introverted when I was growing up in Salt Lake City, Utah, in the 1990s. At the age of 16, I turned to photography, as my darkroom created a space in which I could express myself. I was intrigued by the experimental nature of exposing, developing and printing black-and-white ﬁlm because these processes enable a greater latitude for personal expression than color film. Also, I feel color often distracts from the image’s message. As one who is colorblind, I find it difficult to distinguish between certain colors. So I found beauty in the subtleties of the gray scale and textures of black and white, which can better reflect the soul of the photo’s content. Today, I mostly use digital tools to tone images and now can convert color images to black and white. 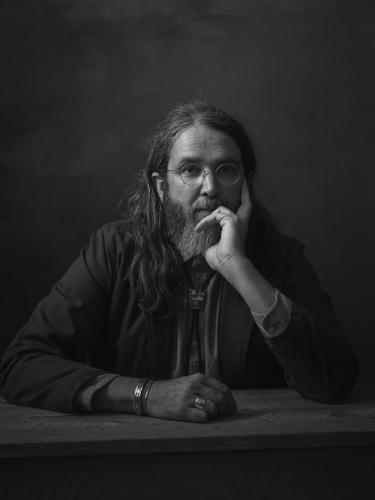 As a youth, I also became interested in the First Amendment of the U.S. Constitution, which guarantees that those who live in this country have the right to speak freely, to have freedom of the press, to worship, to peacefully assemble and to petition the government for grievances. Over time, I realized that with these rights and privileges come responsibilities and that photojournalism was a way to give a voice to those who have slipped through the cracks of our collective narrative.

I began to study photojournalism at the University of Montana in 2006 because I wished to gain reporting and storytelling skills and be around other Native journalists (Montana has 12 American Indian tribes and seven federally recognized Indian reservations). During my undergraduate years, I participated in Freedom Forum journalism diversity workshops that showed, on average, less than 0.5 percent of journalists in newsrooms are American Indian. Because of this, non-Native media tend to portray American Indians as living in the past and, stereotypically, as defeated people. Part of my responsibility as a photojournalist is to provide a space for Indigenous people to reclaim their power and tell their own narrative.

I chose photography as my medium because it is an ever-evolving, multidimensional mode of storytelling, where journalism, art, portraiture, text and image combine. However, it also can promote healing public discourse and positive social change. My stories from Indian Country reveal nuanced layers of humanity from contemporary Native American communities and individuals. I believe that revealing these layers allows people to feel empathy toward their surrounding communities and the rest of the world.

My work is also an act of self-discovery, a look into my Diné (Navajo), Ho-Chunk (Winnebago), Mormon settler and European heritage. I am descended from a Diné slave named Rose. In the mid-1840s, she was a young child when Ute slavers took her from her Diné homeland. They held her captive for more than a decade before eventually trading her to Aaron Daniels, a Mormon settler in Utah. Rose and Aaron had four children, and the family enrolled in the Northern Ute Tribe and was allotted a tract of land on the Uintah and Ouray reservation in northeastern Utah. My siblings and I are the ﬁrst generation born off of that reservation.

Rose’s story always caught my attention because my teachers in my school and my church never mentioned the more than 300 years of Spanish imperialism or the economics of human trafﬁcking and slavery throughout the Americas. I’ve spent many years researching these topics and traveling throughout the traditional tribal territories in the Inter-mountain West, Rocky Mountains and Colorado Plateau where many of these atrocities happened. The roads eventually pointed to the Pueblo of Abiquiú. This community of Genízaro people of mixed Indian and Spanish heritage was established on the borderlands of the Spanish colonial slave trafficking region in northern New Mexico.

To photograph and tell the story of the people who live in Abiquiú for one of the National Museum of the American Indian’s “Developing Stories: Native Photographers in the Field” photo exhibitions (AmericanIndian.si.edu/developingstories), I spent more than two and half months in 2019 as a guest among the Genízaro people. I rented a trailer on the dirt road that exits the pueblo from a generous Genízaro couple, Frankie and Carmen López. During my stay, I was able to photograph many of the community’s residents because I built trust with them by sharing my own vulnerability, my personal family story and my own trials and tribulations.

I was invited to Rafaelita Martinez’s home for a Sunday dinner of “carne adovada” (a red chile pork stew), “papas” (fried potatoes) and tortillas—one of the best meals I’ve ever had. I drank beers and ate “chicharróns” (fried pork skins) with Roberto Garcia down by the Rio Chama as he told me about his complex mixed Spanish and Hopi family history. I attended significant spiritual ceremonies and celebrations, including Sunday and Tuesday mass at the colonial-era Santo Tomás Catholic Parish and a community prayer and Catholic rosary ceremony at the Morada de Alto. I was shown the church’s collection of carved “bultos” (painted wooden saints), some dating back to the 1700s. I helped harvest Christmas trees for the community and the church. I watched Genízaro youth conduct weekly dress rehearsals for the Santo Tomás feast day. These are all honors and privileges that I will never forget.

Empathy and shared vulnerability can create connections and open avenues of communication and collaboration that can aid in telling an accurate story. I hope those who see my photos and read about the people of Abiquiú will learn more about American Indian cultures and the effects of colonial violence. I want people to question the inaccuracies of the colonial historical narrative and the harmful stereotypes that encourage enmity. Ultimately, I hope they will be inspired to become allies for Native communities and causes because everyone in the Americas is standing on Native lands. This is medicine.

See the "The Genízaro Pueblo of Abiquiú" photo exhibition.

Russel Albert Daniels (Diné and Ho-Chunk) is a freelance photographer based in Salt Lake City, Utah. His work focuses on Native Americans’ resilience and identity.