This Far and No Farther

I didn’t plan on being an archaeologist. After a few false starts in college in the 1980s, I ended up pursing a bachelor’s degree in Anthropology and Native American Studies from the University of Montana so I could write papers on my tribe. Then I became an archaeological field hand, or “shovel bum,” for a few years; my degree didn’t open other doors. Next I got a job working as an archaeological field technician for the U.S. Forest Service. After obtaining Master degrees in Anthropology and Landscape Architecture from Iowa State University and spending decades in the historic preservation field, I ended up accepting the position of Tribal Historic Preservation Officer, or THPO, for my tribe, the Iowa Tribe of Kansas and Nebraska, in 2013. 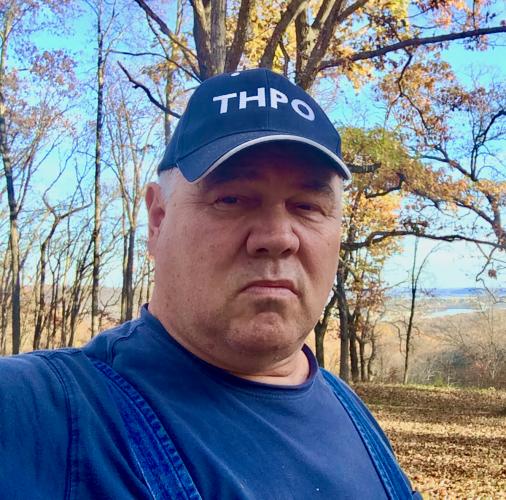 As the Tribal Historic Preservation Officer of the Iowa Tribe of Kansas and Nebraska, Lance Foster sometimes monitors archaeological excavations on his tribe's ancestral lands.

As the Tribal Historic Preservation Officer of the Iowa Tribe of Kansas and Nebraska, Lance Foster sometimes monitors archaeological excavations on his tribe's ancestral lands. 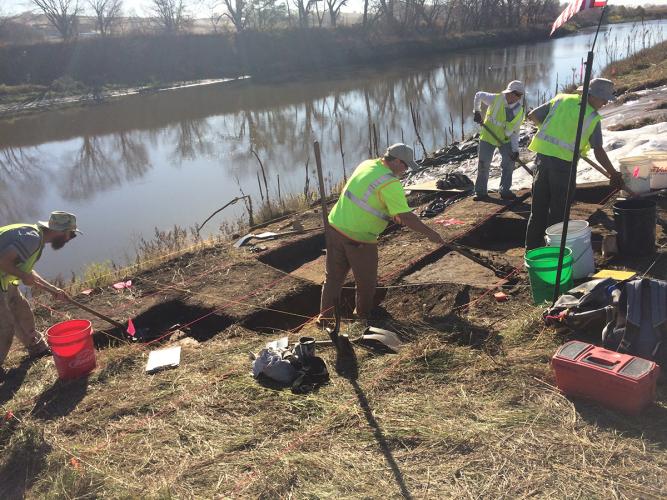 In western Iowa, archaeologists and Iowa Department of Transportation crew members helped salvage some of a former Iowa Tribe village that was occupied more than 600 years ago and being eroded by a river.

In western Iowa, archaeologists and Iowa Department of Transportation crew members helped salvage some of a former Iowa Tribe village that was occupied more than 600 years ago and being eroded by a river.

As a THPO, I do a variety of jobs for my tribe, mostly compliance reviews of archaeological projects and occasionally monitoring construction excavations on our ancestral lands. Balancing the need to preserve our ancestral places and working within federal and state laws along with the expectations of tribal leaders and members is always challenging. However, as development and erosion are increasingly encroaching upon ancestral sites, THPOs are becoming more and more essential.

The process for establishing a THPO grew out of the National Historic Preservation Act (NHPA), which was passed in 1966. Communities across the United States were concerned about losing their historic buildings and sites without notice, especially in the wake of the construction boom following World War II. NHPA established a set of legal provisions to help understand, manage and protect historic places across the United States, from archaeological sites to historic buildings and districts. This gave communities a chance to voice any concerns about potential projects, which are balanced against the goals of the project. The process, not the outcome, is legally mandated.

Section 106 of the NHPA mandates compliance reviews for historic significance of any projects on federal lands, using federal funds or requiring federal permits. To do these reviews and manage the process, NHPA established State Historic Preservation Offices (SHPOs) in each state through annual grants administered under the National Park Service, which also has oversight over the SHPOs. Compliance reviews for projects include all federal lands, permits and funding, so for many years, this gave SHPOs power over projects on Native ancestral sites.

Inherent conflicts between states and tribal sovereignty naturally resulted. SHPOs often had little knowledge or understanding of the laws of native nations or traditions of communities. So in 1996, the first 12 Tribal Historic Preservation Offices, the equivalent of a SHPO, were established with the same duties but with jurisdiction specifically over certain federal and tribal lands within a reservation’s boundaries. The legal jurisdiction of each tribe was limited to these lands within its reservation boundaries.

In addition, compliance reviews for any projects using federal funds proposed on ancestral lands require consultation with tribes with ties to ancestral and historic connections to these lands to see if there are any concerns with projects that could impact those ancestral sites. Any state, city, communities and even companies or individuals using federal dollars have to send compliance reviews to all tribes that claim ancestral connections to the land on which the site is found. Some tribes, including mine, have connections to ancestral lands in a dozen states or more. Unlike with projects on reservation lands, THPOs are not legally required to review any off-reservation projects, and certainly we don’t get paid to review them, yet we receive hundreds of them every month. Although we may have only one or two THPO staff, we keenly feel the responsibility to our ancestors, our homelands and our communities to review them. So stacks of requests grow, agencies become frustrated with low response rates and THPOs often go through high staff turnover and burnout.

But American Indians are used to achieving the impossible. We work together with other THPOs. We establish collegial relationships with those agencies who want to work with us. We focus on the projects that have the greatest potential for impacts such as multistate pipelines. We are like the doctors and nurses in the television show "M.A.S.H.," with an ongoing flood of casualties who we must triage. We learn how to do more with less in critical situations. And that’s just the pressures from outside.

We also experience pressures from inside. For example, our own communities are often suspicious of us because we work with archaeologists who often must excavate objects from ancestral and historic sites in order to save them from destruction from bulldozers, the burying of utility pipes or the construction of highways. At the same time, Native community members also have high expectations that THPOs can stop projects and save ancestral sites forever on our own based on a complex law few understand.

One successful collaboration was with the Iowa Department of Transportation (IDOT) and Iowa’s Office of the State Archaeologist (OSA) in 2017. On a site called Dixon in western Iowa, river erosion was exposing parts of a former ancestral village, including once-buried human remains. A plan was undertaken to mitigate the erosion through engineering, which also required the relocation of the ancestral remains to unaffected portions of the site where they could be reburied. Several tribes, including my own, united and assisted the IDOT and OSA in this sensitive operation over several months. In the end, the reburials were accomplished by the tribes, during which an eagle soared over us, blessing the ceremony.

Tribal historic preservation officers often seem to reflect the guardianship role of those old warrior societies. Following rules, we unite to defend our lands and ancestors. Sometimes we have to plant a staff and say, “This far and no farther.”

Lance Foster is vice chairman and the tribal historic preservation officer of the Iowa Tribe of Kansas and Nebraska.