A View into Two Worlds

More than 50 years ago, the Smithsonian received a dozen 1898 photographic portraits of Zitkala-Ša (“Red Bird”), an accomplished Yankton Sioux writer, violinist and composer who was also an outspoken advocate for Indigenous rights and women’s suffrage. The images of the 22-year-old Zitkala-Ša were created by Gertrude Käsebier, a prominent American portrait photographer in New York City. Käsebier’s granddaughter, Mina Turner, donated the images to the Smithsonian in 1969. The collaborative session captured a lasting, beautiful depiction of a life lived in two very different cultures. 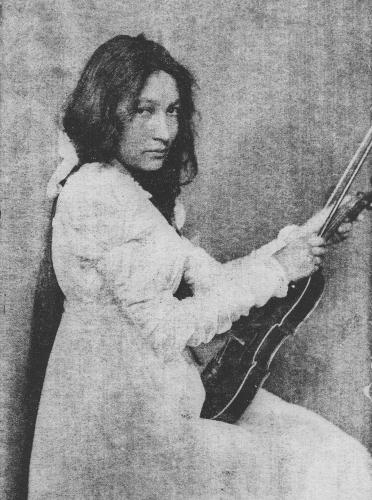 In 1898, Gertrude Käsebier created these portraits of Zitkala-Ša wearing a European-style dress (above) and traditional Yankton Sioux clothing (following image) to depict how she lived in both Western and Native cultures.

In 1898, Gertrude Käsebier created these portraits of Zitkala-Ša wearing a European-style dress (above) and traditional Yankton Sioux clothing (following image) to depict how she lived in both Western and Native cultures. 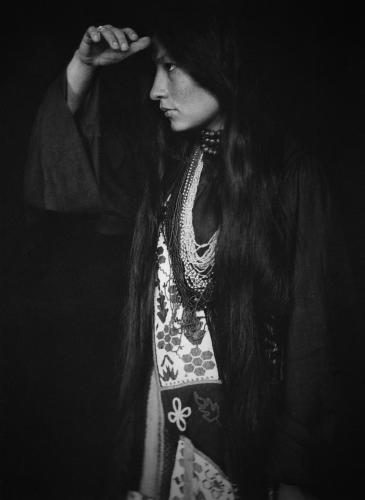 Zitkala-Ša, whose English name was Gertrude Simmons Bonnin, was born in 1876 to a German father and Native American mother, who raised her on the Yankton Indian Reservation in South Dakota. As a youth, she attended a Quaker boarding school in Wabash, Indiana, called the White’s Manual Labor Institute. She would later attend Earlham College in Indiana until 1897, when her natural musical talents drew her to the New England Conservatory of Music in Boston for two years.

Although more than two decades apart in age, the women became friends and Käsebier encouraged Zitkala-Ša to continue her music training. Zitkala-Ša became a concert violinist and composer. In 1913, she collaborated on “The Sun Dance Opera,” one of the first operas about an American Indian topic.

Throughout her life, Zitkala-Ša worked tirelessly for American Indian citizenship rights, independence and sovereignty. While at Earlham College, she became known as a scholar and celebrated orator who firmly opposed the “Americanization” of Indigenous people. She later penned articles for publications such as Atlantic Monthly and Harper’s Weekly as well as short stories and books that reflected upon the duality of living in two different cultures.

In 1902, she married Raymond Talephause Bonnin, who was of Yankton-European ancestry. After relocating with her husband and son to the Washington, D.C., region in 1917, she joined the Society of American Indians to help influence the U.S. Congress to pass the Indian Citizenship Act of 1924 and the Indian Reorganization Act of 1934. She created the Indian Welfare Committee within the General Federation of Women’s Clubs to advance Indigenous voting rights. She and her husband co-founded the National Council of American Indians in 1926 to attain proper healthcare, legal status and land rights for Indigenous peoples and served as the organization’s president until her death in 1938. She was 61.

Zitkala-Ša is buried at Arlington National Cemetery with her husband, a World War I veteran. In 2020, the Lyon Park Citizen Association in Arlington, Virginia, renamed a park near where she lived Zitkala-Ša Park.

Michelle Delaney is a photo historian and assistant director for History and Culture at the National Museum of the American Indian.