Indigenous peoples have spoken out on a variety of social issues for decades, yet during the past two years some of these voices have become more amplified and supported as other social movements also gained momentum. But to truly achieve social justice for Indigenous peoples, they must also have “language justice”—the right to speak, read and learn in the language of their choice. Colonial suppression of Indigenous languages has led to the suppression of systems of knowledge, denial of experiences and the near erasure of Indigenous worlds. 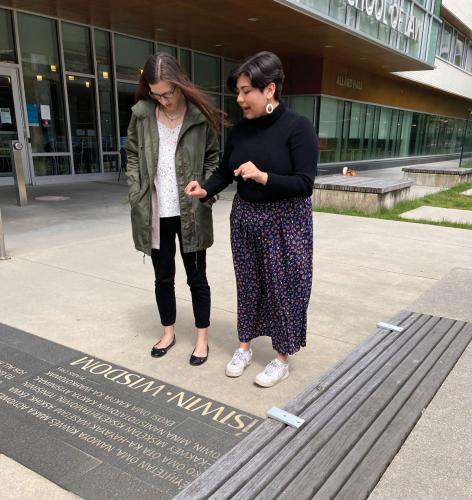 Translated into English, the adjacent panel says: Realize that we as human beings have been put on this Earth for only a short time and that we must use this time to gain wisdom, knowledge, respect and the understanding for all human beings since we are all relatives.

Translated into English, the adjacent panel says: Realize that we as human beings have been put on this Earth for only a short time and that we must use this time to gain wisdom, knowledge, respect and the understanding for all human beings since we are all relatives.

The United Nations declared 2022 the beginning of the Decade of Action for Indigenous Languages. This was in part to encourage action that was called for in the organization’s 2007 Declaration on the Rights of Indigenous Peoples, which stipulates that Indigenous peoples have a right to use their languages without threats of harm. Colonial threats to Indigenous languages began long before this, however.

In 1492, Christopher Columbus wrote in his journal that he will bring to the Spanish monarchs six “Indians” from the Americas so “they may learn to speak.” With a stroke of his pen, Columbus denied these Indigenous peoples the human capacity for language. This would be echoed by Shakespeare in his “The Tempest,” an early 1600s play in which an island inhabitant, Caliban, is taught to speak and make his thoughts known in English. Caliban’s famous response is “You taught me language, and my profit on’t is I know how to curse.”

As a young child growing up during the 1950s on the Wolastokwi lands of the Wabanaki Confederacy in Maine and New Brunswick, Canada, I only spoke Maliseet, the Indigenous language of my Wolastokwi people. As I did not speak English when I started attending grade school, I felt the pain of silence, the crisis of alienation and the fear of the unknown. Since that first day of school, like Caliban, I learned to curse in colonial languages (mostly English and sometimes French). The names in my ancestral home of Wabanakiw were overwritten by colonial names such as New Brunswick, Perth, Andover and the Saint John River. These names are daily reminders of the injustice of linguistic imperialism.

Today, the great majority of at-risk languages are Indigenous. Linguists are warning us that from 50 percent to 90 percent of the world’s languages will become extinct by the end of this century. The consequences of such loss would be massive. Language is not just a code for communication. As these languages are endangered, so are their integrated cultural worlds of knowledge.

Indigenous knowledge is increasingly important for all the world’s populations, particularly as we all face the impacts of climate change. Many scholars are looking to Indigenous languages for insights into how we can live in ancestral landscapes as stewards instead of rapacious agents of resource exploitation. In fact, linguistic injustices against Indigenous peoples forced many communities to find ways to survive 500 years of climate change. The colonial transformation of ancestral landscapes by introducing invasive species, pathogens and colonial concepts required Indigenous languages to adapt to these forms of erasure. Indigenous languages and cultures have shown resilience and continuity across many domains of language and cultural change. These communities have important lessons to share.

Encouragingly, many of the experts who have identified this global linguistic crisis are also finding ways to mitigate it. For example, in recent years we have seen the reintroduction of Indigenous placenames in ancestral landscapes, such as the changing of Mount McKinley to Mount Denali in 2015. Institutions have also begun to incorporate signs in Indigenous languages. I have the honor of teaching at the University of British Columbia, which is located on the ancestral and unceded territory of the Musqueam people in what is now Point Grey in Vancouver. This university has introduced bilingual signage in English and hən̓q̓əmin̓əm̓ on the campus to pay respect to this ancestral language of the Musqueam.

Cultural institutions such as museums are also playing an important role in honoring Indigenous languages. Exhibitions offered in multiple languages can create experiential spaces where Indigenous worlds can be shared with a wide variety of visitors. The National Museum of the American Indian, for example, has featured Indigenous languages and Spanish in exhibitions, publications and signage.

We are also seeing hopeful signs of some languages thought to be extinct being revived. Linguist Daryl Baldwin of the Míamí Tribe of Oklahoma dared to change the metaphor of language death or extinction to the term “language awakening.” This important shift in thinking allowed him to imagine the possibilities of bringing back the Míamí language. In 2016, the MacArthur Foundation awarded Baldwin a fellowship for “restoring the linguistic, cultural and intellectual heritage of the Myaamia (Míamí) Nation to its present-day descendants.”

Linguists have long argued the Wômpanâak language of the Wampanoag people of coastal Massachusetts extinct. Yet in 2010, Wômpanâak linguist Jessie Little Doe Baird received the MacArthur Fellowship for “reviving a long silent language.” In 2020, Baird was selected as one of USA Today’s Women of the Century for reclaiming her ancestral language.

The integration of language, culture and intellectual heritage are important steps toward addressing the injustices many Indigenous peoples have faced. Yet we all must work harder to take the next step. Rather than just translating one language into another, we need to learn how to properly pronounce Indigenous words and phrases as well as to understand their full meanings. To truly comprehend, we need to be able to have opportunities to fully experience and appreciate Indigenous cultures. We are at a pivotal moment, when the knowledge of Indigenous worlds can provide paths toward social and language justice for all.

Bernard Perley (Maliseet from the Tobique First Nation) is an anthropologist, language advocate and professor of First Nations and Endangered Languages at University of British Columbia’s Institute for Critical Indigenous Studies in Canada.