Oglala Lakota artist Emil Her Many Horses says his uncle inspired him to create this scene entitled “Honoring Our Lakota Vietnam Veterans.” U.S. Army veteran Charles Pablo (Oglala Lakota) served three tours of duty in the Vietnam War. His traditional name Takuni Kokipe Sni translates to “Afraid of Nothing.” Before Pablo’s last tour, his young nephew—who was soon to be old enough to be drafted—asked him why he kept going back. He responded, “So you don’t have to.” 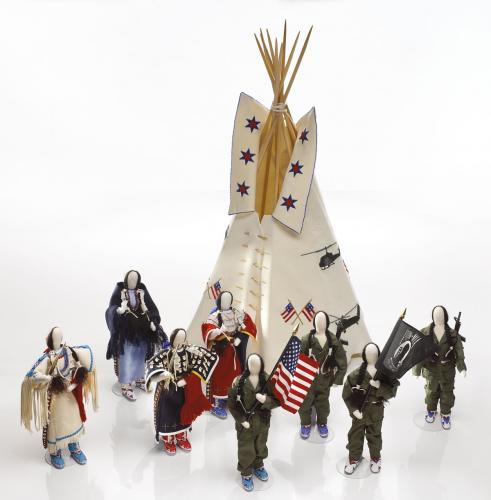 The Vietnam War was known as the “Helicopter War” because during it, thousands of these aircraft were used to bring soldiers to the battlefield or evacuate wounded. Her Many Horses, a National Museum of the American Indian curator, says that Lakota warriors tended to paint battle or horse-raiding scenes on their tipis as a way of marking their accomplishments. So in this scene, the tanned-deer-hide tipi is decorated with beaded military helicopters as well as American flags, stars and an eagle on the back.

The four soldiers are wearing cloth military uniforms and glass-beaded moccasins. They carry a U.S. flag, a POW flag (to honor prisoners of war) or rifles. The four female dolls are wearing traditional Lakota dresses that are made of wool or hide and are decorated with brass and silver beads, dentalium shells, beaded necklaces and moccasins, and plastic elk teeth. A great number of elk teeth on a woman’s clothing would show that her husband was a great hunter.

Her Many Horses says that according to Lakota tradition, if a family member was in the military or accomplished a notable deed then his or her female relatives had a right to acknowledge that deed by waving a fan or white handkerchief. In this artwork, two of the four women are carrying fans made of feathers and the others are waving white handkerchiefs to welcome the men home.

Many Vietnam veterans were never acknowledged for their service or “didn’t get a great welcome home,” Her Many Horses says. “I did this scene to honor them.”

The work won the Governor Janklow Best of Show Award at the 2002 Northern Plains Tribal Arts Show. It became part of the NMAI collection in 2003.