True Native New Yorkers: Connecting to Community and Each Other, Even in a Crowd

Walking into a deli in Harlem in 2019, Comanche and Kiowa model Phillip Bread was greeted by the man behind the counter who exclaimed, “Man, you are an original!” The young model does evoke some of this country’s first inhabitants. His long black hair is often braided and his clothing and accessories are a mix of contemporary and traditional American Indian styles. When his grandfather told Bread he resembled Comanche warriors of the past, it inspired him. “I am a continuation of them,” he says. “They live through me.” But not all Native New Yorkers are so readily acknowledged.

More than half of New York’s Native population lives in New York City, making it potentially the largest urban Indigenous population in the United States. Yet the U.S. Census Bureau estimates those who identify themselves as American Indian or Alaska Native are only about 1 percent and Native Hawaiian and Pacific Islanders are a mere .1 percent of New York state’s nearly 19.5 million people.

While some who live or work in the New York region have found ways to maintain a connection to their Indian culture, many Native New Yorkers who are miles away from their communities can feel alone, if not invisible, in the crowd. Nevertheless, many are showing that Indigenous people have been and continue to be strong pieces of the multicultural fabric of this diverse state. 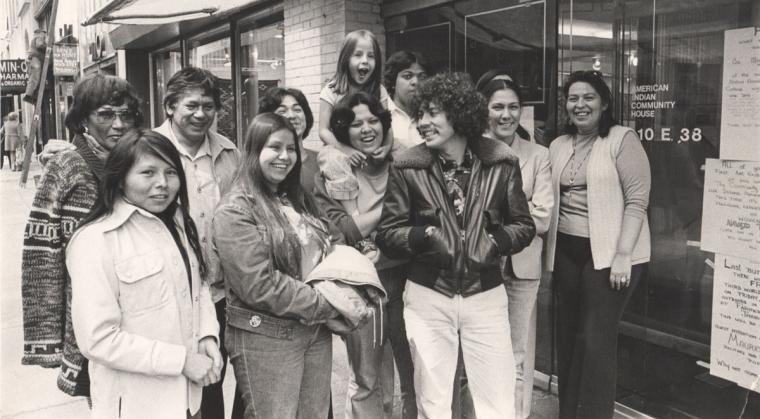 During the late 1970s, staff and visitors gathered outside the American Indian Community House on 38th Street in Manhattan, one of its many locations during the past five decades. Executive Director Rosemary Richmond (Mohawk of Akwesasne) stands next to the organization’s sign.

During the late 1970s, staff and visitors gathered outside the American Indian Community House on 38th Street in Manhattan, one of its many locations during the past five decades. Executive Director Rosemary Richmond (Mohawk of Akwesasne) stands next to the organization’s sign. 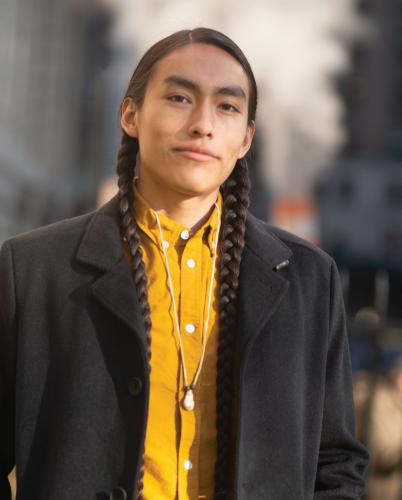 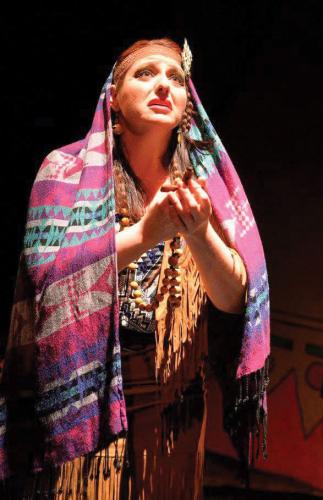 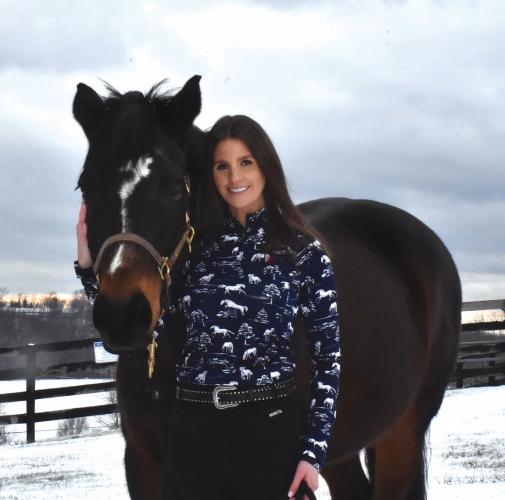 Monica Buckle (Cherokee) at the Pegasus Therapeutic Riding school in Brewster, New York, where she helps youth with disabilities and adults with other challenges learn to ride.

Monica Buckle (Cherokee) at the Pegasus Therapeutic Riding school in Brewster, New York, where she helps youth with disabilities and adults with other challenges learn to ride. 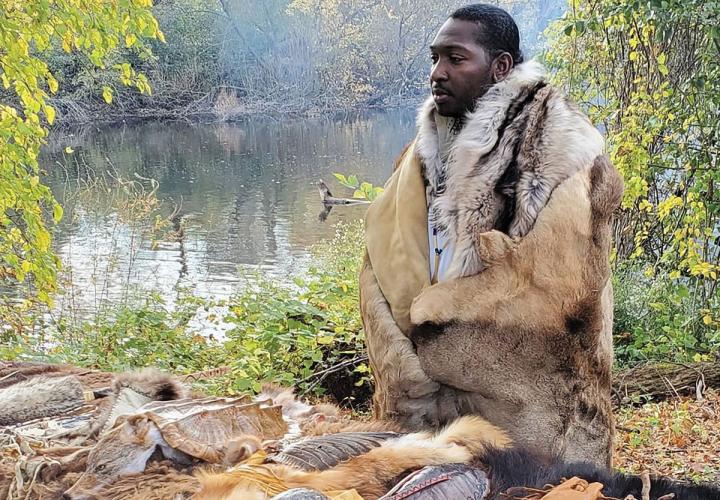 Rodrick Bell, wearing wolf and elk hides beside the Bronx River, talked about his traditional Powhatan culture at the “Reflections of the 16th Century” event held in November 2019 at the Bronx Zoo in New York.

Rodrick Bell, wearing wolf and elk hides beside the Bronx River, talked about his traditional Powhatan culture at the “Reflections of the 16th Century” event held in November 2019 at the Bronx Zoo in New York.

A Home Away from Home

During in the 1920s, Mohawk ironworkers began traveling 400 miles from their reservations in northern New York and Canada to construct buildings in New York City. Some decided to forgo the long journey and eventually established families in Brooklyn. As the number of Native people in New York City grew and dispersed throughout the region, so did their need for resources and to connect to each other.

In 1969, Mifawnway Hines (Pawnee/Otoe), Louis Mofsie (Hopi/Winnebago of Nebraska), Charmaine Lyons Shenandoah (Cherokee/Monacan), Oren Lyons (Onondaga) and Mary Helen Deer Smith (Kiowa/Muskogee Creek) founded the American Indian Community House in Manhattan to help Native people obtain health and other social services and to foster Indigenous culture and community. Whether hosting a regional powwow or a dinner for a few elders, the Community House has always been “a home away from home,” says AICH Board Member Lance Richmond (Mohawk of Akwesasne).

Lance Richmond’s parents, David and Rosemary Richmond (Mohawk of Akwesasne), moved to State Street, the center of the city’s Mohawk community, in 1975. Soon after, they began working at the AICH, which was then on 38th Street in Manhattan. Rosemary would go on to serve as its executive director for more than 35 years. Lance was frequently by her side.

AICH has been bumped from location to location in the city over the years with varying degrees of space, from having a large gathering hall and art gallery near Broadway to one floor in its current location in lower Manhattan’s China Town. Yet it has always served the region’s Native people.

One of its more unique programs is its Healthy Elders Network, which helps Indigenous people over 50 who are living with HIV/AIDS get the information they need. This is vital for this rarely recognized Native population.

Being recognized matters, says Richmond. The results of the U.S. census can influence the distribution of state resources. Community members living in remote areas and decades of government suspicion has contributed to what many believe is an underestimation of the state’s Indigenous population. Because of the COVID-19 pandemic, the 2020 census had to be completed online, which could have been prohibitive to some without access to the Internet. Last year, AICH launched an information campaign to encourage Indigenous people to participate in the 2020 census. “The more we get counted, the more attention and services we might receive, and the more we will have a voice going forward,” Richmond says.

One way that AICH has increased the visibility of Indigenous culture is to share it with non-Native visitors. May through October, it offers public programs ranging from art shows and markets to traditional music and dance at a building on Governors Island.

“Part of our problem is most people in New York think Native Americans died 100 years ago,” says Richmond. “We are showing them there are still Native people in Manhattan. They are still alive and doing well.”

Danielle Soames is a star example. She spent her early childhood in Manhattan with her Mohawk mother and Jewish father. Not until she visited her Mohawk family in Kahnawake, Quebec, as a teenager, however, was she truly awakened to her Indigenous culture. She learned a lot about her ancestry, including that her great-grandfather, grandfather and uncle were all ironworkers. “I really felt a great kinship with my family,” she says.

She eventually returned to Manhattan in 1995 to Theater Intensive Program at Circle in the Square Theater School and later received her master’s degree in Educational Theater from New York University, graduating with honors. A whirlwind of energy, she has since written and performed in a number of plays, many of which counteract what people often perceive to be Indian. “Breaking stereotypes is a huge mission of mine,” she says. “There is no outline of what is Native art and what is a Native actor, so there is a lot of room for growth and a lot of space to be filled.”

Although she has played non-Native people, Soames says, “the Native roles hit home. There is a specific voice that I could give to that character that could be stronger because of my own experience.”

She is now a repertory ensemble member of Safe Harbors NYC, an Indigenous theater group that, through the New York Theatre Workshop, recently presented its second annual “Reflections of Native Voices.” This two-week festival features theater, music and dance performances by Indigenous artists from across the country and Canada. To reduce the spread of COVID-19, this year’s performances were filmed so they could be shown virtually. For the festival, Soames directed and helped edit a play called “Este Cate,” which presents stories that attempt to counter the common perception that Native people are static.

Monica Buckle has also done much to further Indigenous art. A member of the Cherokee Nation, she spent summers in Oklahoma with her extended Native family. “My grandmother had a beautiful art collection and I inherited the bug,” she explains. Today, Buckle serves as a consultant for museums and other cultural institutions about Indigenous art collections and promotes Indigenous traditional and contemporary artists through virtual webinars and museum events. “It is not so much work,” she says. “I feel like this is what I have to do. It feels right.”

Recently, Buckle has had an opportunity to combine her passion for Native art with her love of horses at the Pegasus Therapeutic Riding school in Brewster, New York. There she works with disabled children and adults overcoming challenges, including veterans. To teach about the close relationship many American Indian tribes have with their horses, she demonstrated how they paint their horses with handprints and other imagery. Buckle says the psychological boost the program gives to the riders is amazing. “It is just unbelievable seeing the transformations of the children,” she says.

Rodrick Bell learned about his Southeastern Indigenous roots from the oral histories his family told. His Powhatan grandparents moved to the Bronx in the 1960s to escape segregation in the South. They had a barbecue restaurant in North Carolina where he says, “the lighter-skinned relatives could work in the front but the darker-skinned relatives had to work in the back.” Bells’ family members rarely talked publicly about their Powhatan ancestry, but at home he listened to stories they told, ate traditional foods and was surrounded by objects that reflected his Native heritage. When he attended school, he found it easier to pass as Black than to explain his Indigenous background. “I felt a minority within minorities,” he says.

Still, his grandmother assured him that “such labels are a distraction from the true reason we are here. Whether we are black, white or red, we are Indigenous to the soil. We all have a purpose: to be stewards of the land and pass it on to the next seven generations better than when we found it.”

He has taken this advice to heart. He currently leads educational canoe trips for the Bronx River Alliance, an organization working to restore the health of the river. Having fully embraced his Native ancestry, he educates people in his community not only about the need for clean water but the connection the Indigenous people who lived in the region had to the river. “The canoe journeys help people reestablish a relationship to the natural world around them. Helping to protect and restore the environment can inspire us to live healthier, fuller lives. That is what we are all working toward.”

Connecting During a Pandemic

Losing a connection to land is a common challenge for the Indigenous people who find themselves living in a cityscape. Phillip Bread began his modeling career as a teenager wearing Native designers’ apparel in the Santa Fe Indian Market Fashion Show in New Mexico. In fall of 2019, Bread signed with the DNA Modeling Management and moved to New York City. By that winter, the young man was modeling for Ralph Lauren.

Growing up in the Plains of Oklahoma, Bread was out of his element alone and surrounded by skyscrapers. “I was so shocked how much everything was manmade,” he says. He lived in the city for only about six months before COVID-19 hit and everyone began to isolate in March 2020, so he was not able to find and socialize with many other Native people. He now lives in Sante Fe, New Mexico, and although he continues to model, he doesn’t know when he will return to living in the city.

Since the pandemic began, the Community House has continued to be a bridge to Native communities. AICH has been conducting programs and social events via Zoom and providing care packages to Indigenous residents, particularly elders, to limit their potential exposure to the coronavirus. This summer, the organization plans to once again open its doors at its location on Governors Island. Richmond says AICH can be a place for all New Yorkers to find each other and recharge. “We all have that need,” he says.