Just about 40 miles north of the Smithsonian’s National Museum of the American Indian in Washington, D.C., on the banks of the Patapsco River, lies Baltimore, Maryland. This city of more than 600,000 people is known for its red-brick rowhouses with marble steps, steamed crabs and a distinctive accent which notably features what linguists refer to as a “fronted o” (locally pronounced “ao”). This place is also known for the other “O’s”—the Orioles baseball team as well as the Ravens football team, being the final resting place of Edgar Allen Poe, being the birthplace of the Star-Spangled Banner and the setting for the HBO television series “The Wire.” Yet few know it is also home to a large urban American Indian community. 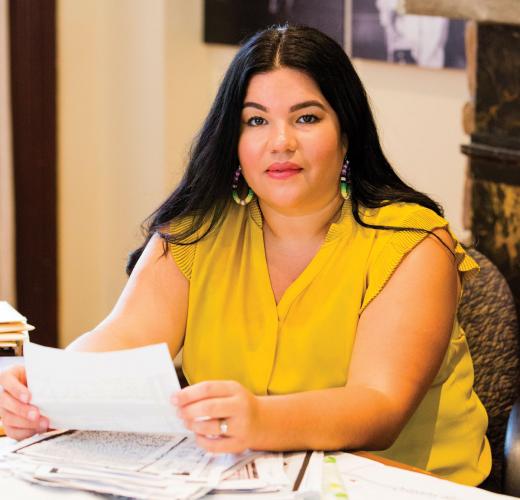 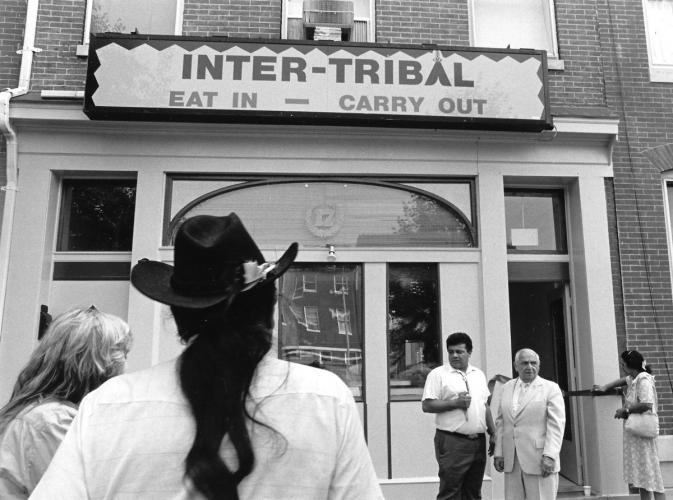 The Baltimore American Indian Center—co-founded by Elizabeth Locklear (Lumbee, far right) in 1968 and later led by Director Barry Richardson (Haliwa Saponi, third from right)—opened the Inter-Tribal Restaurant at 17 S. Broadway in 1989. It only lasted a couple of years.

The Baltimore American Indian Center—co-founded by Elizabeth Locklear (Lumbee, far right) in 1968 and later led by Director Barry Richardson (Haliwa Saponi, third from right)—opened the Inter-Tribal Restaurant at 17 S. Broadway in 1989. It only lasted a couple of years.

Baltimore is within of the ancestral homelands of the Piscataway and Susquehannock peoples, and a diverse range of other American Indians have passed through or lived here. In the mid-20th century, thousands of members of the Lumbee Tribe of North Carolina and other tribal nations migrated to Baltimore seeking manufacturing, construction and other jobs and a better quality of life. They settled on the east side of town in an area that bridges the neighborhoods of Upper Fells Point and Washington Hill. Here, they created a vibrant, intertribal American Indian community that they affectionately referred to as their “reservation” in its heyday. Hal Hunt Sr. (Lumbee Tribe of North Carolina), who moved to the city in 1956, said, “When these Indians came from North Carolina, they looked for Baltimore Street. That was ‘the reservation’.” Because so many Indians made this their home away from home, it became a safe haven and a space of autonomy for them in the context of greater Baltimore, where they were, and are still, neither expected, recognized or understood.

Beginning in the late 1960s, due to a complex set of factors ranging from upward mobility and civil unrest to urban renewal and gentrification, most American Indian people moved away from this area. It continues to transform. Recent generations never experienced “the reservation,” and most Baltimoreans are surprised to learn it ever existed or that there is an American Indian population in the city at all.

Members of Baltimore’s Indian community neither see themselves represented in formal histories nor popular narratives of this place, though they continue to contribute to its cultural fabric and physical landscape. That’s why even though Baltimore is the only home I’ve ever known—and it is an integral part of my identity (I even have the accent)—as a Lumbee person, growing up here could be strange. It seemed the only spaces other than our family homes where people didn’t question my identity were the few remaining community institutions in the old neighborhood: the Baltimore American Indian Center and South Broadway Baptist Church, both still open and active, as well as the Vera Shank Daycare / Native American Senior Citizens Center, which closed in 2017. When I was a young visual artist, I created several bodies of work about this phenomenon. I have since tried to make sense of it through advanced academic study and now as a curator.

In 2016, I tested an early version of a walking tour of the historic heart of Baltimore’s American Indian community in the eastern side of the city on a museum studies class. The tour was intended to be very brief; I had only planned to include these three stops, all within a one-block radius. It ended up being much longer because Linda Cox, a Lumbee elder who consulted on the project and was with us pointed out places of significance to the Baltimore Indian community that even I had no idea existed. Cox, who moved here in 1968, remembers “All the Indians were in East Baltimore. . . . It looked like people that you could relate with, that looked like you and was part of you.”

We began at South Broadway Baptist Church, present-day home of the oldest church congregation established by American Indian people in Baltimore and the original location of the Baltimore American Indian Center (BAIC), founded as the American Indian Study Center in 1968. En route to the current site of the BAIC just a block away, Cox stopped in front of El Salvador Restaurant next door to the church, where I had eaten many a “platillo de carne asada,” and where I had intended to return with our guests after the tour for lunch. “Don’t you want to tell them about the Indian store that used to be here?” she asked. I was dumbfounded. That store, the Hokahey Indian Trading Post, was gone six years before I was born.

This moment inspired a long and ongoing process of convening my elders, mining archives near and far, walking and mapping the neighborhood to reconstruct East Baltimore’s historic American Indian “reservation.” It had not previously occurred to me that with anywhere from 2,000 to 7,000 Indians living in the neighborhood when our community’s population was at its peak, we would have had more than a church, the Indian Center and a daycare. We have since identified about 50 sites once part of the community, including more churches, stores, bars, restaurants and, of course, homes.

In 2021, we developed and released a print guide to the "reservation,” a website describing highlights of the neighborhood (baltimorereservation.com) and a Guide to Indigenous Baltimore app that can guide you as you walk or drive through the area or offer you a virtual tour. Created in collaboration with Elizabeth Rule (Chickasaw), who is an assistant professor of Critical Race, Gender and Culture Studies at American University, the app is available for free on both Apple and Google platforms.

These resources are helping bring Baltimore’s American Indian history and living heritage to light. Most importantly, American Indian youth in Baltimore now have resources they can point to that are representative of their particular cultures and history in this place. Cox said of the project, “Our kids will have something that they can actually be very, very proud of.” Through this work, we are changing the way people think of Baltimore and American Indian people. As Cox says, “We are here! We’re not going anywhere.”

Ashley Minner (Lumbee Tribe of North Carolina) is a visual artist and assistant curator for History and Culture at the National Museum of the American Indian.