The Tohono O'odham and the Border Wall

"There's No O'odham Word for Wall." This is the title of a video released by the Tohono O'odham Nation in southern Arizona this February explaining its opposition to the proposed U.S.-Mexico border wall. The traditional lands and population of this federally recognized American Indian tribe, located in the Sonoran Desert, extend well into Mexico. A border wall would cause it great environmental, spiritual and cultural harm. 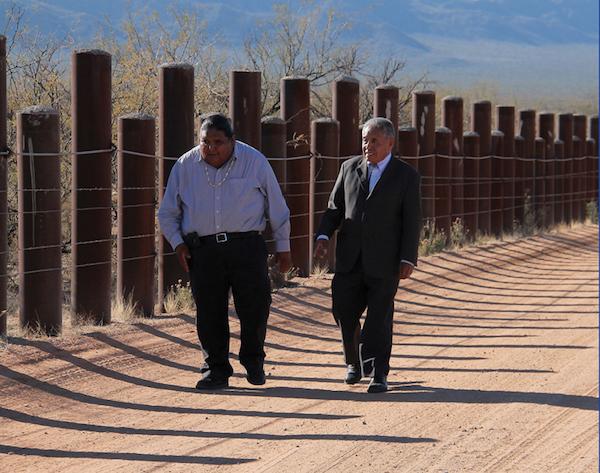 The Tohono O'odham reservation is 2.8-million acres with 62 miles along the international border, but the Nation's ancestral lands stretched north from the Gila River of present-day Arizona and south to the Sea of Cortez in northern Mexico.

In 1853, the Gadsden Purchase established the current southern border. The United States purchased a 29,670-square-mile area from Mexico, which became the southern part of Arizona and New Mexico. The treaty did not take into account existing indigenous territories and split the Tohono O'odham Nation in two. Currently, the Nation has 34,000 enrolled members with more than 2,000 members residing in the Sonoran state of Mexico.

The video responded to the President's January 25th executive order to increase border security and immigration enforcement through "the immediate construction of a physical wall on the southern border." Chairman Edward Manuel stated at the outset that the Nation already protects the border region, working in cooperation with U.S. Immigration and Customs Enforcement, the Federal Bureau of Investigation and the Border Patrol. Along with providing tribal funds for border protection, the Nation added vehicle barriers. According to the Tohono O'odham Nation's Department of Public Safety, the number migrant apprehensions have dropped by 84 percent since 2003.

In addition to an overview of existing border security, the video describes the potential ecological damage from the proposed wall. Farmers and ranchers living near the border rely on water sources located on the Sonoran side. Likewise, a wall would disrupt the natural flow of rainwater washes and animal migrations along the border. The cultural and human impact would also be severe. As many tribal members are Catholic, each year Tohono O'odham make a spiritual pilgrimage to the town of Magdalena in Sonora to pray to and touch the statue of St. Francis, their patron saint. Tribal members visit relatives on the Mexico side daily, and there are sacred sites and cemeteries located in Mexico as well. The ratification of the Gadsden Purchase never stopped the Nation from maintaining relationships with members on both sides.

The Tohono O'odham Legislative Council issued a resolution on February 7 in opposition to the wall on its border. Nation Vice-chairman Verlon Jose emphasized that a wall "is not the answer to securing America...we believe that what is effective is cooperation, continued cooperation and working together. When you talk about homeland protection, homeland security, these are our homelands and we want to protect [and] secure them." The Tohono O'odham Nation has invited President Donald Trump to visit their lands and see their approach to border security.