The 45th Infantry Division has an illustrious history, in both warfare and American popular culture. American Indians figure prominently on both fronts.

The Division was organized in 1923 as the National Guard for Oklahoma, Arizona, Colorado and New Mexico. It was called up for federal service in 1940 and faced intense combat in Sicily, Italy, France and Germany. General George S. Patton called it one of the very best fighting units in the United States Army. 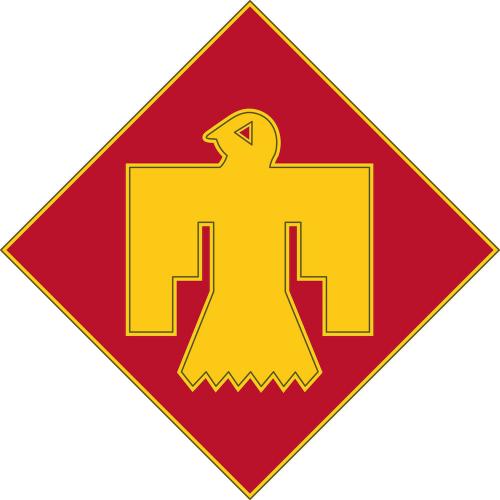 Thunderbird patch: Each side of the square represents one of the four states – Oklahoma, Colorado, Arizona and New Mexico – whose National Guards formed the 45th Infantry Division. The colors reflect the Hispanic heritage of those states. After holding an art competition, the Division adopted in 1939 the thunderbird motif, designed by Kiowa artist Woody Big Bow (1914–1998). Image courtesy U.S. Army.

Thunderbird patch: Each side of the square represents one of the four states – Oklahoma, Colorado, Arizona and New Mexico – whose National Guards formed the 45th Infantry Division. The colors reflect the Hispanic heritage of those states. After holding an art competition, the Division adopted in 1939 the thunderbird motif, designed by Kiowa artist Woody Big Bow (1914–1998). Image courtesy U.S. Army. 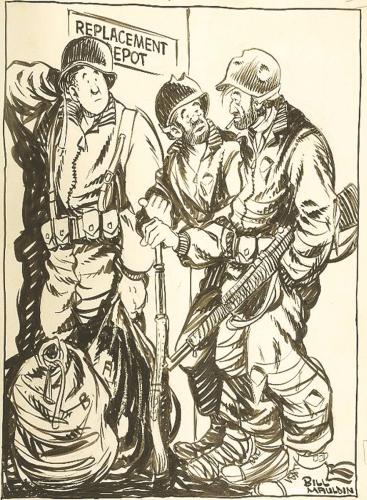 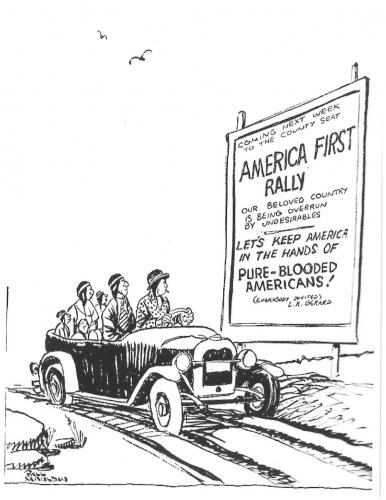 Encompassing many tribal homelands, its ranks included many American Indians, as well as cowboys, and the Division was always conscious of its Native heritage. According to the 45th Division history, “For the first 15 years of its existence, members of the 45th Infantry Division proudly wore on their left shoulders an ancient American Indian symbol of good luck,” as recognition of the great number of Natives who proudly served in it. The four-armed yellow insignia on a square background of red had deep roots in the Native southwest, but, in a nasty case of cultural misappropriation, the rising Nazi Party of Germany adopted the symbol for its standard, the swastika. The U.S. Army abandoned the shoulder patch in the 1930s and, after a competition, replaced it with another Indian symbol, the Thunderbird. The 45th was now known as the Thunderbird Division.

American Indian soldiers more than lived up to the name. Three of the handful of Congressional Medals of Honor that American Indians received in World War II were awarded to soldiers in the 45th: Ernest Childers, Jack Montgomery, an Oklahoma Cherokee and classmate of Childers at Chilocco Indian Agricultural School, and Van T. Barfoot, a Mississippi Choctaw.

The 45th prepared for war by training in Louisiana and at Fort Sill, Okla., Camp Berkeley, Texas, Fort Devens, Mass., Pine Camp in New York and Camp Pickett in Virginia. On July 10, 1943, it participated in the invasion of Sicily. For the 511 days to the end of the war, the Division made amphibious landings, at Massena, Salerno and Anzio, and fought its way through Italy, France and Germany. On April 29, 1945, the 45th Division liberated Dachau Concentration Camp, and directly witnessed the horrors inflicted by the Nazis in the “Final Solution.”

The 45th Division also made a lasting contribution to American popular culture. Among its famous recruits was Bill Mauldin (1921–2003), the cartoonist who later won two Pulitzer Prizes. Just 18 when he joined the Arizona National Guard in 1940, Mauldin began drawing one-panel cartoons for the 45th Division News, featuring two haggard, unshaven G.I.s, Willie and Joe. In 1943, the cartoons were picked up by Stars and Stripes, the famous independent newspaper for the entire U.S. Army, and Mauldin’s soldiers became the face of the American fighting man.

Less well-known is that Mauldin modelled Willie after a Choctaw friend and mentor, Sgt. Rayson Billie (1912–1989). According to Mauldin’s biographer Todd DePastino, “Rayson Billey was the biggest, meanest soldier you could imagine, and yet he was also one of the most educated, intellectual men Mauldin had ever met.” The sergeant taught Mauldin the ways of army life, but he also encouraged Mauldin’s cartooning. Billie introduced Mauldin to the works of the English artist William Hogarth (1697–1764) and the French caricaturist Honore Daumier (1803– 1879). Mauldin had never gone to college, but Billie, the Choctaw career soldier, had taken a course on pictorial satire at the University of Oklahoma. Mauldin went on to become a Pulitzer Prize-winning political cartoonist, but, says DePastino, Billie remained a hero throughout his life.

Our thanks to Michael Gonzales, curator of the 45th Infantry Division Museum, Oklahoma City, Okla., for additional research.

The Editors of American Indian Magazine