They Also Served: American Indian Women in the War of 1812

Some of the most famous members of the Haudenosaunee (Iroquois) Confederacy fought on opposing sides during the War of 1812, a conflict that proved, much like the American Revolution, to be another disastrous civil war for Six Nations people. What is not known about the war was the presence of Six Nations women in American military service. 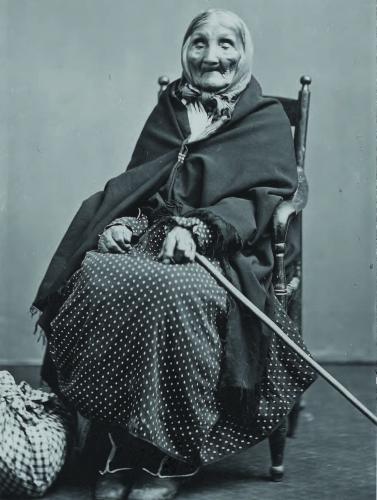 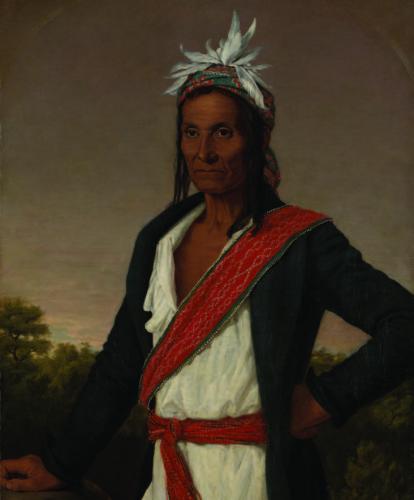 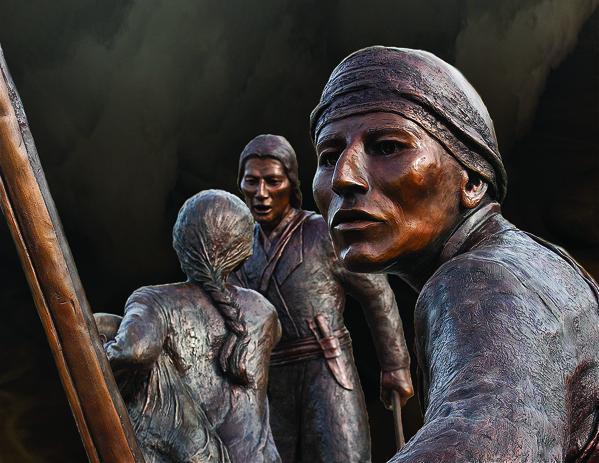 The Tuscarora Heroes Monument in Lewiston, N.Y., Susan Geissler, sculptor. On Dec. 19, 1813, the village of Lewiston faced a devastating assault by a joint British-Mohawk force which had just captured Fort Niagara. The only effective resistance came from local Tuscarora tribesmen, outnumbered by 30 to 1, who managed to divert the attack and escort dozens of villagers to safety. This monument was erected by the Historical Association of Lewiston for the bicentennial of the battle. Photo by William Carpenter, courtesy of Historical Association of Lewiston, Inc.

The Tuscarora Heroes Monument in Lewiston, N.Y., Susan Geissler, sculptor. On Dec. 19, 1813, the village of Lewiston faced a devastating assault by a joint British-Mohawk force which had just captured Fort Niagara. The only effective resistance came from local Tuscarora tribesmen, outnumbered by 30 to 1, who managed to divert the attack and escort dozens of villagers to safety. This monument was erected by the Historical Association of Lewiston for the bicentennial of the battle. Photo by William Carpenter, courtesy of Historical Association of Lewiston, Inc.

In 1985, while undertaking research for several publications on American Indian military history, I found references to Native women who participated in the War of 1812. These women were classified as “cooks” in the pension records of the War of 1812. Yet, it should be noted that Haudenosaunee women had fought in combat and did participate in supply capacities in the American Revolution. According to historian Barbara Graymont, Dolly, the wife of Oneida war hero Captain Honyere (Han Yerry Tewahgaraahken, also known as Doxtater) fought alongside Oneida warriors at the Battle of Oriskany, “using her gun to good advantage. When her husband became wounded in the right wrist, she loaded his gun for him and continued to fire her own gun when not busy assisting her husband.” With the heavy combat on the Niagara Frontier during the War of 1812, it is not far-fetched to suggest that Iroquois women were more than “cooks” during the war. The presence of one extraordinary woman in particular, Dinah John, also suggests something else.

Arthur C. Parker, the noted museologist of Seneca ancestry, claimed that 15 Native women, from New York served in the War of 1812. According to records in the New York State Archives, five of these women or their families received military pensions for officially serving as “cooks”: Polly Cooper, Susan Jacob(s), Dinah John, Julia John and Dolly Schenandoah (there are at least five other spellings of the latter’s surname: Skanandoah, Scanandoa, Scananadoah, Schanandoah and Skenandoah).

Polly Cooper, perhaps a relative of the legendary Oneida heroine of the American Revolution who had the same name, enlisted as a 31-year-old for three-months’ service in September 1813, in a regiment of “Indian volunteers” headed by Captain Peter Elm under the overall command of Seneca Chief Farmer’s Brother. Later, in 1857, she sought $53 compensation for a hat, one pair of leggings, one dress, two blankets, one pair of moccasins and one neckerchief. In her request, she sought $22 in compensation for 400 miles of transportation, back and forth from the Oneida Reservation to the Niagara Frontier. Dolly Schenandoah, an Oneida aged 29, enlisted for three-months’ service in June 1813, in the same regiment of Indian volunteers. Later, after her death in 1837, Schenandoah’s relatives sought $38 compensation. They asked $10 for round-trip travel expenses for the 400 miles from Oneida to Buffalo, less than half the travel expenses filed by Cooper.

Julia John, a 25-year-old Seneca from the Allegany Indian Reservation, enlisted in December 1813, in a regiment of Indian volunteers headed by Governor Blacksnake, the noted Allegany Seneca Chief, under the overall command of Farmer’s Brother. Unlike the previous two women, Julia John enlisted for one-year service. She later sought $46 in compensation, but only $4 in round-trip transportation expenses for the 140 miles from Allegany to the Niagara Frontier, a much lower reimbursement rate than either Cooper or Schenandoah.

At least two Onondaga women also served, Susan Jacob(s) and Dinah John. Jacob(s), a 20-year-old Onondaga from the Buffalo Creek Reservation, enlisted for three-months’ service in a regiment headed by Ut-ha-wah, Captain Cold (Cole), the most eminent Onondaga chief at Buffalo Creek, under the overall command of Farmer’s Brother.

The most famous of these five women pensioners, Dinah John, was one of the most prominent Iroquois women of the 19th century. A leading Onondaga basketmaker and potter, she was one of the first Iroquois women depicted in portraiture. In 1876, Philip S. Ryder photographed her, and a painted copy of the print now hangs in the Onondaga Historical Association in Syracuse. Ryder’s popular photograph of this Onondaga centenarian was widely distributed throughout central New York. The image showed Dinah as a shriveled old woman, seated in her rocking chair with a cane in her left hand.

Widely known in the non-Indian world as “Aunt Dinah,” she was frequently mentioned in accounts of the period. Although she had no official birth certificate, Thomas Donaldson in his Six Nations of New York, a federal census publication of 1892, estimated the age of the Onondaga elder and described her extraordinary vitality: “Old Aunt Dinah, who died at the age of 107, on the Onondaga reservation, is kindly remembered by the citizens of Syracuse, as well as by her own people. After the age of 90, she walked seven miles to the city and back.” When she died on May 26, 1883, Iroquois and non-Indians both honored her, and, in July of the same year, they dedicated a five-foot limestone statue to her memory.

Dinah was born Ta-wah-ta-whejah-quan, “the earth that upholds itself,” at Onondaga in the late 1770s or early 1780s, and possibly as early as 1774. Some sources claim that she was old enough to remember Colonel Goose Van Schaick’s military expedition during the American Revolution that destroyed the Onondaga villages in 1779. Some also claim that as a child she met George Washington on the General’s trip to Rome, N.Y., in 1788. Either in the 1790s or in the early years of the 19th century, she married Thomas John.

In the summer of 1812, the Onondagas in central New York, allied with the United States since the federal Treaty of Canandaigua of 1794, joined in with the Americans against the British. Sadly, Haudenosaunee from New York found themselves facing off against British-allied Haudenosaunee from the Six Nations Reserve in Ontario. In the war, Thomas John served for more than two years in two different units, in Tall John’s company of New York Indians and with Ut-ha-wa’s company of New York Militia. He fought at three major battles – the battles of Chippawa, Fort Erie and Lundy’s Lane, in which he was wounded. His wife Dinah accompanied him for a part of his enlistment time.

When her husband returned from war, the Johns settled in their home, a one-and-a-half story house that was just south of the council house on the reservation. There she raised two children, a son named Abram and a daughter, Elizabeth Tallchief George. Along with her famous Onondaga contemporary and friend, Captain Samuel George, Wolf clan chief and keeper of the wampum, she was rooted in Onondaga traditions, but she understood that the world around her was rapidly changing. Later, after two decades of incredible persistence, she was finally able to secure a pension from the New York State Legislature in 1878 for her military service, just five years before her death. She was awarded an $8 per month pension as well as a lump sum payment of $400.

Her pension had been denied for more than 20 years by the Federal Bureau of Pensions since, among other reasons, she had refused to take an oath of allegiance to the United States. Like other sovereignty-minded Onondagas, her allegiance was first and foremost to the Haudenosaunee, although she considered her Native peoples allies of the United States and was willing to serve as a volunteer.

The Onondaga elder was able to navigate herself through both the Iroquois world and the white man’s space of Syracuse and beyond. Even though she remained an Onondaga conservative to the end of her life, she became “Aunt Dinah” to whites in central New York. She used her gentle demeanor, advanced age, gender and merchandising skills to win favor and sell her handicrafts in Syracuse’s central commercial district.

At a time when white civic leaders in central New York and Albany politicians were still labeling the Onondagas as “savages,” describing reservation life as “depraved” and urging the replacement of the traditional council of chiefs with an elected system, John became the noble exception, the vanishing “full blood,” the friendly native woman with artistic, entrepreneurial and social skills who was allowed to freely enter the white space of Syracuse’s downtown commercial center.

By 1880, when she became blind, infirm and housebound, her failing condition became major news even for the Syracuse newspapers. At the time of her death on May 26, 1883, Dinah John was anywhere between 99 and 109 years of age. In death, she remained true to her Onondaga ways. Her funeral procession went from a Syracuse funeral parlor directly to the council house, followed by the Methodist chapel and cemetery.