The Plague Apocalypse Is Us: After First Contact, Societal Collapse May Have Been Deadlier than the Microbes

They fell down so generally of this disease as they were in the end not able to help one another, no not to make a fire nor to fetch a little water to drink, nor any to bury the dead.

This is how William Bradford, a leader of Plymouth colony in what is now Massachusetts, described an outbreak of disease, possibly of smallpox, among an isolated band of Indians on the upper Connecticut River about 1630. It’s the too familiar story of a “virgin soil” epidemic devastating a Native population with no natural immunity. Although a handful of Europeans with immunity tried to help, Bradford estimated that 950 out of 1,000 Indians died.

But his account shows something more about the impact of the disease. It was not just, or even primarily, their illness that killed so many; it was the general social collapse that made mutual aid and convalescence almost impossible. A feature of these new disease outbreaks on a Native population with no previous exposure, was their sudden and universal spread. Almost no one was left strong enough to nurse the sick or even provide basic needs. In the words of Alfred W. Crosby in his 1976 seminal article “Virgin Soil Epidemics as a Factor in the Aboriginal Depopulation of America”: “The fire goes out, and the cold creeps in; the sick, whom a bit of food and a cup of water might save, die of hunger and the dehydration of fever; the seed remains above ground as the best season for planting passes, or there is no one well enough to harvest the crop before the frost.”

It is no wonder that so much of the New World was depopulated within a generation of first contact with Europeans. Just how many died is a controversial question depending on estimates of the pre-Contact population, but undoubtably many more Indians lived in the Americas when Europeans first arrived than 30 years later. 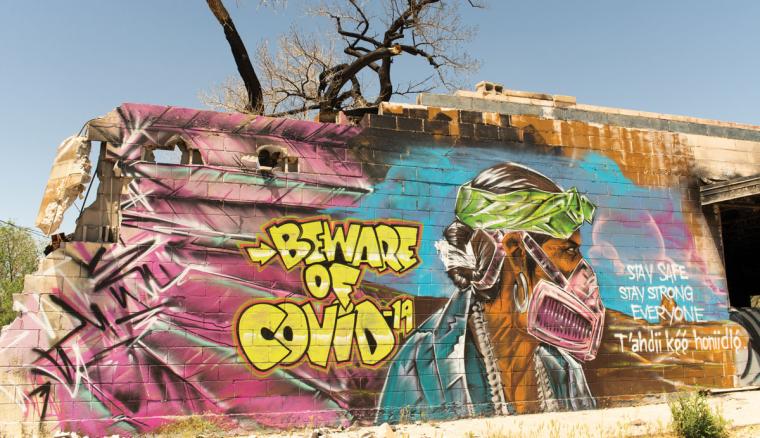 A mural in the community of Shiprock, New Mexico, on the Navajo Nation depicts a man in traditional dress wearing a respirator and warns residents about COVID-19.

A mural in the community of Shiprock, New Mexico, on the Navajo Nation depicts a man in traditional dress wearing a respirator and warns residents about COVID-19.

The COVID-19 outbreak has intensified already urgent questions about the Native lack of resistance to European disease. Recent medically based analyses have raised vigorous challenges to the broad-brush statement that the Native “lack of immunity” caused the rapid depopulation of the Indigenous Americas. David S. Jones of Massachusetts General Hospital in his 2003 article “Virgin Soil Revisited” disentangles the historians’ cliché. Was the lack of immunity innate, a genetic product of a failure of natural selection to produce a vigorous immune system in a largely disease-free continent? Or was it simply the absence of an acquired immunity that would have resulted from exposure to endemic disease?

The first theory of genetic failure was popular in the 1960s and 1970s. But this carries racial baggage, and it doesn’t fit a number of case studies. According to Crosby, white soldiers in the Civil War suffered the same mortality rate from smallpox as Native populations after Contact, and the death rate of Black Civil War soldiers from measles was not much less than among tribes emerging from isolation, like the Yanomami of Amazonia in 1968.

The medical critics charge that the historians’ simple conclusion ignores the deep complexity of human immune systems. It conflates the workings of different types of diseases, some of which might indeed have involved a genetic response, such as the sickle-cell anemia adaptation to malaria, whereas others, such as smallpox or influenza, haven’t been around long enough to trigger natural selection. Even the historical accounts are questionable. “Smallpox” is the catchall term for a number of different diseases, and a recent study argues that the first deadly epidemic after Columbus’s arrival in the Caribbean was actually a mutant strain of the flu.

Deadly epidemics followed almost everywhere the Europeans went, ranging from dreaded smallpox to what the settlers might have regarded as “children’s diseases” like measles and whooping cough. But the usual result was was drastic Native depopulation, from New England in 1618 to the upper Midwest in 1837.

Yet some of the most biting questions concern the aftermath. Why didn’t the Native populations recover in the generations after the epidemics, as Europe did after the bubonic plague? These are social questions, involving human conduct, not the implacable impact of microbes.

Andrés Reséndez offers one answer in his path-cutting 2016 book, “The Other Slavery: the Uncovered Story of Indian Enslavement in America.” He blames the catastrophic Native decline in the Caribbean on human intervention, specifically on the intensive Spanish slaving expeditions of the 1510s, when the colonists struggled to maintain their Indigenous workforces. He hazards the guess that “between 1492 and 1550, a nexus of slavery, overwork and famine killed more Indians in the Caribbean than smallpox, influenza and malaria.”

But Reséndez isn’t the first to see human fault as the force that not only worsened the impact of disease but that frustrated demographic recovery. David Jones points to widely varying outcomes, even for neighboring tribes. He cites factors like settlement patterns, warfare and destructive U. S. and Canadian federal Indian policies. Perhaps the most common element in these histories was malnutrition. The most obvious reason for abandoned Indian land was the influx of European settlement. When the Pilgrims built Plymouth on the site of Squanto’s (Tisquantum’s) vacant village of Patuxet, they didn’t consider the possibility that Wampanoag survivors might want to return to the land as the tribal population made a comeback.

Indian Country has clearly learned from these traumatic events. Although the population continues to be highly vulnerable, tribal governments and societies have been fighting the pandemic with their full range of powers. This issue presents an excerpt from the National Museum of the American Indian’s latest Developing Stories exhibition about the Navajo Nation’s response to COVID-19 (see p. 10). Notably, tribes across the United States have emphasized vaccination of elders to protect their language speakers and culture-bearers. In the early days of the coronavirus’s spread, Lakota reservations were remarkably uninfected, and many tribal governments, including those of the Diné and Lakota, imposed roadblocks to preserve their isolation. A protracted legal fight ensued between the Lakota and the state of South Dakota, which took a sharply different posture toward the pandemic. In the end, the Lakotas couldn’t escape the disease, but non-Indian South Dakota suffered the third highest infection rate in the United States and one of the highest in the world.

How other Indigenous peoples are faring as a result of the pandemic remains to be seen. The negligent response of the Brazilian regime has made that country an on-going epicenter of the disease. One fears the worst for the Native communities of Amazonia, where the self-isolating tribes are in danger of repeating the most severe experiences of first contact.

But the most hopeful lesson of this tragic history is that the worst does not have to happen. If human crimes and social breakdown have doubled and tripled the death toll from past diseases, less malevolent policies can at least prevent unnecessary mortality and hasten recovery.