A Talk with Pena Bonita

Pena Bonita (Seminole/Apache) grew up in New Mexico but she has made New York’s Lower East Side her home since the 1980s, where many other American Indian artists were living. An engaging, edgy and photogenic woman, she defies stylistic labels and embraces contemporary and traditional Native themes. Simultaneously political and aesthetically pleasing, Bonita’s art attracts fans across the generations. 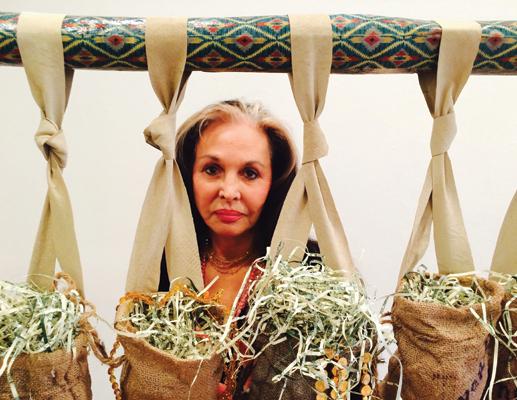 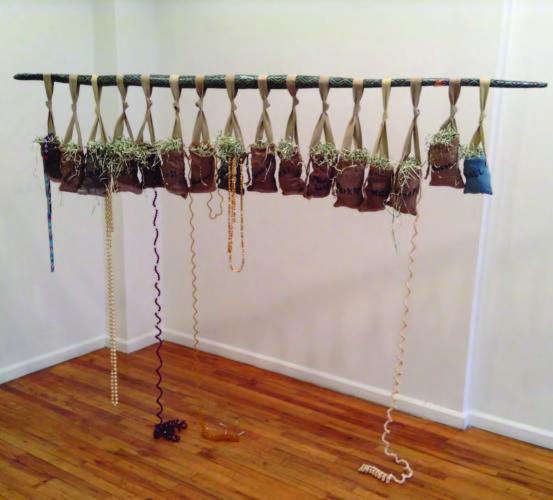 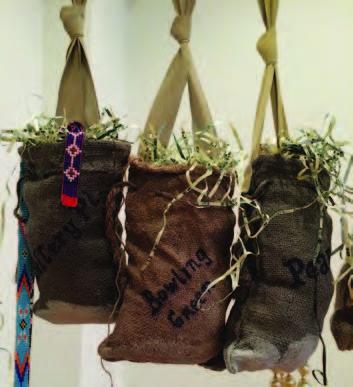 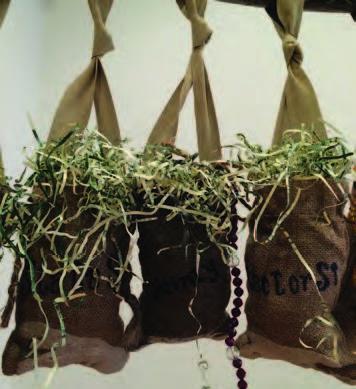 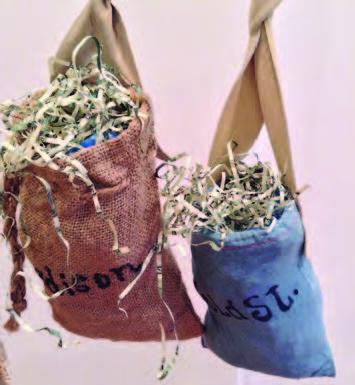 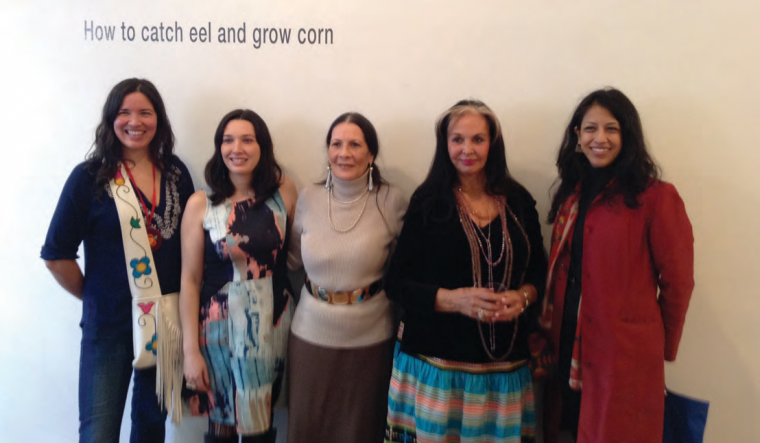 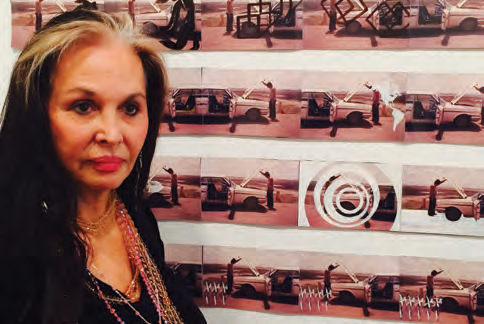 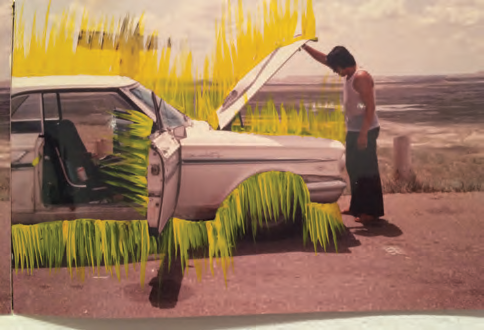 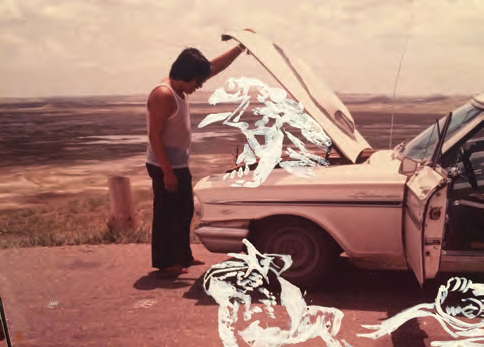 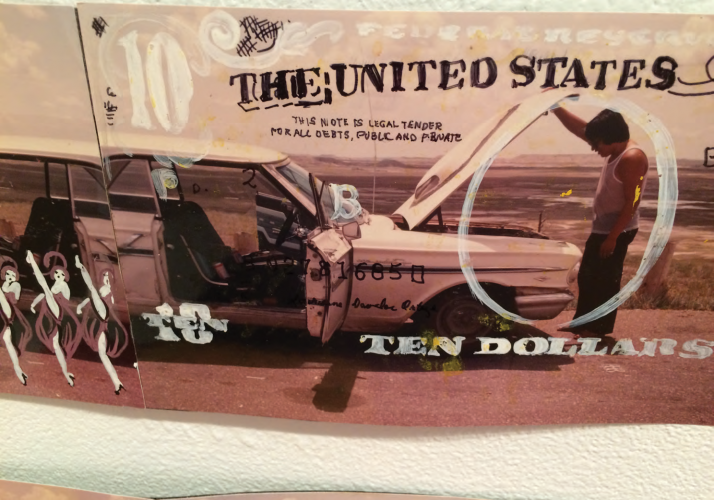 Detail of several segments from Stalled. Photo by Phoebe Farris

Detail of several segments from Stalled. Photo by Phoebe Farris

She participated this Spring in the group exhibition How to catch eel and grow corn at Kenkeleba’s Wilmer Jennings Gallery in New York City and we had a chance to talk about her life, art career and the current show.

Her installation Hanging Out On Iroquois & Algonquin Trails seemed to be a favorite with viewers. I asked her the significance of the title and the symbolism of the 16 burlap bags with street names from Lower Manhattan, held up by a sculpted snake.

“This piece was created just for this exhibit,” she replied. “For some time, I was employed as a licensed New York City tour guide on a double-decker bus. This taught me how little America’s tourists actually knew about Manhattan’s early history or the tribes that traded here long ago. I decided to create a piece based on the trade trails and the resulting changes in lower Manhattan as hills, streams and all the land was changed into flat areas of landfill by the Dutch, British and New Yorkers.

“It has been a costly change of landscape, lives and years of exfoliation on this once beautiful hilly island. Mohawks, Canarsie, Lenape, Ramapo and other tribes traded on what is now Broadway. Money enclosed in the hanging bags are references to the historical exploitation of New York and the current wealth that still profits from this historical exploitation.”

“The art subject offers an opportunity for meditation on this city’s cycles and offers a chance to reflect on our part in the city’s life.”

Her own trail to the New York art scene started with her childhood in New Mexico. “In most Native communities, being an artist is not uncommon. As a kid I cut out figures from the Sears & Roebuck catalogues,” she says. “Only scissors and crayons were available at the time.

“My earliest drawings took place on New Mexico sand hills using sticks or my fingers. My drawings and lettering were not always approved of because some of my first reference material came from a stop in a local gas station bathroom. My grandmother and aunts were shocked and made sure the drawings were blown away and that this never happened again. Yet they constantly told the story over and over.”

Her family and upbringing reflected very different Native traditions and customs, with very different values. “Mom came from a Christianized background in Oklahoma but it was still matriarchal,” she says. “She was a talented quiltmaker and made most of my dresses.

“My dad’s family was moved from Oklahoma Indian territory back to New Mexico when he was a tiny child. His folks’ social attitudes were oriented toward traditional ceremonies. My growing years often included living with aunts and uncles and grandparents as my mom and dad both had to often travel long distances to find work in California, Texas and other areas.

“It’s hard to say what most strongly influenced my development as an artist. Most of my family is talented in artistic crafts. My dad’s mother and sister were constant basket makers. My grandmother’s baskets are in collections of Caroline Poole and several museums such as The Southwest Museum in Los Angeles, Calif. Grandmother gave little credit or attention to this. She felt baskets should be used, and to put them on display was wasted effort. My aunt and my mom were constantly on the Singer sewing machine. The drawings my grandmother and aunt did were devoted to Sears & Roebuck pictures used to design dress patterns.”

Her own passion for art started on the other side of the easel. “In my late 20s a white friend who was a commercial artist used me as his drawing model,” she says. “Often I watched as he worked the drawings. It reawakened an obsession in me to do art. He encouraged me, gave me craft supplies and fostered a new confidence in my adventure into oil painting. He encouraged me to go back to art school.”

She started her formal art classes in commercial art at the New York City Community College in Brooklyn, “during the time when New York City colleges were tuition-free.

“I had to take remedial English classes but received a 4.0 grade average, which really surprised me. Two years of commercial art proved to me that advertising booze, cigarettes and pantyhose weren’t for me. I transferred to Hunter College to study fine arts. I went on to get my MFA from Hunter.

“My years at Hunter were often a contest of endurance. Most of my professors were male. Their standard question was, ‘How are we supposed to know what your art is about? It’s too Indian.’ My answer was, ‘Okay, look at my lines, colors and forms if you don’t want the art to contain references to religion, political issues or history.’”

Her artwork at Hunter reflected women’s liberation issues as well as Native political themes. “My early exposure to exhibitions came from women curators who were involved with showing women’s art with strong liberation themes,” she says. “My early work reflected these issues. At the time I was taking a welding class. My art pieces used materials such as pots and pans that I cut up, welded and painted, hung from ropes and nailed to the Cross. The art pieces were transported from Hunter in Manhattan to Brooklyn by subway where I lived. They received many strange reactions, though mostly positive from women.”

After completing Hunter she began to become established as a major artist with works in major collections. “My involvement in the American Indian Community House Gallery put my art into many New York City and international traveling exhibitions,” she says, some of which she has not even had a chance to see.

Many Native artists have inspired, encouraged and supported her, starting with the late R.C. Gorman, the Navajo printmaker. She recalls, “He advised me, ‘Pena, don’t get in a rut with your art! Do your own pathway and trust your own talent. Don’t let gallery owners rule your life!’

“Fritz Scholder was good at sending me books on art and letting me know what artists he thought I should go see at the Museum of Modern Art. He encouraged me to be impulsive. A Native woman painter who is one of my favorite artists to study, as her work is so beautiful, was Helen Hardin. Plus she was a New Mexico woman.

“Other Native artists that I admire are George Morrison, Bob Haozous, Kevin Red Star, Mary Morez, Darrell Vigil, Linda Lomahaftewa and Nadema Agard. This isn’t even beginning to name all the wonderful artists whose work I love. Plus a non-Native artist was Louise Nevelson whom I met at one of her exhibitions at a SUNY [State University of New York] College. I had for years been doing collages but wasn’t sure they were ever going to pass the muster. Her large collage work which is so impressive, so inspiring, helped me feel more comfortable and adventurous with odd-ball materials I can use in collages. I also love Judy Chicago.”

While pursuing her art career, Bonita managed to raise an active and artistically talented family. “Going to school and raising three boys was quite a challenge,” she says. “Thankfully all the boys love art. We created a photography darkroom in our hall closet, built our own drawing table and painted everything in sight. Our life was shaped by hardship but we deeply appreciated education, art and the opportunities Brooklyn offered.

“We lived across the street from the Brooklyn Museum, which at the time was free to public entrance. The boys attended free art courses offered there. We were privileged to study the touring exhibitions as well as the permanent collections. We returned over and over to see Van Gogh, Warhol, Norman Rockwell, the Hudson Valley painters and so many others. The guards knew us by name.

“Behind the Museum is the wonderful Brooklyn Botanical Garden, which we referred to as our front yard and where we buried our dog on the southwest corner, unknown to garden officials.

“My sons have been supportive of my creative efforts from their early years to this day. They are all talented in various arts, music and other media. They have been a great help to be able to ask, ‘What do you think of this?’ And to know good honest feedback will come from their perspectives.

“While I was in art school they were doing photography, sculpture, drawings, music and paintings, and, to my displeasure, they were writing SAMO graffiti with Jean Michael Basquiat. He was a school chum of my son Shannon and spent lots of time in our home drawing and hanging out. He was fond of my pens and often used them without permission.”

In spite of the urban background, Bonita is also in touch with reservation life. Her photo collage Stalled captures a common Rez phenomenon with a measure of humor. “The series is based on an actual event,” she says. “It was in the hot Badlands of South Dakota. A friend and I were going to the Rosebud reservation when the car broke down.

“I decided this was a good photo op. It was not unique to me. Most Natives experience car breakdowns, rattle snakes, coyotes, etc. The situation was familiar, and I found humor in it. There were no other cars coming along. If he had not possessed mechanical skills, we could not have traveled further. The objects painted on the photos were just from imagination. If you are in a bad situation you better have an imagination.”

In addition to being a recognized visual artist, Pena Bonita is also a published writer of short stories, poetry and non-fiction as well as a founding member of the American Indian Writers Workshop. She has contributed numerous pieces to TALKING STICK Native Arts Quarterly. In 2004 she was a recipient of the National Foundation Book Award for her short story, “Lotto Baby.”

In spite of her accomplishments, Bonita is low key in many ways, and does not boast. Nadema Agard (Cherokee/Lakota/Powhatan), director of Red Earth Studio Consulting/Productions in New York City has been a friend for 30 years and has included Bonita’s work in most of the exhibitions she has curated. “Pena is always innovative,” Agard says. “Pena is always different and new. She is not stuck in a particular style or format. Her work is visually layered with multiple meanings. She never ceases to amaze me.”