The scene could have taken place at any rock concert. On September 19, an audience waited eagerly for the lead musician to arrive. As she strode in carrying her sax, she was greeted by thunderous applause and cheers while the rest of her band joined her on stage. Yet the concert that night wasn’t typical. It didn’t happen at a stadium but rather at the Library of Congress. And this musician, Joy Harjo, was also an internationally known poet who was about to present her inaugural reading as the first American Indian to be named Poet Laureate of the United States.

It was a momentous occasion for Harjo. “That evening felt like the accumulation of my life,” she says. “It deeply touched me. The work we do as poets, and even musicians, is hours and hours of questioning, writing and thinking. You never know where you are going to land.” 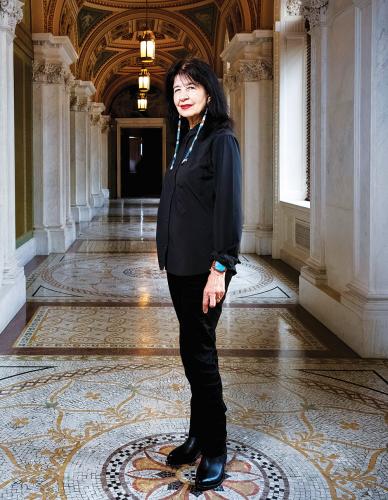 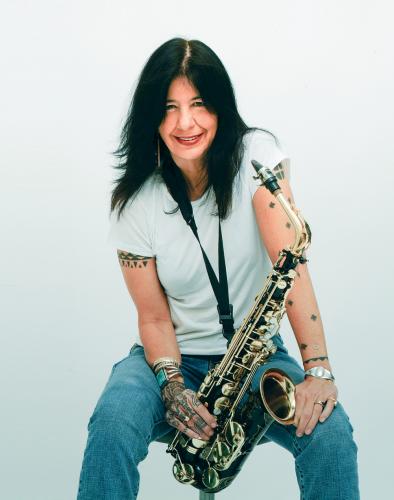 Harjo taught herself to play the saxophone when she was nearly 40 years old. Photo by Paul Abdoo. Courtesy of Joy Harjo

Harjo taught herself to play the saxophone when she was nearly 40 years old. Photo by Paul Abdoo. Courtesy of Joy Harjo 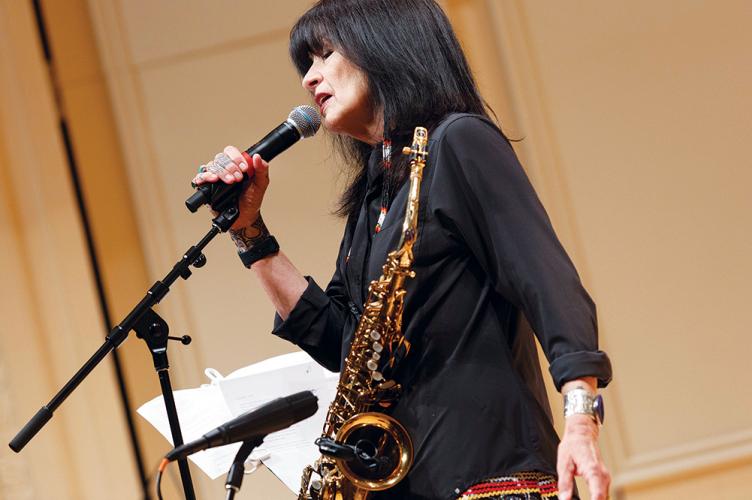 Harjo’s powerful performances combine her poetry with Native and other music. Photo by Shawn Miller, Library of Congress

Harjo’s powerful performances combine her poetry with Native and other music. Photo by Shawn Miller, Library of Congress

Harjo will serve as the 23rd Poet Laureate Consultant until the spring of 2020. The Library of Congress created this position in 1937 to not only celebrate the art of poetry, but “to make it relatable to as many people as possible,” says Librarian of Congress Carla Hayden. Other Poet Laureates have included Robert Frost and most recently, Pulitzer Prize-winner Tracy K. Smith. This past June, Hayden selected Harjo—a member of the Muscogee Creek Nation—for the role. “Joy is the perfect combination.” says Hayden, “She brings a personal history that expands on a larger history of the American experience.” And the way she integrates her poetry into jazz and Native song, Hayden says, helps broaden the definitions of “what is culture and what is art.”

Born on May 9, 1951, in Tulsa, Oklahoma, Harjo grew up on the northern border of the Muscogee Creek Nation. During the 1830s, the U.S. government forced the ancestors of her Cherokee mother and Creek father from their tribal homes in the East and relocated them to what is now eastern Oklahoma. Harjo’s poems blend stories about her life with those from her deep Native roots, often reflecting on the offenses of colonialism on her people. In “For Earth’s Grandsons” from her poetry book “An American Sunrise,” for example, she writes:

And no matter what happens in these times of breaking
No matter dictators, the heartless, and liars
No matter—you are born of those
Who kept ceremonial embers burning in their hands
All through the miles of relentless exile.

Ironically, this internationally known artist who has spent much of her adult life on a stage says, “I was the least likely person to become a poet.” Growing up with an absent father and then a repressive stepfather, she was a shy child who took refuge from her turbulent home life in her drawing. This talent earned her entry into the Institute of American Indian Arts in Santa Fe, New Mexico, at the young age of 16. Harjo says that school “saved my life.” During the height of the civil rights and American Indian rights movements, she says, “I found myself with a community of others who were like me. We made an incredible story together as young Native artists in the late ’60s.” While “we still weren’t allowed to speak Native languages and people were punished for that,” she says, “we were treated like we had something important to say and we could say it though our art.”

However, her passion for poetry wouldn’t be awakened until she attended the University of New Mexico, where a drama and then poetry instructor showed her the power of words. Soon she was listening to poetry readings and was hooked. “I met Native poets who were writing about our lives. That shifted it for me.” She was 22 years old when the birth of her second child, daughter Rainy Dawn, inspired Harjo to write her first poem.

Harjo has since written eight books of poetry, including one of her most recognized works, “She Had Some Horses,” in 1983 and “The Woman Who Fell from the Sky” in 1994. She just published her latest poetry book, “An American Sunrise,” this past fall. She has also written a children’s book, “The Good Luck Cat,” a young adult book, “For a Girl Becoming,” and two plays. She has received numerous fellowships and awards for her writing, including the Ruth Lilly Poetry Prize from the Poetry Foundation, the Wallace Stevens Award from the Academy of American Poets, the PEN Open Book Award and the American Indian Distinguished Achievement in the Arts Award.

Harjo says, “I love to write. Each poem is a discovery project, getting into that space. You write towards something, even against something.” But she also says that “Writing poetry is the art of listening. You feed your ears with songs—birds songs, sounds of different winds, and learn poems, learn songs, learn different voices.”

Perhaps that is why she returned to her first love of music. In her 2012 memoir, “Crazy Brave,” Harjo says her “passage into the world of humanity” occurred through jazz, when as a young child she heard this music playing from her parents’ black Cadillac. She was entranced, yet she had to give up on music when her junior high band teacher told her she could not play a saxophone because she was a girl and her stepfather forbade her to sing. Yet, she says, “I could always hear it when I was writing poetry.”

When she was nearly 40, she began to teach herself to play a saxophone while on stage as a companion to her poetry. Many of her songs evoke beatnik scenes of coffee houses in the 1950s and 1960s, as she sometimes speaks more than sings the stanzas of her poems, punctuated by bursts of intense sounds from her sax. Other times, she integrates poetry with traditional Native songs and music. Harjo has produced five award-winning albums and appeared in venues across the United States and other countries, first with her band Poetic Justice and currently, with Arrow Dynamics. In 2009, she won a Native American Music Award for Best Female Artist of the Year.

They are heroic: roots
You cannot mistake them
For any other six-foot walker
I could find them in a sea of feet
A planet or universe of feet

His feet are made of his mother’s spiritual concern
And of his father: historic, and mindfully upright
What walkers—
From mound builder steps that led to the sky maker
Past Spanish galleons, stage coach, and railroad snaker

One generation following another
No other feet but these could bare
The rock stubborn loyal bear
Towering intelligence and children picker upper
That is the one who owns these feet.

I’ve danced behind this man in the stomp dance circle.
Our feet beating rhythm together
Man, woman, boy, girl, sun and moon jumper.

My man’s feet are the sure steps of a father
Looking after his sons, his daughters
For when he laughs, he opens all the doors of our hearts
Even as he forgets to shut them when he leaves

And when he grieves for those he loves
He carves out valleys enough to hold everyone’s tears
With his feet, these feet
My man’s widely humble, ever steady, beautiful brown feet.

Reprinted from “An American Sunrise: Poems.” Copyright 2019 by Joy Harjo. Used with permission of the publisher, W.W. Norton & Company, Inc. All rights reserved.

Like herself, Harjo’s poetry and music are a combination of grace and grit, punctuated with a staccato beat of defiance. The weight of the issues she covers in her works does not bring her down but rather seems to move her forward. Resiliency, whether of an individual or Native culture, is a prevalent theme in her pieces, as in the poem she affectionately wrote for her husband called “My Man’s Feet” (above). She says the title of “An American Sunrise” was inspired by the strength and freshness of youth. “We all come into the world carrying dreams and hearts in our hands,” she says. “There is so much energy, you could be derailed or propelled.” But in the end, Harjo says, “It is about standing like a rock. Native people will outlast the atrocities and what this country becomes.”

Harjo has been a mentor and inspiration to many up-and-coming poets and other students. She has taught at several institutions, including at the University of California, Los Angeles, and most recently at the University of Tennessee, Knoxville. However, she returned to her hometown of Tulsa to work on a variety of projects, including an anthology of Native poetry due out next year. She is also discussing making a film based on her poem “Remember” (below).

Since her appointment as the U.S. Poet Laureate, however, she has been on a whirlwind tour of speaking and other engagements to promote the art of poetry. For many, Harjo’s appointment represents a new height in recognition for all American Indian artists. “The response has been astounding,” Harjo says. “We have all these wonderful Native poets and finally, maybe, there is a door opened for Native people.”

Reprinted from ”She Had Some Horses: Poems.” Copyright 2008, 1983 by Joy Harjo. Used with permission of the publisher, W.W. Norton & Company, Inc. All rights reserved.