Sliver of a Full Moon: Changing hearts, Minds and Legislation

Men who rape and beat women are bad men, but it is the bad laws that allow them to continue their violence. Federal law separates us from all other women in the United States. We are legally placed into a world where our tribal government cannot protect us from non-Natives who live in our communities, work for our tribe or come onto our tribal lands to hunt – attack, rape and beat [Native] women. 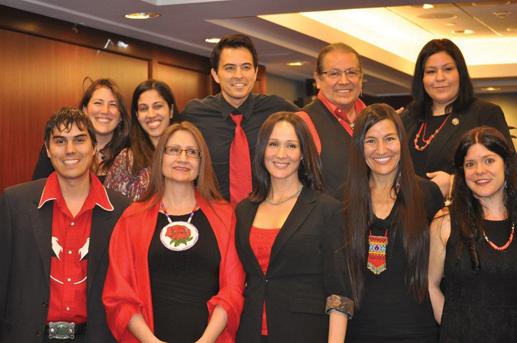 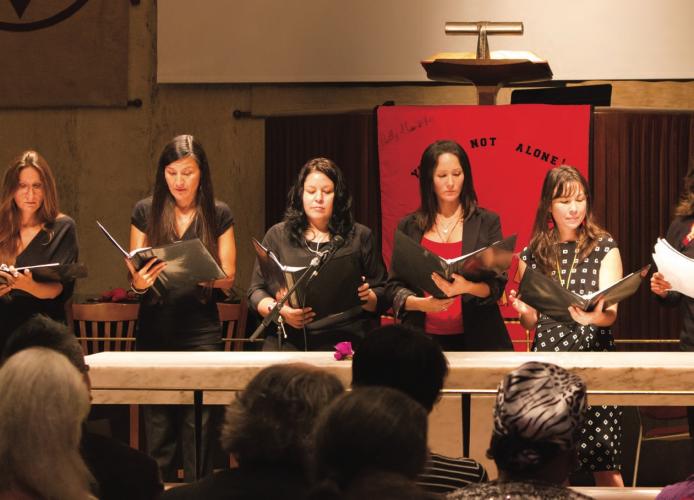 The Sliver cast members at the Church Center for the United Nations reading during the UN World Confer-ence on Indigenous Peoples in September 2014. Photo by Patrick J. Paglen

The Sliver cast members at the Church Center for the United Nations reading during the UN World Confer-ence on Indigenous Peoples in September 2014. Photo by Patrick J. Paglen

These words echoed in the wood-paneled auditorium of the Yale Law School in  March 2015, as 300 people listened to stories of Native women as survivors of domestic violence and the failure of the law to protect them. Although Yale Law School, in New Haven, Conn., is far from most reservations, it lies at the heart of legal education for a system which has allowed abuse to flourish.

Presented as a play, Sliver of a Full Moon highlights tribal grassroots efforts to fight for the protection of Native women within the Violence Against Women Act (VAWA). The original VAWA, while considered a landmark piece of federal legislation, provided no safety or justice for Native women abused by non-Native men on tribal lands.

When I was 26 years old, I lived on my reservation and started dating a non-Indian, a white man. I was in love and life was wonderful. After the bliss of dating for six months we were married…. After a year of abuse and more than 100 incidents of being slapped, kicked, punched and living in horrific terror, I left for good…. I called the Southern Ute tribal police, but the law prevented them from arresting and prosecuting my husband…. I called so many times, but over the months not a single arrest was made. On one occasion after a beating my ex-husband called the county sheriff himself to show me that no one could stop him. He was right; two deputies came and confirmed they did not have jurisdiction. I was alone and terrified for my safety.

At the Yale reading of Sliver, the Hon. William A. Fletcher, a federal judge with the United States Court of Appeals for the Ninth Circuit, explained in an introduction that, “this play is about part of the damage caused by Oliphant…because it proved virtually impossible to protect Native women against domestic violence.” While the re-authorization of VAWA in 2013 gave partial restoration of tribal jurisdiction, the title, Sliver of a Full Moon, illustrates that it was but a “sliver” towards the amount of restoration needed.

In the blessing, Lynn Malerba, Lifetime Chief of the Mohegan Tribe of Connecticut, said, “It is not a Native value to abuse women…. It is a Native tradition to use our voices and tell our stories.” She continued, “you will hear such an oral history told in the voices of women who have shown so much courage, not only in sharing their voices but in their relentless pursuit of justice for all Native women. I stand in awe of them.”

Said Malerba, “the efforts of these women truly have changed hearts, minds and legislation.”

On October 25, 2008, I was beaten and choked. I remember this date because it was three hours before a tribal council meeting. I attended that council meeting with finger and handprints on my neck from being choked. At the council meeting, I kept my head down with my hair pulled forward to try and keep the marks from being seen. It was after that meeting I had a moment of change, and I realized that it had to stop. I had to get out of this cycle of abuse. Soon after, I went to my tribal domestic violence program and sought help…  Violence against women is not a traditional value for my tribe. It has never been acceptable. Yet, domestic abuse and violence have diluted our sense of well-being and is counter to our traditional values and beliefs of community love and support.

Sliver combines the testimonies of domestic violence survivors with re-enactments of the discussions between Native activists and politicians to reform the law. The play has been performed nine times and has been re-written nine times to reflect the current state of the law. The play came about through the expertise of Mary Kathryn Nagle (Cherokee Nation of Oklahoma) who is both a practicing lawyer and a playwright. She studied theatre at Georgetown University and then matriculated at the Tulane Law School where she graduated summa cum laude. Nagle has written numerous plays including Diamonds…Are a Boy’s Best Friend, Fairly Traceable, Manahatta, Miss Lead and Welcome to Chalmette.

Nagle wrote Sliver after having dinner with attorneys Wilson Pipestem (Otoe-Missouria), who was directly involved in the strategy and advocacy of the VAWA legislation, and Brenda Toineeta Pipestem (Eastern Band of Cherokee), an Appellate Tribal Court Judge; their dinner was interrupted constantly by phone calls about VAWA and Native women. The Pipestems knew that support for tribal inclusion in the bill required that non-Native people understand both the humanity of the issue and the jurisdictional issues in federal Indian law. Brenda, knowing Nagle was a playwright and Indian rights advocate, suggested that Nagle write a play about the topic.

Nagle began writing Sliver in April 2013, and in June 2013 Sliver was performed for the first time in Albuquerque, N.M., at the National Indigenous Women’s Resource Center’s conference “Women Are Sacred.” Many of the women interviewed portrayed themselves onstage. Sliver was read at the U.S. Capitol Visitor Center in Washington, D.C., in March 2014 and then performed at the UN Church Center in New York City that September during the UN World Conference on Indigenous Peoples.

The play, as described by Nagle, is “constantly evolving.” Besides adjustments to the script, each cast differs as well. The parts are portrayed by the survivors themselves, community members and/or trained actors.

Lisa Brunner (Anishinaabe) has read at six performances. She is an enrolled member of the White Earth Ojibwe Nation of Minnesota and is a program specialist with the National Indigenous Women’s Resource Center. She has worked with tribal domestic violence and sexual assault issues since 1998. Brunner is the executive director of Sacred Spirits/First Nations Coalition which is dedicated to eliminating domestic violence, dating violence and sexual assault in the White Earth area. The cause is very personal to her. As a child, Brunner witnessed her mother being abused by her stepfather and then was sexually assaulted herself. She says, “VAWA is a public health crisis and has been for a long time.”

Brunner became involved in Sliver by telling her story to Nagle and Pipestem. She appreciates that Nagle has created a work that is “very respectful,” and she has seen the play become a tool of education and healing. After performances, non-Native audience members often approach her and ask for ways they can help. At one reading, an elder shared that the play affected her personally; her daughter had been murdered. The cast also has become an extended family, said Brunner, crying together and supporting one another.

Besides being written and acted by Native people, the Yale performance was directed by Madeline Sayet, a member of the Mohegan Tribe, who worked with Nagle on Miss Lead and the Sliver readings in New York and D.C. Sayet is the resident artistic director of Amerinda Inc. and the Mad and Merry Theatre Company, both in New York. She reflected that, “the stories [in Sliver] are devastating but people leave invigorated.”

Sayet remembered the power and energy of having four Alaska Native women survivors travel to New York to read their testimonies. At Yale, undergraduate students auditioned to play some of the roles. Sayet remarked that the students brought enthusiasm and deference to their parts. Besides the blessing by Chief Malerba, Mohegan elders and community members attended the event. Sayet was honored by the showing from her community especially since it can be difficult to bring people to the theater. Sliver has become a unique bridge between theater and storytelling.

Sliver came to Yale through the steadfast efforts of faculty and students. Ned Blackhawk (Western Shoshone), Yale Professor of History and American Studies, had seen the play in New York City with a small group of undergraduate students and urged a showing on campus. Along with Yale law student Katie Jones (Cherokee Nation of Oklahoma), they secured financial support through many organizations, including the Native American Law Students Association at Yale, the Yale Group for the Study of Native America, the Yale Native American Cultural Center and the Yale Indigenous Graduate Network. According to Blackhawk, “[Sliver] deeply enriched our broader campus community and exposed many of our students to the harrowing challenges wrought by the Oliphant decision. [It] is an exceptional play.”

The reaction to the Sliver performance at Yale was tremendous. Many attendees wrote feedback to the organizers, including one person who offered, “I am ashamed to say I knew very little (basically nothing) about VAWA and the effort to restore tribal jurisdiction before seeing the play – but [I am] grateful to have had the opportunity to remedy my ignorance and to be moved and inspired at the same time.” Another person remarked, “what an incredibly powerful and moving play, which I cannot stop thinking about and talking about to anyone who will listen.” Jones felt it was necessary to have the play shown at the Yale Law School. “Yale Law School graduates make up the highest proportion of Supreme Court clerks and other federal clerks,” she revealed, “[and] it is important for them to become educated about the subject.”