The Sideshow Olympics: Weirdness and Racism at St. Louis, 1904

The worst and weirdest of the modern Olympics took place in St. Louis in 1904, and it was bad precisely because it was held in the shadow of one of America’s greatest World’s Fairs. Many of the events were little more than sideshows, and one appalling experiment on indigenous people was close to a freak show.

Nancy Columbia Enutseak and dog in a portrait by the Gerhard sisters, taken at the St. Louis World’s Fair, 1904. The Enutseak family, Inuit from Labrador, spent the better part of two decades as living exhibits at a series of international expositions. Nancy herself was born at the Columbian Exposition in Chicago in 1893, hence her middle name. Photo by the Gerhard Sisters, courtesy of the Library of Congress

Nancy Columbia Enutseak and dog in a portrait by the Gerhard sisters, taken at the St. Louis World’s Fair, 1904. The Enutseak family, Inuit from Labrador, spent the better part of two decades as living exhibits at a series of international expositions. Nancy herself was born at the Columbian Exposition in Chicago in 1893, hence her middle name. Photo by the Gerhard Sisters, courtesy of the Library of Congress 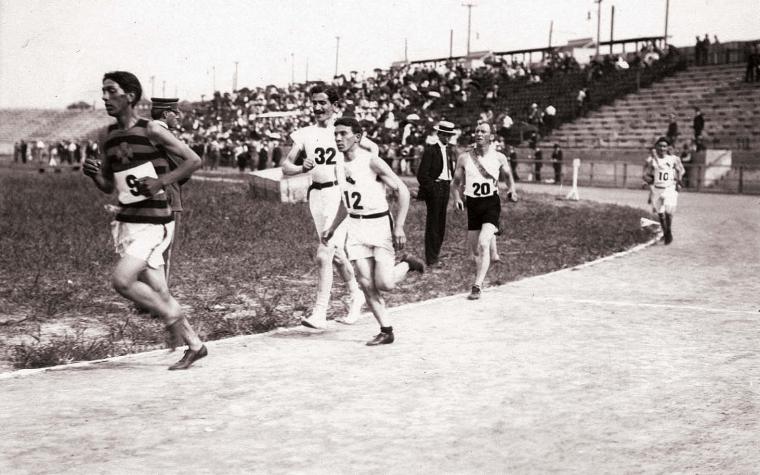 Frank Pierce (Seneca), wearing number 9, leads the field in the first lap around Olympic Stadium at the start of the marathon at the 1904 St. Louis Olympics. He is the first known American Indian to participate in an Olympic final. Photo courtesy Missouri History Museum, St. Louis

Frank Pierce (Seneca), wearing number 9, leads the field in the first lap around Olympic Stadium at the start of the marathon at the 1904 St. Louis Olympics. He is the first known American Indian to participate in an Olympic final. Photo courtesy Missouri History Museum, St. Louis 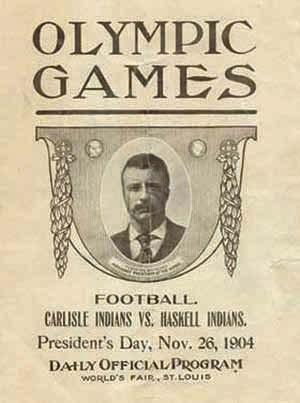 The Fair highlighted the U.S. government’s Indian boarding schools and their athletic accomplishments. One of its last sports events was a demonstration football game between Carlisle and Haskell Institute. (Carlisle won, 34 to 4.)

The Fair highlighted the U.S. government’s Indian boarding schools and their athletic accomplishments. One of its last sports events was a demonstration football game between Carlisle and Haskell Institute. (Carlisle won, 34 to 4.)

This pseudo-scientific demonstration, grandiosely called “Anthropology Days,” served mainly to reveal the race prejudice that warped athletics, and all of society, at that time. Its influence continued for years.

But even so, Native athletes made their first significant appearance in the Olympics in 1904, and even some of the sideshows were sports milestones. Since the organizers planned the games as an adjunct to the Fair, formally the Louisiana Purchase International Exposition, it has been hard to tell which events were a recognized part of the Olympics. National teams were not yet recognized, and athletes mainly represented sports clubs. But if it had been a sovereign competitor, the Haudenosaunee League would have made a very respectable showing.

The Mohawk runner Peter Deer from the Kahnawake Reserve in Quebec, Canada, made the finals of both the 800- and 1,500-meter races. He also placed third in the mile run, not an official Olympic distance.

Iroquois from Brantford, Ont., near the Six Nations Reserve, fielded their own team in lacrosse, then an official Olympic sport. Since it was a three-team tournament, despite finishing last, they still won a bronze medal. (The official roster gives little clue to the actual players, consisting of blatant pseudonyms like “Flat Iron” and “Man Afraid Soap.”)

But the title of first Native Olympian probably goes to Seneca distance runner Franklin Pierce from Cattaraugus, N.Y., who started in the marathon on the first day of formal competition. A younger brother of Bemus Pierce, the All-American football player and soon to be the first Indian football coach at the Carlisle Indian Industrial Institute, Pierce led the opening lap around Olympic Stadium. But he dropped out in the extreme heat. (The eventual winner was sustained during the race with two doses of strychnine and brandy, possibly the first recorded Olympic use of performance enhancing drugs, and nearly died after the finish.)

The marathon produced another Olympic first. Two of the finishers, Len Taunyane (Lentaw) and Jan Mashiani (Yamasani), were Tswana tribesmen from South Africa, the first black Africans to participate in the Olympics. Overlooked until recently both by serious historians and racist commentators, they placed well, ninth for Taunyane and 12th for Mashiani, and might have done better if they hadn’t been chased a mile off course by an angry dog.

The two Tswana had come to St. Louis as part of a sideshow recreation of the Boer War; spectators weren’t told that the tribesmen were actually college students. As dispatch runners during the war they were well prepared for the marathon. But the Fair’s many anthropological exhibits provided some Olympic participants who were neither as well prepared nor possibly as willing.

Like the other great world’s fairs at the turn of the century, St. Louis featured an array of recreations of indigenous life, a sort of “human zoo.” (One of the earliest and most ambitious, the Indian Congress at the 1899 Omaha Trans-Mississippi Exposition, was planned in part by James Mooney, the noted researcher in the American Bureau of Ethnology, later incorporated into the Smithsonian.) Some indigenous families made a career of the world’s fairs. One of the most popular fi gures at St. Louis, the young Labrador Inuit girl Nancy Columbia Enutseak, had been born at the 1893 World’s Columbian Exposition in Chicago. In between fairs, the Enutseak family wintered at New York’s Coney Island.

The ethnology exhibits at St. Louis served a further mission. Coming after the Spanish– American War and American conquest of the Philippines, they sought to affirm the “civilizing” purpose of the white man’s rule. Encampments along the Pike, the World’s Fair midway, were arranged to show progression from “savage” life to assimilation. The Fair highlighted the U.S. government’s Indian boarding schools and their athletic accomplishments. One of its last sports events was a demonstration football game between Carlisle and Haskell Institute. (Carlisle won, 34 to 4.)

A Model Indian boarding school actually conducted a semester of operations on the fair grounds, importing as some of its students a group of young women from the Fort Shaw Indian School near Great Falls, Mont., who had formed one of the first female basketball teams. The Fort Shaw team beat all comers, a feat which inspired a recent book and Montana PBS special to call them “Basketball Champions of the World.” One of their loyal fans at St. Louis was the Chiricahua Apache warrior Geronimo, who maintained an autograph booth at the Indian Village.

But there was a darker side to the Fair’s native athletics. The Olympic organizers also sponsored a two-day meet in mid-August called “Anthropology Days,” plucking subjects from the ethnology exhibits to compete in a mix of European track-and-fi eld events and supposedly indigenous sports. They presented the affair as a scientific experiment.

“We have for years been led to believe,” said the official report, “that the average savage was fleet of foot, strong of limb, accurate with the bow and arrow and expert in throwing the stone, and that some, particularly the Patagonians, were noted for their great size and strength, and owing to the peculiar life that many had been called upon to lead they have been termed natural athletes.” The competitions were scheduled so that scientific observers could be present and, continued the report, the results “disprove these tales.”

The organizers ran hundred-yard heats for six groups, “Africans, Moros (Philippines), Patagonians, and the Ainu (Japanese), Cocopa (Mexican) and Sioux Indian tribes.” The best time, by an “Americanized Indian,” was one “that almost any winner of a schoolboy event could eclipse at will.” The best shot put “was a ridiculously poor performance,” and other events were equally disappointing. The report did acknowledge that some of the competitors weren’t that interested. “With the pigmies, however, it is only fair to state that they entered into the spirit of this competition for fun and only became interested in the pole climbing and their mud fight.”

Some of the observers objected that the results would have been better if the participants had some training, or even concern for the outcome. “It was a very hard meeting to handle,” said the report. And one important figure found the whole affair appalling. Pierre de Coubertin, the founder of the modern Olympic movement, called it “an outrageous charade.”

“It will of course lose its appeal,” he wrote, “when black men, red men and yellow men learn to run, jump and throw, and leave the white men behind them.”

But the organizer of the Anthropology Days maintained that it would have scientific value for years to come. “The whole meeting proves conclusively that the savage has been a very much overrated man from an athletic point of view,” he wrote.

The man who drew this conclusion was James E. Sullivan, long-time editor of Spalding’s Athletic Almanacs, director of Physical Culture for the St. Louis Fair, organizer of the 1904 Olympics and, for years, the dominant force in American amateur athletics. Eight years later he came to play the crucial role in taking back the Olympic gold medals won by Jim Thorpe, a natural athlete if ever there was one.