Recognition Matters: Illuminating the Stories of Native People Who Served

The completion of the National Native American Veterans Memorial this fall encourages us to reflect on a legacy of service to the United States that spans the entirety of the country’s history. At its heart, the memorial acknowledges this commitment and invites all of us to recognize the dedication of and sacrifices made by Native servicemen and servicewomen. 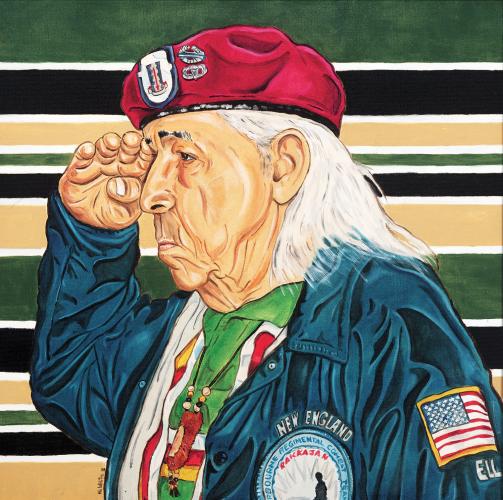 Their more than two centuries of service is well known in Indian Country. Veterans are welcomed home with distinction and ceremony, honored with dances and given due respect at gatherings. However, the ubiquity of service and communal reverence of Native veterans is rarely known beyond Indigenous communities.

The need to tell these stories moved the U.S. Congress to pass legislation that entrusted the National Museum of the American Indian to create the National Native American Veterans Memorial and for the museum to produce its companion book and exhibition entitled “Why We Serve: Native Americans in the United States Armed Forces” (see p. 36). Yet beyond this effort to honor these Indigenous veterans lies a concomitant responsibility to understand their experiences.

Understanding this long history of service first requires confronting a paradox: why have so many Native people served in the armed forces of a country that has violated almost every treaty it negotiated with Native nations, taken their tribal homelands and suppressed Indigenous languages and cultures? There is no single answer.

Not all service members were motivated by patriotism. Some were drafted. Some were attracted by the education, travel and job opportunities that they would not have had otherwise, particularly women. Others were following in the footsteps of family or tribal members and joined to defend their homelands.

In addition, despite what movies and novels might suggest, military service is rarely romantic or heroic. Not all soldiers fought on the front lines. They supported military efforts and servicemen and servicewomen from a wide range of other fronts—from airplane hangers as mechanics, hospitals as medical personnel to offices as clerks. Accordingly, the memorial recognizes Native men and women from all aspects of military service—whether they served in battle or during peacetime, at home or in foreign lands—and their stories are included in the “Why We Serve” book and exhibition as well as in this commemorative issue of American Indian magazine.

The idea that individuals should be remembered and acknowledged lies at the heart of every memorial, and so it is for the National Native American Veterans Memorial. Despite the fraught history of U.S.–American Indian relations, Native dedication to the U.S. Armed Forces has never diminished. At this moment, when our nation is engaged in a difficult reckoning over issues of race and social justice, the memorial also reminds us of Native peoples’ contribution to our shared country as well as the sovereignty of tribal nations.

We therefore invite readers to discard generalizations about Native people, both positive and negative, and gain insight by immersing themselves in their stories. The “Why We Serve” book and exhibition and this commemorative issue offer windows into the vast experiences of Native veterans, accounts that reveal an aspect of Indigenous history that has relevance for all of us who call the United States home. Unique to each individual, the experiences recounted are but a small portion of the many stories that could be told. These offerings are rather a starting point that we hope inspires further research, documentation and understanding of the extraordinary legacy of those Native Americans who served in the U.S. Armed Forces.

National Museum of the American Indian Senior Editor Alexandra Harris and Historian Mark Hirsch co-authored the book and curated the exhibition “Why We Serve: Native Americans in the United States Armed Forces.”