“Most people know that we are losing species. Ask schoolchildren, and they’ll know about the panda or the orchid…but ask someone if they know that languages all over the world are dying, maybe one in 10 might.”

These are the words of Bob Holman, poet and expert on oral traditions, sounding the alarm on an impending Extinction Event in indigenous languages. Holman played a key role in the PBS documentary Language Matters with Bob Holman, produced by David Grubin. Scholars estimate that there are more than 6,000 languages spoken throughout the world, but we lose on average one every couple of weeks and hundreds will likely be lost within the next generation. According to Holman, “By the end of this century, half the world’s languages will have vanished. The die-off parallels the extinction of plant and animal species. The death of a language robs humanity of ideas, belief systems and knowledge of the natural world.” 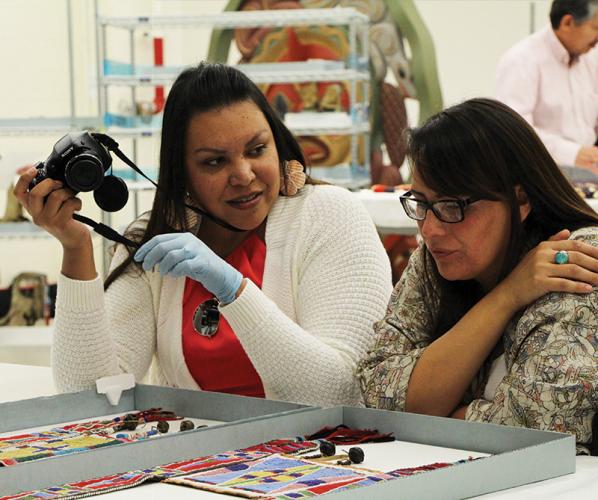 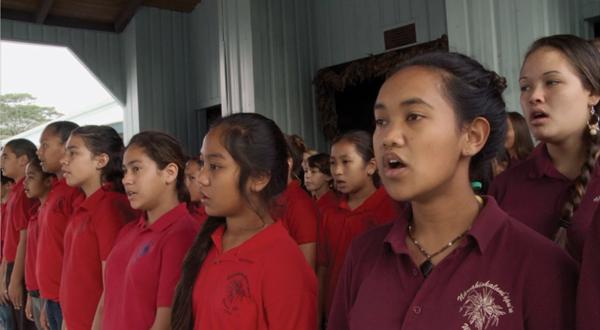 Ke Kula ‘o Na-wahı-okalani‘o-pu‘u is a Hawaiian language immersion school with grades K–12 on the Island of Hawaii, also known as Big Island, Hawaii. All the classes at Nawahi are taught in Hawaiian. Image Courtesy David Grubin Productions From The Film Language Matters With Bob Holman

Ke Kula ‘o Na-wahı-okalani‘o-pu‘u is a Hawaiian language immersion school with grades K–12 on the Island of Hawaii, also known as Big Island, Hawaii. All the classes at Nawahi are taught in Hawaiian. Image Courtesy David Grubin Productions From The Film Language Matters With Bob Holman 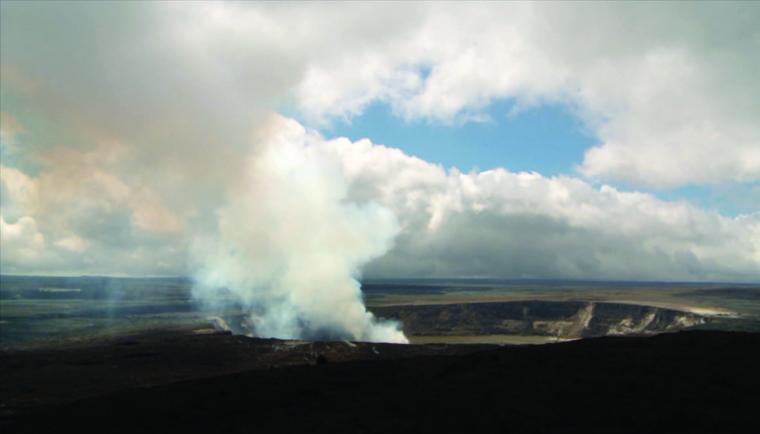 The volcano at Kilauea on Hawaii Island. The volcano is called Pele by Hawaiians after the Hawaiian goddess who, according to legend, lives there. Image courtesy David Grubin Productions From The Film Language Matters With Bob Holman

The volcano at Kilauea on Hawaii Island. The volcano is called Pele by Hawaiians after the Hawaiian goddess who, according to legend, lives there. Image courtesy David Grubin Productions From The Film Language Matters With Bob Holman 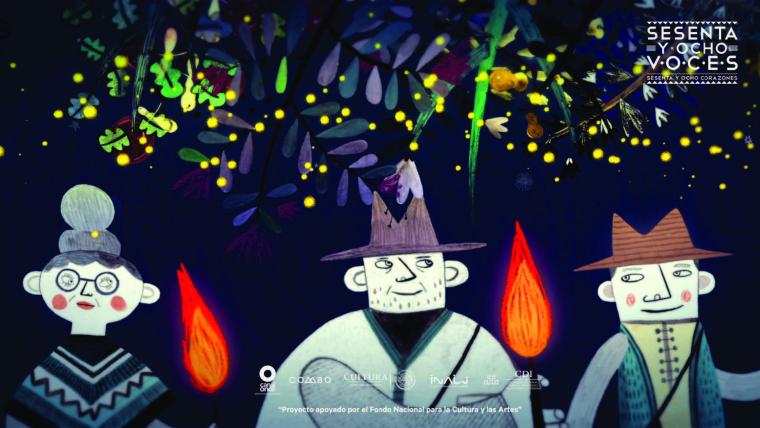 Still image from The Fireflies that Embellish the Trees, (2015, 1:05 min. Mexico), an animated short fi lm based on a tradition from the Matlatzinca people. The story tells of resuming a Saint Peter’s Day tradition in which people and fireflies took care of trees so they bore more fruit. The film short told in the Matlatzinca language is part of the 68 Voices, 68 Hearts project, a featured partner of the 2017 Mother Tongue Film Festival.

Still image from The Fireflies that Embellish the Trees, (2015, 1:05 min. Mexico), an animated short fi lm based on a tradition from the Matlatzinca people. The story tells of resuming a Saint Peter’s Day tradition in which people and fireflies took care of trees so they bore more fruit. The film short told in the Matlatzinca language is part of the 68 Voices, 68 Hearts project, a featured partner of the 2017 Mother Tongue Film Festival. 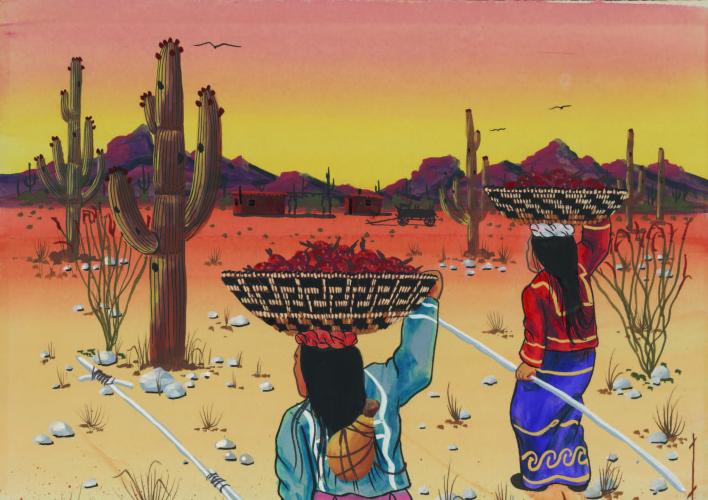 In some ways, the loss is even greater than the loss of an animal or plant species. According to Joshua A. Bell, anthropologist and curator of globalization at the Smithsonian’s National Museum of Natural History, “Language diversity is one of humanity’s most remarkable achievements.” Indigenous people are the greatest source of this diversity and have the greatest stake in its preservation. Natives who can communicate in their own languages have an even richer appreciation of their own heritages and command a deeper understanding of their culture and communities. For the Native communities themselalves, fluency in Native languages complements efforts for greater social unity, self-sufficiency and identity. And for those outside these communities, sustaining this cultural diversity enriches all of us and helps greater cross-cultural understanding.

International organizations recognize the crisis. The United Nations Educational, Scientific and Cultural Organization (UNESCO) publishes an Atlas of the World’s Languages in Danger, edited by Christopher Moseley, and now in its third edition. UNESCO estimates that there are about 3,000 endangered languages worldwide, and the Atlas lists about 2,500 (among which 230 have become extinct since 1950). The interactive online version of this publication uses intergenerational language transmission to measure degrees of endangerment.

The U.S. government, major Native organizations and the Smithsonian itself have long been part of the fight to save Native languages, where possible marshaling resources to support tribes and Native speakers. Congress passed the Esther Martinez Native American Languages Preservation Act in 2006, providing support for Native language immersion and restoration programs. The Native American Languages Act of 1990 recognized that “the status of the cultures and languages of Native Americans is unique, and the United States has the responsibility to act together with Native Americans to ensure [their] survival.”

In late 2012, the Department of Health and Human Service’s Administration for Native Americans, the Department of Interior’s Bureau of Indian Education and the White House Initiative on American Indian and Alaska Native Education signed a Memorandum of Understanding to collaborate on promoting instruction and preservation of Native American languages. A Native American Languages Summit met in Washington, D.C. in September 2015, to celebrate 25 years of the Native American Languages Act. The Summit discussed long-term strategies for immersion language programs, trumpeted the work of youth-led efforts to revitalize languages and encouraged evidence-based research, education and collection of language documentation.

American Indian organizations are increasingly active. In 2010, The National Congress of American Indians (NCAI) declared Native languages to be in a state of emergency. This leading Indian advocacy organization declared that the crisis was the result of “longstanding government policies – enacted particularly through boarding schools – that sought to break the chain of cultural transmission and destroy American Indian and Alaska Native cultures.” Tribes understand that tribal identity depends on language and culture.

The Smithsonian itself has launched the Recovering Voices Initiative, one of the most important language revitalization programs in the world. As a collaborative program of the National Museum of Natural History, the National Museum of the American Indian and the Center for Folklife and Cultural Heritage, Recovering Voices partners with communities worldwide. Its research links communities, museum collections and experts. In collaboration with communities, it is identifying and returning cultural heritage and knowledge held by the Smithsonian and other institutions

Smithsonian geologist and curator Timothy McCoy gives an example. “In the Miami Tribe of Oklahoma, our language is being reintroduced to the community using written documentation collected a century or more ago. Language revitalization goes hand-in-hand with cultural revitalization, strengthening traditional ways of thinking about our people, place and relationships.”

The Recovering Voices Initiative (www.recoveringvoices.edu) also hosts film programs through its Mother Tongue Film Festival, an annual program now in its second year. Beginning on United Nations Mother Language Day in February, this year’s festival presented more than 30 films representing 33 languages from around the world. Films about language revitalization and efforts to teach younger generations their “mother tongues” are also part of this festival.

Teresa L. McCarty, a scholar who has taught at UCLA and Arizona State University, has written extensively about indigenous language immersion. She is deeply informed by an understanding that the world’s linguistic and cultural diversity is endangered by the forces of globalization, “which works to homogenize and standardize even as they segregate and marginalize.” Language immersion helps counter the pressures on children to communicate exclusively in English.

Although establishing immersion schools – along with the ongoing work required to operate them – requires resources often beyond the capacities of many tribes, there is a growing appreciation that language and cultural immersion approaches are necessary for Native communities to have fluent speakers in their own languages. NCAI has urged the federal government to provide funding, training and technical support.

Many approaches support cultural immersion in communities, from language instruction in early childhood education to bilingual and multi-lingual instruction in schools, to language camps and classes and childcare provided by speakers of the language. Programs include teacher training, family programming designed to support Native language use in the home, development of educational resources (e.g. lesson plans) and creative uses of technology on the Internet and social media. Use of Native languages in local radio, television and in local publications also helps. Some local efforts focus on novice learners, others on learners with prior language knowledge and proficient speakers. Many tribes have found creative ways to advance this work and engage their communities.

One of the most significant federal programs that support this work is a program of the Institute of Museum and Library Services (IMLS). Their Native American/Native Hawaiian Museum Services program provides funding to Indian tribes, Native Alaskan villages and corporations, and organizations primarily representing Native Hawaiians. These grants sustain heritage, culture and knowledge, including language preservation work.

The Modern Language Association gave strong support to the effort in its annual conference, honoring Ofelia Zepeda, the Tohono O’odham poet and scholar and other leaders in indigenous language research. Scholars presented papers and panels informed by a scholarly commitment to indigenous worldviews. The Association unveiled a Language Map aggregating data from the American Community Survey and the U.S. Census to display the locations and numbers of speakers of 30 languages commonly spoken in the United States. Their Language Map Data Center provides information about more than 300 languages spoken throughout the country.

Though the challenges can be overwhelming, Native languages are being preserved, and becoming part of the daily life of Native communities. As indigenous peoples communicate in their own languages, they honor their rich heritages and cultures.