Patricia Michaels might not have won the popular cable-TV fashion competition show Project Runway when she reached the final round in 2013, but she is making the work of Southwest Native designers a constant presence at the heart of the nation’s fashion industry. 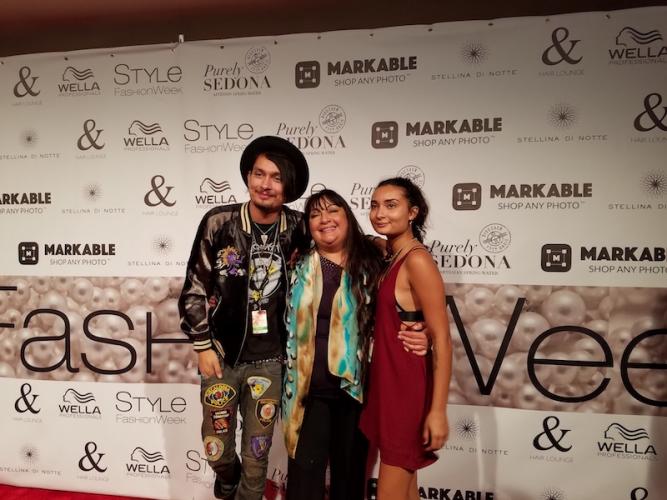 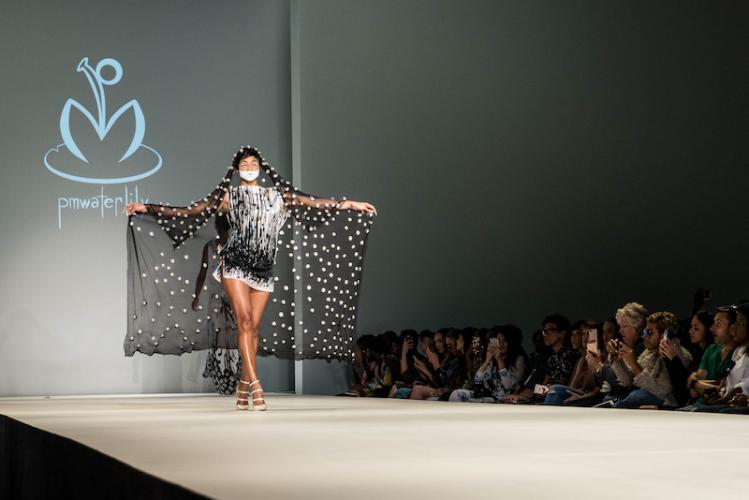 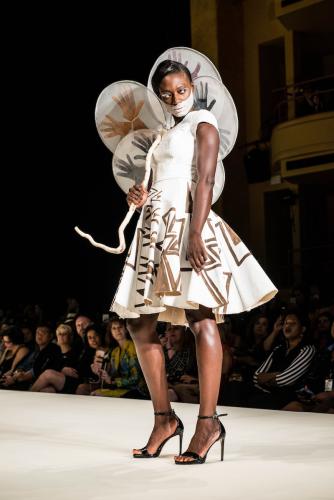 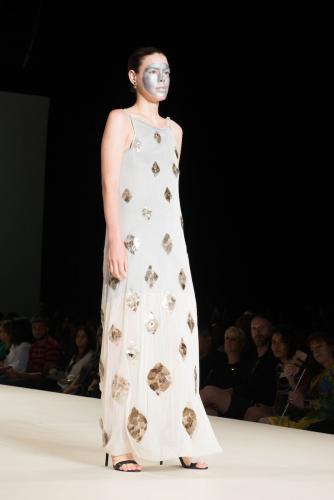 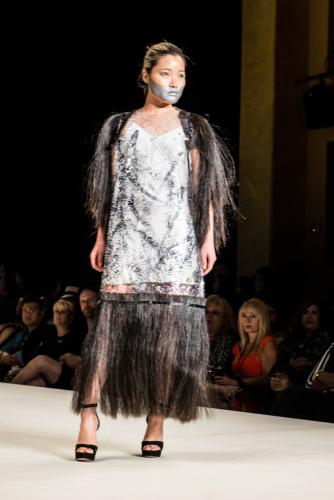 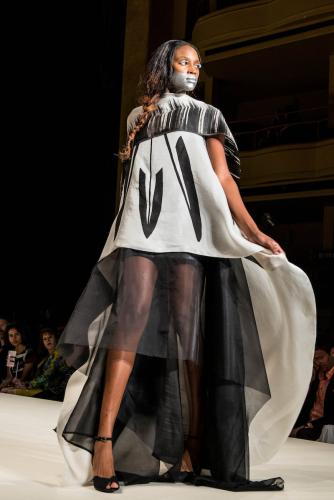 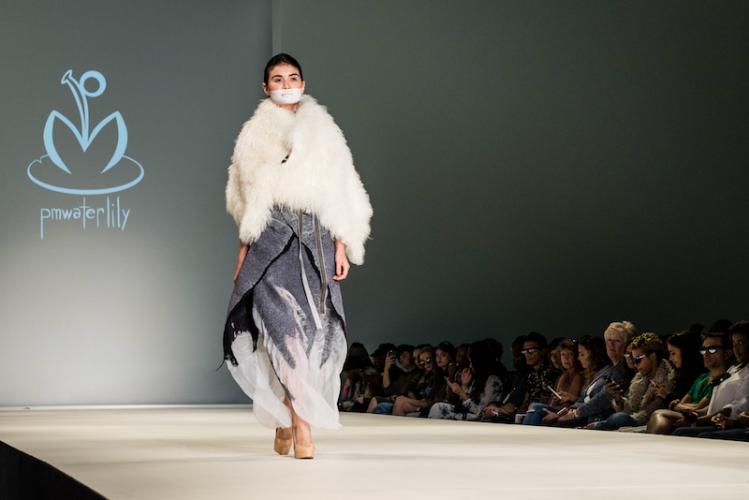 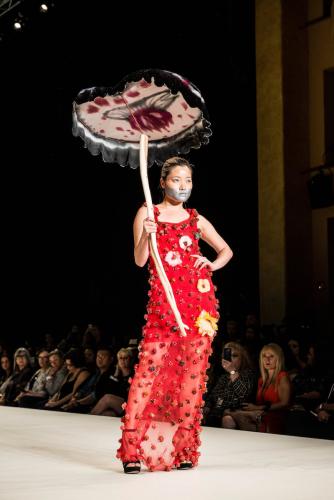 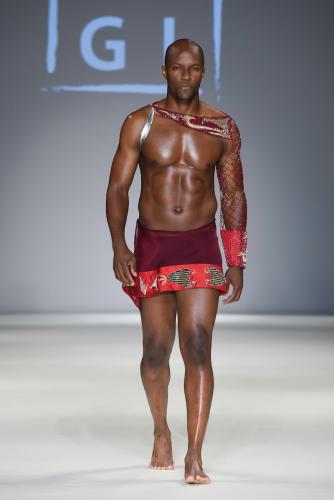 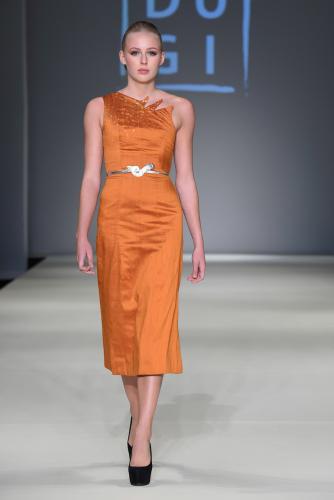 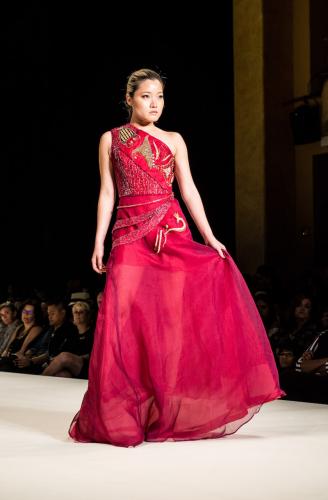 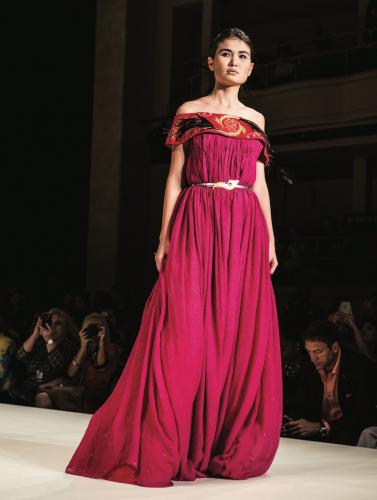 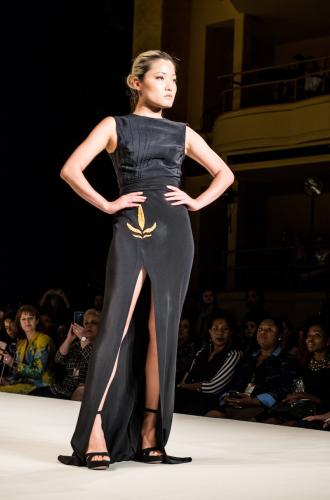 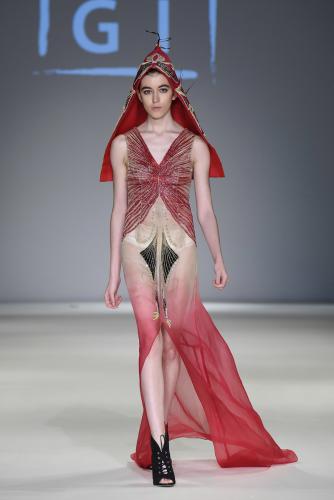 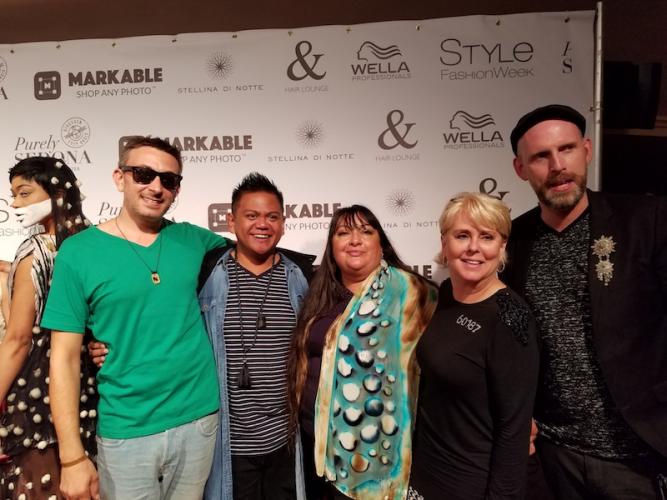 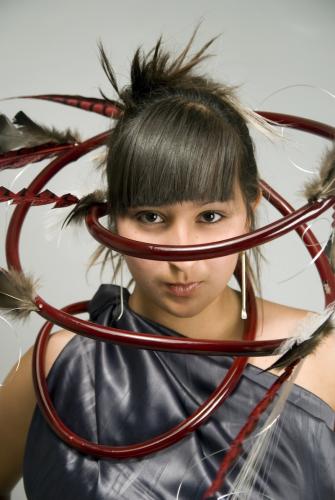 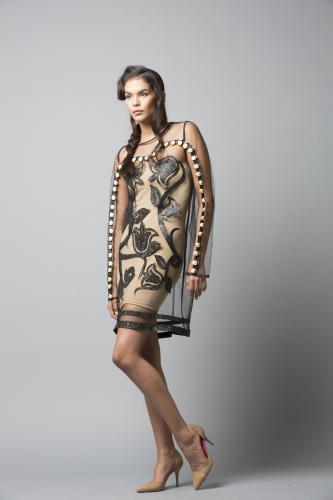 Michaels (Taos Pueblo) returned to the New York catwalk recently with a spectacular show presented by Style Fashion Week. At least 1,200 fashionistas attended in the cavernous Hammerstein Ballroom, with 800 on folding chairs, the rest standing in the ground floor and the balcony. A smattering of Project Runway veterans came to show support. Although Michaels has been a leading figure in Southwest design for decades, her appearance on the show was a national breakthrough, both for her and for Native fashion.

Along with Navajo designer Orlando Dugi, Michaels introduced a collection imbued with the colors and traditional culture of Native New Mexico. As her models strutted down the runway for the sophisticated New York audience, they paid tribute to the berry-gathering women of her home community.

Her presentation, called The Wildberry Collection, reflected the wild plum, chokecherry, currant, rosehip, blueberries and strawberries that Pueblo women would collect in season from the mountains. “So those are the fun wool berries that are just dancing!” she says. “People may think, well, you’re working, but, when we’re in the mountains, believe you me, we’re having a blast gathering berries.”

Michaels wanted to show this aspect of traditional life. “We need to have that female bond, to be honest about how we protect one another and to make sure that’s not lost. These works and their representation celebrate the way my grandmother raised us.”

Southwest color also dominated Dugi’s Red Collection, which was entirely dyed in cochineal derived from the female cactus-dwelling cochineal insect. The dye is derived by drying the entire insect and then crushing it into a powder. It bonds best with protein-based fibers, such as silk and wool. The powder can produce a variety of colors – different shades of red, pink, orange, green, purples, silver and black. Dugi says The Red Collection was inspired by the pre-Columbian, matriarchal, civilization of the Southwest. “With this matriarchal monarchy, the women are more empowered, but there’s still a balance between masculine and feminine,” he says. Significantly, the red color is derived only from the female insect, not from the male.

The venue for Michaels and Dugi, Style Fashion Week, began in March 2011 when its director, Veronica Kerzner, set up shop in the back of a friend’s office in Los Angeles with six interns. Nearly six years later her company, with her husband as partner, hosts shows in New York, Palm Springs, Miami (Art Basel), Dubai, Santa Fe, Boston and Washington, D.C.

Kerzner was introduced to Santa Fe by a photographer from the area, who had been attending Style Fashion Week for years. When she finally travelled there, she met with governors from different pueblos as well as the mayor and governor of the city. On a side-trip to Taos she met Patricia Michaels through mutual friends. “She had us over to her house where we got to see all of her work and everything that she’s doing and really hear her story; it’s such a beautiful thing.”

Michaels was also able to connect her with Orlando Dugi (Diné). Kerzner invited him out to New York as well. “I remember looking at his pictures and pieces of his art,” she says. “He’s obviously an incredible artist.”

With only four weeks to create The Wildberry Collection, Michaels and PM Waterlily, her company and Native namesake, turned out 33 pieces. Her first pieces, literally painted on canvas, paid homage to Anasazi pottery. “I chose canvas for two reasons,” she says, “one, because I paint so much, and two, since it technically takes the shape and form of a vessel.” Her first model on the runway wore a dress accompanied by a parasol in a variety of colored handprints.

The dramatic impact was heightened by the makeup, or lack thereof in the conventional sense. Faces of the models were painted in white or silver, half or complete, representing for Michaels the masks we wear in life. They were also a tribute to her late nephew and the feeling of loss at his passing. “As we live our daily lives, we have a saying in our village which says: ‘We walk this life in sadness and in happiness’,” she says. “We don’t know which mask anyone is wearing but we still have to be strong to know that that’s how life is for everybody. It’s not always one or the other.  It’s always going to be both.”

Michaels embellishes certain pieces with mineral from her home in Taos, N.M., known for its micaceous pottery. She incorporates it into her designs in honor of pottery makers. Additionally, she bought all the wools she used from local farms in northern New Mexico. “A lot of the work you see is cottage industry con-tract work,” she says. “It’s not only going to me, but to different artisans who maybe don’t have a place to show their work, but their hands are talented and they can help me accomplish these feats.” She was able to provide piecework for about 30 different home workers, who didn’t always have means to get to and from a job. “So this isn’t a selfish endeavor,” she says. “I don’t go home and have some fancy lifestyle.”

In spite of her deep attachment to Native tradition, she made a surprising choice for the soundtrack for the show. He models marched to the powerful voice of opera-singer Luciano Pavarotti. Michaels explains that when she was five years old, her brother, John Trujillo, started the Pueblo Opera Youth Program. She says that Pueblo children were able to see the opera during the full dress rehearsal as well as “the beauty of the orchestra, the costuming, outdoor theatre, different voices, the night skies and the changing of weather.”

“I wanted to bring to the world the under-standing that Native Americans are culturally diverse outside of their cultures as well,” she says. Because of that opportunity, she says, “I’ve never been inhibited to try something bold. I had to incorporate this into the show to bring out some of the bold but simple, dedicated beauties that I always have felt in the opera house.”

Toward the end of the show, Michaels brought out clear vinyl pieces, her favorite medium this time around. Beads were strewn on them in a beautiful unplanned pattern. She says she wanted to move away from the stereotype of intricate beading on Native designs. While some pieces in her collection were intensely beaded, she explains, “I don’t always want the expectation of that.” Michaels created a formula for throwing the beads. “You should have seen me,” she says, “I was like a crazy kid in a candy store! I was having so much fun; it was liberating.”

“As an artist,” she says, “you have to give yourself that. Because you prove yourself at different parts of your life, and if you don’t give yourself room to explore, what are you doing it for? We should be able to liberate ourselves from any preconceived ideas of who we are. Those pieces at the end are celebrating that flight while still keeping the integrity of who we are.”

While learning to bead at around five to seven years old, Orlando Dugi (Diné) did not envision himself as a fashion designer. After graduating high school, he spent a number of years dancing at powwows throughout the U.S. and Canada. It wasn’t until 2009 that a friend, impressed with his talent for beading, suggested that he apply for the Santa Fe Indian Market. Dugi soon impressed the judges at SWAIA and the Heard Museum Guild Art Show and Market, among others. He started with eveningwear, and specifically clutches. In 2010, he won first place in SWAIA’s clothing contest for his very first evening gown. His work was completely self-taught and fittingly a beaded creation. “I had this gown in my mind,” he explains. “But I wasn’t sure how to draw it out. I didn’t know how to drape or make a dress; I basically just taught myself how to make my own patterns.”

Dugi says that his collection is all about the beauty, elegance, femininity and strength of women. “I don’t do menswear,” he says. “But in order to have balance in the collection, I did two men’s pieces at the end.” All of the work was hand done, using the technique of tambour beading and embroidered with gold thread and French coil. In addition to his own hand-work, Dugi employed four embroiderers, two seamstresses and a fashion intern, working on the pieces for five months, 60 to 80 hours a week, to create a total of six garments.

While working at the Morning Star Gallery, in Santa Fe, N.M., Dugi learned about the use of bayeta cloth, originally woven in continental Europe and England, dyed with cochineal and used by Navajo women in making blankets in the mid to late 1800s. The cloth was already dyed in cochineal upon arrival, then unraveled, spun into a yarn and finally woven into dresses and blankets. The cochineal dye was originally an export of the Americas, created by indigenous peoples and later spread throughout Europe. Dugi was fascinated with the journey of the insect and his love for the color red.

“What I strive for mostly is women’s empowerment,” Dugi says. “There are so many women in my life – my moms, my grand-mothers, my sisters, my nieces.” He also has adopted family all over Indian country. “It’s because of them that I want to make sure that women are seen in the best possible light. What I want to do is to just add to the beauty of that, not just the physical beauty, but the beauty of the whole.”

The beauty of Southwest fashion might have been unfamiliar to the New York audience when Michaels made her debut on Project Runway in 2013 and nearly won the season-long competition. But her recent show is making her name, and that of her Native colleagues, increasingly well known. The rich diversity of American Indian design is becoming a real presence in mainstream fashion.