Prominent Americans: Photographs of Treaty Delegates at the Smithsonian

In the 1850s, tribal treaty delegates visiting Washington, D.C., inspired the first Secretary of the Smithsonian to establish the institution’s first photograph collection. Originally conceived as a photographic record of ethnic types, the now-vast collection consists of thousands of delegation portraits. But scholars of today, both at the National Museum of the American Indian and from the depicted tribes, see the subjects as individuals, as prominent Americans. With the help of Native scholars, the Museum Archives is working to collect proper identification and background information for the tribal leaders pictured in the photographs. 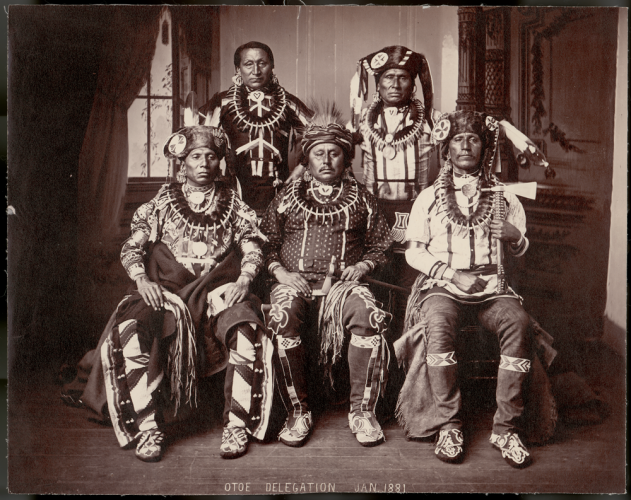 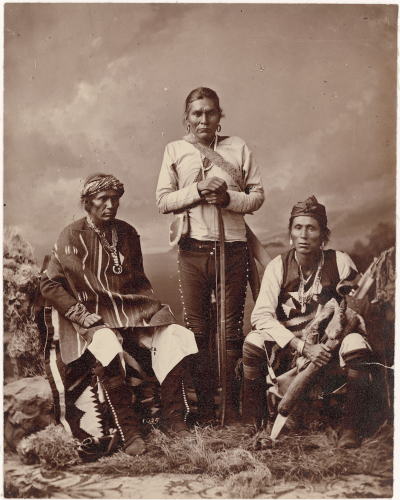 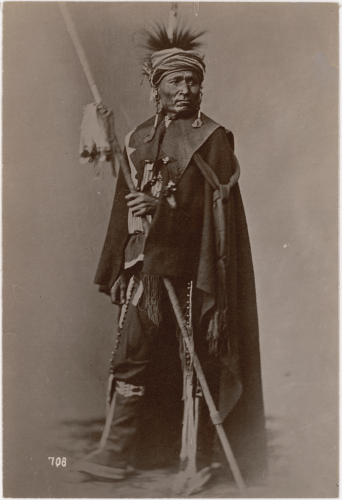 A possible member of the Kaw 1867 delegation to Washington, D.C. Photo by Alexander Gardner. National Museum Of The American Indian  Archive Center (P02464)

A possible member of the Kaw 1867 delegation to Washington, D.C. Photo by Alexander Gardner. National Museum Of The American Indian  Archive Center (P02464) 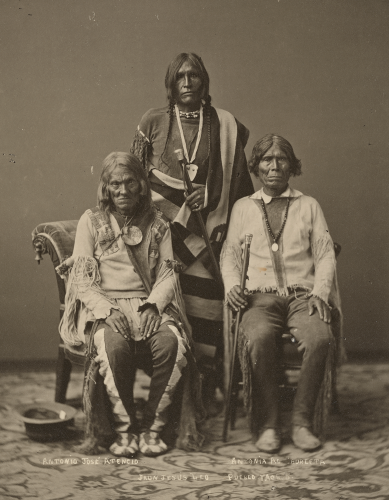 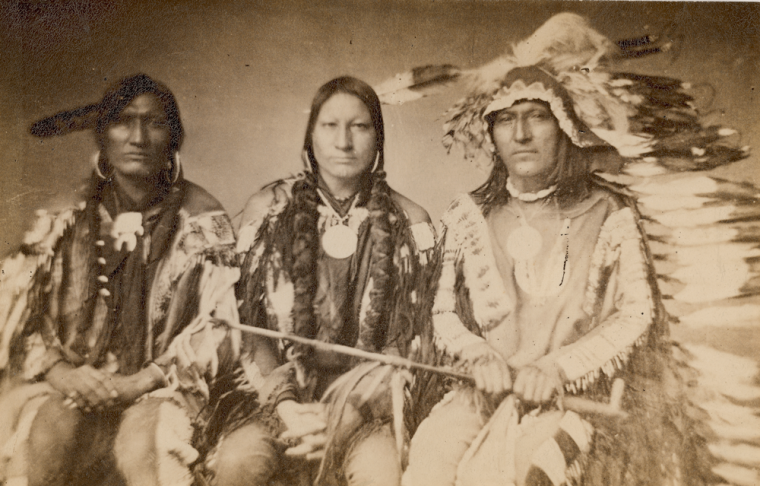 Southern Cheyenne delegates to Washington, D.C. (from left) White Antelope, Alights On A Cloud, and Little Chief. Later copy made by A. Zeno Shindler of an 1852 daguerreotype by St. Louis photographer John H. Fitzgibbon. The daguerreotype was probably made on their way home from Washington, D.C., where they received the peace medals they are wearing from President Millard Fillmore. National Museum Of The American Indian Photo Archives (P15814)

Southern Cheyenne delegates to Washington, D.C. (from left) White Antelope, Alights On A Cloud, and Little Chief. Later copy made by A. Zeno Shindler of an 1852 daguerreotype by St. Louis photographer John H. Fitzgibbon. The daguerreotype was probably made on their way home from Washington, D.C., where they received the peace medals they are wearing from President Millard Fillmore. National Museum Of The American Indian Photo Archives (P15814) 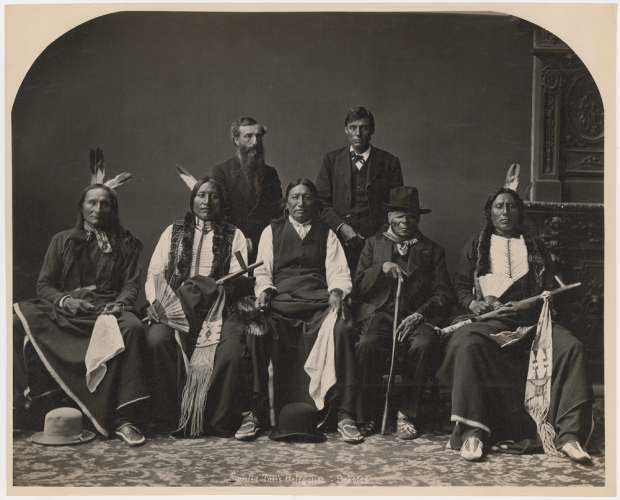 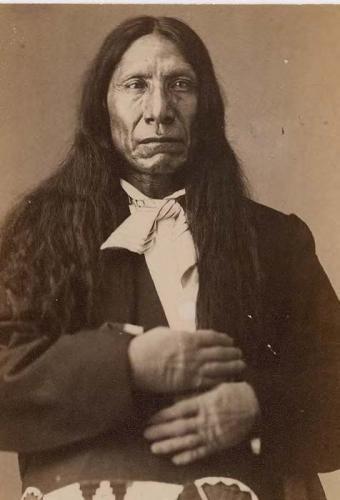 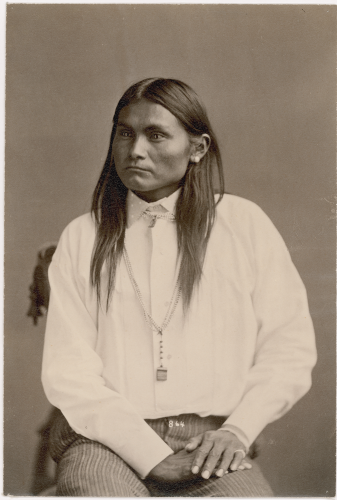 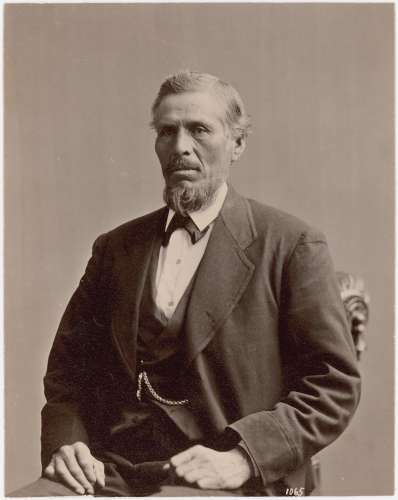 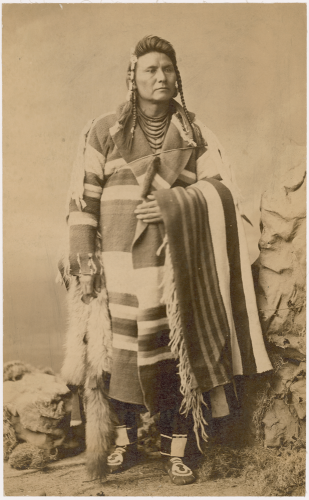 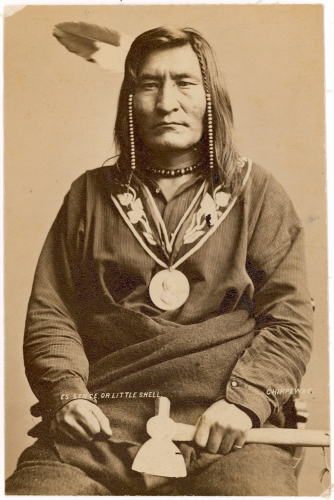 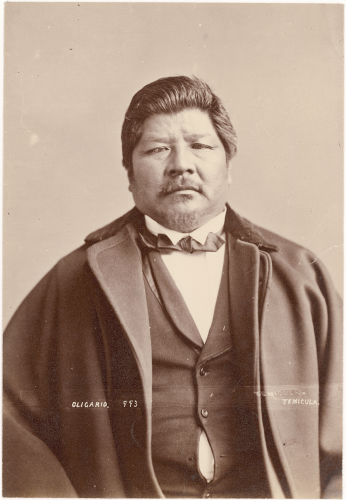 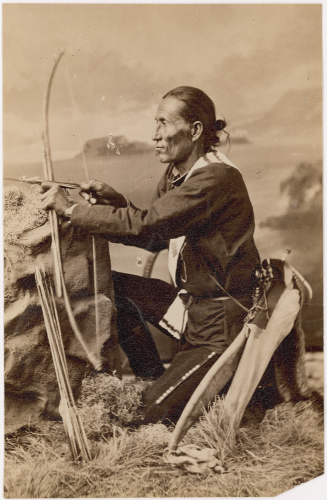 By the mid-19th century, the Smithsonian had already assembled a celebrated collection of painted portraits of American Indians. In 1859, Secretary of the Smithsonian Joseph Henry sought to supplement the collection, noting the great potential of photography to document “the different Indian deputations which from time to time visit Washington.” After a fire destroyed the paintings in 1865, Secretary Henry returned to the idea of photography with renewed vigor. He declared in an 1867 letter to the Commissioner of Indian Affairs that it was time to “begin anew.”

As his letter to the commissioner made clear, Secretary Henry had major ambitions for his photography project. Compared to painted likenesses, photographic portraits offered an unparalleled opportunity to amass “a far more authentic and trustworthy collection of likenesses of the principal tribes of the United States.” Much like his contemporaries, Henry valued photography over painting for its apparent objectivity. To him, photographic portraits of Native delegates allowed for the accurate visual documentation of persons as types, with the attributes of a single individual understood to represent an entire nation. Henry also noted that photographs could be easily reproduced and distributed “to any who might desire them.” Finally, the Secretary argued in his letter that “[t]he Indians are passing away so rapidly that but few years remain, within which this can be done….” He was no doubt aware that the delegates he proposed to photograph came to the capital to negotiate the very survival of their nations.

Henry was unable to secure support from Indian Affairs in 1867, but a like-minded patron soon came to the Secretary’s aid. Fewer than 10 years later, the Smithsonian’s inaugural photograph collection contained hundreds of delegation portraits, chiefly in the form of glass plate negatives. By the end of the century, the photographs numbered in the thousands; they are now housed at the National Museum of Natural History’s National Anthropological Archives (NAA).

As Henry had predicted, there was widespread demand for the Smithsonian’s delegation portraits. Vintage prints distributed by the institution are now scattered throughout museums, libraries and archives in the United States and Europe. In fact, this Museum inherited from its predecessor institution, the Museum of the American Indian – George Gustav Heye Foundation, hundreds of vintage prints made by the Smithsonian in the late 19th and early 20th centuries. Perhaps as the result of Henry’s emphasis on photographing types rather than individuals, the names of the Native delegates were often – and continue to be – incorrectly, inaccurately or not at all documented.

Our Museum is in the fortunate position to help set the record straight and to re-focus attention on the pictured individuals. For example, the Museum owns a group portrait of five members of an Otoe-Missouria delegation, who in the fall of 1880 arrived in Washington to negotiate the sale of their Nebraska–Kansas lands and the purchase of a reservation in Indian Territory. (In this case, the original negative is housed at the National Archives and Record Administration, but the NAA owns the negatives of the portraits made of each individual.) The men have long been identified as (left to right, front row) Standing Eating, Baptiste Deroin, Standing Buck, (left to right, back row) Crawfish Maker and James Arkeketah. Visual evidence in NAA’s collection suggested the misidentification of a few of the sitters, and so our Archive Center staff turned to Otoe-Missouria Tribe language director, Sky Campbell, for guidance.

Campbell not only amended the identifications of the delegates but crucially returned to them their Native-language names and provided accurate English translations. “Names are an incredibly important resource for language preservation and revitalization,” Campbell says, “as they offer insight into the thought processes and cultural worldview of a language that simple word lists usually can’t.”

According to Campbell, tribal nations often use the Smithsonian’s resources for language-revitalization efforts. He rightly asserts that it is “critical for the [Smithsonian’s] information to be as accurate as possible” because institutional “inaccuracies could become a part of that rebuilt language and have far-reaching consequences.” Through Campbell’s scholarship and work at language revitalization, we now know the photograph to picture (left to right, front row) Waruje Nayi (or Standing Eating), Munje Xanje (or Big Bear), Hari Gra (or Goes Far and Returns After He Found What He Was Looking For), (left to right, back row) Ma Ska Gaxe (or White Arrow Maker), and Chedo Nayi (or Standing Buffalo Bull, aka James Arkeketa).

By asserting the identities of the delegates, Campbell has reversed the original intent of an old photograph. The Otoe-Missouria delegation photograph no longer represents, to paraphrase Henry, a trustworthy likeness of an American Indian type but rather is a portrait of leaders of a nation, of prominent Americans. In the collections of the Smithsonian, there are many more such prominent Americans awaiting similar recognition.

Heather A. Shannon is the photo archivist at NMAI.

Sky Campbell is language director for the Otoe-Missouria Tribe.