The Persistence of Chicha

Eucivia Silva teaches her daughters to make the fermented beverage chicha de jora much in the same way her mother and grandmother taught her, as countless generations have done within the Urubamba River Valley and throughout the Andes. 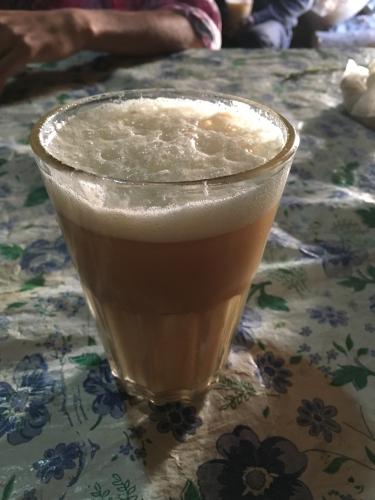 A contemporary glass qero of chicha served by a chicharia in Ollantaytambo, Peru, 2017. The word chicha comes from Spanish. It can signify a variety of beverages made from various grains, fruits and tubers, but the most widespread and traditionally important is chicha de jora, which is fermented from yellow or white corn. Photo by Justin Mugits.

A contemporary glass qero of chicha served by a chicharia in Ollantaytambo, Peru, 2017. The word chicha comes from Spanish. It can signify a variety of beverages made from various grains, fruits and tubers, but the most widespread and traditionally important is chicha de jora, which is fermented from yellow or white corn. Photo by Justin Mugits. 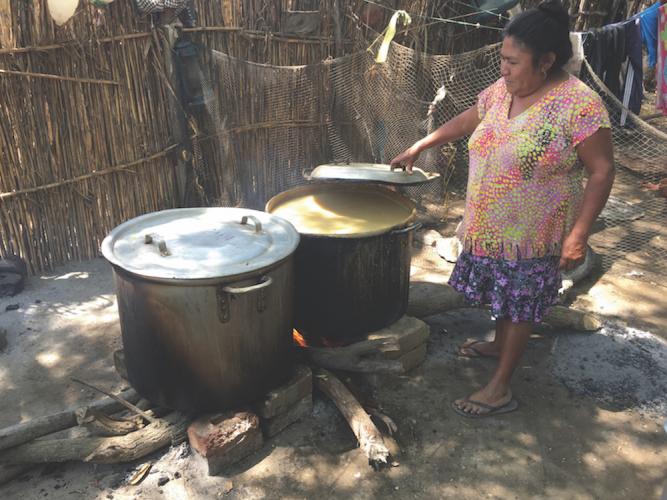 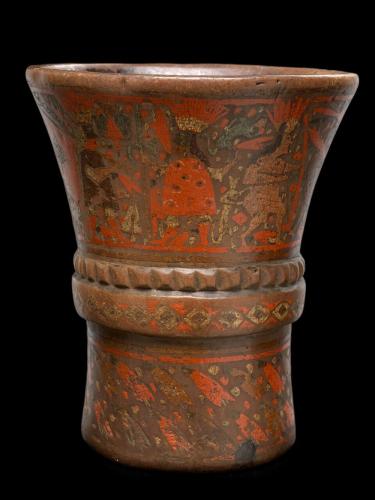 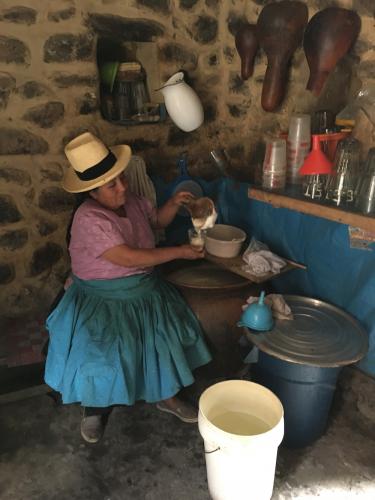 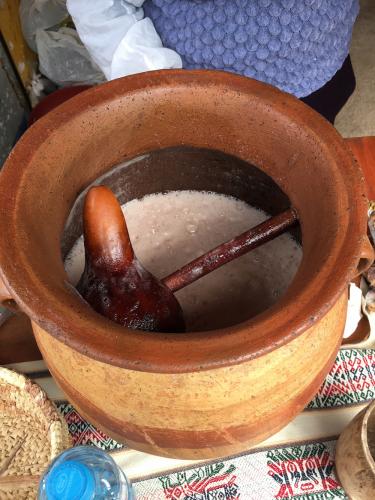 Chicha frutillada with strawberries added for flavor, topped with a strong head of foam, Maras, Peru, 2017. Photo by Justin Mugits.

Chicha frutillada with strawberries added for flavor, topped with a strong head of foam, Maras, Peru, 2017. Photo by Justin Mugits. 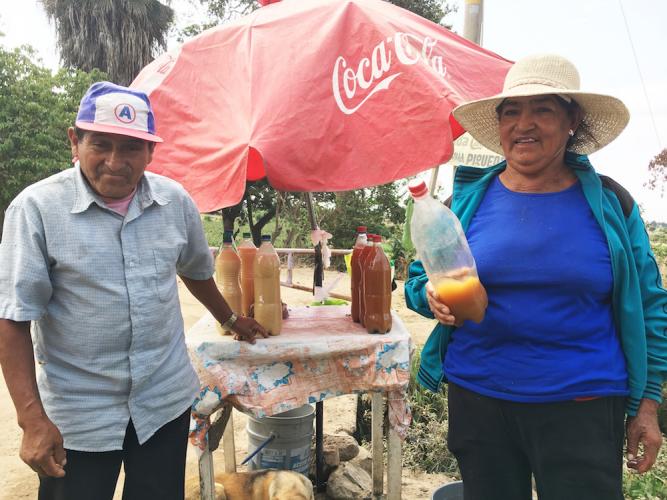 Chicha vendors in Trujillo, Peru offering two different samples at their roadside stand: a chicha blanca made with white corn and white refined sugar and a typical chicha made with yellow corn and chancaca. 2017. Photo by Justin Mugits.

Chicha vendors in Trujillo, Peru offering two different samples at their roadside stand: a chicha blanca made with white corn and white refined sugar and a typical chicha made with yellow corn and chancaca. 2017. Photo by Justin Mugits. 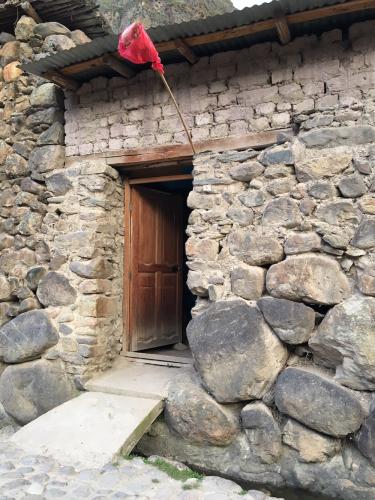 A chicharia denoted by the red flag hung above the door, which signals that chicha is for sale, Ollantaytambo, Peru, 2017. Photo by Justin Mugits.

A chicharia denoted by the red flag hung above the door, which signals that chicha is for sale, Ollantaytambo, Peru, 2017. Photo by Justin Mugits.

Eucivia pours the day’s first chicha into a cup known as a qero and intentionally pours a bit on the floor, quietly making an offering to Pachamama, the name of the Andean earth deity in her first language of Quechua. Chicha has been consumed in the Andes for thousands of years. Although both chicha de jora and the Pre-Inka deities have been repressed, deemed degenerate, transformed, co-opted and reinvented since colonization, Eucivia Silva’s invocation serves as a link to Andean traditions. It also demonstrates evolution. Throughout its history, chicha has served as a sacred beverage for pre-colonial cultures and maintained the social fabric of communities through reciprocity. It now persists as an emblem of Indigenous identity.

Chicha de jora is perhaps best known outside of the Andes as a drink for which the brewers often chew corn as part of the fermentation process. The word chicha comes from Spanish. It can signify a variety of beverages made from various grains, fruits and tubers, but the most widespread and traditionally important is chicha de jora, which is fermented from yellow or white corn. Originally called a’qa in Quechua, the language of the Inka and k’usa in the Aymara language, it can be found in locations ranging from a trendy bar in the central university district of Bogota, Colombia, dank chicharias in small towns throughout Ecuador, Peru and Bolivia and as far afield as immigrant enclaves in Queens, N.Y. Archeologists have found evidence of chicha production at locations throughout the Andes, including Inka and Wari breweries and extensive collections of chicha qeros belonging to the Tiwanaku culture. Some archeologists argue that chicha is as old as the Chavin culture dating to around 900 BC.

Throughout the Andes chicha is produced in much the same fashion, although regional preferences produce slight variations. In Chatito on the North Coast of Peru, Josefa Sullon Silva and Asunciona Chero Nizama start with corn kernels that are sprouted, dried, ground, boiled in water, chewed, boiled again, strained and allowed to ferment in large ceramic vats for a day or two before being served in a dried gourd known as a poto. The enzyme diastase in saliva breaks down starches into sugar, critical for the fermentation process. In some regions, chancaca or unrefined sugar is added, allowing the chicha to ferment longer, increasing the alcohol content and sweetening the finished product. In other regions such as Trujillo or Cuzco, white sugar, cinnamon, cloves, fruits or quinoa can add flavor. In warmer lowland areas like Chatito, brewers chew the corn before boiling to forestall the warm temperature from inducing rotting during the process. Meanwhile Eucivia, living in the cooler highlands, does not chew the corn, since it can ferment over a longer period of time. In the Ecuadorean and Peruvian jungle another fermented variant of chicha uses manioc instead of corn as the base.

In pre-colonial societies, chicha served as a ceremonial beverage; it maintained societal bonds, toasted ancestors and invoked the supernatural. In the Inka empire an order of chosen virgin women known as Acllas were charged with ritual duties that included tending to terraces of sacred maize and the brewing of chicha for imperial use. The Inka used chicha to reaffirm the social hierarchy of the empire during ritualized feasting and political as well as religious ceremonies. The Sapa Inka or his representatives traveled through the empire to extend drinking invitations. This invitation was always from superior to inferior; it was a token of favor with an attached indebtedness. Toasts between lords and vassals carried the significance of treaties. Special pairs of intricately carved identical qeros were used for these toasts, and they displayed identity, rank and religious beliefs as well as political and social relationships. In similar fashion the Sapa Inka or local lords held feasting ceremonies in which chicha was distributed and in-kind communal or imperial work was expected as reciprocal repayment of the debt. This communal work included canal- and road-building and maintenance. By this reciprocity, chicha served as a lubricant that kept the Inka empire running.

During colonization, the Spanish authorities and the Catholic Church restricted chicha brewing and consumption. In 1566 the distribution of chicha or other alcoholic beverages to Indigenous people was banned in northern Peru by Dr. Gonzalez de Cuneca, Visitador of the North Coast. This ban unraveled the obligations between local rulers and subjects. The local rulers were unable to marshal the collective labor of their subjects and in turn could not meet Spanish tribute demands. One local ruler complained that “the Indians do not obey us, we cannot finish the communal sowing nor build the community center because it is by the means of chicha that the Indians obey us.”

As the colonial government and Catholic Church worked to disassemble the Indigenous social and political structures, ritualized chicha drinking was repressed, but social drinking became more common in households and small breweries that became known as chicharias. At the communal level, reciprocal obligations of chicha production and consumption persisted. Throughout rural areas of Peru chicha continues to be used as an in-kind payment for communal work such as house raising.

Although chicha continued to be popular across social groups in colonial times it began to decline dramatically in the late 19th and early 20th centuries. The nascent nations of the Andes struggled to forge new identities following independence from Spain and considered native traditions and ceremonies to be uncivilized. Racially charged campaigns against native traditions associated chicha with poor hygiene, criminality and laziness. As a result of these campaigns, chicha and other Andean traditions became stigmatized and considered shameful and embarrassing, a phenomenon repeated throughout the hemisphere.

In the early part of the 20th century the Indigenismo movement spread throughout Latin American countries. It confronted racist national ideologies that treated Indigenous culture as degenerate. The Indigenismo movement sought to defend native cultures and champion their achievements. The movement heralded chicha as a symbol of the illustrious civilizations that preceded colonization. To this day chicha continues to serve as a rallying point for Native people. In 1992 tens of thousands of Indigenous people mobilized from around Ecuador and converged in Quito demanding self-determination, representation and social justice. Organizers instructed participants to bring chicha, dress in traditional clothes and bear instruments and pottery. These items are all an assertion of Native identity. The importance of chicha both historically and in a contemporary context is an affirmation of that identity.

But as chicha consumption continues to shrink in favor of soda, beer and liquor, a chicha renaissance becomes less of an everyday reality. If you ask for chicha in cities in Peru, Bolivia, Ecuador or Colombia you will probably be directed to the slums surrounding the city centers. It can also be found in many small towns throughout the countryside but almost never in westernized city centers. Surprisingly though, the historic drink has recently been popping up in some unexpectedly genteel locations. In 2014 Off Color Brewing in Chicago, Ill., released a “Wari Chicha De Molle Inspired Ale” that is distributed across the United States, even at some Whole Foods grocery stores. It is made in cooperation with the Field Museum in Chicago, which had been conducting excavations at the Wari Cerro Baul site which includes the remains of a chicha brewery. La Portal de Chorro, in central Bogota’s Candelaria district, has become a fashionable place for students to drink chicha. Gaston Acurio, the renowned chef and ambassador of Peruvian cuisine, serves the drink in his two upscale restaurants in Cuzco and Arequipa, aptly named “Chicha,” which primarily serve well-heeled tourists. These products vary in their adherence to tradition and can easily be seen as commodification and co-option of the tradition, just as many Native cultures and traditions have been appropriated throughout history. Alternatively, the comeback of chicha may inform an Indigenous revival.

The societal bonds created via chicha consumption persist. Although they have evolved over the centuries under intense pressure, they provide a continuous Indigenous reference point connecting communities that are otherwise diverse. As the chef Acurio said about his decision to name his restaurants after the drink, “Chicha unites all of Peru. In all the Andes and all the north coast, chicha is drunk and brewed. It was the ceremonial and daily drink of our ancestors.

“The idea for Chicha restaurant is that one day it will be in all the cities of Peru that receive visitors and that in each city, the cuisine, customs and local diversity will be celebrated. In all these cases the product that always seems common, almost the only one, is chicha. That’s why we did it.”