A Virtual Tour of History: Photo Archives Offer a Window Into Indigenous Life and Photography’s Evolution

As many teachers, parents, students and researchers discovered while self-quarantining this spring, the need for online resources is greater than ever. The National Museum of the American Indian recently expanded its bounty of online resources, offering even more behind-the-scenes glimpses into its vast collection of more than 820,000 objects. 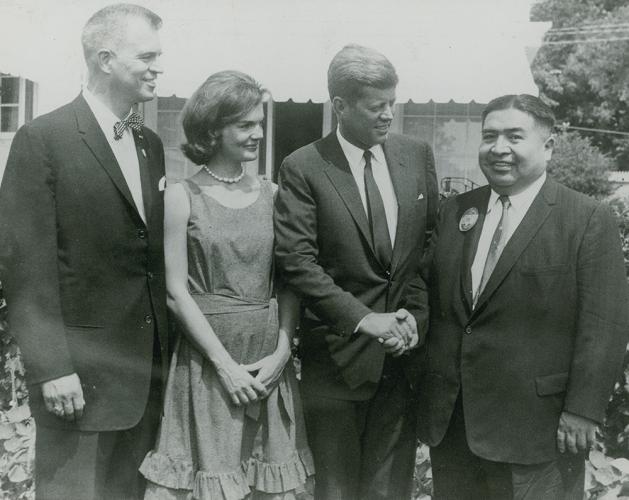 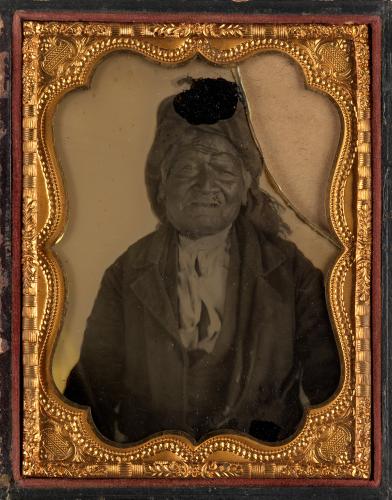 The cracked ambrotype portrait of Chief Okemis of the Anishinaabe (Ojibwe) was made in Cheboygan, Michigan, in 1858. Wounded in battle during the War of 1812, Okemis signed the 1819 Treaty of Saginaw, in which tribes ceded 6 million acres in southern Michigan to the United States. He was almost 100 years old when he was photographed. Donated by Sarah Imhof. P12521A. Photo by Henry H. Smith

The cracked ambrotype portrait of Chief Okemis of the Anishinaabe (Ojibwe) was made in Cheboygan, Michigan, in 1858. Wounded in battle during the War of 1812, Okemis signed the 1819 Treaty of Saginaw, in which tribes ceded 6 million acres in southern Michigan to the United States. He was almost 100 years old when he was photographed. Donated by Sarah Imhof. P12521A. Photo by Henry H. Smith 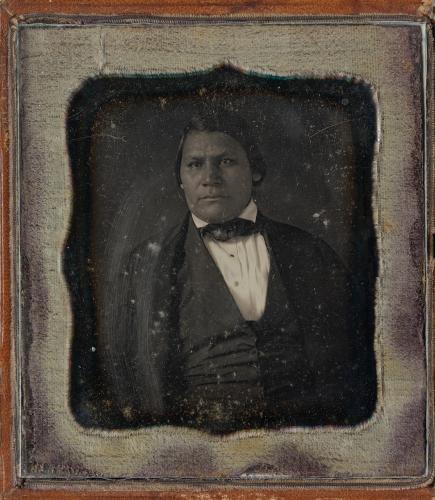 Cased in leather, this daguerreotype of Cayuga tribal chief Wa-o-wa-wa-na-onk, also known as Peter Wilson, was made in the 1850s. Handwritten inside the case is “Wa-o-wa-wa-na-onk to his friend P.E. Thomas—Sa-ga-oh.” Wilson was a signatory to the 1838 Second Buffalo Creek Treaty, which attempted to relocate the Haudenosaunee (Iroquois Confederacy) nations from New York state. However, he later said the treaty was fraudulent. He earned a medical degree from Geneva Medical College in 1844. P25296A. Photo by Philip E. Thomas

Cased in leather, this daguerreotype of Cayuga tribal chief Wa-o-wa-wa-na-onk, also known as Peter Wilson, was made in the 1850s. Handwritten inside the case is “Wa-o-wa-wa-na-onk to his friend P.E. Thomas—Sa-ga-oh.” Wilson was a signatory to the 1838 Second Buffalo Creek Treaty, which attempted to relocate the Haudenosaunee (Iroquois Confederacy) nations from New York state. However, he later said the treaty was fraudulent. He earned a medical degree from Geneva Medical College in 1844. P25296A. Photo by Philip E. Thomas 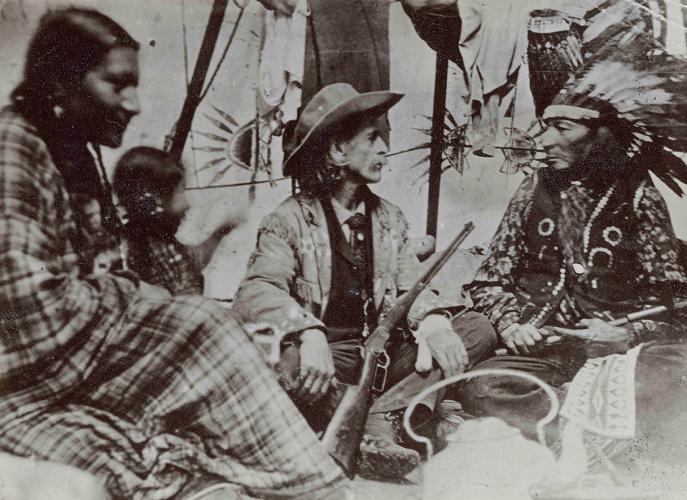 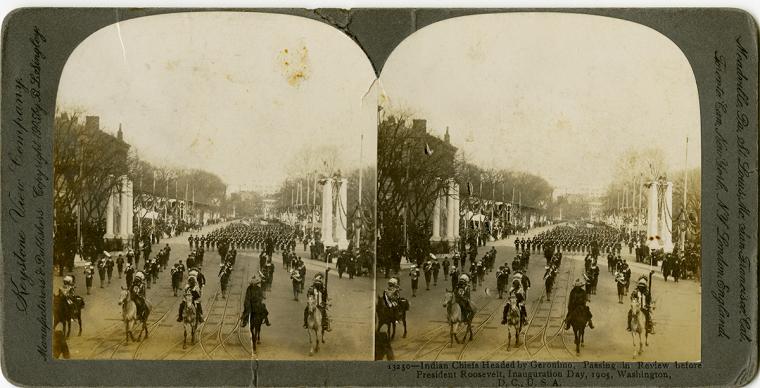 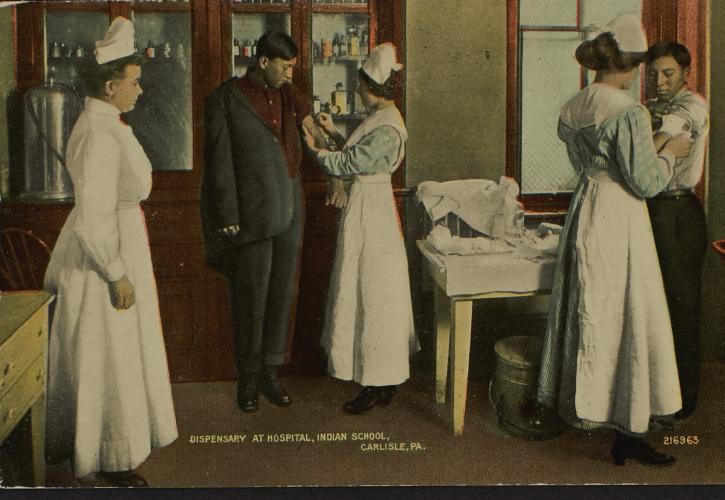 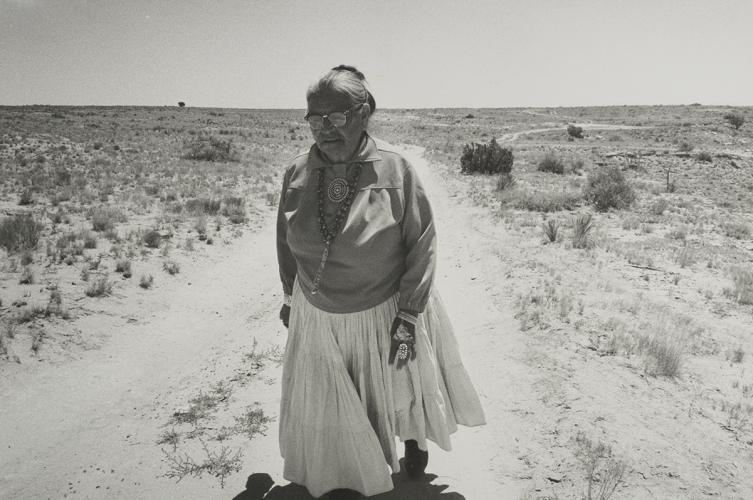 Captured by professional photographer and filmmaker Ann Bromberg in New Mexico in 1996, this is one of her five evocative images in the NMAI collection depicting the life of To’hajiilee sheepherder Dorothea Begay (Diné [Navajo]). Ann Bromberg Photograph Collection. NMAI-088_001_000_001. Photo by Ann Bromberg

Captured by professional photographer and filmmaker Ann Bromberg in New Mexico in 1996, this is one of her five evocative images in the NMAI collection depicting the life of To’hajiilee sheepherder Dorothea Begay (Diné [Navajo]). Ann Bromberg Photograph Collection. NMAI-088_001_000_001. Photo by Ann Bromberg

In January, NMAI increased the number of images of ethnographic and contemporary art objects in Smithsonian’s Online Collections Search Center (collections.si.edu) from about 38,000 objects to more than 122,000. This 10-year effort not only grew NMAI’s collection online but also helped update the museum’s records. Staff researched each item’s information, determining as much of its history as possible, from its creation until its acquisition.

The NMAI collections now housed at the NMAI Cultural Resources Center in Suitland, Maryland, have a rich history, beginning more than a century ago with the efforts of passionate collector George Gustav Heye. In 1916, he founded the Museum of the American Indian–Heye Foundation (MAI) in New York City, the predecessor of NMAI. Unlike museum staff today, Heye did not usually include detailed documentation with objects. Since MAI became the NMAI in 1989, the museum’s staff has been unlocking the origins of its original collections, which has helped expand the online records of NMAI objects in Smithsonian’s online collections.

Some of NMAI’s most engaging pieces within its collections are its more than 500,000 photographs and films. Of these, nearly 25,000 photos can be found in the Smithsonian Online Virtual Archives, or SOVA (sova.si.edu). This portal contains the manuscripts, correspondence, field notes and photographs of anthropologists and ethnographers; photographs by agents of the Bureau of Indian Affairs; projects by documentary photographers and photojournalists; the papers and personal family photographs of civil rights advocates and other leaders; as well as postcards, illustrated trading cards and advertisements.

The photos in the NMAI collections date from the 1840s to the present and cover American Indian and other Indigenous communities throughout the Western Hemisphere. They capture scenes of everyday Native life and traditions as well as poignant moments in history, such as tribal leaders at treaty signings, presidential inaugurations and presentations of the Presidential Medal of Freedom. “The value of historical photography is that it is a window into people’s lives,” says NMAI’s Head of Archives and Digitization Michael Pahn.

Some photos, postcards and advertisements in the collection also demonstrate how American Indians were offensively portrayed as stereotypes or attractions, such as the performers in Buffalo Bill’s Wild West show. “We have to look at these critically,” says Pahn, “and think about the biases that the photographers brought with them as they took those images.”

The value of images in the archives are not only what they show, but that they are stepping stones along the evolution of photography. Despite the widely held yet false belief by non-Native people that many American Indians in the 19th century thought the camera was a “shadow catcher” that could remove an individual’s spirit, the archive has many images from photography’s earliest days.

Among these are rare portraits of American Indians. The daguerreotype of Wa-o-wa-wa-na-onk, also known as Peter Wilson, set in an expensive leather case is an exceptional example. Like many who had daguerreotype portraits made, Wilson was an important leader. He was born on the Seneca Nation's Buffalo Creek Reservation (which was abandoned in 1845) in western New York state and advocated for Indian and treaty rights. The daguerreotype process was popular in America from 1840 to 1860. Using a wooden box camera, the photographer captured the image directly onto a silver-coated copper plate. After opening the lens cover to expose the plate to light, the daguerreotype was created by holding it over hot mercury until an image appeared. Many of the first photographers in Europe and America died of illnesses related to the dangerous chemicals used in making such images.

In the 1850s, the ambrotype (a cased image exposed on glass) and then the tintype (a cased, metal-coated image) portraits were less expensive to make and quicker to capture a sitter’s likeness. Large and small images were produced from glass negatives for many decades during the late 19th century, and are apparent throughout NMAI’s photo collection.

By the mid-1850s, albumen paper prints began to be made from negatives by using the albumen in egg whites to coat the paper. This would bind photographic chemicals used to create the image to the paper. One photographer who used this process was Alexander Gardner, a Scottish-born photographer who excelled at wartime photography. He worked for the now-famous photographer Mathew Brady in his Washington, D.C., studio before capturing images of the scenes and soldiers of the Civil War. Gardner then traveled West with General William T. Sherman to document meetings, people and locations during the early years of the American Indian Wars of 1866 to 1868. The Gardner albumen paper prints in the NMAI archives are from Sherman’s personal collection.

The stereograph card was a popular product produced from 1850s to the 1940s. Two nearly duplicate images were set side-by-side on a card that was inserted into a viewer that combined the image and made it appear three-dimensional. Initially made for entertainment purposes, they also have historic value. One stereograph card in NMAI’s collection, for example, shows the parade for Theodore Roosevelt’s presidential inauguration.

From the 1880s through much of the 20th century, most photographs were black-and-white silver gelatin paper prints. Images such as these are created when exposed onto a suspension of silver salts in gelatin coated onto a surface such as glass, plastic, film or paper. The use of baryta-coated paper to produce glossy prints, however, didn’t become popular until the 1920s and 1930s. The NMAI collection includes some unique prints, such as American Indian leaders meeting with U.S. presidents Richard Nixon and John F. Kennedy.

While experiments with color photography began as early as the 1850s, it didn’t really take off until the Eastman Kodak Company modernized color film in 1935. While cameras and developing processes improved over the following decades, photography leaped forward with the advent of digital images in the late 1990s. Digitization has nearly eliminated the need for camera film, and photographers now capture thousands of images anytime, anywhere. Today, the NMAI archives serve not only as a repository of historical images and objects from the past centuries but the works of contemporary Indigenous artists, activists and organizations.

In addition to serving as a research and teaching resource, the NMAI’s online archives provide an entrée into the museum’s collections at its Cultural Resources Center. While these collections help produce the scholarship for museum and online exhibitions, publications, articles and educational programming, even more importantly, they help connect Indigenous communities to the history of their peoples. Scheduled visits to the center offer the opportunity for tribal community members to view and study objects and photographs as well as their records.

NMAI archives staff, led by archivist Emily Moazami, conduct extensive research to determine the circumstances under which these images were taken and any sensitive cultural content that would prohibit the public from viewing them. In addition, as stereotypical views of American Indians are perpetuated when historic photographs only describe their subjects as an American Indian or a person of a certain tribe, NMAI staff work with community members to “return people’s individuality to them by identifying them in photos,” says Pahn. “A photograph takes something abstract like a memory of someone you never got to meet and makes that person more real. How powerful and moving it is for them to see images of their ancestors.”

On February 25, the Smithsonian launched Open Access (si.edu/openaccess), an additional online database that offers almost 3 million images that are available to download, share and use. These 2D and 3D digital files are from all of the Smithsonian’s 19 museums, nine research centers, libraries, archives and the National Zoo. Open Access items have a Creative Commons Zero (CC0) designation, which means they are in the public domain and free of copyright restrictions. NMAI curatorial, archival and collections staff carefully selected the 180 images of objects from NMAI’s collections available through this database, as many of NMAI’s items have cultural sensitivities that would prevent them from being available for public viewing or use.

As research continues to determine the origins of NMAI’s objects and photographs, more of the collection will become available through Smithsonian’s online databases. Until then, NMAI’s robust online resources serve anyone interested in learning more about Indigenous communities across the Western Hemisphere and will only prove more valuable as time goes by.

Michelle Delaney is a photo historian and assistant director for History and Culture at the National Museum of the American Indian.