Ofelia Zepeda: A Langage for Praying

Ofelia Zepeda didn’t receive a birth certificate when she was born, she writes in one of her poems, because

“My parents are illiterate in the English language.

They speak a language much too civil
for writing.

It is a language useful for pulling memory
from the depths of the earth.

It is a language useful for praying with the
earth and sky.” 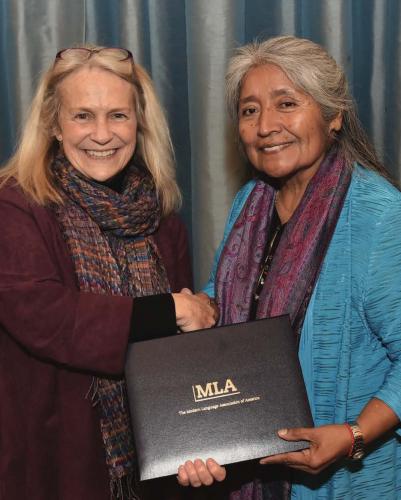 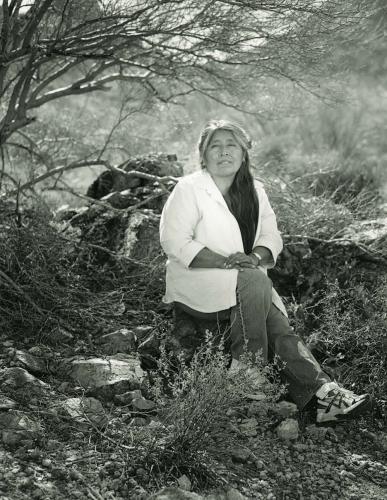 Photo by Tony Celentano, courtesy of The University of Arizona Press

Photo by Tony Celentano, courtesy of The University of Arizona Press

From her birth in Stanfield, Ariz., in 1952 to her current stature as an academic, linguist and a leading poet of the Tohono O’odham of the Sonoran Desert in Arizona and northern Mexico, Zepeda is a master of language, both English and O’odham (the language spoken by the Tohono O’odham, Akimel O’odham and Hia C-ed O’odham). Likewise, she is a fierce advocate for the reclamation and preservation of indigenous tongues. She has been honored as a MacArthur Fellow and, earlier this year, with a Distinguished Service award from the Modern Language Association. But her life and work is firmly rooted in himdag, the Tohono O’odham way of life that permeates the cultural, spiritual and physical realms.

Her birthplace Stanfield is a “Census Designated Place,” not even a town, in Pinal County, Ariz., a few miles north of the Tohono O’odham Nation. About 650 people, mainly Hispanic, live in the CDP’s four square miles. Memories of Zepeda’s rural upbringing permeate her poems. In “The Place Where Clouds Are Formed,” she remembers waiting for the school bus on a cold, wet December day in the cab of her father’s truck watching the clouds bringing rain, “We look out over the fields/ where fog clings to the soil.” The truck, “warm inside/having been at work since four a.m.”

In another poem, “Smoke in Our Hair,” the smell of smoke from her wood fire calls forth memories and lingers in her hair. “No matter how far we walk/we carry this scent with us.”

The sly humor of an exchange with a tourist watching a Yaqui Deer Dance catches the irony of a tourist’s expectations when viewing an indigenous dance against the realities of Native people having to make a living.

“What do they do with the money we throw
them?

Oh, they just split it among the singers and
dancer.

They will probably take the boy to McDonald’s
for a burger and fries.

The men will probably have a cold one.
It’s hot today, you know.”

Zepeda’s professional and poetic career has been devoted to preserving O’odham language and culture, but she has gone further to ensure that indigenous peoples would be entitled – at long last – once again to speak their languages. As an activist, she played a key role in getting Congress to enact the Native American Languages Act of 1990 (a year after Congress established the National Museum of the American Indian). The Act also gave Native languages official status in tribal government business. The passage of the Act had a ripple effect in support of language activists working to revitalize and support indigenous languages throughout the world.

Zepeda is a co-founder and longtime director of the American Indian Language Development Institute (AILDI), whose annual summer programs train American Indian teachers in language instruction and developing materials for children and adults. Zepeda has worked with more than 2,000 students, most of whom return to their tribal communities.

As the Regents’ Professor in the Department of Linguistics and American Indian Studies at the University of Arizona, Zepeda carries on her groundbreaking work to ensure that her tribal language is spoken daily and amongst all ages. Her textbook, A Tohono O’odham Grammar (first printing, 1983) is one of the first grammar books on the O’odham language and is an important archetype to the field of language preservation. She has worked with her students to transcribe and translate O’odham songs as a tool for understanding the artistic and cultural expression through song. Through her academic role and her work with O’odham language learners, she articulates a vision about language revitalization that builds linguistic and cultural identity in Native communities.

This vision inspires her own writing. Zepeda composes poems in both O’odham and English, demonstrating the beauty of indigenous languages for literary expression. According to one reviewer, “In poem after poem, she invokes realities that her language expresses, but English resists… Miraculously, Zepeda makes us hear echoes of her language through English – no small poetic feat.” And beyond her own output, since 1991 she has served as co-series editor of Sun Tracks, a prominent American Indian literary journal that has featured work by the most important Native writers. She also has given readings and talks at the Smithsonian and major poetry festivals, and has served as a trustee and advisor to the National Museum of the American Indian.

As a poet, Zepeda is grounded in her own personal experience growing up in a Tohono O’odham family and seeing the desert as both a home and a place of origin for her people. World Literature Today wrote of her bilingual collection Ocean Power: Poems from the Desert (1995), “Zepeda’s imagery captures the most subtle perceptions of the natural world – the smell of coming rain, the taste of dust – and her poems, deriving from tribal, family and personal memories, reveal an intense and characteristically Tohono [O’odham] consciousness of weather, sky, earth and water, of the landmarks which measure the passage of the seasons, and of nature in both its positive and negative manifestations.” Even the titles of her poems in Ocean Power exhibit O’odham worldview and life in the Sonoran Desert such as “S-ke:g S-he:pi” (The Pleasant Cold), “Ju:ki Ne’i” (Rain Songs) and “Ba:ban Ganhu Ge Ci:pia” (Coyotes Moving Along Over There).

Zepeda’s writing is the intersection of history and contemporary life, of traditions and modernity, and of the influence of a deep past on the present. Her poetry references tribal songs and traditions, the natural world and contemporary life in her community. Zepeda’s poems provide all of humanity with evidence of the need for linguistic diversity to fully understand the human experience and the world we inhabit.