Jazz and hip-hop met about four years ago at the Survival of First Voices Festival at San Juan College in Farmington, N.M., and decided they got along together very well. The result was the jazz/hip hop quartet known as DDAT, which released its self-titled debut CD in Spring 2018.

The group is the fusion of the Delbert Anderson Trio (DAT) with the solo rap performer Def-i, hence the acronymic name. DAT, the jazz trio, is comprised of Delbert Anderson (Bitaani Claashchi’i/Kinclichiinii Todachiinii Clans), Nicholas Lucero on drums and Mike McCluhan on upright bass. They have been playing as a group for a little better than five years, although they’ve known each other much longer. They met Def-i (Christopher Mike-Bidtah) about four years ago at the Festival. They’ve been performing together ever since. 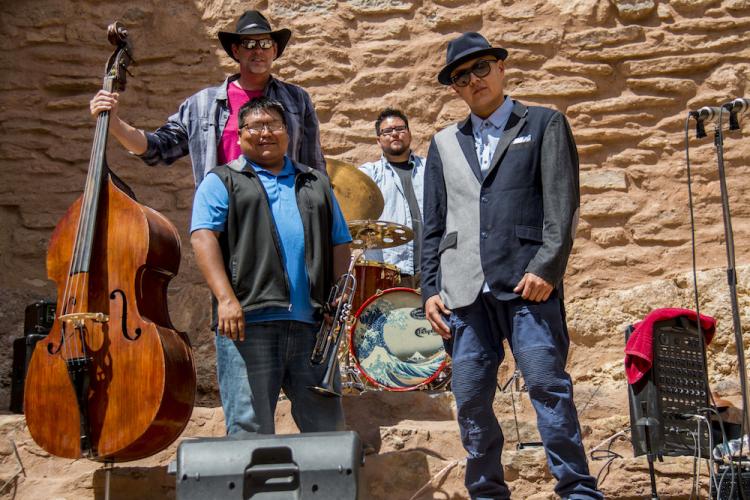 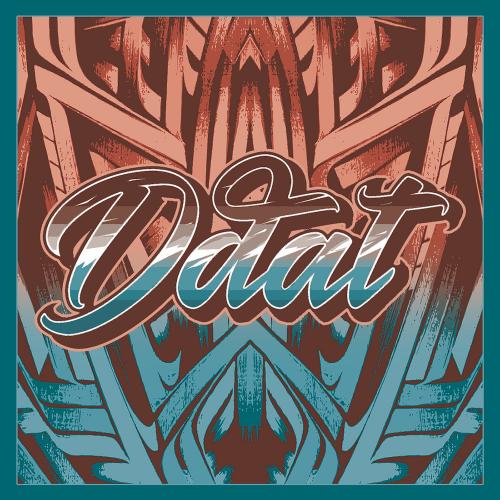 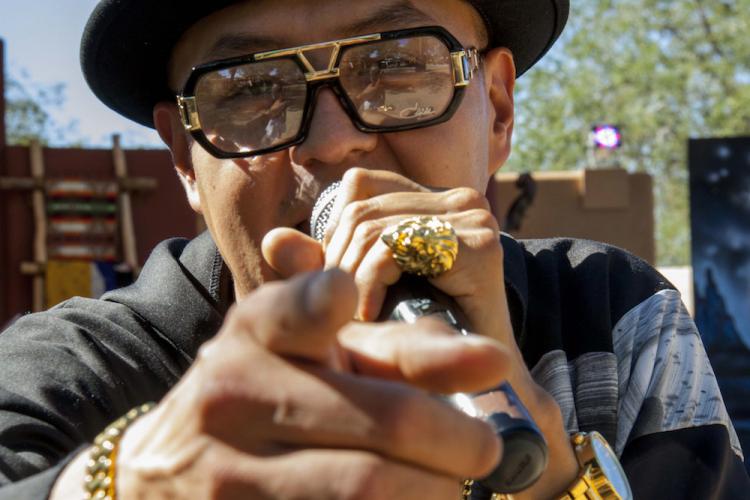 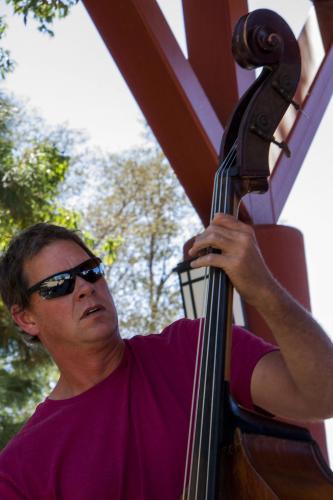 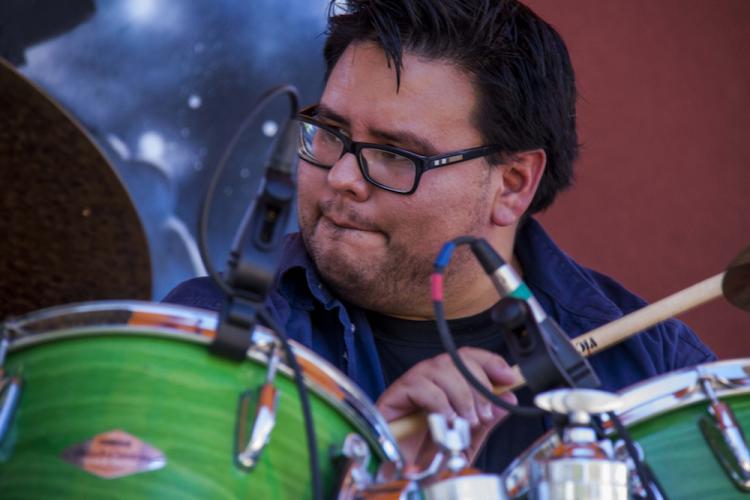 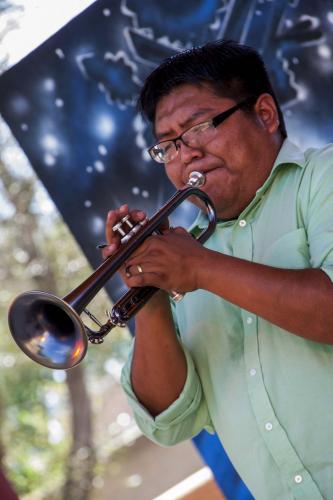 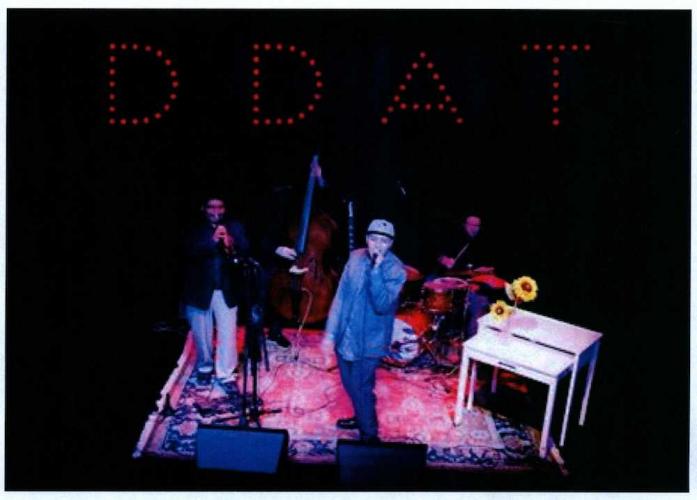 DDAT performs and educates at a variety of venues year-round, including the Sunflower Theater in Cortez, Colo. (above). Photo by Rory Pfotenhauer.

DDAT performs and educates at a variety of venues year-round, including the Sunflower Theater in Cortez, Colo. (above). Photo by Rory Pfotenhauer. 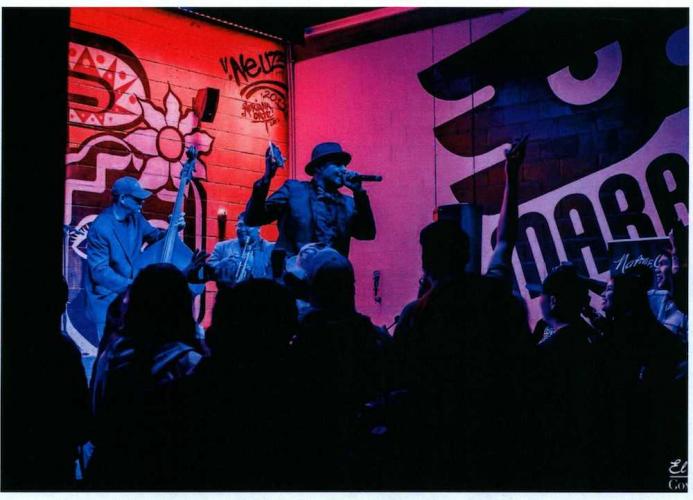 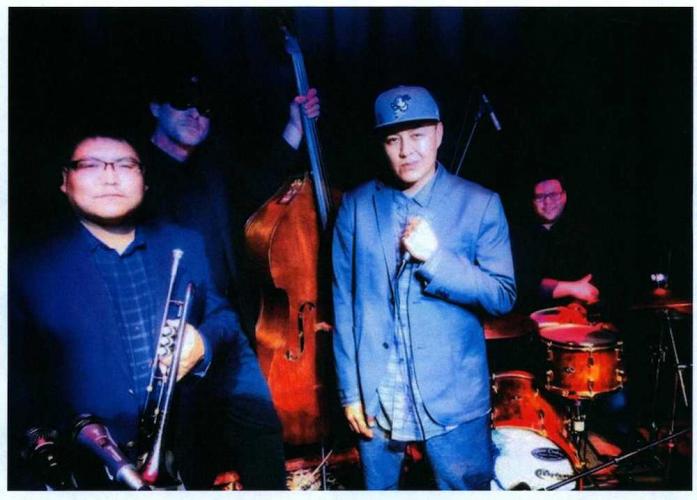 “We didn’t know him, personally,” Anderson says of Def-i. “But, when we played a show, we invited him to join us, freestyle. We put it together really quick. People really liked the different genres fused together.”

In true jazz tradition, the quartet began as pure improvisation. But it is now a directed collaboration, actually composing songs together. Anderson laughs, “We thought we would just keep going with it, keep pushing towards whatever it is. We’re still fairly new. But, there’s a lot in store.”

The DDAT sound is reminiscent of the jazzy/hip hop groups Digable Planets, Gang Starr and A Tribe Called Quest. But, where Digable Planets featured spoken word poetry over smooth jazz, DDAT mixes Def-i’s rapid-fire lyrics over more up-tempo, contemporary jazz and funk. In another key difference DDAT composes all its own original music, as opposed to sampling music from other musicians.

Anderson elaborates, “The Trio had the songs already. We just had to switch it up so Def-i could come in and rap over it. For our new release, those [songs] were specifically written for both of us. Usually, I’ll come up with a melody. And, I’ll take it to the group, and Nick composes his part. I don’t write out everyone’s part. And, Mike just sort of picks up what he wants to do. And, then, Def-i comes in.

“Once we bring it all together, we start to try to fuse it a little better, move things around a little – try to create some structure. Like when Def-i is singing, sometimes it’s just Def-i and the drums going at it. Sometimes, it’s just Def-i by himself.”

Anderson continues, “We know how each other are, as musicians. We’re all individual composers. But, we all know the fundamentals of playing with one another. We know how to collaborate. I think that’s what is really special about this group.”

The trio has its roots in the Farmington area. Lucero recalls meeting McCluhan at San Juan College about 15 years ago. “I was a young drummer, and he was this crazy, bass-playing guy with a ponytail and a black and white Rickenbacker bass.” They don’t limit themselves strictly to the jazz genre. Their broad range includes everything from jazz to pop funk. Lucero has toured with local and nationally recognized musicians over the course of his career. “I’ve played with Kevin Eubanks, Bud Shank [and] Greg Abate in the jazz realm,” he says. “And I’ve toured with The Ionics and Cold Fusion as part of the Vans Warped Tour.”

In the mold of the Wu-Tang Clan, the two musical groups still maintain their individual performance and recording identities. Def-i (Mexican People/Red Streak in the Water/ Many Hogans Clans) released his latest CD, Arrow Rhymanics, in April 2017. Staying true to hip hop culture, Def-i shares the spotlight with a few fellow artists. In particular, he makes a special effort to showcase the talents of several female MCs and rappers, including his close friends Honey, A. Billie Free and Cilena Gonzales. He says, “Having the female voice on this album was huge. I felt like I needed to add more of my female friends [in my] music projects.”

His latest release marks a significant departure from his previous recordings, in that it features other artists’ beats. He describes the process, “Usually I’ll have my own hand in. I’m producing my own music. But I did this whole project with none of my beats. I used other producers from across the country, [even some] from Canada. So, it’s a wide range of different kinds of beats. It’s not one style of production.”

DDAT, the combined group, prides itself on its mass appeal. Its shows attract audiences from across generations as well as across genres. Anderson, who also teaches music at San Juan College, says, “I think we have a really unique product. [We] relate to the younger crowd, who love hip hop. Who come from contemporary music. It also relates to a lot of the seniors who love the whole jazz aspect. We get comments like, ‘I never thought I would like hip hop.’ Or, some of the younger ones say, ‘I never thought I could find jazz that amusing.’ It’s really neat!”

Lucero echoes that point: “I’m able to improvise and move around and solo, which is unique for the hip hop genre. But, it speaks to our influences from the jazz and jam styles of music.”

Their musical expertise and gifts are not going unnoticed. Def-i was recently selected for the Next Level Musical Ambassador Program, an initiative of the U.S. Department of State’s Bureau of Educational and Cultural Affairs. Next Level brings people together and encourages greater understanding through the universality of music as a form of creative self-expression. It also builds on the historic legacy of the Department of State’s Jazz Ambassadors, who first traveled the world in the 1950s.

After traveling to Washington, D.C., for a two-day orientation, Def-i excitedly proclaims, “I am headed out soon to teach, learn and share with the youth of Nigeria as a U.S. Hip-Hop ambassador for beat making/music production. Love and light to all of the fam that truly believe in me. Your support truly means a lot! I was super-humbled and empowered by all of the artists that helped share, build, encourage and inspire me (and, each other) over these last few days of orientation.”

Def-i had a previous connection to the program in the form of fellow artist, Junious Brickhouse. The two met years ago while Brickhouse was traveling through Shiprock, N.M. Def-i retells, “After his service as an artist-educator, he became a co-director of the program and encouraged me to go through the application process. I was very impressed by the program and also highly respect the practitioners I knew that have participated in the program in previous years.” This is the fifth cycle of the program, with seven other countries participating in partnership. The Next Level program selects one artist-educator per hip hop element per country, so there will be 28 in total.

The young rapper was grateful for the opportunity to share not only his artistry, but his culture. “As a Diné MC, I have a unique story to offer along with my style and rhymes. I plan on just being myself and sharing what I have been gifted in hip hop. Mostly, I am looking forward to building with other MCs and I know Nigeria has amazing MCs throughout the country. I believe I will learn just as much as I plan to share.”

Anderson, the music teacher at San Juan College, plays a variety of instruments, He is a life-long musician who began singing and playing the drums at a mere three years of age in the church choir. He later developed a love for jazz. Stylistically, he has been heavily influenced by Lee Morgan, Sonny Rollins and Esperanza Spalding, among others.

He cites numerous supporters. “I credit my aunt, Cecelia Woodis, and uncle, Philbert Anderson, for pushing me as an artist and teaching me the importance of consistency. Other individuals who have made a difference in my life are my elementary and middle school band teacher, Janet Isham, and the faculty of Eastern New Mexico University: John Kennedy, Dustin Seifert and Chris Beaty.”

The Delbert Anderson Trio’s first album, Manitou, has received multiple Indigenous awards in New Mexico and on the West Coast. The album has also been recognized by NPR and Sirius Radio as Today’s New Jazz. One of the earliest collaborations performed by DDAT was the track “Roadrunner.” Anderson recalls, “I composed [that] piece for NPR’s Tiny Desk Concert competition. The trio performed it with hip hop lyricist Def-i. It received an NPR Top Ten Honorable Mention. It has also been featured on Yahoo and MIC.com as the best Native American jazz music piece.”

The album has also been recognized by NPR and Sirius Radio as Today’s New Jazz. One of the earliest collaborations performed by DDAT was the track “Roadrunner.” Anderson recalls, “I composed [that] piece for NPR’s Tiny Desk Concert competition. The trio performed it with hip hop lyricist Def-i. It received an NPR Top Ten Honorable Mention. It has also been featured on Yahoo and MIC.com as the best Native American jazz music piece.”

The DDAT sound is uniquely its own. Anderson attributes that to their relative isolation. Their removal from the din that can sometimes come from working in a larger city has helped them focus more on developing their own sound. As he sums it up, “We’re not trying to copy anyone else. Or, trying to incorporate ideas that we heard. Everything is just strictly staying here. All the ideas that come forth are emerging from this area. So, we’re using it to our advantage and coming up with a unique sound.”

The band members were as excited as their fans for the release of their debut CD. Anderson contrasts the experience with the making of his first CD, Manitou, as the Delbert Anderson Trio. He says the first recording “was actually made onstage at the Totah Theater, Farmington, N.M. We did a live performance. And, it was basically push record and stop. We didn’t get to edit anything or do anything special with it.”

This time, he says, the DDAT CD was made in an actual studio. “We were waiting for a while. It took a while, but we got it done.”

There is no greater testament to a musician’s skill than his connection with the crowd. Lucero recognized DDAT’s “aha moment” when “we played at Marble Brewing and I saw two floors of people jamming and enjoying the songs and solos and dancing. It’s one thing to rely on cultural influences and build an audience. But it’s a completely different thing to cross genres and cultures and stand on our own, as artists, rather than cultural clichés.”

Fans and potential fans alike can find these groups at ddatlive.com.

Jason Morgan Edwards (Seminole/African-American) began his career as a freelance writer and photographer in 2010, after retiring from the Environmental Protection Agency. He has written for Native Peoples, Indian Country Today Media Network, First American Art, Navajo Times and The Independent (Gallup), among others.