Mending the Border: The Indigenous Eye of Postcommodity

Immigration, violence and border protection are heated themes in Arizona and New Mexico, where the members of Postcommodity, the interdisciplinary arts collective, are based. For the collective, these discussions ignore or bury deeper realities: the continued indigenous presence on these lands as well as their history of indigenous human migrations. 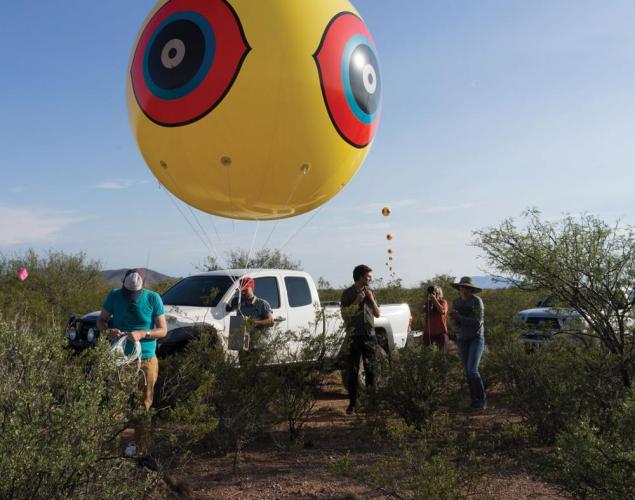 Postcommodity supporters installing one of the scare-eye balloons in Repellent Fence. Photos courtesy of Postcommodity

Postcommodity supporters installing one of the scare-eye balloons in Repellent Fence. Photos courtesy of Postcommodity 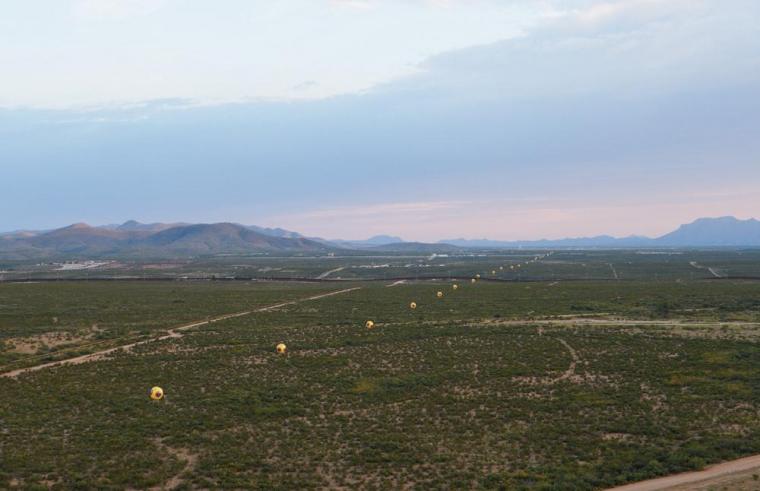 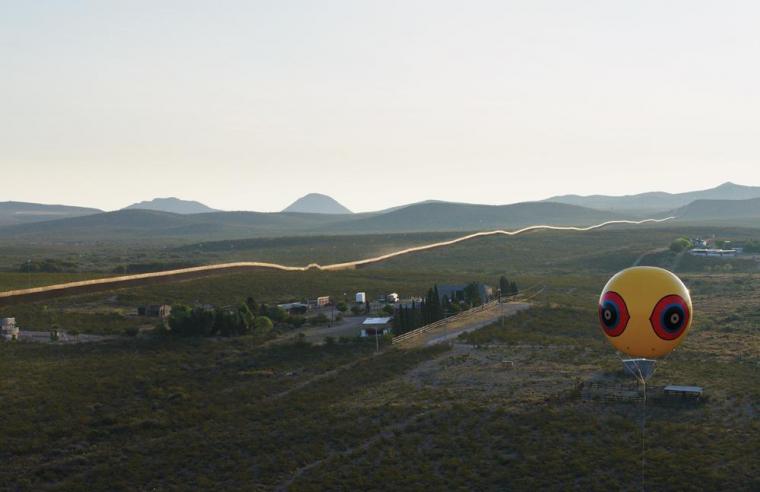 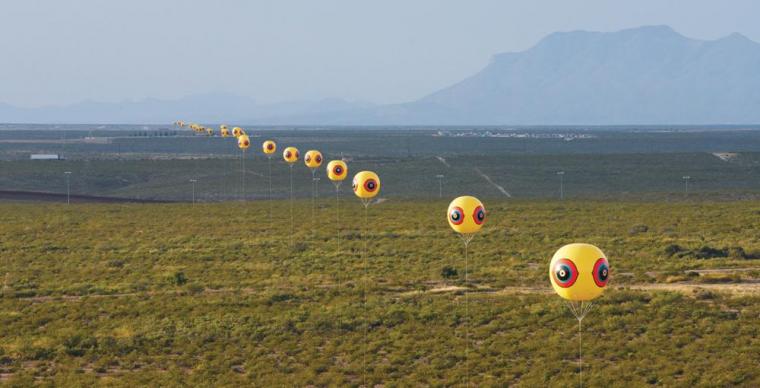 The Repellent Fence project obtained a memorandum of understanding between the towns of Agua Prieta and Douglas, facilitating bi-national dialogue and collaboration. Photos courtesy of Postcommodity

The Repellent Fence project obtained a memorandum of understanding between the towns of Agua Prieta and Douglas, facilitating bi-national dialogue and collaboration. Photos courtesy of Postcommodity

Immigration, violence and border protection are heated themes in Arizona and New Mexico, where the members of Postcommodity, the interdisciplinary arts collective, are based. For the collective, these discussions ignore or bury deeper realities: the continued indigenous presence on these lands as well as their history of indigenous human migrations.

"The hope is to offer an indigenous perspective on how this ongoing encroachment of a line/a fence/a wall, interrupts the land and the people who are birthed from them," commented Postcommodity member Raven Chacon in an interview with Indian Country Today Media Network about the group's examination of the U.S.-Mexico border. "We also hope that our work reminds American Indians that we have Native cousins south of this line, who are being stripped of their indigenous identities continually in the border discourse."

The members of Postcommodity, founded in 2007, are indigenous: Chacon is Navajo, Cristobal Martinez is Cherokee. Their training has equipped them for interdisciplinary work and the creation of large-scale projects. Born on the Navajo Nation, Chacon lives in Albuquerque, N.M., and is a composer of chamber music, performer of experimental noise music and an installation artist (Chacon is one of the featured artists in the NMAI-NY's exhibition Transformer opening in November 2017). Martinez, born in Santa Fe, N.M. is a digital designer, artist and critical-studies scholar who now lives in Phoenix, Ariz. Twist lives in Santa Fe and is an interdisciplinary artist working with video, sound, interactive media and installation environments.

In the 10 years since its founding, Postcommodity has presented multiple projects in North American and abroad. Much of its work addresses the land and people's relationships with the land and each other. The collective members position themselves "as catalysts in order to pave or leverage resources that help produce outcomes that reflect the self-determination of the peoples who live within the context." Through a shared indigenous lens, they use indigenous knowledge to articulate experiences through art and connect to the public sphere.

In November 2016, the Whitney Museum of American Art in New York City announced Postcommodity as one of the participants selected for its 2017 biennial, the longest running survey of contemporary art in the United States. From March to June 2017, the collective exhibited A Very Long Line (2016), a four-channel video installation with sound. Presented in a private room, the viewer is surrounded by four floor-to-ceiling video projections of the existing U.S.-Mexico border fence as shot from a vehicle. The videos accelerate and slow down at different speeds while pulsating, hissing, clicking and shrill sounds align with the video speeds. The effect is dizzying, restricting and hypnotic; the horizontal boards of the border fence seem never-ending and imprisoning.

According to Postcommodity, A Very Long Line "demonstrates the dehumanizing and polarizing constructs of nationalism and globalization through which borders and trade policies have been fabricated. The border 'fence,' irrespective of the complex indigeneity of peoples from the region it occupies, is a very long filter of bodies and goods - a mediator of imperialism, violence, market systems and violence capitalism."

The Huffington Post listed Postcommodity as one of the "10 Artists to Discover at the 2017 Whitney Biennial" and commented that A Very Long Line was "one of the most politically relevant and visually succinct works in the Biennial."

A very Long Line is an extension of an earlier work, Repellent Fence/Valla Repelente (2015), which also responded to the U.S.-Mexico border. Postcommodity received much media attention for Repellent Fence, the largest bi-national land art installation in the region, but the work had been eight years in the making. In October 2015, Postcommodity suspended 26 "scare-eye" yellow balloons over a two-mile span bisecting the U.S.-Mexico border. Anchored to the ground, each 10-foot diameter balloon ascended 50 feet in the air. Repellent Fence flew for four days and re-joined the towns of Douglas, Ariz., and Agua Prieta, Sonora (Mexico), which, since 2012, have been separated by an 18-foot-high steel border fence. Seen aerially, the installation acted metaphorically as a "suture, reconnecting two bodies of land that had been divided," says Twist.

Scare-eye balloons are bird-repellent devices which hang from trees to frighten birds from gardens and yards. Their large "eyes" resemble the eyes of an enormous predator. The balloons often work for a few days, but then the birds return. Postcommodity saw this device as an art object that happened to use indigenous medicine colors (yellow, red, black and white) as well as oblong concentric circles, a symbol used by indigenous peoples from Canada to South America. The scare-eye balloons, therefore, "constitute an indigenous semiotic system that demonstrates the interconnectedness of indigenous peoples throughout the Western Hemisphere."

In conceiving Repellent Fence, Postcommodity observed that other earthworks for land art projects tend to be about “the individual – the individual being out in the natural environment and having an internal psycho-spiritual reflection on their relationship with that natural environment…that impose more permanent transformations upon the land.” Instead, their work “does not privilege the narrative of the individual; it’s about looking at the ways that the land mediates relationships across diversity and across large groups of people.” The collective would not install a permanent structure nor impose themselves on a community without permissions and trust.

It took years of Postcommodity to find a location for Repellent Fence. They become interested in the towns of Douglas and Agua Prieta, because the adjoining towns are separated only by the border. Next, as Chacon explains, “we had to go through formal mechanisms. We had to work with government agencies, but first, we needed the support of the communities. We went through their discourses. You have to know what the community needs.” The project involved numerous partnerships and collaborations with towns-people, local municipalities, arts organizations, foundations and federal agencies in the United States and Mexico. A memorandum of understanding between the towns allowed a bi-national collaboration.

Postcommodity began securing funds for Repellent Fence in 2012 and received support from Creative Capital, the Joan Mitchell Foundation, Native Arts and Cultures Foundation and Art Matters. At least one member traveled to the area every two weeks to work on the project and live in the communities. Since Douglas and Agua Prieta already had a vibrant arts scene, community members planned and held a bi-national art walk with a series of public presentations. Repellent Fence became a metaphorical fence, allowing the communities to collaborate and turn the border fence invisible.

The documentary film Through the Repellent Fence detailed the proses of relationship-building in creation and land art installation. It premiered at the Museum of Modern Art. At the same time as the Whitney Biennial, Art in General, a Brooklyn arts organization, commissioned an art piece by Postcommodity which resulted in Coyotaje (2017), an immersive work about surveillance and decoy tactics employed by the U.S. Border Patrol to capture migrants.

Viewers enter a darkened room where voices in Spanish whisper, “come over here.” Then an enormous, green-glowing monster emerges. Upon closer inspection, the “monster” is actually an inflatable decoy with screens recording the movements of viewers. Coyotaje is a colloquial term in Mexico to describe the smuggling of people across the border. While working on Repellent Fence, Postcommodity spoke with border patrol agents and learned about the use of decoys to trap migrants. Coyotaje responds to the increased surveillance along the U.S.-Mexico border and reveals it to the public sphere.

Martinez says, “the U.S.-Mexico border is one of the most contested and militarized geographies in the Western Hemisphere. For us, thinking about how military and surveillance infrastructures are constructed upon the homelands of indigenous peoples interestingly provides an opportunity to connect narratives of indigenous self-determination with broader publics.”

The recent works by Postcommodity, A Very Long Line, Repellent Fence and Coyotaje, move beyond discussions of nationalism to uncover and border’s psychological, cultural, spiritual and economic effects on indigenous lands and bodies.

As Postcommodity told Art 21 Magazine, “it would be impossible to be indigenous artists in the Southwest and not attempt to produce work that acknowledges these issues – not in a manner that further polarizes people but rather one that encourages respectful public dialogue driven by the rich and dynamic environment of the borderlands.”