A Light at the Museum: Bringing a Massive Bronze to Life

The sculpture, reaching nearly 20 feet to the top of the fourth floor alcove ceiling, provides a popular resting and rendezvous place for visitors to the National Museum of the American Indian in D.C. Now the sculpture and surrounding walls will also be enhanced with light and animated projections. 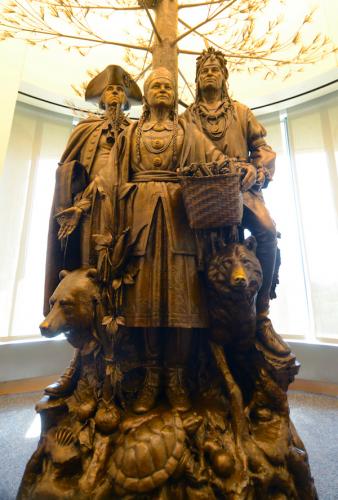 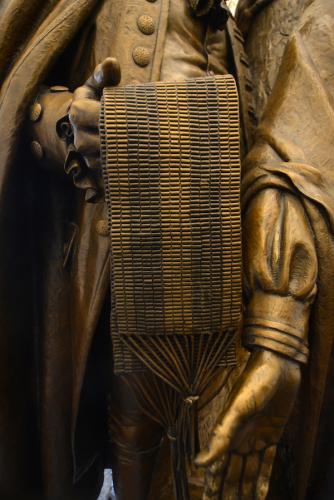 The landmark, the 2,200-pound tableau Allies in War, Partners in Peace, is a gift from the Oneida Indian Nation of New York. Originally presented to the Museum in 2004, it commemorates the aid the Oneida people gave to George Washington and his struggling Continental Army during the early days of the American Revolution. This fall, the Museum will install an interpretive surround, enhancing the storytelling of the statue with light, sound and projected imagery. The production was made possible by generous support from the Oneida Indian Nation.

The installation, the work of Utah-based sculptor Edward Hlavka, features three figures from the Revolutionary War, the Oneida chief Shenendoah, the Oneida woman Polly Cooper and George Washington himself. They stand under a towering White Pine tree, emblem of the Great Law of Peace uniting the nations of the Haudenosaunee or Iroquois Confederacy. The Peacemaker who forged the confederacy buried weapons of war beneath the roots of a white pine, and they are visible in the sculpture.

Intricate details of Oneida culture and history abound in the assemblage, such as a turtle, wolf and bear representing the three Oneida clans, and an eagle in the top branches of the pine, poised to warn the Nations of approaching perils. The tableau is so rich that the noted art critic, and at the time deputy assistant director of the Museum, Gerald McMaster said soon after the work’s unveiling in 2004, “We’ll have to ensure that an interactive display is nearby to point out these many, many details.”

This explanatory work will now fall to the sound, light and projected imagery display. It will tell the story of Polly Cooper, who accompanied a group of fellow Oneidas as they walked the 400 miles from their Central New York home to the Continental Army winter quarters at Valley Forge, Pa., during the harsh winter of 1777-78, bringing vital supplies. Cooper remained to aid the troops. The display will also explain the central role of the diplomat chief Shenendoah, also known as Skenandoah or Oskanondonha. The keeper of the wampum and its diplomatic record, he was instrumental in bringing the Oneidas to side with the colonials during the Revolution. A wampum belt appears in the statue in the hands of George Washington.

“We wanted a statue that would tell the story of how the Oneidas embraced the colonist’s cause of freedom, fighting beside their colonial friends and aiding them in their time of need,” says Keller George, Wolf Clan representative to the Oneida Nation’s Council and member of the Museum’s National Council. The new surround will do more than tell this story, however. Imagine the huge statue glowing in soft light as a voice fills the space, speaking in the Oneida language: “Let us come together in one mind and spirit. As one we give thanks for all that surrounds us.” The warm hues of light surrounding the sculpture fade into video: images of people dancing around a council fire with smoke curling skyward and forming dreamlike images to illustrate the storyteller’s oration. Stylized views of the earth, sky and water – the natural landscape as known by the Oneida people – are projected onto the curved walls of the space. An animated film in English then showcases the individual symbols and figures embedded within the sculpture. As part of the Museum’s unveiling of the enhancements, cultural interpreter staff will assist visitors in learning about the significance and detail of the sculpture. Says cultural interpreter Michaela Pavlat, a member of the Sault Ste. Marie Tribe of Chippewa Indians, “I look forward to sharing the history and symbolism represented in this sculpture with our guests from all over the world.”

Dennis W. Zotigh (Kiowa/San Juan Pueblo/Santee Dakota Indian) is a member of the Kiowa Gourd Clan and San Juan Pueblo Winter Clan and a descendant of Sitting Bear and No Retreat, both principal war chiefs of the Kiowas. Zotigh works as a writer and cultural specialist at the Smithsonian National Museum of the American Indian in Washington, D.C.