A part of Peru’s history began its journey home the summer, just in time for the country’s bicentennial of national independence on July 28. The National Museum of the American Indian returned the “Echenique Disc” to Peru particularly for the benefit of its Indigenous communities. The ceremony for the return of the Echenique Disc was held at the residence of the Peruvian Ambassador to the United States, Hugo de Zela, in Washington, D.C., on June 15. “In recognition of this important event and the tremendous significance the disc has for the people of Peru, I am proud to mark this moment together,” said NMAI Acting Director Machel Monenerkit. 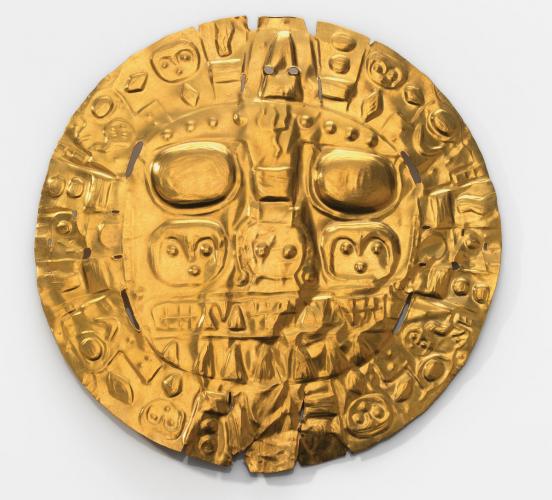 The “Echenique Disc,” a chest ornament made of gold, silver and copper alloy and about 5.3 inches in diameter, is thought to originate from Cusco, Peru, sometime in the last 3,000 years.

The “Echenique Disc,” a chest ornament made of gold, silver and copper alloy and about 5.3 inches in diameter, is thought to originate from Cusco, Peru, sometime in the last 3,000 years.

The exact origins and purpose of this chest ornament remain a mystery. Thought to date from 800 B.C. to A.D. 1, various scholars through the years have speculated that its design contains icons that could include everything from a lunar calendar or zodiac, to spirits of Andean plants and flowers around its border, to the face of a “feline sun deity” at its center.

The disc is named after Peruvian President and General José Rufino Echenique, who observers noted in 1853 had such a gold ornament. In 1912, George Gustav Heye, the founder of the Museum of the American Indian–Heye Foundation (the predecessor institution of the NMAI), purchased the gold disc from Eduard Gaffron, a German physician and antiquities collector in Peru. It then became part of the museum’s collection and was given object number 3/4875. In 1986, the City of Cusco adapted the ornament’s design as its official symbol and coat of arms.

A memorandum of understanding between NMAI and the Peruvian government to facilitate the return of the ornament was signed by Monenerkit and the Minister of Foreign Affairs for Peru Ambassador Allan Wagner, Minister of Culture for Peru Alejandro Neyra and Mayor of the Provincial Municipality of Cusco Victor Boluarte. “The return of the Echenique Disc on the occasion of commemorating our bicentennial of national independence constitutes a cause of deep joy for all Peruvians,” said Wagner.

The Echenique Disc has been featured in three of the museum’s exhibitions. The last of these was “The Great Inka Road: Engineering an Empire,” which was at NMAI in Washington, D.C., from 2015 until it recently closed in June 2021.