My remembrances of Jim Block are both personal and institutional: they are important to me and to the National Museum of the American Indian. In reflecting on my time as the founding director of that Native place on the National Mall in Washington, D.C, I tend to focus on “those who were there first,” and Jim, as he was known to his colleagues and friends, and his wife, Barbara, were at the head of the line. 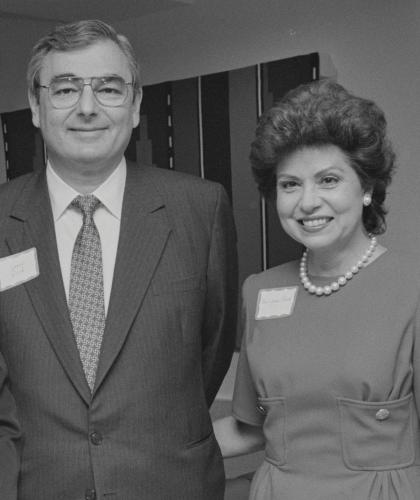 It was not necessarily an easy place to stand. The NMAI was a start-up in 1990—and a very unusual one at that. From the beginning, it has been a “museum different.” Yet aboard Jim and Barbara came in 1990, enthusiastic and knowledgeable. As proud citizens of New York, both were deeply informed about arts and culture institutions.

The Blocks were the first major donors in support of this nascent enterprise called the National Museum of the American Indian. I remember as though it were yesterday my first meeting with them as well as other NMAI and Smithsonian colleagues in New York. It was an evening full of their grace and graciousness at their Manhattan home as we first toured their significant collections of Native art and cultural materials. The conversation then centered primarily on the daunting ambitions of the museum. I always believed that their astute questions were probably much better than my answers as a novice director of the institution. But they were clearly “in” and ready for the journey, however arduous and complicated. The rest is history.

From these beginnings, I want to turn specifically to Jim, who within the past year has left us. His passing in May 2020 was an event of great sadness to all of us who knew him up close. As he was a dear friend and colleague, I am honored to memorialize him here.

His contributions of time and support to numerous arts and culture institutions were legion, including to the Smithsonian and the NMAI. He was a charter member of the museum’s first board of trustees and served along with Barbara on the board of directors of NMAI’s New York City location, the George Gustav Heye Center.

They contributed the first major individual gift to the construction fund for the museum on the National Mall. Jim was the initiator and charter donor of the W. Richard West Endowment Fund at the NMAI. In recognition of his contributions not only to the NMAI but to the Smithsonian Institution as a whole, he received the James Smithson Society’s Founders Medal.

But Jim, as a member of the charter board of trustees, also was present at the beginnings of the NMAI’s challenging and sometimes tortuous efforts to build an institution with the capacity to be significant, substantial and able to endure for the long haul. That playing field was complicated to say the least. It began with capital projects in three different locations—New York City, then Washington, D.C., followed by the Cultural Resources Center in Suitland, Maryland. Together, they had an expense tab of hundreds of millions of dollars and a fundraising goal of tens of millions. Fundamental policies relating to finances, collections, exhibitions, publications and research to establish the framework for designing and implementing programs had to be discussed and made final. Some of this work required new thinking—the federal repatriation legislation had been enacted by the U.S. Congress, for example, at the same time the NMAI itself was authorized.

These circumstances are precisely why I remember Jim Block with such fondness and respect: he had all the skills to make a new director far less fearful and anxious about surviving to the next day of his tenure. For starters, his career as a longtime corporate board member and executive provided a grounding that had everything to do with building an institution. But he was also thoroughly familiar with these tasks in nonprofit arts and culture institutions. He could recognize with sophistication the similarities and the distinctions between the cultural and the business sector and was able to communicate clearly about this subject. He had much more experience than I had then or now in raising private donations before he became centrally involved in the NMAI’s considerable campaign to raise private money for its museum on the National Mall.

I have seen that truly great leaders live every bit as much or more so by the intangibles they have in their skill set. The attributes that Jim brought to bear on the exciting but often challenging times in the NMAI’s early history, are what make him most memorable to me.

He came to the NMAI board table with a 24-karat mind, which was evident early in his life as a student at Dartmouth College. He had an intellectual acumen, power to understand and perceive, and a strategic sensibility that were enriched by qualities so valuable to young and developing institutions. He was often not the first to speak, but when he chose to do so, often after listening to others, everybody listened. He had capacity for human empathy that engendered trust, hopefulness and optimism that tallied up to a presence that was commanding.

My journey as the director of the National Museum of the American Indian was blessed by the support and wisdom of many, and I am grateful for all of them. But in that personal pantheon of mine, none will ever stand taller than my friend, trustee and mentor Jim Block.