It's Just Between Us 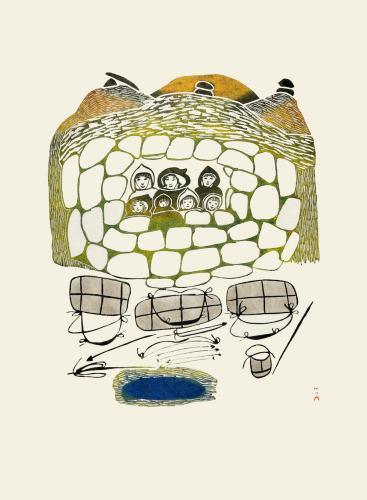 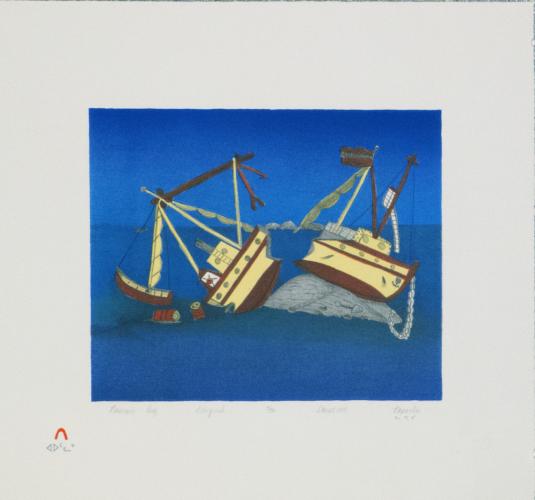 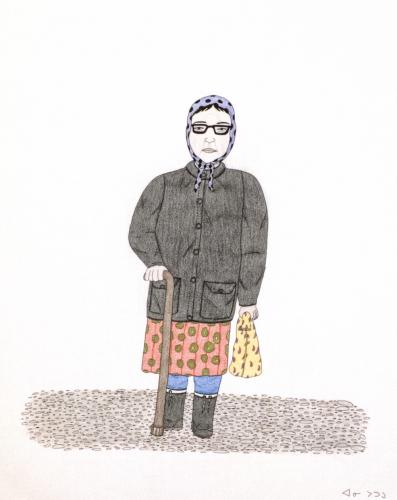 These women are a grandmother, Pitseolak Ashoona (1904–83), her daughter Napachie Pootoogook (1938–2002) and her granddaughter Annie Pootoogook (1969–2016), of Cape Dorset, Nunavut, Canada. The three artists are the subject of Akunnittinni: A Kinngait Family Portrait, an exhibition of their prints and drawings, originally organized by the IAIA Museum of Contemporary Native Arts (MoCNA) in Santa Fe, N.M., and currently on view at the Smithsonian’s National Museum of the American Indian in New York. This collection of 18 works strikes what curator Andrea Hanley (Navajo), MoCNA membership and program manager, calls a “visual conversation” between the family members.

“We really wanted to get a broad range of what it is to be a contemporary indigenous woman, and for me, I really feel this exhibition is contemporary indigenous feminist discourse at its truest and finest,” says Hanley. “You get a sense of what it is – the struggle, the resilience and the strength of these women. Most importantly, you can see the family and the connections between these people and this family voice coming through this tribal context.”

The idea for the exhibition formed when Hanley took a business trip to New York City with Patsy Phillips (Cherokee), MoCNA director. There they met with Hanley’s longtime friend, retired teacher and Native art collector Edward Guarino, to look at his vast collection of works by Inuit artists. Guarino has collected Native art for nearly 40 years and began to focus specifically on Inuit art around 20 years ago when he first chanced on the art of Janet Kigusiuq, an artist from the area of Baker Lake, Canada. She amazed him, he says, with her use of the Inuktitat language, multiple perspectives and the sense of life and movement she created.

“I have more works by Janet Kigusiuq than any other [Inuit] artist, but over the years I sort of flipped and am more interested in works from Cape Dorset nowadays,” says Guarino.

As Hanley and Phillips continued to look through Guarino’s collection (much of which was stored in archival boxes under his bed, in true New York apartment fashion), it became clear they wanted to do a show that concentrated on Pitseolak Ashoona, Napachie Pootoogook and Annie Pootoogook. Even before seeing Guarino’s collection, Hanley had particularly admired Annie’s work. Eventually they chose six works each for Napachie and Annie. But for Pitseolak Ashoona, they reached out to Will Huffman, marketing manager at Dorset Fine Arts in Toronto, Canada, the marketing division of West Baffin Eskimo Co-operative. Located in Cape Dorset, the co-operative is unique among the Arctic cooperatives for its focus on the arts and artists of its community.

“The bulk of what we do is promotion, distribution and advocacy around this work, but behind the scenes we have works-on-paper specialists and access to historians who deal with [Inuit content] in a scholarly way, in a curatorial way,” says Huffman. “So when Andrea called us to talk about what she was interested in doing, basically we had the ability to take that curatorial premise and work with our professionals to see how we could best complement and bookend the Annie and Napachie works.”

Guarino is quick to credit Dorset Fine Arts and the West Baffin Co-operative for keeping the practice of Inuit art strong.

Once the 18 works in total were chosen, Hanley searched for an Inuktitut word that connected them together. Akunnittinni, which translates in English loosely to “between us,” was the most accurate representation of how she felt the works communicated with each other. Each artist’s set offers very different messages about Inuk life and culture.

“Pitseolak’s work is more romanticized; it tells the story of how life used to be in a creative, positive light,” says Phillips. “Napachie’s is of the past, but concentrates on the darker side [of the culture], and Annie’s is more current to how life is today. That’s how I see the dialogue between the three, and also I think it’s generational. You know when [Pitseolak] was alive, it was at a time when you didn’t really speak about the bad side of your culture, and the next generation was able to [more freely].”

In Akunnittinni, the unbridled romanticism of Pitseolak Ashoona, who had 17 children, is illustrated primarily through images of family and motherhood in works such as Family Camping in Tuniq Ruins or whimsical remembrances such as Games of My Youth. The matriarch centered on optimism and positivity in her work, a practice which began mid-life for her in the 1960s, with the encouragement and support of the West Baffin Co-op. A prolific artist, her overall oeuvre includes some 9,000 works.

Napachie Pootoogook’s exploration of Inuit culture takes a very different turn and is markedly noticeable among the works in Akunnittinni. In particular, past subjugation of women is brought to the forefront in works such as Whaler’s Exchange, Trading Women for Supplies and Male Dominance. One work even examines the devastating effects of historical famine in Inuit communities. In Eating His Mother’s Remains, a man resorts to cannibalism in the throes of extreme hunger.

“What attracted me to [Napachie’s] works is that the artist was doing something that basically no other Inuit artist was doing and to a large extent many indigenous artists don’t do,” says Guarino. “She was presenting aspects of her culture that [many] would prefer not to be out there in the world, but she felt it was important. Napachie wanted to present the darker aspects and felt they needed to be recorded, such as the treatment of women, and her drawings portrayed these things graphically.”

Huffman adds, “I think this is a cathartic way of dealing with some of the very dark moments that have been part of Inuit history. But also this really does speak to the idea of ‘what does that white, southern colonial intervention look like?’, and as far as I’m concerned, it plays itself out in Napachie’s work more than anybody’s.”

Annie Pootoogook’s work is often also known for not shying away from controversial topics. Though not showcased in this exhibition, her works have approached serious issues such as alcoholism and domestic violence. Her modern emphasis also marks a departure in much of the traditional Inuit body of work. In Akunnittinni, her works underscore day-to-day contemporary Inuit life. The heartfelt scenes of Couple Sleeping and Drinking Tea are powerful in their exquisite embrace of the ordinary, but perhaps most endearing of her works in the show are A Portrait of Pitseolak and Pitseolak’s Glasses.

“I’m so delighted these are being exhibited together,” says Guarino. “They’ve been exhibited separately, but not together. … Pitseolak was known for her iconic black-rimmed glasses. On the one hand, you have a figurative representation of her grandmother, but then there is a print of just the grandmother’s glasses on the other hand. It’s a still life, but also a symbolic portrait. Those are the things that fascinated me.”

According to Huffman, exhibitions such as Akunnittinni serve a much-needed function within the broader art discourse.

“An important part of [Dorset Fine Art’s] mandate is to promote actively curatorial and scholarly investigation, so we are able to situate this work the same way the rest of art history functions,” he says. “You can read lots of books about lots and lots of movements and their context in the contemporary art world, but we need to do more of that in terms of the Inuit art perspective.”

Akunnittinni: A Kinngait Family Portrait runs through Jan. 8, 2018, at the National Museum of the American Indian’s George Gustav Heye Center in New York.

Joshua Voda is the public affairs specialist for the National Museum of the American Indian in New York.