An unfortunate encounter once put the Caribbean folk hero Deminan Caracaracol in a sorry state. His condition, and its surprising outcome, appears to provide the story for this beautiful bottle, now on display at the National Museum of the American Indian in New York. 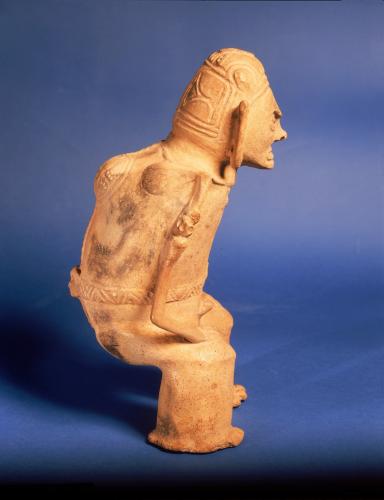 Deminan Caracaracol, a mythical hero or zemi of the ancient Indigenous Caribbean, was one of the quadruplet children of Itiba Cahubaba. Their travels brought many misadventures such as the painful gestation of a turtle on Deminan’s back in this fine thin-walled ceramic. The vessel was probably used in important ceremonies. Deminan Caracarcol bottle, A.D. 1200-1500. Andres, Dominican Republic. Clay: 8.7" x 8.7" x 16.1". Collected by Theodore de Booy, circa 1916, for the Museum of the American Indian. 5/3753. Photography by Walter Larrimore, NMAI.

Deminan Caracaracol, a mythical hero or zemi of the ancient Indigenous Caribbean, was one of the quadruplet children of Itiba Cahubaba. Their travels brought many misadventures such as the painful gestation of a turtle on Deminan’s back in this fine thin-walled ceramic. The vessel was probably used in important ceremonies. Deminan Caracarcol bottle, A.D. 1200-1500. Andres, Dominican Republic. Clay: 8.7" x 8.7" x 16.1". Collected by Theodore de Booy, circa 1916, for the Museum of the American Indian. 5/3753. Photography by Walter Larrimore, NMAI. 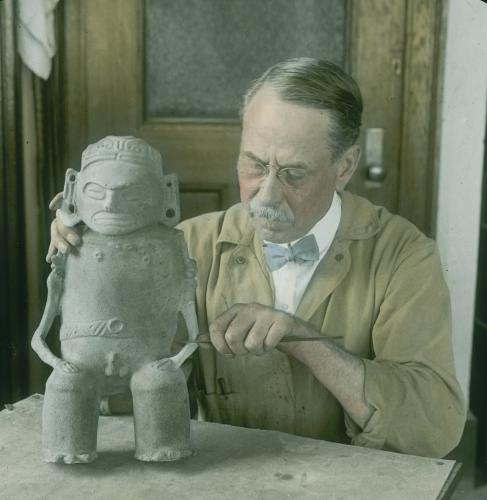 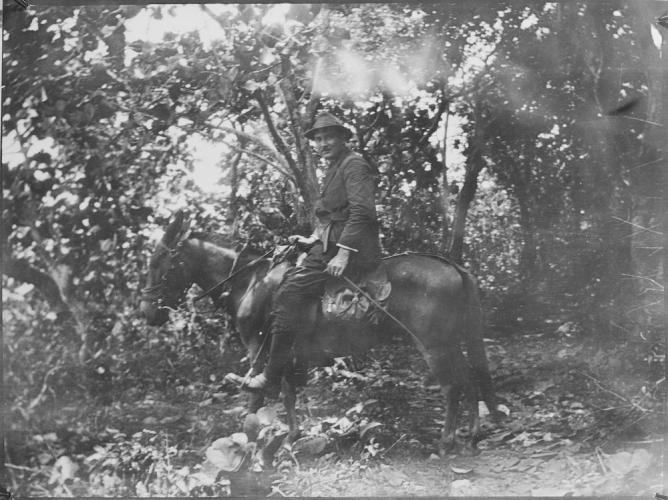 This sophisticated ancient Caribbean artwork was collected in the Dominican Republic by Theodoor de Booy in 1916. It shows the high artistic skills of the artisans of the island of Hispaniola (present-day Haiti and Dominican Republic) and the central position religion had in their lives. The effigy represents a male figure wearing a highly decorated bonnet and belt, armbands and elaborate ear spools, all symbols that indicate his high status. The figure has both hands on his thighs, is standing in a semi-squatting position and has an erected penis, possibly indicating that he has inhaled cohoba (a hallucinogen consumed to achieve a state of spiritual transformation and to contact the supernatural). Significantly, the hump on his back resembles a turtle with frog-like legs.

This hump suggests that he is the mythical figure Deminan Caracaracol. It possibly refers to one of the adventures of the mythical quadruplets, Caracaracol and his three brothers, whose mother died giving birth to them. The adventures of the quadruplets are recounted in a cycle of stories, including the creation of the ocean from a great flood. The brothers obtained fish, cassava bread and cohoba from mythical beings to provide for humankind. They were the Prometheus of the Natives of the Greater Antilles.

This particular story was recorded by Fray Ramon Pane in 1495–96 on the island of Hispaniola. A friar of the Order of Saint Jerome, he arrived to the island in 1493 on Christopher Columbus’ second voyage. Columbus himself sent Pane to live in the village of cacique (chief) Guarionex to learn their language (Arawak), and “…to discover and understand of the beliefs and idolatries of the Indians, and of how they worship their gods....”

Pane recorded what happened when the four brothers tried to ask for food from another mythical figure, Bayamanaco.

“As soon as they reached Bayamanaco’s door, and they saw that he was carrying cazabe [cassava bread], the brothers said: ‘Ahiacabo guarocoel,’ which means: ‘Lets us meet this our grandfather.’ Likewise, seeing his brothers before him, Deminan Caracaracol went in to see if he could get some cassava bread, which is the kind of bread they eat in that country. Once inside Bayamanaco’s house, Caracaracol asked him for cazabe, the aforesaid bread. And the latter put his hand on his nose and spat a guanguayo [wad of spittle] onto his back; the guanguayo was full of cohoba that he had ordered prepared that day. This cohoba is a certain powder that they take at times to purge themselves and for other effects that will be described below. To take it, they use a reed half the length of an arm, and they put one end in the nose and the other in the powder; thus they inhale it through the nose, and this serves as a great purgative. And in this way he gave them the guanguayo instead of the bread he was making, and he went away very indignant that they had asked him for it…. After this, Caracaracol turned back to his brothers and told them what had happened to him with Bayamanaco, and how he spat guanguayo on his back, which ached very badly. Then his brothers looked at his back and saw it was very swollen; and that swelling grew so much that he was about to die. Then they tried to cut it, and they could not; and taking a stone axe, they opened it up, and a live, female turtle emerged; and so they built their house and raised the turtle. I did not find out any more about this, and what I have written down is of little help.”

Pane, according to his own statements, his writing style and some contemporary writers, did not seem to be as well educated as other chroniclers of his time. Nevertheless, his work, though short and simple, is of great importance at many levels. For example, he is the only European writer who cohabitated with the Natives from Hispaniola, learned their language and reported on their religion before the impact of colonization had a detrimental effect in their way of life. Hence his work is considered by many to be the first ethnographic treatise of the Americas.

The collector of this bottle, de Booy, was a Dutch archaeologist who worked in the Museum of the American Indian, the predecessor of our Museum, between 1912 and 1918. Unfortunately, we do not know much about the origin and discovery of this effigy bottle. According to the collection records, the bottle was found in the area of the town of Andres, south-central Dominican Republic. It is unclear whether de Booy actually discovered it or collected it from someone who found it in a cave. However, de Booy never mentioned this effigy bottle in any of his published reports on his work in Dominican Republic, suggesting that the latter explanation is the more plausible.

The object arrived to New York in 1916 in a relatively good state of conservation, but with its right arm and left earlobe missing. William C. Orchard, conservator of the museum, can be seen treating the object in archival photos. From them it is clear that the missing parts were reconstructed and added, possibly using plaster, and painting them over to match the color of the rest of the effigy. The added parts are observable in this old photo by their light or whitish tone compared to the orangey color of the rest of the vessel.

At the present, this amazing piece can be appreciated at the Caribbean section of the exhibit Infinity of Nations at the Museum’s George Gustav Heye Center in New York City.

All quotations are from Fray Ramon Pane, An Account of the Antiquities of the Indians: A New Edition, with an Introductory Study, Note, & Appendixes by Jose Juan Arrom. (Durham, N.C.: Duke University Press, 1999.)

L. Antonio Curet is an archaeologist who specializes in Caribbean and Mesoamerican ancient history. He is currently the Curator of Archaeology at the National Museum of the American Indian.