The Guarani Altar: A Donation Tells a Deep Story

The altar looks simple. A wooden “box” is surmounted by a “rack,” from which hang several ceremonial objects. But the sacred installation, constructed specially as a donation to the National Museum of the American Indian, comes with multiple dimensions of meaning, involving many actors. 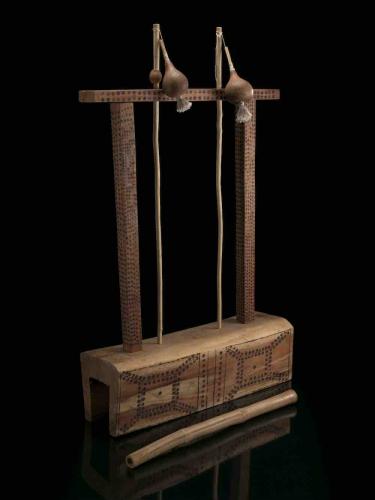 Mba’e Marangatu. Pai Tavytera wooden altar. Comprised of a rectangular base with two vertical supports and one cross bar at the top. The four wooden structural supports of the base are marked with black dots burned into the wood. Ceremonial Mbaraka, maracas made of gourds, hang from the crosspiece. Don Leonido Benitez Romero (Pai Tevytera) and Na Silvia Arce (Pai Tavytera), carver and maker. Amambay Hills, Paraguay. 2013. (26/9699). Photo by Ernest Amoroso

Mba’e Marangatu. Pai Tavytera wooden altar. Comprised of a rectangular base with two vertical supports and one cross bar at the top. The four wooden structural supports of the base are marked with black dots burned into the wood. Ceremonial Mbaraka, maracas made of gourds, hang from the crosspiece. Don Leonido Benitez Romero (Pai Tevytera) and Na Silvia Arce (Pai Tavytera), carver and maker. Amambay Hills, Paraguay. 2013. (26/9699). Photo by Ernest Amoroso 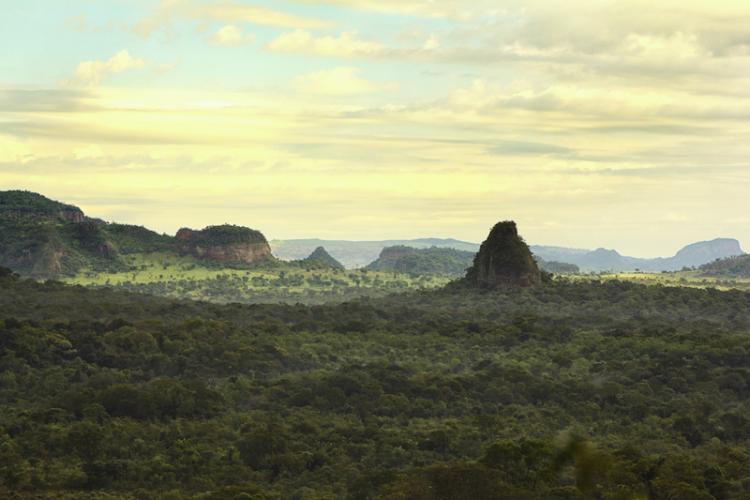 The altar evokes the struggle of a Guarani Indian group from Paraguay, the Pai Tavytera, for recognition and survival in a national environment that tends to ignore their rights. This group is part of an indigenous movement demanding respect for sacred sites such as the Amambay Hills near the border of Paraguay and Brazil, where the Pai Tavytera mostly reside. This movement is rallying for a more sustainable and ecologically friendly use of resources but it faces a government biased in favor of powerful economic and political interests. More broadly, indigenous groups are leading a cultural and religious revival movement. They seek to protect basic aspects of their lifeways and ethos against the harmful effects of hired-labor and western influence.

The Pai belong to a larger ethnic group named Nande Pai Tavytera. The name Pai Tavytera comes from two sources, Pai, which is the way the gods refer to them, and Tavytera which means “the inhabitants of the center of the earth.” The wood altar is considered a sacred sanctuary and a focus of the community. Called the Mba’e Marangatu (meaning sacred, privileged object in Guarani), it is the central institution of the Pai Tavytera’s religious system. Lacking the sacrificial function that most altars have, the Mba’e Marangatu is more of a sacred “place” to keep the instruments and objects used in ceremonies. These objects are sometimes called santos (“saints” in Spanish). It represents what anthropologists call the axis mundi, a point in space where the natural and supernatural worlds intersect or are connected. As the best location to conduct ceremonies, it is also the focal social point of the community. The altar is a place where the community gathers to worship or to discuss important matters.

The Museum of Donation

An effort to preserve this community led to an offer in 2014 to donate a Pai Tavytera altar to the National Museum of the American Indian. The initiative came from the Solar Map Project (SolarMapProject.com), founded and led by Frank Weaver, a Paraguayan filmmaker residing in the U.S., with his brother, James. This project is producing a documentary about ancient rock art located in the Amambay Hills and the rich culture of its guardians, the Pai Tavytera Indians. The tribe is besieged by modern development. The Amambay Hills area has a long history of encounters between the natives and national political and economic interests. A great majority of these cases have ended to the detriment of the environment and the Guaranis. Today, the region is heavily deforested. Cattle ranching and soybean farms have forced the Pai Tavytera to abandon some of their traditional subsistence strategies and look for other ways of life.

The desire to have a permanent record of Pai Tavytera survival in the Museum inspired the idea of commissioning a new altar. The native community of Ita Guazu agreed through their leaders.

Stella I. Gonzalez de Olmo, a researcher of the rock art, commented on the significance of this donation:

“This altar conserves the value of a tangible and intangible heritage that, in a certain way, represents the culture of the Pai Tavytera; the message it conveys is also a contribution to the whole world. The donation of the altar to this Museum will allow the world to value this heritage and to give it its true meaning. It will facilitate the understanding and appreciation of these ancestral places [the Amambay Hills and the rock art] so rich in intangible heritage and will foment the public awareness and the commitment for their protection and conservation.

“This way of presenting the Pai culture is by its own nature a communicative act. It will increase public awareness and will allow peoples from very different regions to learn more about Paraguay, which to date does not have a program to protect and value the culture of the Pai.”

The altar was carved by the spiritual leaders Don Leonido Benitez Romero and his wife Na Silvia Arce. Don Leonido is a wood craftsman, inspired by wild animals from the jungles of Amambay, such as owls, armadillos, fish and birds. He also creates ceremonial objects, many of them with designs inspired by the ancient rock art in the hills. Don Leonido is one of the last Pai Tavytera Indians to make altars.

The altar itself is composed of two vertical lines (made of wood) crossing the horizontal line from which objects can be hung. These lines connect the altar with the sacred hill of Yasukarenda where creation began. Yasukarenda, also known as Guazu Hill, is the largest hill in the region. The Pai Tavytera consider it the navel, meaning the center of the world. The altar is considered not only to represent this sacred hill, but actually to be part of it, where the beginning of the cosmos is located, and where their main god, Name Ramoi Papa, resides.

In an interview in Guarani, Don Leonido explains, “It was there that the Pai Tavytera was born, and then the law of day-by-day living on the earth emerged and we still follow it today. Then we see how people are not using the customs and teachings, because they abandoned the prayers; they are punished by nature.”

The Pai Tavytera have so many reasons for rituals that they carry out one almost every day, normally at sunset. The main ceremony is jeroky nembo, a sacred communal ritual directed by the shaman in which the whole community participates. The ritual includes use of the ceremonial objects, singing of prayers and dancing. Singing provides the group with spiritual and corporal energy and helps them maintain communication with the divine. While full of religious significance, this celebration also conserves and transmits cultural and social memory from one generation to another. It is through these rituals that the Pai Tavytera fulfill their duties as guardians of the center of the world.

Although the Mba’e Marangatus can include many of the objects used in ceremonies, from feathered headdresses and bracelets, to ceremonial instruments, Don Leonido’s donated altar included only some of the sacred items:

1. Mbaraka: maracas made of gourds adorned with toucan feathers and cotton. Each man owns one which is named through divination, and they are required to participate in ceremonies. The maracas are kept in the Mba’e Marangatu hanging from the yvyra’i or ritual rods. “The mbaraka is to be used by people to pray and the yvyra’i, too,” says Don Leonido.

2. Yvyra’i: thin rods or batons that are distributed to all male participants and are held in their left hand during ceremonies.

The altars also usually include a mimby, a wooden flute used by men in the ceremonies. “The mimby,” says Don Leonido, “is to start the prayer. When it is blown, people know that the prayer will begin.”

As Don Leonido explains, referring to the altar by an alternate name, “The Yvyra Marangatu needs to be accompanied by yvyra’i, mimby, takuapu; everything needs to be ready in order to bless the people when they arrive.”

The ceremonies tend to begin early in the night. They are led by the shamans, who are the mediators between the people and the gods. To contact the supernatural, the shaman begins, and is joined by the community, by singing, men rattling the mbaraka and women hitting the ground rhythmically with their takuapu. The shaman uses the communal singing-dancing-prayer combination as the instrument to contact their gods. The participation of the community assists him in reaching the divine.

Don Leonido explains why the Pai Tavytera wished to donate a piece of such cultural and religious significance:

“I know many people don’t know how we really live and taking this altar to the Museum we can show them our culture. That they know about our existence is of utmost importance to us.

The interview with Leonido Benitez Romero was conducted in Guarani by Osmar Valenzuela, the first Pai Tavytera to attend college. It was translated into Spanish by Rita Carolina, and into English by the authors of this article.

Frank Weaver is a native Paraguayan filmmaker who resides in Florida. His project, the Solar Map Project on the rock art of the Amambay Hills, has led him to live and document the culture of the Pai Tavytera for several years.

L. Antonio Curet is an archaeologist who specializes in Caribbean and Mesoamerican ancient history. He is currently the Curator of Archaeology at the National Museum of the American Indian.