But she accepted a position on the board of the Royal Winnipeg Ballet (RWB) to help give indigenous direction to its project to develop a new Native-themed ballet. 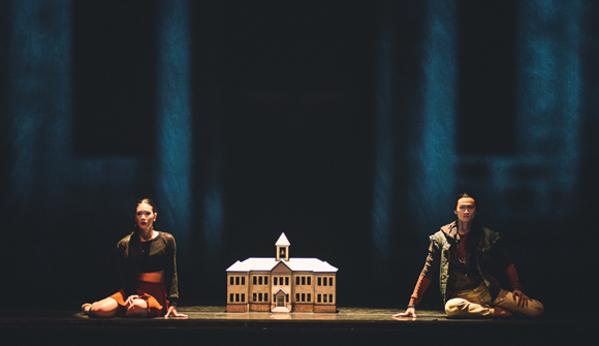 Sophia Lee and Liang Xing in a scene from Going Home Star - Truth and Reconciliation, a new ballet from Royal Winnipeg Ballet about the First Nations trauma of the compulsory residential boarding schools. Photo by Samanta Katz

Sophia Lee and Liang Xing in a scene from Going Home Star - Truth and Reconciliation, a new ballet from Royal Winnipeg Ballet about the First Nations trauma of the compulsory residential boarding schools. Photo by Samanta Katz 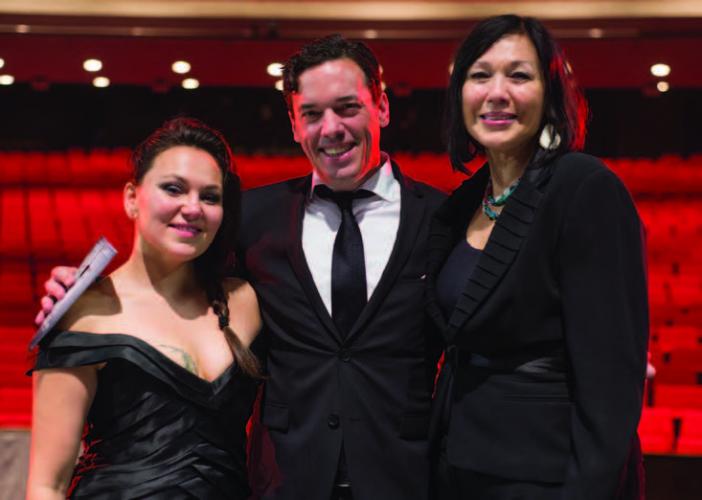 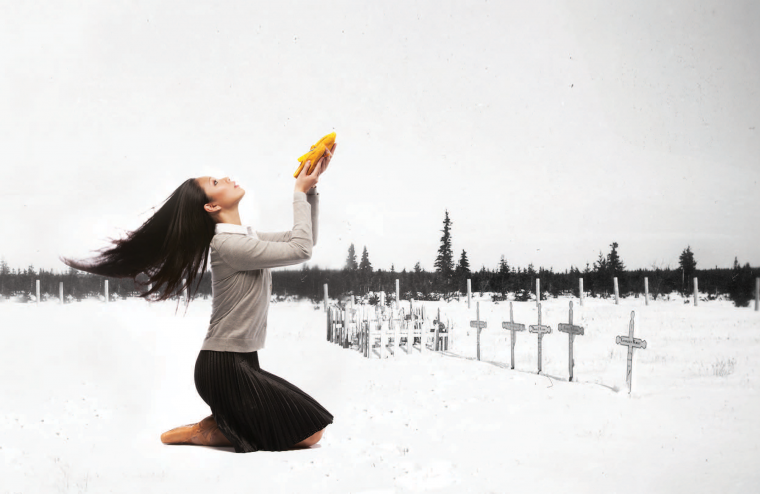 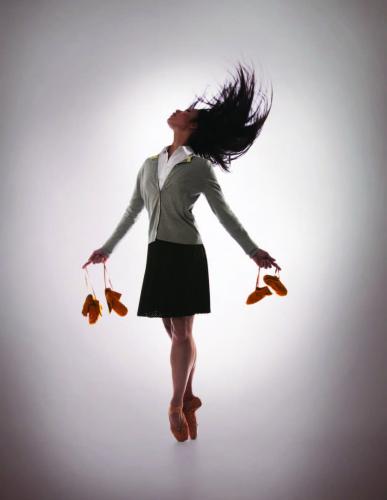 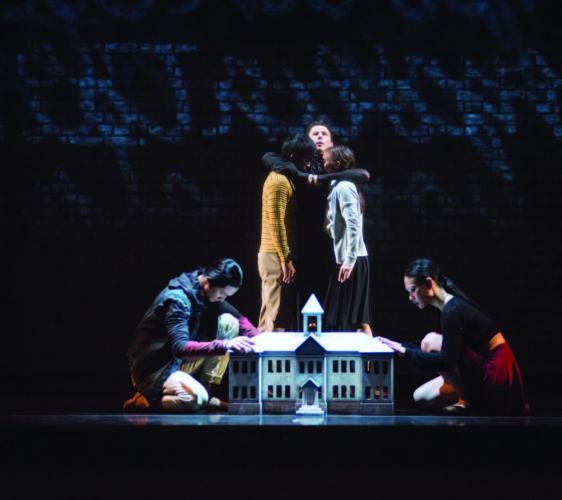 Scene from Going Home Star - Truth and Reconciliation, a new ballet from Royal Winnipeg Ballet about the First Nations trauma of the compulsory residential boarding schools. Photo by Samanta Katz

Scene from Going Home Star - Truth and Reconciliation, a new ballet from Royal Winnipeg Ballet about the First Nations trauma of the compulsory residential boarding schools. Photo by Samanta Katz

The RWB, based in Manitoba, was already famous for a work on contemporary Indigenous life, The Ecstasy of Rita Joe, a gritty depiction of the destruction of a Native girl in the big city. The company turned to the work of Canada’s Truth and Reconciliation Commission for a theme just as harrowing, the destruction of Indigenous culture in the boarding school system.

“We were able to get collaborators, dancers, elders and staff to feel like they were participating in something beyond the dance,” says Keeper (Norway House Cree Nation), a film producer and former award-winning actress in the Canadian television series North of 60.

The result was the new ballet Going Home Star: Truth and Reconciliation. It premiered in October 2014 in a five-night sold-out run in Winnipeg, to commemorate the 75th anniversary of the RWB, one of the oldest ballet companies in North America. Plans are underway for a national Canadian tour in 2016 and the performance of excerpts in Washington, D.C., this December.

One thing was clear for Keeper, a member of the Canadian House of Commons in 2006 as Liberal representative from the riding of Churchill, and the Opposition Critic for Public Health and Canadian Heritage: Indigenous artists must steer the project direction.

In 2009, Keeper met RWB leaders Andre Lewis, artistic director, and Jeff Herd, executive director, to discuss how to envision a Native-themed ballet. She joined the RWB board and a programming committee where she became acquainted with Stephanie Ballard, a contemporary dance school director, in Winnipeg where she lives.

Early on, Keeper met with author Joseph Boyden (Anishinaabe) who lives in New Orleans, La. “Joseph, would you be willing to help us create a ballet?” she asked. He hesitated because he had no idea how to write a ballet.

“It became an opportunity to cross boundaries, to reclaim what is often considered a colonial art form,” Boyden recalls.

“The heart of the Indigenous world is dance and music and story, so let’s do this,” he says. “Let’s create something that is often thought of as very Western but turn it on its head. Re-imagine the paradigm and make it into something Indigenous.”

He locked himself in a Toronto hotel room for two days during a book tour in Canada and wrote the story.

For Keeper it was difficult to share and trust non-Native individuals to honor the heartache of Indigenous history, but the planning meetings began a reconciliation between RWB and Indigenous artists. “We were the ones that felt we had something on the line and it was really painful, but we had each other,” she says.

Keeper weeps when she tells a story residential school survivors told over and over again to Godden. The children’s visualization of going home could never be broken.

“They could never forget home. I think that’s the part that really got to me – they were pulled away from everything. It’s that part that Canada doesn’t realize. The devastation you see is not who we are. Who we are, are beautiful strong people, that would never have given our children up,” says Keeper.

The choreography for the main priest character was cutting and harsh.

“When he did his solos you could feel it. My mum used to always say, ‘You have to find pity in your heart for them because something happened to them, too.’ People couldn’t do those things to other people if it didn’t happen to them. I’m always reminded of that kind of compassion and values that were so wise from our people.”

While she watched the dance, Keeper felt “as horrendous as everything was, our culture, our resilience is stronger than that.”

The RWB team supported the Indigenous perspective through to the end. “That’s why it worked – because they were willing,” says Keeper. She says that if the attitude had been, “we can only take it so far and then they are going to take over, it would have never worked.”

The Indigenous artists were decision-makers, says Herd. Unlike classical stories such as Romeo and Juliet, he says, “This one people had to create. They had to create the characters. They had to get some understanding of what these characters were feeling, what were they thinking. This is a different kind of approach. It’s more intense. You have to not just understand but you have to feel it. Going through the process is a learning experience for those of us who are not dancers.”

The experience, he says, had a deep impact on his company. He and his artistic director Lewis attended sessions of the Truth and Reconciliation Commission. “I think it changed us on many levels,” he says.

In developing the story, Boyden returned to characters he’d spent many years creating in his novel, Through Black Spruce, published in 2008. He wanted to see what would happen to them in a different context.

“Let me try to recreate them in a world where dance is involved, where music is involved rather than the contemporary reality,” he says. “Wouldn’t that be interesting? Wouldn’t that be fascinating to take characters from my novel and put them in a new place against new odds facing new challenges together?”

Boyden wants the ballet to last.

“What I want this ballet to do is introduce Canadian, American and European audiences, to an aspect of Canadian history that is dark and disturbing in terms of what was done to Native people of this country,” he says. “I didn’t want as a writer or creator of something to hit the audience over the head with a hammer of righteousness. I want to approach it and say, ‘This could be you, your daughter, your friend.’”

Audiences were moved beyond emotion and perhaps to a bit of understanding about the traumatic experience of residential schools for Indigenous peoples.

“There was this wonderful incident one of the elders told me about. At intermission, an elderly non-Indigenous person came up to him with tears running down her face saying, ‘I’m sorry. I’m sorry.’ His response was, ‘It’s not about being sorry. It’s about understanding how we move forward together,’” says Herd.

Lewis’s commitment to the ballet came from meeting an elder, the late Mary Richard (Metis), in Winnipeg.

“Everybody knew her. Mary used to go to the ballet and say to Andre, ‘I would really like to talk to you.’ She made a meeting with him and told him, ‘You need to create something new – a Native-themed creation.’ She was the one who inspired him. This ballet is a dedication to the late elder, Mary Richard,” says Keeper.