Growing one’s own food became more appealing and, in some cases, a greater necessity to many in this pandemic era. Native peoples have long tended gardens that have provided their communities with sustainably grown foods, medicinal plants and natural materials. Today these much-needed sources of local, healthy foods are also places to cultivate and preserve cultural traditions. 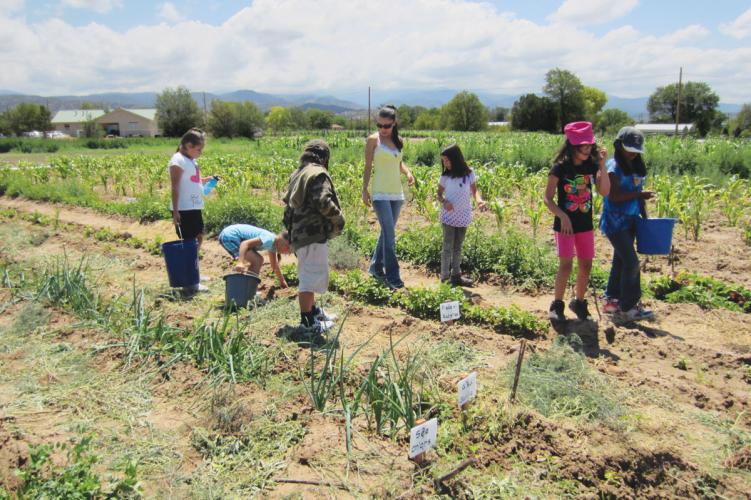 Pueblo of Nambe Community Farm in New Mexico serves as a teaching ground for traditional growing methods and language.

Courtesy of Nambe Department of Environment and Natural Resources

Pueblo of Nambe Community Farm in New Mexico serves as a teaching ground for traditional growing methods and language.

Courtesy of Nambe Department of Environment and Natural Resources 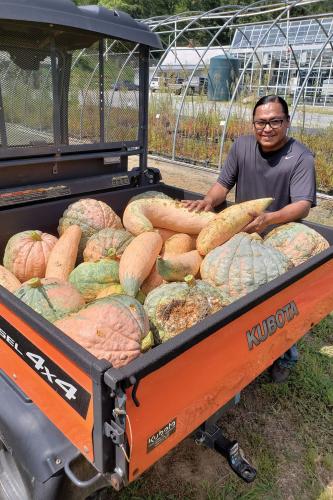 The Eastern Band of Cherokee Indians’s greenhouse complex in North Carolina enables community members to grow traditional foods such as these squash.

The Eastern Band of Cherokee Indians’s greenhouse complex in North Carolina enables community members to grow traditional foods such as these squash.

“Even some Native cultures—like foraging cultures—that didn’t historically garden now see it as a helpful use of land and time and money because they can efficiently produce the kinds of foods that people need to stay healthy,” said Elizabeth Hoover. Of Mohawk and Mi’kmaq descent, she is an associate professor of Environmental Science, Policy and Management at the University of California in Berkeley. Researching this trend, she drove 20,000 miles in 2014 to talk with dozens of American Indian gardeners and food advocates.

In western North Carolina, David Anderson works as the horticultural operations supervisor at the Jessie Owle Dugan Native Plant and Greenhouse Facility of the Eastern Band of Cherokee Indians. The complex includes three greenhouses, 30 raised growing beds, a 3-acre nursery and 5 acres of fields dedicated to producing crops specifically for their seeds. It also has 330 acres of field that can be leased to enrolled tribal members who wish to garden or farm.

While the facility does generate funds for the tribe, it also preserves culturally important species to get them into the hands of tribal members to plant. It focuses on growing traditional plants, such as grapes, elderberry, wild strawberries, blackberries, huckleberries sochan and cohosh. In 2021, the greenhouse also grew hickory saplings, which once mature, can to provide wood that can be used to make stickball sticks, artworks and other traditional projects. “We serve our community with plants for home, for farmers, and for restoration,” said Anderson.

The operation shares equipment, land and greenhouse space with tribal members so they can grow, and occasionally sell, their own foods. One tribal member, for example, grows a quarter of an acre of peppers for his hot sauce business. Another feels a duty to produce corn to be ground into flour just to provide a traditional food for tribal members. In fact, a 2018 survey found that 80 percent of tribal members said that they just wanted to raise plants for themselves or to give away to their neighbors, not to make money.

With the help of the North Carolina State University Cooperative Extension Office, the greenhouse is aiming to perpetuate a selection of seeds to ensure genetic diversity among culturally vital plants and encourage their propagation. The heirloom seeds planted and distributed to tribal members each year are a source of renewed continuity for both plants and the people who grow them.

This approach is part of a broader movement to save Indigenous agriculture heritage. Melissa K. Nelson, a member of the Turtle Mountain Band of the Chippewa Tribe and a professor of Indigenous Sustainability in the School of Sustainability at Arizona State University, explains these efforts have led to the “rematriation” of seeds, a return to the “mothering embrace of the Earth” and of the women who largely cared for the crops they yielded. The division of labor between men and women in the garden varies from tribe to tribe, but historically women have led in the contemporary preservation of seeds for future generations.

Yet seeds are more than seeds. “Seeds [are] responsive beings that are inherently embedded within ecological and spiritual webs of kinship,” not just “active storage containers of genetic material,” wrote Hoover after her 2014 journey. They are seen “both as children that need nurturing and protecting, and as grandparents who contain cultural wisdom that needs guarding.”

The farm has 3 acres of crops and nearly 8 acres of vineyard. Beyond, a dozen bison roam across 200 acres of rangeland. “We grow salad greens, corn, chilis, melons and beans,” said George Toya (Jemez/Acoma Pueblo), the farm’s manager. “But none of it is for sale. It all goes to tribal members.”

Toya explained that growing traditions have been always passed down orally. Students and youth who now volunteer on the Pueblo farm learn from elders how to grow crops traditionally and pick up phrases in their Native language along the way. They also paint signs with both English and Native words to identify plants, farm implements and the weather. Given that many words convey meanings that can’t be easily translated, working in the garden reinforces language learning. said Toya, as “some words—like those for water, pumpkin or moon—sound the same but their meaning is only revealed by context.”

Gardens provide not only food but a deep connection to tribal culture and the Earth. The gardens nourish people just as people nurture their gardens. “Our values were defined by growing food or gathering wild foods,” said Toya. “Plants hold a special place in our lifestyle and our spirituality. They served both as food but also as prayer and healing. Health came not only from ingesting food but also through hard work and prayers.”

Aaron Levin is a freelance journalist based in Baltimore, Maryland, and a frequent contributor to American Indian magazine.