The Dreamscapes of Emily Johnson

The “quilt being,” a tall cylindrical figure who appears to be composed of tucked-in hand-made quilts, stands nearly motionless on a rock by a narrow road. Several dancers twist and stomp by an audience seated on more quilts across the way. This outdoor performance entitled “Being Future Being” that was held at the Jacob’s Pillow Dance Festival in Becket, Massachusetts, this past summer is the latest projection of the surreal, inspired and increasingly honored mind of Emily Johnson and her Catalyst dance company. 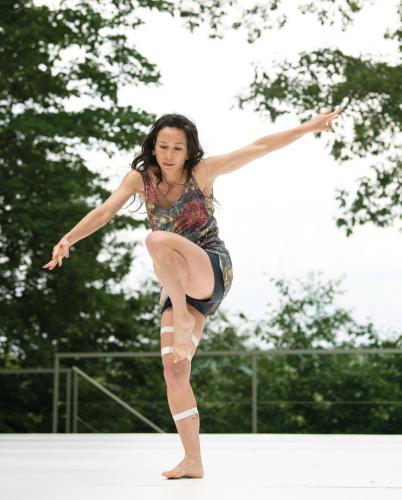 Emily Johnson performs at her Catalyst dance company’s presentation of “Being Future Being” at Jacob’s Pillow Dance Festival in 2021.

Emily Johnson performs at her Catalyst dance company’s presentation of “Being Future Being” at Jacob’s Pillow Dance Festival in 2021. 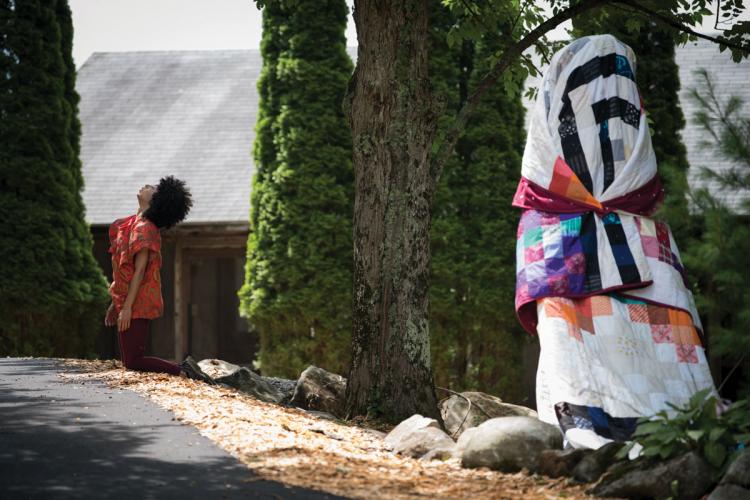 Stacy Lynn Smith with a “quilt being” designed by Korina Emmerich and embodied by Jasmin Shorty during an outdoor portion of the work “Being Future Being” on the Jacob’s Pillow grounds in 2021.

Stacy Lynn Smith with a “quilt being” designed by Korina Emmerich and embodied by Jasmin Shorty during an outdoor portion of the work “Being Future Being” on the Jacob’s Pillow grounds in 2021. 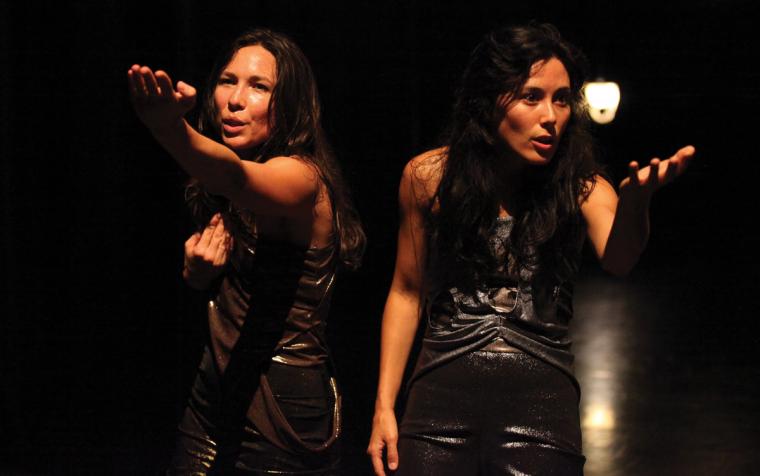 Emily Johnson and Aretha Aoki perform a monologue in unison in “Niicugni,” the second work in a trilogy exploring Johnson’s Yup’ik roots, at the Baryshnikov Arts Center in New York City in 2012.

Emily Johnson and Aretha Aoki perform a monologue in unison in “Niicugni,” the second work in a trilogy exploring Johnson’s Yup’ik roots, at the Baryshnikov Arts Center in New York City in 2012. 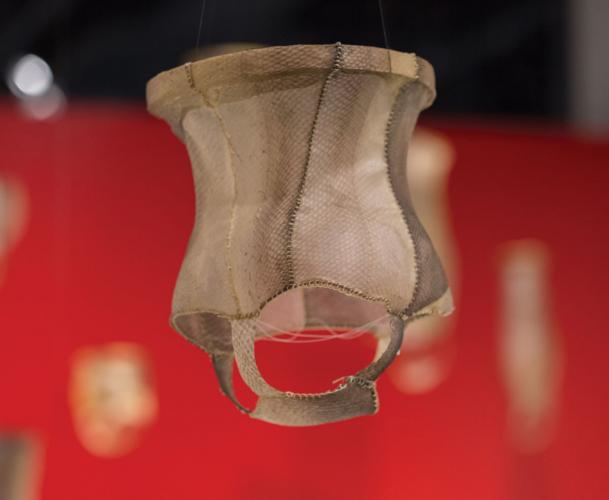 One of the fish-skin lanterns that were part of the “Niicugni” performance. It is now part of the “Thinking Making Living” installation at the Nash Gallery on Hilton Head Island in South Carolina.

One of the fish-skin lanterns that were part of the “Niicugni” performance. It is now part of the “Thinking Making Living” installation at the Nash Gallery on Hilton Head Island in South Carolina.

An Alaska Native belonging to the Yup’ik Nation, Johnson blends family stories, modern dance, electronic music and community participation into her own distinct vision. During the past two decades, her works have not simply broken the boundaries of the dance form; they have ignored them. In what could be called “metachoreography,” some of her earlier pieces combine videos with monologues. Some have also invited preselected members of the audience to flood the dance floor. The result, says the distinguished dance critic Deborah Jowitt, is “a domain in which dream and history and memory meet.”

This spell-weaving comes from down-to-earth roots. Growing up on Alaska’s rural Kenai Peninsula, Johnson did not have access to early training in ballet or dance as high art. Her great outlet was athletics, including a passion for basketball. When she received an academic scholarship for the University of Minnesota, she was delighted at the chance to leave her home community of about 3,800 people. “I just wanted to go far away,” she says.

At the university, she was awed by the big city of Minneapolis and explored it eagerly with her assigned roommate. They soon became close friends. She also made an accidental discovery that began her shift from her original career choice of physical therapy. One of her selected courses had no openings, and the substitute class that best fit into her schedule was in modern dance. She immediately took to its flexible, expressive vocabulary of movement. “One of the positions was like the defensive stance in basketball,” she says. “I could relate to that.”

Then her roommate suddenly died. Deeply shocked, Johnson shut down and thought about leaving school. After several weeks, however, she started going to her dance class again and found that its movements helped her cope with the loss. “I could watch the grief tendrils moving away from my body,” she says. She decided that dance would become her life’s work. “I had no other choice,” she says.

After graduating in 1998 with a degree in dance, Johnson stayed on in Minneapolis and founded her own dance company—now named Emily Johnson/Catalyst. The tightly knit group quickly made an impression with Johnson’s choreographed abstract, hard-bodied pieces that physically moved her audiences through unlikely settings, such as an abandoned soap factory.

When Johnson relocated to New York City seven years ago, she left her original group behind and now assembles her casts project by project. As Johnson expanded her works and toured them widely, her multilayered reworkings of reality made an impression on the dance world. She received New York City’s prestigious “Bessie,” the New York Dance and Performance Award for Outstanding Production, in 2012, and the Doris Duke Artist Award in 2014. This past winter, she was an artist in residence at the Jacob‘s Pillow Dance Festival, where she developed the work “Being Future Being” that she presented there this past summer.

The Bessie honored her piece “The Thank-you Bar,” named for a saloon in Alaska owned by her grandmother and grandfather. It was the first of a projected trilogy drawing on her Alaskan and Yup’ik roots, and the beginning of an ambitious effort at community involvement. She prepared for the second work in the series, “Niicugni,” with wholesale devotion to a traditional Native Alaskan craft, the sewing of containers from dried fish skins. After studying the craft with the Athabaskan artist Audrey Armstrong, Johnson organized workshops in the cities of the “Niicugni” tour to sew the dozens of fish-skin lanterns to be used for lighting and sound. The activity, she says, was “as important as the performance.”

The emphasis on community carried into the performance, when Johnson interrupted the dreamy ambiance created by the lamps to invite preselected members of the audience onto the dance floor. It recreated the spirit of a down-home dance, although one thoughtful critic remarked on the risk it posed of losing control of the presentation. (This risk was evident in the performance seen by this writer, when an enthusiastic four-year-old nearly stole the show.) But from the beginning of her career, Johnson has been praised, in the words of her Bessie citation, for “gently and deftly coaxing an audience into a community, holding them spellbound with stories spoken and unspoken.”

Quilting Bee to Quilt Being

A similar communal activity helped prepare for her next series of works, but this time the craft was quilting. Community volunteers sewed together blankets through a series of old-fashioned quilting bees, following designs by the textile artist Maggie Thompson (Fond du Lac Ojibwe). Each square included a hand-sewn message expressing the volunteer’s vision for the future. The quilts were meant for ground cover on which an outdoor audience could sit and enjoy storytelling and a bonfire during Johnson’s 16-hour, all-night-plus production entitled “Then a Cunning Voice and a Night We Spend Gazing at Stars.” (One of the qualities Johnson says she learned from her early athletic training was endurance.) The work premiered at Randall’s Island Park in New York City in 2017.

After two years and performances in Chicago and Wesleyan, Connecticut, Johnson was left with 84 community-made quilts. The textiles, already imbued with messages, morphed into the vision that became “Being Future Being,” Johnson’s presentation last summer at Jacob’s Pillow. “Our dances grow out of the preceding ones,” she notes. With the help of an elaborate framework and a very strong dancer, Jasmin Shorty (Diné), four of the quilts became a 7-foot-tall quilt being designed by Korinna Emmerich (Puyallup from Coast Salish territory). Accompanied by several smaller, more mobile quiltlings and the electronic score of Raven Chacon (Diné), the ensemble became an other-worldly presence, like visiting deities.

The vision reached back to Johnson’s first modern dance classes, when she says she could feel the relationships not only in the human world but of a multilayered reality. “It makes me think of the multiverse,” she says. “Many layers of many worlds are linked all the time. I try to tune in these many layers”

Johnson’s vision now has a new outlet. She and her rescue dog Spicer relocated from Minneapolis to New York City seven years ago. She is becoming a major presence in the landscape and Indigenous world of the Lower East Side. Along with Karyn Recollet (Cree), she has been cohosting a monthly ceremonial fire in association with the city’s Abrons Arts Center. She is devoting her energy as a land and water protector to trying to save the East River Park and its 1,000 trees from a controversial city plan to replace it with a flood berm. She is also helping to develop First Nations Performing Arts, a network focused on commissioning, touring and presenting Indigenous performance.

At the same time, she is looking back to the traditional Alaska crafts she featured in “Niicugni.” With the help of Audrey Armstrong and other culture keepers, she and Recollet are planning to learn how to tan and dye fish skins to make them more flexible. “We want to make a fish-skin quilt,” she says. How these creations will work into a new production remains to be seen, but there is little doubt that they will mark the portal to a richly layered expression of multiple realities.