Dreams of an Olympic medal kept Billy Mills going through hard times. And there were plenty of hard times on the Pine Ridge Reservation for the boy who became the greatest living American Indian Olympic medalist. 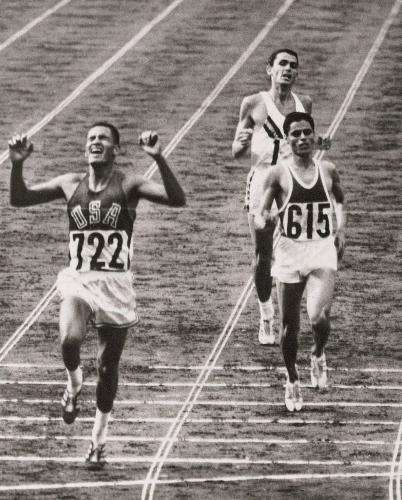 William Mervin Mills (Oglala Lakota) was born in 1938 in Pine Ridge, S.D. His mother, Grace, was non-Indian and his father, Sydney Thomas Mills, was a tribal member. They gave him the Lakota name Makoce Te’Hila, “Respects the Earth.” The family was raised Catholic on the Pine Ridge Reservation, but Mills credits his father for a traditional grounding. When Mills was eight, his mother died.

In his many speeches, Mills condenses a lifetime of experience into stories about his father. He talks about going fishing with his father after his mother’s death. “My father took a stick and drew a circle on the ground,” Mills says. “He said, ‘Stand inside.’” The father told his grieving boy to look inside his heart and sort out his tangle of emotions – anger, jealousy, resentment – and then leave them behind.

But when Mills was 12, his father died. He was raised by his older siblings until the age of 15 and then enrolled in the Haskell Institute boarding school in Lawrence, Kan. Adolescence is hard enough, but for an Indian boy caught between two cultures without parents for support, the dislocation was intense. Mills speaks movingly of nearly being overwhelmed and contemplating self-destruction. His story resonates with Native youth, who face a suicide rate twice the national average.

Mills credits his salvation to his father’s words, “It’s the pursuit of a dream that heals you,” and to the dream he developed after his mother’s death, that of being an Olympic athlete. He also began to develop the running talent that might just make the dream possible. His distance running at Haskell gave him a choice of colleges, and he settled on the nearby University of Kansas.

But his trials were hardly over. Mills was interviewed by his friend, the runner Kenny Moore, for a recent major article in Runner’s World magazine and spoke candidly about his difficulties with the famous Kansas coach Bill Easton, who shared common stereotypes about his runners. “When Mills said he’d like to try a little more speed work,” wrote Moore, “Easton said, ‘Billy, Negroes are sprinters. You’re an Indian, and Indians run forever.’”

It was only after college, and three years as cross-country All-American, that Mills truly began to flourish. In 1962, he enlisted in the U.S. Marine Corps to train for the 1964 Tokyo Olympics. It was a common complaint at the time that the International Olympic Committee insisted on strict amateur status for western athletes but turned a blind eye to the full-time training of the state-sponsored Communist bloc competitors. The Marine Corps returned the favor, fielding a full-time track team. It sent Mills to run the 10,000 meters in a meet in Belgium where he first encountered the dramatic finishing kick of the great Tunisian Mohamed Gammoudi. After the race, Gammoudi advised Mills to do more speed work.

At the Tokyo Olympics, the big names in the grueling 10,000-meter run were Gammoudi and the Australian star Ron Clarke. No one had heard of Billy Mills. But that was about to change, in what is widely considered one of the greatest upsets, and greatest track races, in Olympics history. Clarke set the pace through the race, with his trademark surge every other lap. Only three other runners kept touch, one of whom was Mills. In the last lap, as the leaders lapped other runners, Clarke felt boxed in and pushed Mills into an outer lane. Gammoudi also surged past. Mills seemed finished.

But the footing in the outer lane was firmer, and Mills had saved his strength for a last all-out kick. He had been diagnosed with Type 2 diabetes, Mills said, and knew his blood-sugar level could sustain only one final effort. But Mills also had spiritual support. As he lapped a German runner, he thought he saw an eagle on the other man’s insignia. The sight reminded him of his father’s words long ago: “right now your wings are broken, but someday you will have the wings of an eagle.” Mills sprinted down the center of the track, arms pumping wildly.

As the TV announcer continued to focus on Clarke and Gammoudi, the color commentator Dick Bank shouted from behind, “Look at Mills! Look at Mills!” (and was later fired for the interruption). Mills crossed the line arms raised and a large exhausted smile on his face, in one of the iconic Olympic images. Minutes later he sought out the German runner to thank him for making room; but when Mills saw the jersey up close, there was no eagle on it. “It was all a matter of perception,” he recalls.

The race set a new Olympic record and beat Mills’ previous best time by nearly 50 seconds. It remains the only time in Olympic history that a runner from North or South America has won gold in the 10,000 meters. But Mills has turned his fame to another long-distance effort. He now delivers hundreds of speeches a year, speaking on Lakota values and the Olympic ideal, but above all encouraging youth who are suffering from the dislocation he once felt to save themselves through their dream.