When They See Us

As an Alaska Native (Tlingit/Dena’ina) writer who has been a playwright and journalist for decades, I was used to the frequent societal demand for entertainment from our Indigenous cultures, with no investment back into them. I was used to going into meetings with editors and producers wearing the armor of every Native, prepared to battle for the smallest modicum of authenticity in stories or scripts while the same old Alaskan stereotypes were given prime space. I was never expecting to get what Alaska Natives always wanted—to be represented truly as we are. 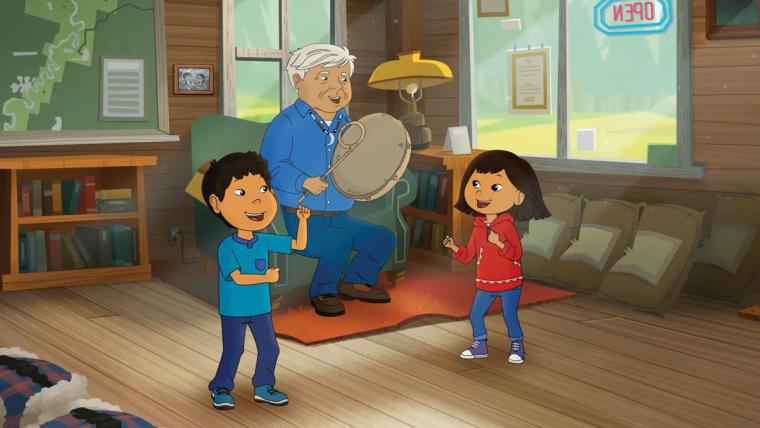 In the “Molly of Denali” episode “Grandpa’s Drum,” Molly (right) and her friend Tooey encourage her Grandpa to play Native music again to help him heal from his childhood experience of being forced to attend a U.S. government boarding school. There, Indigenous children were forbidden to express their Native cultures. Alaska Native boarding school survivors and elders served as consultants on the episode and Alaska Native producers oversaw each scene.

In the “Molly of Denali” episode “Grandpa’s Drum,” Molly (right) and her friend Tooey encourage her Grandpa to play Native music again to help him heal from his childhood experience of being forced to attend a U.S. government boarding school. There, Indigenous children were forbidden to express their Native cultures. Alaska Native boarding school survivors and elders served as consultants on the episode and Alaska Native producers oversaw each scene.

So in 2017, when the Boston-based public television channel then known as WGBH asked me and other writers to show up in Fairbanks, Alaska, prepared to pitch three episode ideas for a new PBS KIDS animated children’s series about an Alaska Native girl called “Molly of Denali,” I anticipated how the session would go. I was the only Alaskan and only Native person on the show’s first writing team, and I had walked into the writer’s room armed with pitches similar to what I thought the others would write. The Alaska you see in myth and movie is not the Alaska I know. So I wrote depictions of an Alaska that doesn’t exist and tried to sneak in the unseen Alaska.

At first, to my delight, I was surprised that the ideas from these non-Alaska Native writers were stories I recognized—topics I had never seen on television. I was hearing pitches about Native kids being forced to attend boarding schools, eating herring eggs and receiving a Native name. Then, to my horror, I realized that I probably had brought the most stereotypical Alaska Native story ideas of the bunch.

In addition, I had never been allowed to “just” be a writer before in a group with non-Native colleagues. I always had to take on the extra role of a teacher and make judgements about how much I could say before becoming the “bad guy” versus what parts of my culture I could allow to be incorrect.

At times the other writers on “Molly of Denali” would not understand a cultural nuance, mix up cultures or be way off base as to what Alaska Native life is like. Although I had initially steeled myself to be the person constantly correcting them, the five Alaska Native leaders and elders in the advisory group were always there before me, educating and suggesting new ideas.

Not all depictions of Native cultures are such sterling examples of appreciation, however; some are appropriation. Distinguishing the difference is a hot topic for Native peoples, one that kicks into high gear around Halloween and follows us through Thanksgiving. But it’s an evergreen issue.

Artistic items for purchase tend to be the gateway to questions about what is appropriation versus appreciation—and I love to be asked. By far the kinds of question I field the most are “Can I wear these beaded Native earrings I bought?,” or “Am I allowed to display this carved mask?” Such questions tell me the people asking them are really thinking about the consequences of their actions. These questions also tell me they are already appreciating their Native-made item and they want to make sure they are doing so respectfully. I love that they love Native art.

To those who ask such questions, my answer is simple. First, check whether the item is actually created by an Indigenous person. Research the item thoroughly before buying, including, if you can, asking the seller who made it. You can also look out for red-flag phrases such as “Native inspired” or “Native style,” which gives it away as not being authentic. If it was Native made or designed, if it benefits a Native person or tribe, if the person who created it intended it to be displayed, then “Yes!” Yes, purchase that, wear that, display that and celebrate that Native-made item. These are great ways to support Indigenous people.

Yet I’ve seen plenty of people grappling for answers to questions that aren’t so straightforward. Is it “appreciation” when an overtly racist Native mascot is changed to a “respectful” Native mascot? When a child wants to dress up like his or her favorite Native character for Halloween or otherwise? When you’ve found a spiritual practice you connect with, but it’s not from your culture? When it’s something you’ve heard Native people say but now another Native person is saying is incorrect, or even offensive?

While there are better and worse answers for many of these and plenty of other relevant questions, ultimately, I respond by asking “Who does this benefit most?” If it does seem to benefit the cultural group it’s from, the next question is “Is that the best way to go about it?

Take something like team mascots. Who does a mascot named after a Native-related term benefit? Multiple studies show even “respectively named” mascots are harmful to both Native and non-Native populations. For instance, in communities whose high schools or colleges name their team mascots after what they think are good Native terms, Indigenous youth have lower self-esteem and higher rates of non-Native people believe stereotypical things about Native people. So in this case, a select group of people may benefit financially from selling team merchandise or promoting a false image and many others are harmed. Appropriation.

But say you find a gorgeous piece of Tlingit jewelry you’d like to incorporate into your wedding. You bought it directly from the Tlingit artist, you know what the bracelet design means, you asked the artist about it and shared information about from where the piece came with anyone who asked. Appreciation.

If you want to learn about Native cultures, start with the Indigenous groups whose land you are on, look for resources they might have already provided and listen. But make sure you are always looking for answers in the culture you’re asking about. As a Tlingit and Dena’ina woman, I have no business telling you how to appreciate Lakota traditions (aside from telling you to ask them). And if I myself want to write a story including Lakota characters, I know I’m going to start by talking to Lakota people.

The lesson I learned working on “Molly of Denali” has been a great reminder for me as I write characters of other cultures, sexual preference, physical ability and gender for other shows and movies. When writing about a Filipino dish, I consult, pay and credit a Filipino person. When I am arguing for inclusion of people who look like me, I remember to advocate for others who don’t look like me but who also don’t get as much representation.

Distinguishing between cultural appropriation and cultural appreciation can be messy and hard. I get it wrong a lot. But you can’t duplicate the kind of rich understanding of other cultures that comes out of making the effort. Most importantly, I guarantee you that instead of perpetuating the constant message to Native people that what we have is for the taking, you are helping us feel seen. In a country that has institutionalized Native erasure, feeling seen is no small thing.

In addition to her role as a writer for various television projects and programs such as “Molly of Denali,” Vera Starbard (Tlingit/Dena’ina) is the editor of First Alaskans magazine and a playwright in residence at Perseverance Theatre in Douglas, Alaska, through the Andrew W. Mellon Foundation’s National Playwright Residency Program.