Fighting the Nazis: A Creek Indian Wins the Congressional Medal of Honor

The Italian Campaign in World War II was a bloodbath. Allied forces slogged their way up the length of the peninsula against German forces dug into higher terrain. Here, Ernest Childers (Muscogee Creek) became the first American Indian to win the Congressional Medal of Honor in World War II.

It was the first one awarded to an American Indian since the 1880s. 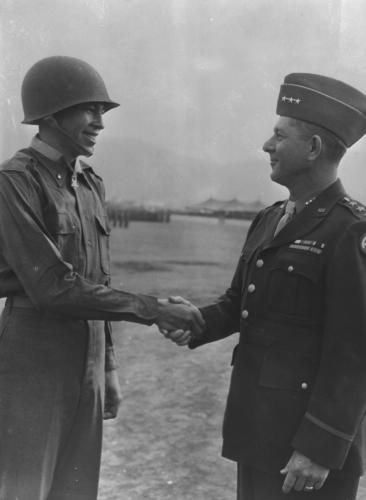 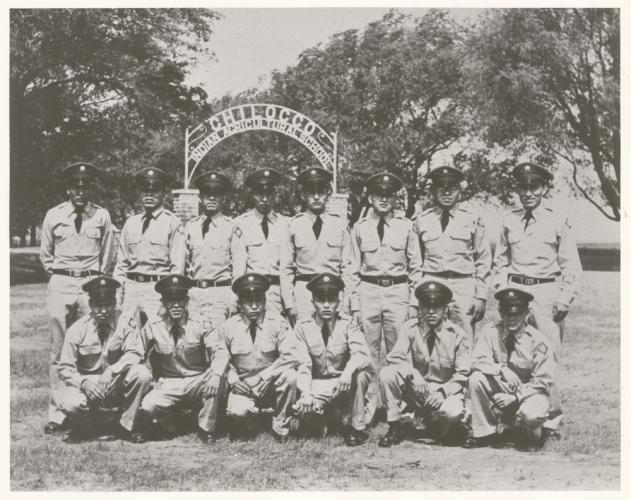 Childers was among the more than 44,000 American Indians that saw active duty between 1941 and 1945, including nearly 800 women. They participated in every theater of World War II – Europe and North Africa, as well as in the Pacific. Unlike African American troops in the war, American Indians were not segregated by race and were included in regiments with white soldiers to defeat the Nazis.

As one of the Five Civilized Tribes, Childers’ Muscogee people had resisted American control and dispossession in two wars – 1813–1814 and 1836 – but had been forcibly removed from their homeland in the Southeast, mostly in Alabama, to the Indian Territory in the Trail of Tears during the Presidencies of Andrew Jackson and Martin Van Buren in the 1830s. They faced internal divisions and internecine conflict during the Civil War, when Creeks fought on both the Union and Confederate sides. After the war they re-established themselves at their new capital of Okmulgee as the Creek Nation. Their land in the Indian Territory (now Oklahoma) originally totalled two million acres. However, in the 20 years from the late 1880s to the first decade of the 20th century, they had to deal with a series of congressional acts – the opening up of the Indian Territory and its resulting land rush, allotment policies that divided common tribal lands into fee simple parcels and the dismantling of the Five Civilized Tribes’ governments. The result was much of their land base and natural resources were lost, sold off to survive their impoverished conditions or foreclosed to pay taxes now imposed by the counties and Oklahoma, which became a state in 1907.

Childers’ father, Ellis B. Childers, served the Creek Nation as an attorney. Childers himself was one of five brothers, and was born in Broken Arrow, Okla., on Feb. 1, 1918. At the time, Broken Arrow had barely 2,000 residents (now it has well over 100,000). He grew up on a farm that was his father’s original allotment.

When Childers was 12, his father died. Children were forced to grow up fast in Oklahoma of the 1920s and early 1930s. It was the era of the Dust Bowl. Poverty was everywhere, not just in Indian communities. Childers said in later interviews that as a youngster he perfected his sharpshooting with his hunting rifle when he bagged rabbits to put food on the table for himself, his widowed mother and his brothers.

By the late 1920s, Childers was sent off to Chilocco Indian Agricultural School, a large federal Indian boarding institution established in 1882, located in Newkirk, Okla., near the Kansas border. Classes there went from the elementary grades through high school. The vast co-ed school complex, that included well over 5,000 acres and at its peak nearly 100 buildings, took in Indian students not only from Oklahoma, but from many other parts of Indian Country. In its century of existence 8,500 American Indians representing 124 tribes attended. As was true of most federal boarding schools during most of the period of Childers’ enrollment, the institution had an assimilationist focus as well as strict military styled regimentation. During World War II, 25 of its former students gave their lives fighting for the United States.

After graduation from Chilocco in 1937, Childers and some of his school chums enlisted in the Oklahoma National Guard. He was assigned to C Company of the 180th Infantry Regiment of the 45th Division. He rose to the rank of sergeant in the unit, which was called up to federal service in 1940. (See “The Thunderbird Division,” on page 22.)

The 45th, soon to make its name as the famed Thunderbird Division, plunged into the heavy fighting in the Allies’ bloody Italian Campaign. It began on July 10, 1943 with the invasion of Sicily. Between 60,000 to 70,000 Allied soldiers were killed in this campaign. The massive Allied invasion was led by General George Patton’s Seventh Army and British General Bernard Montgomery’s Eighth Army. During the campaign in Sicily, Childers was promoted to second lieutenant. By August 17, the Allies had succeeded in driving the Germans off Sicily, forcing them to retreat to the Italian mainland.

On September 3, Montgomery’s British Commonwealth contingent landed on the southernmost part of the Italian mainland. On the same day, American General Walter Bedell Smith and Italian General Giuseppe Castelano agreed to an armistice at Cassibile, Italy. Five days later, General Eisenhower formally announced that Italian military commanders had signed an accord pulling out of the war. But German forces took command of the war, and Italian troops loyal to Mussolini continued to fight the allies almost to the end. On September 9, General Mark Clark’s Fifth Army, landed at Salerno facing heavy resistance.

The Fight at Oliveto

Childers’ battle at Oliveto took place on September 22. His heroism seems to be right out of General George Patton’s famous quote: “Infantry must move forward to close with the enemy. It must shoot in order to move…. To halt under fire is folly. To halt under fire and not fire back is suicide. Officers must set the example.” That is precisely what Childers did on that day. In the pre-dawn mist, his 180th regiment came under heavy German fire. He fell into a shell crater and fractured his instep. He struggled to the aid station. The makeshift facility was soon destroyed by a German mortar shell killing the army physician on duty. Childers’ unit was pinned down by heavy gunfire from houses occupied by German soldiers on top of a hill.

Loaded down with a more than 60-pound backpack including clothes and helmet, carbine and ammunition and assorted equipment including canteen, field bag, K-rations and first aid pouch, the injured Childers and eight men under his command worked their way up the mountainous terrain towards the enemy machine gun nests. They then advanced to a rock wall overlooking a cornfield. Childers ordered his men to cover his movement up the hill so that he could crawl up towards the houses.

Fired upon by two German snipers, Childers sprayed the house with gunfire, killing two of the enemy. He then took out the remainder of the Germans in the first enemy machine gun nest. He crawled behind another house where a second machine gun nest was operating. The American officer then began throwing rocks towards the enemy position. Thinking the rocks were hand grenades, the Germans came out in the open. Childers shot and killed one of the Germans, while another of Childers’ men killed a second enemy, wrapping up the second machine nest.

Childers continued up the hill, singlehandedly capturing a mortar observer. He later reflected on the capture:

"The German must have been watching the action, because he came out toward me, I was on my knees training my 30-caliber carbine on him. I was yelling to one of my men “Take him prisoner!” My sergeant yelled back, “Shoot the bastard.” I yelled. “I can’t, I’m out of ammunition.” My body was wet with sweat since the German was fully armed, and I was holding an empty rifle on him. That German was the only surviving German in the entire action of the day."

After recovering from his fractured instep, Childress rejoined the 180th. He faced other combat in the Italian campaign. The hilly terrain of central Italy proved an advantage to the troops of Germany and Mussolini, and the Allies were unable to dislodge the Nazi forces under the command of Albert Kesselring. Childers and the 180th took part in the 136-day Battle of Anzio (Jan. 22–June 5, 1944). This bloodbath resulted in 43,000 Allied casualties, including 7,000 killed. Childers was wounded in battle and taken to a military hospital in Naples. On April 8, as nine army companies stood at attention General Jacob L. Devers, deputy commander of the Mediterranean Theater, awarded Childers the Congressional Medal of Honor. The citation read: “For conspicuous gallantry and intrepidity in action on 22 September, 1943, at Oliveto, Italy.”

On leave, Childers returned state side. He went to Washington to meet with President Roosevelt at the White House. On April 26, 1944, Broken Arrow honored him with the largest parade in its history. According to the Interior Department’s publication Indians at Work: “Schools and businesses were closed; the entire population of the town and surrounding country turned out; the parade was impressive; and the key of the proud little city was presented to the home-town boy who had indubitably ‘made good.’”

Childers’ military honors during the war included the Bronze Star, the Purple Heart, the Italian Cross of Valor and the Combat Infantryman’s Badge. He later received the first Oklahoma Distinguished Service Medal from his home state’s legislature.

Childers remained in military service through the Korean War and the first years of American involvement in Vietnam. In 1965, he retired from the United States Army as a lieutenant colonel and returned to Oklahoma. In 1994, a nine-foot statue of Childers in uniform was dedicated in Veteran’s Park in his hometown of Broken Arrow. A middle school in his hometown and a VA outpatient clinic in Tulsa were also named in his honor.

On March 17, 2005, Childers died in Tulsa at 87. With full military honors, a dual citizen of the Muskogee Creek Nation and the United States, he was buried at Floral Haven Memorial Gardens in Broken Arrow, not far from where he had grown up.