The Continuing Saga of Louise Erdrich

With due respect to Bob Dylan, many in Indian Country feel the next Nobel Prize for Literature should go to Louise Erdrich. The prolific Minneapolis-based writer, from the Turtle Mountain Chippewa Band of Indians, has been spinning her tribal and regional histories into a saga spanning 15 much honored novels. Her complex interweaving of her characters’ lives over several generations has caused some to compare her to William Faulkner. In the past two years she has won the 2016 NMAI Award for the Arts and the 2015 Library of Congress Prize for American fiction, and the list over the past decade is much longer. She also supports other Native writers through her Minneapolis bookstore Birchbark Books. 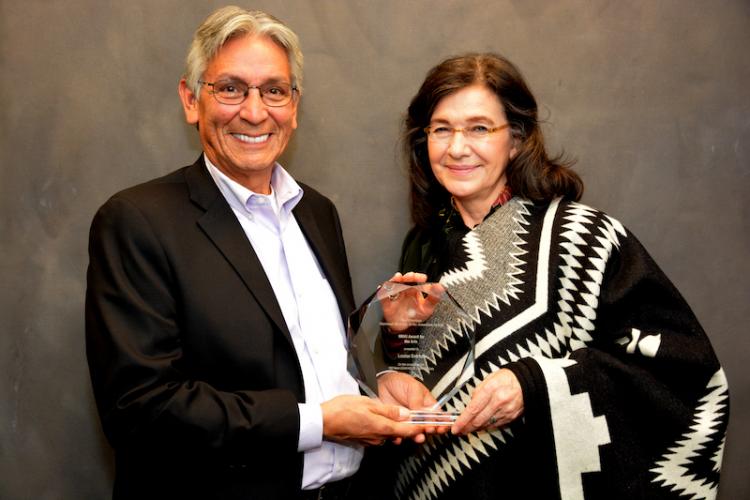 Louise Erdrich receiving the NMAI Award for the Arts from Director Kevin Gover at the Museum’s Legacies of Learning Gala, May 11, 2016. Photo by Joshua Voda

Louise Erdrich receiving the NMAI Award for the Arts from Director Kevin Gover at the Museum’s Legacies of Learning Gala, May 11, 2016. Photo by Joshua Voda

Erdrich’s books frequently deal with important issues of social justice. But she writes almost poetically in a way that doesn’t sound like propaganda. “Both sides of my family, the German and the Indian, were great storytellers,” she says. “A book needs suspense, and the issues have to be part of the suspense. I try hard not to go on a rant because people don’t want to read that. So any environmental or other issue is part of the narrative.”

In her North Dakota Ojibwe communities, most of the outsiders are French, German and Swedish. Her stories about these people include love, intermarriage, stolen lands, murder, racial prejudice, religious conversion and a tense co-existence. French words mix with the Ojibwe language. Even in scenes from the 1970s and 80s, the main non-Indians are descendants of these Europeans. Erdrich’s Ojibwe families track several generations.

Although she says she does not write about her family in her books, her mother, a continuing vital influence, has inspired her to research her ancestors. A future project is partly based on her maternal grandfather’s experiences in Indian boarding school. Because of the schools’ affiliation with the federal War Department, records on each child were heavily archived. Erdrich found her grandfather’s files in the Library of Congress and was surprised at the details about all aspects of his life, such as meticulous lists of his clothing costs. The beautiful penmanship he learned in the boarding schools provided the jacket cover design for her latest novel, La Rose.

Her recurring elderly characters, like Star, Mrs. Webid, Mooshum, Nanapush and Grandma Ignatia, crack funny, lewd jokes, tease each other and play sexual tricks, usually in an effort to shock their adult children, grandchildren and priests. She says, “Over the years I have known many elders who are hilarious on the subject of sex. It seems to me that people who find humor easily in general age well.”

Earlier this year, Erdrich went on a book tour in support of her latest novel La Rose. We caught up with her as she gave a riveting reading at the Folger Shakespeare Theatre at the Library of Congress in Washington, D.C. The book centers on a young boy, La Rose, whose parents give him to a neighbor’s family to atone for his father’s accidental killing of the neighbor’s son while deer hunting. Since the two boys’ mothers are half-sisters, transfer to the other family, while traumatic still has a familial context. Both families are consumed by grief, suicidal thoughts, loss and anger, but eventually La Rose and his two families achieve a type of healing and resolution.

Adoption of relatives and even strangers was practiced in the past by many American Indians for population recovery after disease, warfare and other genocidal practices. This contemporary adoption was based on traditional practices that La Rose’s birth family, the Landreaux Iron, embraced through sweat lodge and other ceremonies. The novel has been positively reviewed by The New York Times and The Washington Post with emphasis on the adoption phenomenon.

Following her reading, Erdrich discussed the use of adoption to restore balance. She mentioned her maternal grandmother’s frequent informal adoptions of children whose families were experiencing problems. She contrasted her grandmother’s flexible adoptions with the character Nola who at first did not want to share La Rose with his birth mother's family. Erdrich discussed the fluid boundaries between indigenous families that allow relatives to share in the raising of children without dealing with social services.

Erdrich’s historical fiction frequently casts light on current social phenomena. She singles out The Last Report on the Miracles at Little No Horse. “The book is my favorite among my books and the sermon to the snakes one of my favorite pieces of writing,” she says. In this novel, the priest, the recurring character Father Damien, turns out to be a woman. As he/she is aging, Father Damien is concerned that his real identity would be discovered during an illness that would require a thorough medical examination.

I asked if she thought this novel would have received more attention if it were published now rather than 15 years ago. She remarked that there was a transgender movement when she wrote the novel but that now there is considerably more power in that movement. She says, “I have read accounts of women who lived out roles more traditionally male, and in fact my character in the Birchbark House series, Old Tallow, is based on research into traders’ journals.

“The Catholic Church did have very negative effects on all aspects of Ojibwe culture and spirituality. In traditional Ojibwe culture there was the sense that a person we would now call transgender could operate within the culture, living out their roles. I am aware of an Ojibwe woman who was a well-known hunter and warrior. Also recorded around 1850 was a man called The Sweet whose Indian name was Wishkob. The Sweet lived differently gendered but there was not a great deal of controversy about him. People who lived differently than their gender were considered to have a broader spirituality and see things from a different viewpoint. My book The Antelope Woman, which is being revised, deals with this topic and has a character with special gifts for giving traditional names.”

Her current novel La Rose has been linked with two earlier works confronting violence on the reservation. Her 2009 novel The Plague of Doves deals with lynching. It has fictional characters who escape getting lynched, fictional characters who are lynched and a historical figure, Holy Track, a 13 year-old boy who was lynched in North Dakota. Says Erdrich, “The inclusion of a lynching which did take place in North Dakota was important to me because that isn’t an atrocity usually associated with Native people. I wanted to make clear how little is really known or studied about Native people. The subject is complex but I feel that our country would grow and develop by including the truth in our national story.”

Set in the 1980s, her novel The Round House revolves around the topic of rape and murder on reservations and laws that prevented tribal authorities from prosecuting non-Indians who committed federal offenses such as rape and murder. (The novel won the National Book Award in 2012, the year of its publication.) In the Afterword section of a new edition of The Round House, Erdrich wrote about North Dakota Senator Byron Dorgan’s 2016 sponsorship of the Tribal Law and Order Act and President Obama’s signing of the act into law.

Erdrich says, “President Obama has been very responsive to Native Americans and the issues that we face. Obama was behind The Violence Against Women Reauthorization Act that gave tribal courts the authority to get justice for Native American female victims of sex crimes committed by non-Native men. This Reauthorization Act was huge, a great thing. Prior to this act tribal courts had no jurisdiction over non-Indians who were guilty of rape and murder. Jurisdictional power was given back to our tribal courts.”

In addition to adult novels, Erdrich writes and illustrates children’s books, and also writes poetry and non-fiction. She attributes much of her ability to successfully create fi ction for all ages to the influences of her mother and her sister Lise, who is also a writer. Both of them have traced their family back to Madeline Island.

Erdrich says that she is following her mother’s journey. She is also inspired by her great grandfather who was one of the last Ojibwe buffalo hunters. He lived through the beginning of the reservation era and died in 1963 around age 96 or 97. Erdrich plans to write about that era in upcoming projects.

She also says she writes children’s books out of frustration with the Little House on the Prairie series by Laura Ingalls Wilder, a semiautobiographical account of European settlers in the upper Midwest in the 19th century. Erdrich thinks that series is full of racism “and the valorization of those who took Native lands without a thought.

“I want to give a sense to young people of how Ojibwes did household chores and also had close family structures like the ones portrayed in The Little House on the Prairie during that same time period. Ojibwe families lived on very little, and we wasted nothing and left no ecological disasters.”

Commenting on the relationship between writing poetry and fiction, Erdrich replies, “I have no control over poetry. It either flows or it doesn’t. Stories seem more able to overflow into longer works that become books. Poems are so themselves.”

Non-fiction dealing with political struggle was another matter. She said during her Library of Congress reading, “I have so much trouble writing true things that have to be backed up factually. A Minneapolis congresswoman in the audience shouted out, ‘Lots of people in politics struggle with that!’” causing lots of laughter. Erdrich said that she didn’t realize her independent bookstore Birchbark Books would be political but that it is. It has become a Minneapolis center for urban Indians to discuss community issues and other relevant topics. Contemporary Native writers frequently visit and sign their names on the wall.

At her reading, Erdrich encouraged the audience to check out the Native writers from an earlier panel in the program, part of the Proud To Be Indigenous Weeks celebration at the United Nations and around the world. She said that she opened Birchbark Books in 2001 to feature new and emerging Native writers and make them more accessible. She at first thought it would never survive but is now more optimistic. Her store, she says, “brings people back to reading more physical books and discovering Native writers like Sherman Alexie, James Welch and Leslie Marmon Silko.” She also highlights a new non-fiction writer, Brenda Child, whose work focuses on women and how women’s work shapes Native life.

Erdrich cautioned that American Indians have many nations as different as the French or Chinese. She said as a final thought she was concerned with “encouraging Native writers to tell their stories so that it is clear that there are many different nations with different viewpoints on important issues. It takes four to five generations for a people to recover from terrible trauma, and writing helps in the recovery process. It is only since 1978 that our right to traditional spiritual practices was legalized. Writing centered on our nations must be encouraged of every age group!”