Confessions of an Eco-Tourist

I arrived on a tight schedule in Banos, a town on the eastern side of the Ecuadorean Andes where the mountains descend into the Amazon basin. Banos is one of the gateways to the Amazon and a popular departure point for tourists heading into the jungle. My goal of an in-depth excursion into the Amazon, which required three or four days, would elude me because my flight departing Quito didn’t leave me with suffi cient time. My only option appeared to be a set daytrip along the edge of the jungle. 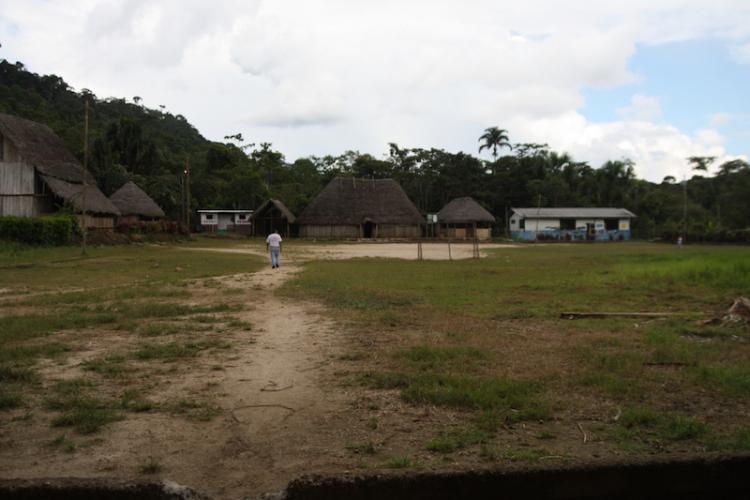 Cotococho is a Kichwa community at the eastern foot of the Andes mountains in Ecuador’s Amazon Basin.

Cotococho is a Kichwa community at the eastern foot of the Andes mountains in Ecuador’s Amazon Basin. 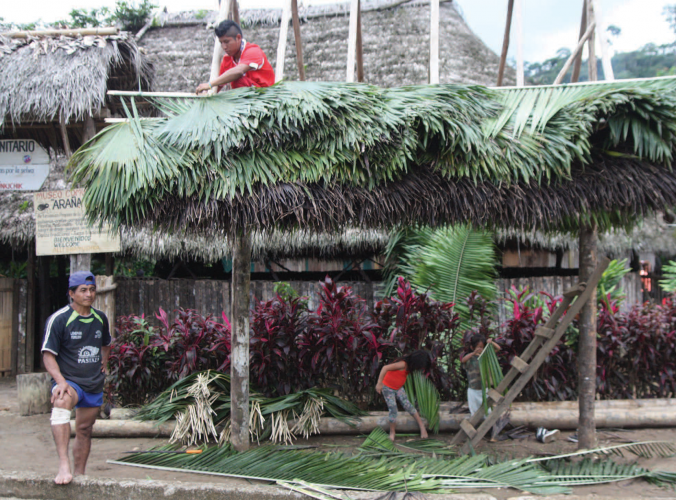 The Cotococho community is one of many indigenous communities in Ecuador who use tourism as a means of sustaining their traditions and entering the global economy.

The Cotococho community is one of many indigenous communities in Ecuador who use tourism as a means of sustaining their traditions and entering the global economy. 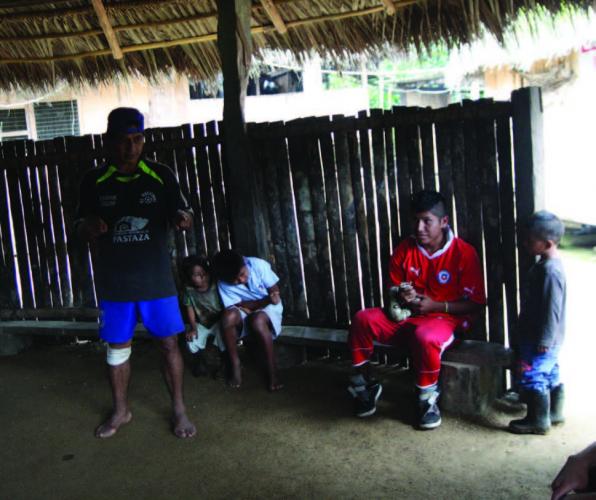 The village chief jokes with tourists in Spanish before the English language tour begins.

The village chief jokes with tourists in Spanish before the English language tour begins. 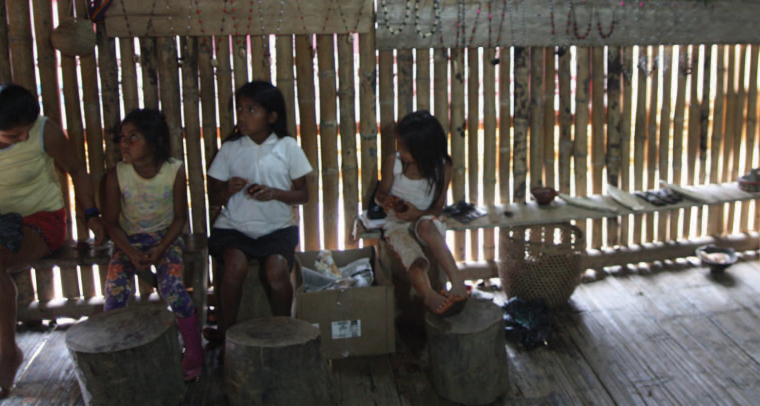 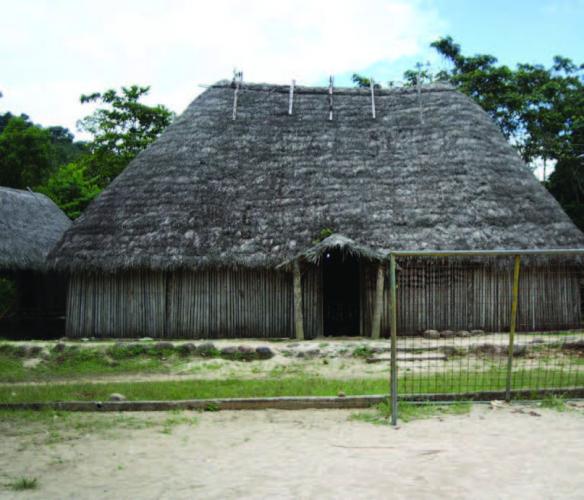 A traditional community building sits behind the village soccer field.

A traditional community building sits behind the village soccer field.

It began with a stop at the Zoo Refugio Tarqui, where the environmental police bring animals that have been rescued from traffickers or whose habitats have been otherwise threatened. After the zoo we would visit the Cotococha jungle Kichwa community and then hike a short distance into the Amazon to a waterfall.

I’ve never been fond of zoos. Seeing large cats, on the verge of madness, pacing in their cages doesn’t appeal to me. For me the bigger and more complicated dilemma was the visit to the Kichwa community. The prospect of visiting a zoo of captive animals followed by a visit to an indigenous community left me ambivalent about the moral implications. It harkened to a colonial view of American Indians as part of nature, noble savages living within a pristine myth. Such romanticized perceptions of indigenous peoples as exotic protectors of the environment, living in harmony with nature, are still common today. This fanciful impression is one reason why visits to indigenous communities have been lumped into the category of eco-tourism.

Viewpoints like this deny indigenous people any agency or self-determination about their participation in the evolving world. They maintain the expectation that native cultures are static and deny the reality that they, like all cultures, are evolving. In turn, fictitious or altered realities of indigenous life, such as ayahuasca ceremonies, are delivered and commodified to satiate the expectations of tourists. This phenomenon is not new. It was common long before Buffalo Bill Cody made his name touring the world with his troupe of “noble savages.”

I was also concerned about the socioeconomic ramifications of tourist visits to native communities. Until the late 1980s, most indigenous communities in the Ecuadorean Amazon resisted tourism as infringement on their lands and way of life. But by the 1990s some communities began to see eco-tourism as a means to legitimize their claims on the land, as well as a way to enter the global economy and erect a bulwark against transnational resource-extraction activities in their vicinity. This entrance into the eco-tourism industry has come with some pitfalls. It has engendered competition between neighboring communities as well as with non-indigenous tour operators. In many cases tour and hotel operators have used indigenous people as props to fulfill the curiosity and expectations of tourists. In these cases, the communities are at the economic mercy of tour operators, and they have little influence over the way their culture is presented, or misrepresented.

As indigenous communities have become increasingly savvy they have organized and created networks such as the Napo RICANCIE, a group of Kichwa communities on the Napo River that operate collective eco-tourism activities. The Napo RICANCIE is in turn a member of the Plurinational Federation of Community Tourism of Ecuador, which represents community initiatives throughout Ecuador. Better organizational practices, and networks like Napo-RICANCIE eventually allow many indigenous communities greater self-determination, both economically and in the way they choose to present their culture, but tourism still presents problems.

Members of the Napo RICANCIE bemoan the impact on their culture. Youth are “trying to be like visitors in terms of clothing, expression and thought,” they say. At the same time they acknowledge that these changes are also part of the development of the community towards their goals of greater access to the education, food and housing, which eco-tourism facilitates. Similarly, in the Chichicorumi Kichwa community, many members observe the technological devices such as cellphones and cameras that tourists bear and desire those goods. But with little means to acquire them they often go into debt as they enter the global economy. Some people in the Chichicorumi community also worry about losing their traditional methods as members of the community “show the culture without really practicing it as before.”

Some communities no longer hunt, or plant and harvest their own food. Instead, they rely on money from tourism for subsistence. Communities which depend heavily on tourism as a source of income are also wed to the inconsistencies of the industry. Recent events such as the earthquake in Ecuador and the spread of the Zika virus deter tourists.

At the same time, tourism has supplied an impetus for some communities to recover and preserve some of their cultural practices. Members of the Napo RICANCIE suggest that tourism has “revalued the culture in terms of gastronomy, language and medicine” which otherwise might have diminished as the communities adopt outside influences. One example is the revival of chicha in some communities. Chicha is a slightly fermented beverage made from corn or yucca that is rich in vitamin B. In many communities this traditional beverage fell out of use when coffee and soda became available. With the advent of tourism its perceived value increased, and it eventually returned as a staple of some diets. These mixed results of tourism have complicated the dynamic between visitors and indigenous community members. What might be beneficial for one community can be harmful for another.

Ultimately I decided to go on the tour. I was convinced by my desire to hike through the jungle and my curiosity about how the Kichwa community of Cotococha would be presented. We drove to the village and our non-indigenous tour guide explained some of the cultural features of the Kichwa in the Amazon. We met the chief, who usually conducts the Spanish language tours, tasted some chicha made from yucca and were allowed to try our hands at a blowgun. I bought a wooden bead necklace from a young girl in a small thatched building that served as the community gift shop. I paid her five dollars and she put the necklace in a black plastic shopping bag for me, laughing and commenting in Spanish about the cartoon dog on my T-shirt. Our guide hustled us back to the bus and, after 40 minutes, my visit to the Cotococha Kichwa community was finished. I was off to hike through the jungle.

I am still not sure of the impact my visit had on the community, but maintaining awareness is critical in making the right decision. If we want to be responsible travelers it is imperative that we understand the impact we make when we visit other cultures. As the world becomes easier to traverse via globalization it allows us not only to consume a greater diversity of products, but it leads to a greater commodification and consumption of culture that is not always equitable. As we travel the globe in search of more “authentic” cultural experiences, it is our obligation to be aware of the effects our luxury has on the cultures we visit.