Complexity of Ecstasy: The Life and Sainthood of St. Kateri Tekakwitha

The prayers of faithful followers of Kateri Tekakwitha were answered when Pope Benedict XVI canonized the “Lily of the Mohawks” during a sunrise mass last October. Though the Mohawk maiden lived in her earthly body for only 24 years, she had a profound impact on the People of the Flint that would continue for centuries. 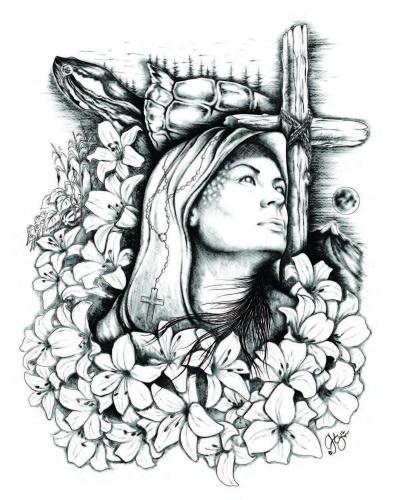 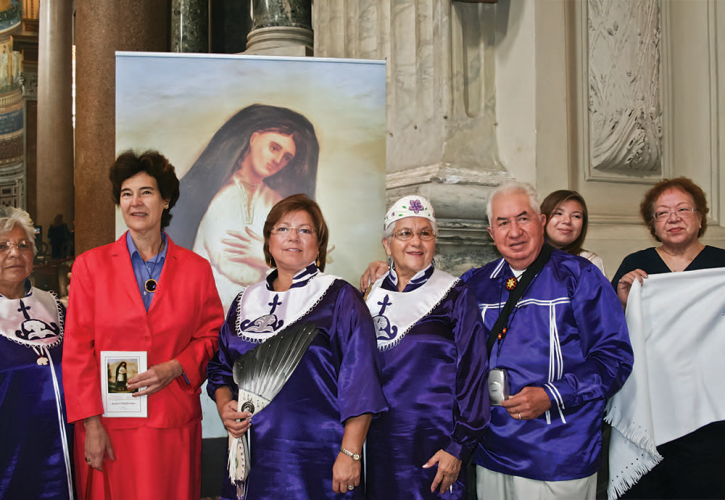 Members of the Akwesasne Mohawk Choir of St. Regis Parish Church join Anne Leahy, Canada’s ambassador to the Holy See, at the Mass of Thanksgiving in the Basilica of Saint John Lateran in Rome. Photo courtesy Michelle Adams

Members of the Akwesasne Mohawk Choir of St. Regis Parish Church join Anne Leahy, Canada’s ambassador to the Holy See, at the Mass of Thanksgiving in the Basilica of Saint John Lateran in Rome. Photo courtesy Michelle Adams

Replica of the Huron wampum belt, called a hortatory collar by Jesuit Father Claude Chauchetiere, given to Kahnawake Mohawks in 1677. Reproduction and photo courtesy of Darren Bonaparte.

Replica of the Huron wampum belt, called a hortatory collar by Jesuit Father Claude Chauchetiere, given to Kahnawake Mohawks in 1677. Reproduction and photo courtesy of Darren Bonaparte. 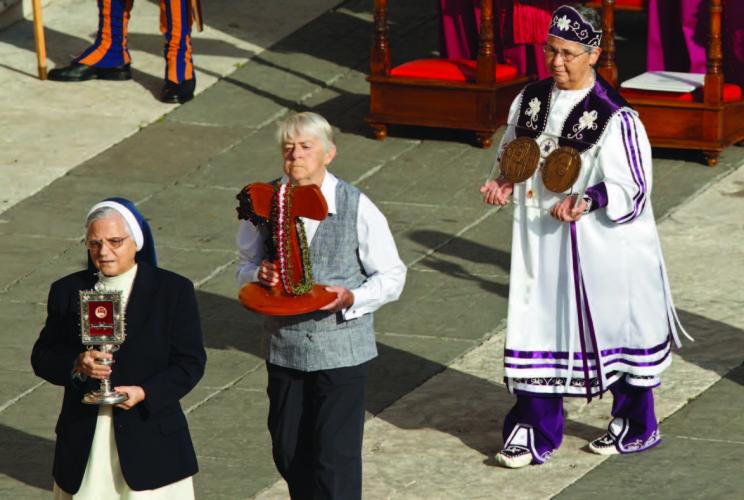 Sister Kateri Mitchell, the nun who prayed to Kateri Tekakwitha with the Finkbonner family in 2006, presents a relic to the alter during the Mass of Canonization. CNS Photo/Paul Haring

Sister Kateri Mitchell, the nun who prayed to Kateri Tekakwitha with the Finkbonner family in 2006, presents a relic to the alter during the Mass of Canonization. CNS Photo/Paul Haring 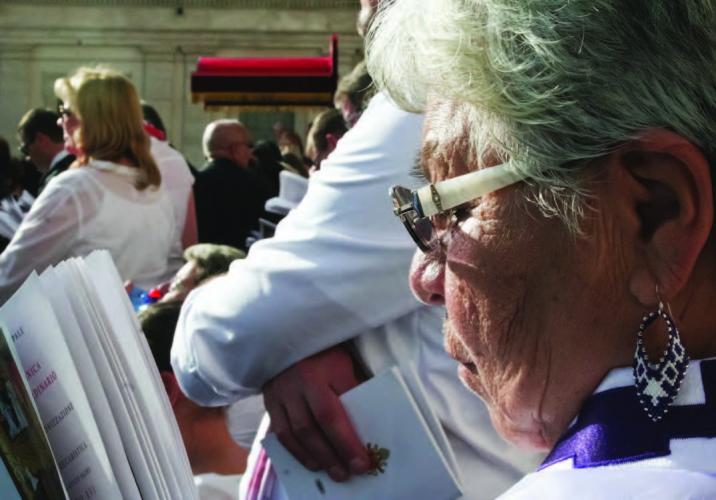 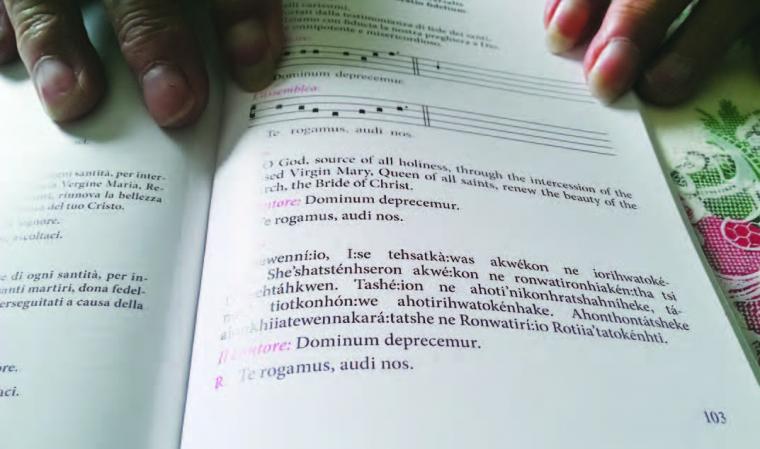 Louise Cook of Akwesasne displays the Mohawk verse of the Prayer of the Faithful that she read during the canonization. Photo courtesy Randi Rourke Barreiro

Louise Cook of Akwesasne displays the Mohawk verse of the Prayer of the Faithful that she read during the canonization. Photo courtesy Randi Rourke Barreiro

Born Tekakwitha (“She Moves Things Aside”) in 1656, she lived among her turtle clan relatives in the Mohawk Valley of what is now New York State. She was orphaned by a smallpox epidemic, one of several catastrophic waves that decimated the Iroquois population in the early 17th century. The disease left the child perpetually weak, afflicted with facial scars and poor eyesight.

Docile and modest, the girl escaped notice by hiding her face behind a hooded blanket. Tekakwitha considered her circumstance a blessing, according to Father Claude Chauchetiere, a Jesuit priest who knew her personally.

“She often thanked Our Lord for this favor,” he wrote in The Life of Good Katharine Tegakouita, Now Called The Holy Savage. “…[F]or if she had been pretty she would have been more sought by the young men, and so might have abandoned herself to sin as did the other girls in the country of the Iroquois.”

In recognition of her “resolve to live in a Christian manner,” 20-year-old Tekakwitha was baptized on Easter Sunday, 1676. She was given the name Katharine (“Kateri” to the Mohawks).

The context of Saint Kateri’s tumultuous childhood is crucial, but widely unknown. Her people were called “the Barbarians” by authors of the ethnographic Jesuit Relations as they describe the burning of the Mohawks’ longhouses, fields and abundant food stores. The “barbarians” suffered repeated attacks at the hands of the French.

Yet the girl remained unfailingly faithful to God and dutiful to the Black Robes who brought Christianity to Iroquois country. For them, Tekakwitha provided an exemplary subject about which to write home to Europe. It’s no surprise, then, that her Jesuit biographers also made an example of her. Mohawk historian Darren Bonaparte, author of A Lily Among Thorns: The Repatriation of Kateri Tekahkwitha observes that the priests “wrote in a way that emphasized her holiness…by contrasting her innate goodness with the sinfulness of her Mohawk kin.”

What were the Mohawks’ sins?

In the eyes of the colonizers of the Americas, the bodies of Indigenous peoples were a gateway to their lands. Andrea Smith in Conquest: Sexual Violence and American Indian Genocide puts it thusly: “Because Indian bodies are ‘dirty,’ they are considered sexually violable and rapable, and the rape of bodies that are considered inherently impure or dirty simply does not count.”

The sins of the Mohawks were their very lifeways.

Not long after another French invasion, Kateri’s people migrated from the Mohawk Valley to Kahnawake, a new mission by the rapids of the St. Lawrence River. “This may be the most significant moment in Mohawk history,” says Bonaparte. “It had to be a psychological event,” moving from our homelands to the land of the colonizers.

There the Mohawks forged a different kind of relationship with the Jesuit missionaries – many, but not all, became Christians. The “Praying Indians” or Onkwehonwe Tehatiiahsontha – “Original People Who Make the Sign of the Cross” – at Kahnawake came to attach themselves to the church that had nearly annihilated them.

At Kahnawake, amicable and familial relations between Christian and traditional Mohawks survived. Religion wasn’t the only draw in the North; expert hunters knew of the region’s thriving fur trade. There is even evidence, according to Bonaparte, that the “Praying Indians” recited a variation of Ohenton Karihwatehkwen, or “Words That Come Before All Else,” and observed the Strawberry, Seed and Harvest ceremonies of their ancestors.

But these new Christians took suffering very seriously, exceeding the Jesuits’ imaginations. Men frequently practiced self-flagellation. The women, however, went to extremes afforded by their new surroundings. They too chastised their bodies. They also rolled in snow during severe weather and even plunged themselves into the icy river to recite the rosary in Mohawk.

Still, none compared to Kateri Tekakwitha. She reportedly mixed ashes into her food so as not to reap any pleasure associated with taste.

“She went even further, and wished to share His pains…. She tortured her body in all the ways she could invent, by toil, by loss of sleep, by fasting, by cold, by fire, by irons, by pointed girdles and by harsh disciplines with which she tore her shoulders open several times a week.”

This fervor among the women was the origin of what Katsi Cook, a Mohawk midwife whose devout mother came from Kahnawake, calls the Kateri complex. It involves a hybrid force in which the “sinner,” historical warfare and experiences of trauma re-inscribed new meanings on the bodies, minds and spirits of Mohawk women.

“Mohawk women once understood our bodies through a cultural matrix in which the powers of our Mother Earth, Grand-mother Moon and our responsibilities within the matrilineal community informed our behaviors and shaped our desires,” explains Cook. “We expressed this in the practices of our agricultural ways of knowing and being.”

Kateri Tekakwitha’s consecration to God one year before her death creates a paradox that persists today. Was her “Mohawkness” diminished when she sacrificed her matri-lineal rights for perpetual virginity? Did she help forge a more diverse Catholicism at the Kahnawake mission that incorporated rather than refused the Mohawk language, thus aiding its survival? Why don’t Mohawks in general relate to her as an ancestor?

Louise Cook, a parishoner of the St. Regis Catholic Church at Akwesasne, has pondered why there seems to be a lack of intense adoration for Kateri among Mohawks. She says she has witnessed “a pure bond” such as that between a mother and child, between other Native people and Kateri.

“Yet, there’s respect for her,” Cook says. “We pray to her. We helped towards her canonization.” The retired language teacher helped translate the biography of Kateri Tekakwitha into Mohawk for the liturgy and was one of the few people invited to read from the Prayer of the Faithful at her canonization. She read her part in Mohawk.

Some Mohawks suggest that a full ex-amination of the complex relationship be-tween their people and the saint could be both painful and empowering.

“I saw Kateri as a symbol of discipline, fortitude and perseverance emblematic of our community of that time and of today,” says Audra Simpson, an assistant professor of anthropology at Columbia University who hails from the Kahnawake reserve. “She’s a symbol of our complicated and complicating history. I can’t disavow her as a ‘bad Onkwehonwe.’ She’s one of us. ”

“There’s an awkwardness about our history,” admits Bonaparte. He writes, “Even if we don’t embrace Kateri Tekahkwitha as a manifestation of Sky World on earth, we should at least recognize her as a Kanien’hehaka woman whose time and place in history is crucial for us to understand.”

Simpson agrees. “Kateri is a part of the history of our nation. We’re people who value a clear, engaging thought process. She’s challenging… but we’re up for it.”

Randi Rourke Barreiro is a Mohawk writer, editor and communications consultant. She resides on the territory of Akwesasne.