Bolstering Artisans of the Americas

As COVID-19 spread around the world and slammed the brakes on the global economy, Alejandra Challapa Castro did something she never thought she would do: she put away her loom. An Aymara weaver, Challapa had a business making hand-woven alpaca scarves, shawls and capes as well as other items for more than 30 years. She was about to walk away from a skill she had first learned from her mother when she was 7 years old. 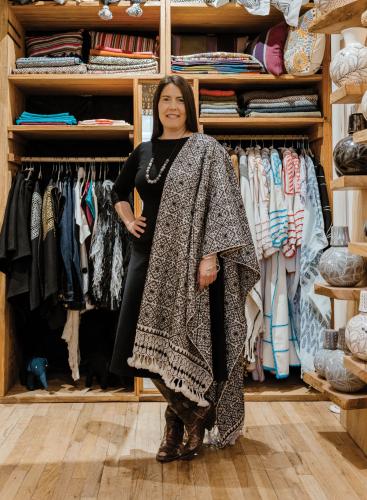 Heidi McKinnon has turned her eye for art and passion for preserving cultures into a way to support Indigenous communities.

Heidi McKinnon has turned her eye for art and passion for preserving cultures into a way to support Indigenous communities. 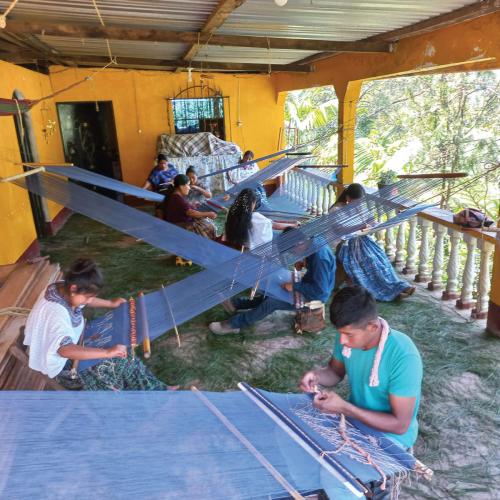 Heidi McKinnon raised funds so that these Q’eqchi’ weavers in Guatemala could restore their homes and business after two hurricanes hit their community.

Heidi McKinnon raised funds so that these Q’eqchi’ weavers in Guatemala could restore their homes and business after two hurricanes hit their community. 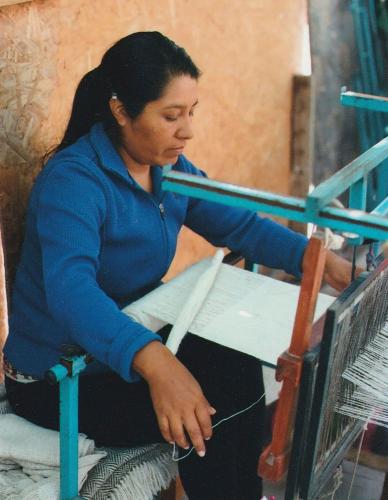 “I thought, ‘this is it for hand-made crafts,’” said Challapa, who lives in Arica, Chile. Then she received an email from someone thousands of miles away who she hadn’t heard from in years.

Heidi McKinnon was pursuing a lifelong dream: opening a shop that would feature the clothing, jewelry, pottery and other items made from natural materials and by artisans such as Challapa who she met during her years of travel through Latin America. “There’s so much beauty out there,” said McKinnon. “I just felt that people weren’t seeing what I was seeing, and I wanted to share it.”

She offered to sell Challapa’s works at her new shop, Heritage By Hand, which she then opened in Santa Fe, New Mexico, in December 2020. Challapa changed her mind about quitting, and her business has since survived the pandemic. “I cannot walk away from it easily,” said Challapa.

McKinnon, who is of Puerto Rican heritage, said that Latin America has long held a special place in her heart. Her professional and personal pursuits have revolved around the Indigenous history and culture of the region. The research she did as a member of the curatorial team between 1999 and 2004 for the inaugural exhibitions at the National Museum of the American Indian in Washington, D.C., centered on issues of identity, human rights and sovereignty in Indigenous communities in the United States and Latin America. This would be the foundation for projects McKinnon would take on during the next 15 years.

In Guatemala, for example, McKinnon curated a traveling exhibition and visual archive about the massacre of hundreds of men, women and children from Maya Achí communities who were killed by paramilitary and government forces in the early 1980s. Documented accounts of the incident related the killings to a dispute between the Guatemalan government and families who were forcibly displaced from their ancestral lands to make way for construction of a dam.

“I generally didn’t leave my house after dark,” recalled McKinnon. “A lot of the people that I worked with had death threats all the time.”

By the end 2012, McKinnon had left Guatemala and founded a humanitarian nonprofit called Curators Without Borders. After developing programs about topics such as Indigenous peoples’ migrations from Central America to the United States for small museums and organizations, McKinnon then served as a museum consultant and curated the inaugural exhibits of the Museum of Freedom and Human Rights in Panama City.

But all the while McKinnon was still thinking about opening a store to celebrate artisans. Finally, after she spent most of 2020 developing the ideas for the store with an early partner, Heritage by Hand opened in December of that year. Undeterred by the pandemic that quickly ensued, she called on her contacts in Mexico and Latin America to contribute their works. McKinnon thought supporting these communities and selling their art pieces was more necessary than ever.

“I don’t think we have enough handmade pieces in our lives,” McKinnon said. “Instead of staring at your screen, you stare at a beautiful pot that you purchased or, you know, this textile that you’re wearing. It just helps maintain those kinds of connections with the world around us and humanity.”

To create awareness of the threats to Indigenous cultural traditions, McKinnon developed a risk classification system guided by the International Union for Conservation of Nature’s Red List of Threatened Species to protect, maintain and share cultural heritage. The threat levels, which range from thriving to lost, are on each tag on the items sold in her shop.

“We need to be as concerned about the loss of cultural heritage in the same way that we are concerned about our environment,” McKinnon said. “These things are equivalent and they are tied to one another in some cases.”

Whenever possible, she also encourages artisans to feature in their works images, shapes or sustainable materials from their local environments, such as handbags made from “cactus leather” or “upcycled” cotton jewelry from Mexico. “At least you can say, ‘this is the ecosystem from where these pieces come.’ I think it’s important to get the whole picture.”

During the past two years, McKinnon has supported artisans and those who represent them, which has helped keep their businesses and ancestral techniques alive even in the face of overwhelming challenges. For example, Amalia Gué represents Ixbalamke, a group of Q’eqchi’ weavers in the community of Samac in the central highlands of Guatemala. These weavers are renowned for the “pikb’il,” or gauzelike textiles, they create. Gué said McKinnon was instrumental in helping them introduce their pieces at the International Folk Art Market (IFAM) in Santa Fe in 2010.

Then two major hurricanes hit her community in November 2020, severely damaging the village. McKinnon and a friend launched a fundraising effort that helped the weavers replace their looms, purchase cotton thread and get metal roofing to rebuild their homes, said Gué (as translated through her daughter). She said these contributions allowed them to get back on their feet and produce pieces for the 2021 IFAM.

Arturo Álvarez Jiménez founded Casa de la Cruz, a project that promotes the work of weavers, potters and other artisans from the state of Veracruz in Mexico. He said he was sold on working with McKinnon because “she’s someone who greatly values the work that the artisans do, as well as the efforts of those of us who are at the reins of projects like these.”

“We recognize that what she does is something significant, because she doesn’t only work with us,” said Gué. “What we do is an art. It’s a significant artform that our ancestors have left us. And nowadays, we cannot lose it. In fact, we need to keep giving it life.”