It began in 1975 as a dream to prove that Polynesians had settled the Island Pacific – crossing an ocean covering one third of our planet – through intentional voyaging, a thousand years before Europeans knew the Pacific Ocean existed. Intended as Hawaii’s contribution to the 1976 U.S. Bicentennial, Hōkūle‘a was built as a replica of the vessels used by Polynesians, using illustrations made by European explorers of the canoes they encountered in the 18th century. 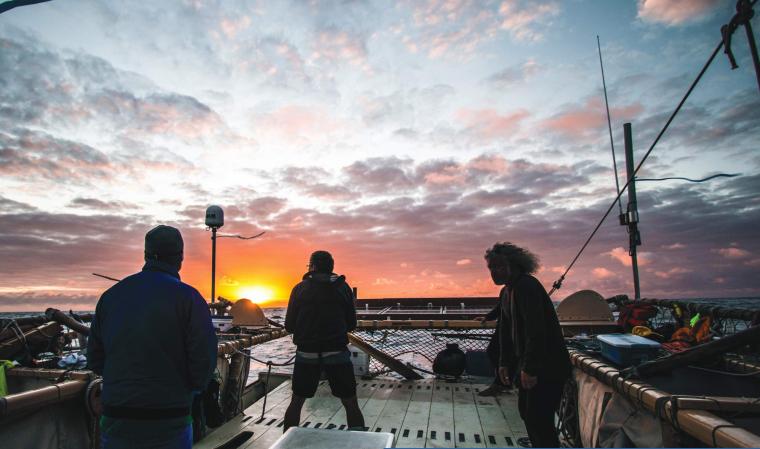 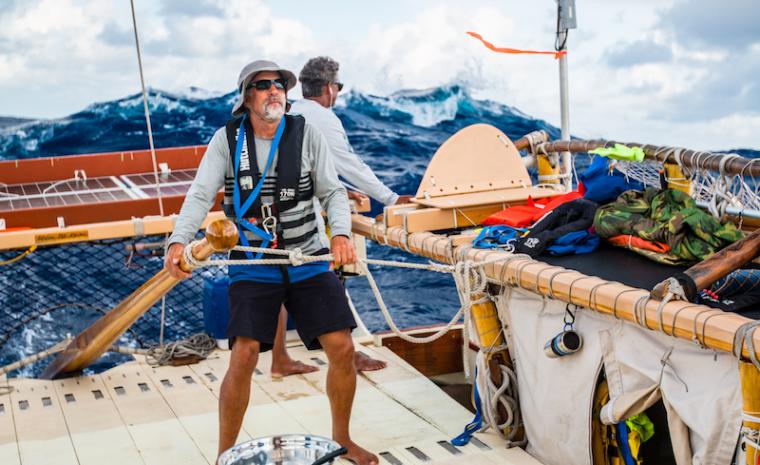 The canoe itself was built of modern materials: her hulls are fiber-glassed marine plywood because the art of carving such canoes from live wood has vanished – along with the ancient canoe-makers, the kahuna kālai wa‘a, and the koa trees large enough to make such a craft. The sails are made of Dacron; the lashing is nylon rope. She was a “performance replica,” designed to perform like an ancient vessel and intended for one historic voyage: to sail to Tahiti using traditional navigation.

“We wanted to test the theory that such canoes could have carried Polynesian navigators on long voyages of exploration throughout the Polynesian triangle,” says navigator Nainoa Thompson. “We wanted to see how she sailed into the wind, off the wind, how much cargo she could carry, how she stood up to storms. Could we navigate her without instruments? Could we endure the rigors of long voyages ourselves? Frankly, that was enough of a challenge. It didn't matter if the canoe was made of modern materials as long as she performed like an ancient vessel.”

In 1976, Hōkūle‘a proved her mettle by sailing 2,400 miles across empty ocean to Tahiti, guided by traditional Micronesian navigator Pius “Mau” Piailug. Her voyage spurred not just the revival of voyaging and ancient techniques of navigation but also an astonishing renaissance of indigenous culture in Hawaii and throughout the Pacific. Since 1975, Hōkūle‘a has sailed 150,000 miles, following the routes taken by intrepid Polynesian explorers, navigated always as they would have done – without instruments or charts – by relying instead on signs in the stars, waves and the flight of birds. In May 2016, Hōkūle‘a will arrive on the East Coast of the United States on one of the final legs of a voyage around the world to “mālama honua,” care for Planet Earth.

The voyage still relies on traditional navigation, but it can also call on modern technology. According to Nā‘ālehu Anthony, co-chair of the ‘Ohana Wa‘a (“canoe family”), even though the Hōkūle‘a is traveling in different longitudes, the latitudes are much the same: tropical. And the stars in the tropics are the same around the globe. “The skills test for our traditional navigators is from leaving the sight of land to the sighting of the next land. The worldwide voyage is taking us to islands, coastlines and waters we have never seen, so once you sight that target, having traveled hundreds or thousands of miles, you turn on a chart plotter so that you know depth, where the harbor entrances are and so forth. There are all kinds of things to consider when you are coming to a dock. You need these modern pieces of equipment when you are trying to navigate these very precarious entrances and you’re a vessel under tow without any power. And that’s not part of the navigational test.”

The idea for a worldwide voyage emerged around 2000. The planning began in earnest around 2008, after six years of discussion with the Hawaiian community. Jenna Ishii, education coordinator for the Polynesian Voyaging Society and assistant to Hōkūle‘a navigator Thompson, says that, “Some community members questioned whether we should take Hōkūle‘a outside of the Pacific, because she’s our iconic symbol of cultural revival and pride. What if something happened to her? It’s dangerous, it’s risky. What impact will we really have? Is this going to just be a great adventure or are we truly going inspire change to protect our Island Earth?”

There is a Hawaiian proverb: “He wa‘a he moku, he moku he wa‘a” (“The canoe is an island, the island is a canoe”). “Learning to live well on islands is a microcosm of learning to live well everywhere,” says Thompson. “In Hawaii we are surrounded by the world’s largest ocean, but Earth itself is also a kind of island, surrounded by an ocean of space. In the end, every single one of us – no matter what our ethnic background or nationality – is native to this planet. As the Native community of Earth we should all ensure that the next century is the century of pono – of balance – between all people, all living things and the resources of our planet.”

“The key to way-finding is to employ all these values,” says Chad Kālepa Baybayan, another of Hōkūle‘a’s navigators. “You are talking about running a vessel, getting everybody on board to support the intent of the voyage and getting everybody to work together. So it’s all there: vision, planning, training, discipline and aloha for others. After a while, if you apply all those values, it becomes a way of life.”

In the last decade or so, the philosophy of way-finding has been “moving ashore” so to speak. New words have entered the way-finding vocabulary, “stewardship” for example, or “sustainable environments.” Lessons learned at sea are now being applied to the land. The ancient philosophy of way-finding is now merging with the new world view of environmentalism, as Baybayan says: “To be a way-finder, you need certain skills – a strong background in ocean sciences, oceanography, meteorology, environmental sciences – so that you have a strong grounding in how the environment works. When you voyage, you become much more attuned to nature. You begin to see the canoe as nothing more than a tiny island surrounded by the sea. We have everything aboard the canoe that we need to survive as long as we marshal those resources well. We have learned to do that. Now we have to look at our islands, and eventually the planet, in the same way. We need to learn to be good stewards.”

“It goes back to what Nainoa says about building a network of people around the planet who are going to change it for the better,” says Anthony. “That is absolutely one of the things that we are doing. We are finding stories that align with the values that we have back at home; we are meeting people that are engaged in similar activities to care for the earth, and hopefully we are bringing them all together to have a global conversation about how we can cause positive change for the planet.”

Engagement with indigenous peoples is a consistent – but not exclusive – part of the voyage. “We do find a lot of indigenous connections and family in all of the places that we go,” says Anthony, “but there are also a wide range of others who rely on the sea for education, for food, for their livelihood. I think that there are a lot of people that are concerned with what they find and don’t find in the spaces that they have come to learn really well. And that concerns them enough to say ‘Hey, we need to make positive change, because this won’t be around for our kids and grandkids.’”

“Naturally, when we enter a port, we seek out the traditional keepers of the land,” adds Jenna, “and a common response we have found in industrialized nations we have visited is, ‘Well, they don’t live here anymore.’ When we came to Sydney, Australia, one of our cultural leaders said ‘Where are your First People?’ and eventually went into the inner city of Sydney to find them. But they were so honored that we sought them out, because a lot of these communities have been pushed off the coastal land. Hawaiians have had 40 years of cultural revival, and in some of these places, this revival is just beginning.”

South Africa proved to be a turning point for the voyage: “We were halfway around the world, and we had no idea what the response would be,” Jenna recalls. “Would they treat us like strangers, like family? We’re so foreign to these people. Archbishop Desmond Tutu came to the arrival ceremony, and his daughter spoke. They brought us in and said ‘Welcome home’ and we knew we were truly coming to the origin of humanity that we all share. And when our kids from Hawaii danced with the kids in Cape Town, it was about celebrating humanity – one people, one earth – and that was such a beautiful moment. At the end of that trip Nainoa said, ‘I really do think it was a voyage of making a difference, and this is what peace looks like.’”

The visit to the East Coast is particularly powerful for the crew. “Many Hawaiians do not live in Hawaii any more,” Ishii explains. “They live in and across the United States. Some of them might’ve grown up on the East Coast, never lived in Hawaii, and this is a touch back to their ancestry. We’ve never felt such an outpouring of aloha. There are so many people who know us, who want us to come. We don’t have to explain what we do, they just get it, and so the East Coast is going to be like a homecoming.

“The second point is to reconnect with the First Peoples of the area. We say to our various planning committees in different potential ports up and down the East Coast, ‘Please connect us with the First Peoples. Who are they?’ and they share or make those connections and do the research, helping us to understand how to be respectful in approaching a community. So it’s an awakening to the people who live there about the Native origins, the lineage. There are these traditional keepers of the lands, and we should honor them.

“Then when we get to D.C. and New York, where it’s such a global, national arena, to truly bring the message of why we need to protect our oceans and Island Earth. I think the message amplification is going to be bigger than we’ve ever imagined. We have been refining and strengthening our message as we go, and when we get to D.C. and New York, we think the ripple effect of all that powerful message to Mālama Honua, added to the messages and good work that people are doing all over the world, will inspire greater action in everyone, from us everyday people to world leaders.”

Sam Low is a film maker, anthropologist and a Hōkūle‘a crew member. He is the author of the award-winning book, Hawaiki Rising – Hōkūle‘a’, Nainoa Thompson and the Hawaiian Renaissance. www.samlow.com

Douglas Herman, Senior Geographer at the National Museum of the American Indian - Smithsonian, specializes in the cultural knowledge of Hawaii and Pacific Islands and is a member of the Polynesian Voyaging Society. In 2013 he built his own outrigger canoe and has blogged about building it (http://blog.nmai.si.edu/main/hawaii/).