Athena LaTocha: The Presence of Monumentality 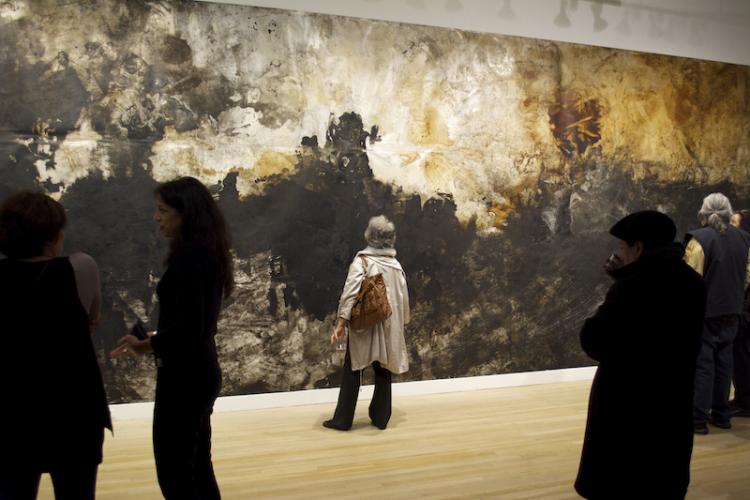 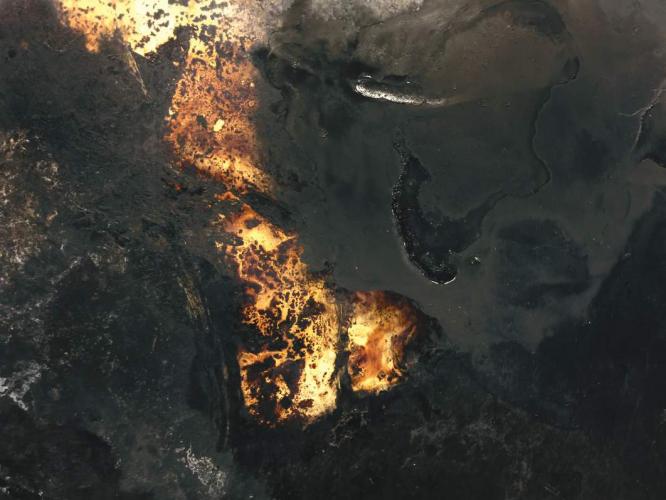 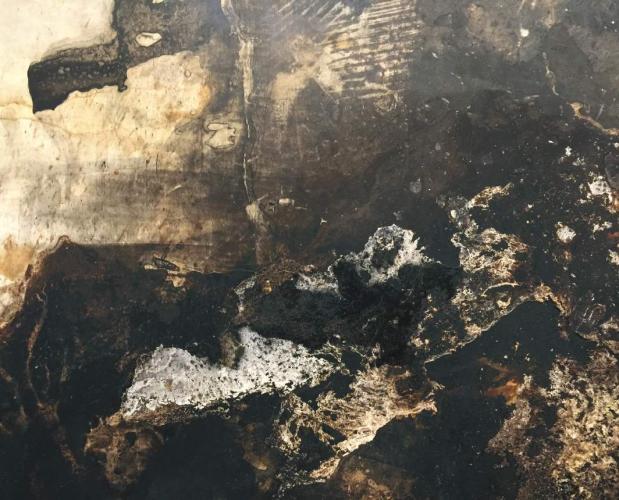 LaTocha’s art tools include rocks, bricks and automobile tire shreds, which can be seen in the detail of her painting for CUE. Photo courtesy of CUE Art Foundation

LaTocha’s art tools include rocks, bricks and automobile tire shreds, which can be seen in the detail of her painting for CUE. Photo courtesy of CUE Art Foundation

She was raised in Anchorage, and during her last trip home, spent one-and-a-half weeks on the road, driving across the lowlands, highlands and forests and hiking up mountains along treacherous paths to sketch the valley floor below. The peril and wonder were overwhelming. “It was poignant,” she says, “the experience of being in the presence of monumentality.”

This monumental vision emerged in her solo exhibition at the CUE Art Foundation in New York City earlier this year, in a painting 10 feet in height and nearly 38 feet long. The untitled work stretched the entire length of the gallery. LaTocha constructed it section by section with her unique brushless style, using sumi and walnut inks on photo paper. She had not seen the entire piece until the installation.

LaTocha eschewed working with brushes years ago. Instead her art tools include found objects such as rocks, bricks and automobile tire shreds. Her monumental work is highly textural; some areas are thickly covered in ink, and others reveal the paper underneath. Along the surface are scratches, splatters and pools of dried ink.

Placing her canvases on the floor, she walks around them and on top of them. “Working aerially with my images on the floor, I am interested in being inside the image rather than the outside as an easel painter,” she says. She selects 10-foot sections and considers whether to start in the middle or along the edges. She takes 15-pound tire shreds three feet long and drags and lifts them. The scraping and slapping of the rubber on paper makes loud noises in her studio. “The steel radial from the tire shred literally cuts and bites through the medium and into the support,” she says, “while it conceptually cuts into the metaphorical landscapes.”After she pulls and pushes the sumi and walnut inks on the medium, she has to wait for the inks to dry, a period she describes as “quiet torment.” LaTocha has learned to trust the power of intuition and the work. She does not force the work but lets it go. She sits quietly with the work. “It is coming to be,” she says. “If you put yourself into the work completely,it gives back to you.”

The effect is dynamic and hypnotic. One person likened the work to a haboob, Arabic for an intense dust storm. Others have described it as a landscape with peaks, crags and valleys.Indeed it is both sky and earth; LaTocha allows her work to be open for interpretation.

LaTocha graduated with her BFA from theSchool of the Art Institute of Chicago and received her MFA from Stony Brook University in New York in 2007. She then apprenticed in bronze at the Beacon Fine Art Foundry in Beacon, N.Y., and took printmaking classes at the Art Students League of New York.

The years after graduation were a time of artistic growth. Earlier, she made narrative and figurative works, but they “felt forced,” she says.“They were very constrained and static. It felt similar to putting on something that didn’t fit.”Her canvases left the wall, and she worked on the floor. She stopped using brushes, feeling that they distanced her from the work.

After 2004, she shifted to landscapes as her principal genre. This was the “greatest revelation,”she says, “a way to learn about the world around you as you learn through your life experiences.” In her art courses, she had learned how “Western art” regards landscape as something a person looks upon. There is distance between the viewer and the land, as if viewing the scene through a window. Instead, she began to think about Australian aboriginal artist Lin Onus (Yorta Yorta, 1948–1996) and his perceptions of land. “In the aboriginal sense,” she says,“one is actively moving through the landscape. Humans are part of the landscape, not separate from it.” These insights freed her to make art that was part of her instead of what others expected of her.

LaTocha feels privileged to have grown up in Alaska. “It is really recharging to experience that environment, the raw landscape,” she explains. “Alaska is the way I reconnect with powerful forces. I feel the strength and power of the environment. In my work, I try to convey that atmosphere. The time I spend on the land draws me forward.”

In her last trip home, she also visited Prudhoe Bay in the Alaskan North Slope. She observed oil refineries on the water with their towering plumes of smoke rising in the air. But in spite of the prevalence of machinery, she also watched caribou walking across the oil fields. “I look at how humans are shaping the earth,” says LaTocha. “Human power versus nature’s power. Both are incredible forces, but nature’s always going to win.”

The CUE Art Foundation presented LaTocha’s latest work as part of a new program in which an established artist curates a solo exhibition. Jaune Quick-to-See Smith, a New Mexico-based artist with more than 110 solo exhibitions spanning 40 years, acted as curator and selected LaTocha. Smith is enrolled Salish of the Confederated Salish and Kootenai Tribes of the Flathead Nation in Montana. CUE is an arts center established in 2003 to provide resources and career opportunities for emerging artists.

Smith came across LaTocha’s work in 2010, at the In/Sight 2010 exhibition at the Chelsea Art Museum in New York City. “Her sense of storm and stress continues to haunt me,” Smith says. When she saw the monumental piece for CUE, Smith declared, “I was blown away by her incredible painting; she went over the top.”