The Art of Capturing Horses

Capturing a prize horse from an enemy was the dream of every aspiring Plains Indian warrior. Young men risked their lives to sneak into an enemy village and leave riding a splendid war horse that had been tethered next to its owner’s tipi. The successful horse thief had every right to boast about his exploit for the rest of his life and, lest anyone forget, he might depict it in a pictograph drawing on his tipi cover, he might wear beaded vests or shirts featuring the horse he had captured, or he might carve a wooden effigy that he would hold as he danced in an honor ceremony or participated in other important community events. 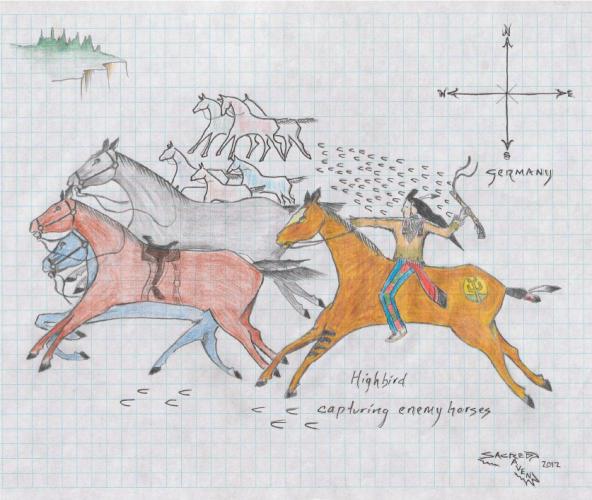 Raiding an enemy’s horses is a tradition that survived even into 20th-century warfare. As a group of German officers was retreating near the end of World War II, Highbird (Joe Medicine Crow) and his platoon followed them. When the officers camped for the night, Highbird captured 50 of their horses.

Raiding an enemy’s horses is a tradition that survived even into 20th-century warfare. As a group of German officers was retreating near the end of World War II, Highbird (Joe Medicine Crow) and his platoon followed them. When the officers camped for the night, Highbird captured 50 of their horses.

These traditions have survived even into the 21st century. Nowhere is this more evident than on the Crow Reservation in southeastern Montana, the home of the Crow Indians, a people who still cherish their horses and their warrior tradition – as I learned from my adopted brother, Dr. Joseph Medicine Crow. Medicine Crow, who has an honorary doctorate from the University of Montana, grew up listening to the stories of his grandfather White Man Runs Him and the other aged veterans of the Indian wars. Thanks to World War II, he got the chance to capture his own horse in the finest tradition of a Plains Indian warrior.

It was near the end of the war, and the Germans were retreating on all fronts. As Medicine Crow recalls, one night his platoon was following a group of S.S. officers on horseback who had abandoned their men and were just trying to get away. Since they were riding their horses on an asphalt road, the U.S. soldiers could hear the clop, clop of the hooves ahead of them. Near daybreak, the horsemen went to a farm about three miles down a dirt road, where they planned to hide during the day. “We followed their trail in the moonlight and arrived at a villa. We came there and found a little pasture with a barn.”

“I said, ‘Maybe I should get those horses out of the corral before you attack because some of those S.S. guys might be able to escape on them. It would only take me about five minutes.’ The C.O. looked at me funny for a second, but he probably had an idea of what I was up to. I was the only Indian in the outfit, and he always called me ‘Chief.’ He said, ‘O.K. Chief, you’re on.’ That’s all I needed. I took one of my buddies and we sneaked down towards the corral and the barn. Nothing was moving. The horses were tired, just standing around. I crawled through the paddock fence and came up to one of them. I told him, ‘Whoa. Whoa.’ He snorted a little bit, but settled down. I had this little rope with me that I used to tie my blanket. It was about six feet long. I tied a loop around his lower jaw like the old-time Crow warriors used to do, and then I tried to get on, but it was a tall horse, and my boots were so muddy and caked up, I couldn’t do it. Finally, I led the horse to the watering trough and stood on that to get on its back.

Meanwhile, I told my buddy that I was going to the other end of the paddock behind the horses. ‘As soon as I get there,’ I said, ‘I will give a little whistle, and when I do you open the gate and get out of the way.’ Well, I got back there, gave the whistle, then a war whoop, and started the horses moving. The kid took off and here they come.

Just about that time our boys opened fire on the farmhouse. There was lots of commotion. I just took off. There was some timber about half mile away, so I just headed that way. By that time it was daylight, so as we galloped along I looked at the horses. I had about forty or fifty head. I was riding a sorrel with a blaze, a real nice horse. So I did something spontaneously. I sang a Crow praise song. I sang this song a little bit, and rode around the horses. The horses looked at me. Finally, I left them in the woods, but I stayed on my horse and headed back to the farmhouse. The firing had stopped by now. The Germans had surrendered real quick. So I came back

After we finished mopping up, the company commander said, ‘Let’s go,’ and we took off. There was a gravel railroad bed nearby, which made the walking a little better. As the guys took off down the railroad track, I was still on my horse. It was good, better to ride than walk, so I just stayed on the horse about a mile. Finally, the C.O. said, ‘Chief you better get off. You make too good a target.’ When I got back to the Crow Reservation after the war, the elders gave me credit for that coup just like it was done in the old days.”

Such exploits continue to fire the imaginations of later generations of Crow soldiers. Carson Walks Over Ice, Medicine Crow’s nephew, fought in Vietnam as a Green Beret. His goal, too, was to count coup on the enemy and he did so many times, but to his regret he never got a horse. “I did get two elephants, and that should have counted for something,” he says, “but the elders did not see it my way.”

Dr. Viola’s essay is reprinted from A Song for the Horse Nation: Horses in Native American Cultures. To learn more about the book and exhibition, visit www.AmericanIndian. si.edu.

Dr. Herman Viola serves as senior advisor for the Museum’s National Native American Veterans Memorial Project, is curator emeritus at the Smithsonian’s National Museum of Natural History and is a member of the Citizens Coinage Advisory Committee.