When I met glass artist Preston Singletary (Tlingit) in a sunny Seattle hot shop, he was making an oystercatcher rattle. On a nearby table, a museum catalogue was open to a page featuring an antique, wood-carved shaman’s rattle that served as Singletary’s starting point. As he transformed black glass into a modern iteration of the historic rattle, I noticed that his communication with the material was remarkably intuitive, dare I say shamanistic.

An elegant beak is attached to the oystercatcher’s elongated neck. Photo by Mary Savig

An elegant beak is attached to the oystercatcher’s elongated neck. Photo by Mary Savig 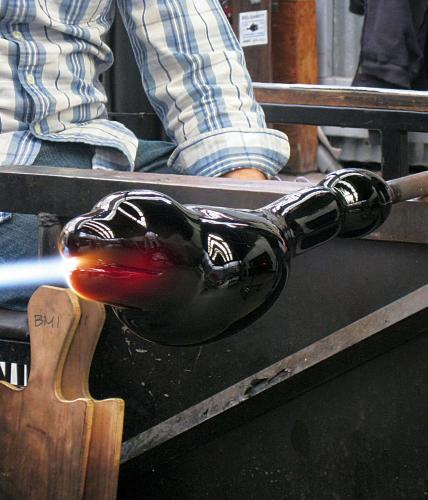 Heat is applied directly to a section on which Singletary is working. Photo by Mary Savig

Heat is applied directly to a section on which Singletary is working. Photo by Mary Savig 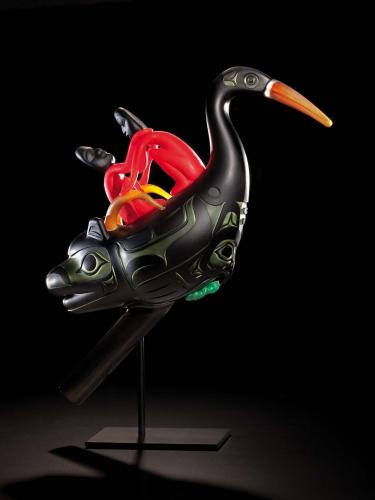 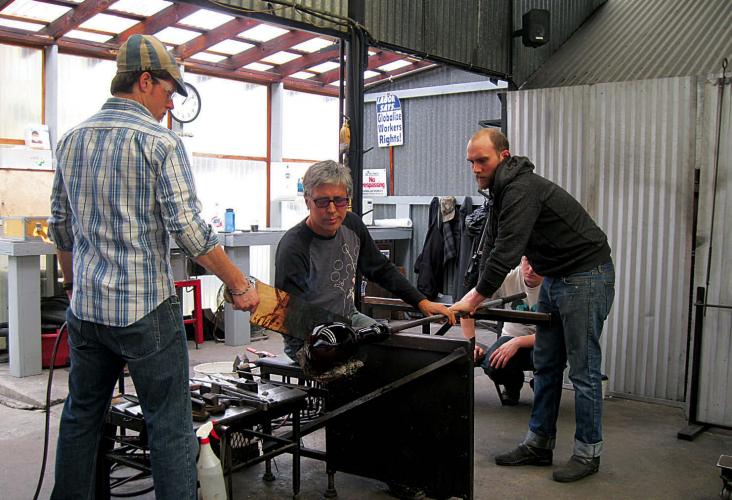 Singletary with his assistants forming the glass. Photo by Mary Savig

Singletary with his assistants forming the glass. Photo by Mary Savig 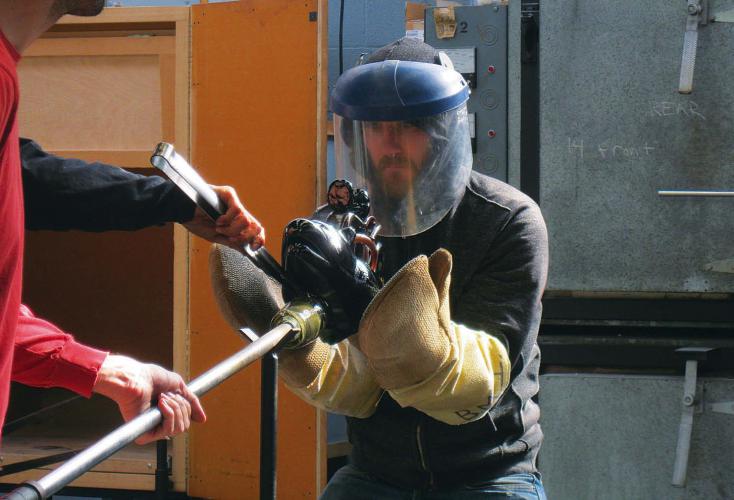 The hot rattle is removed from the blow pipe. Photo by Mary Savig

The hot rattle is removed from the blow pipe. Photo by Mary Savig

Singletary and his assistants spoke very little, only to cue one another to blow air into the glass or to begin warming an attachment. Their work was rhythmic: the rattle would travel fluidly between the furnace and the workbench. Even the motions of Singletary’s hands as he shaped the glass seemed to be tuned to an inner beat. The afternoon passed by in what seemed like a handful of minutes. Before I knew it, Singletary and his team had completed a luminous rattle.

I traveled to Seattle in March, 2011 to interview Singletary as part of the Nanette L. Laitman Documentation Project for Craft and Decorative Arts in America, an oral history project managed by the Smithsonian’s Archives of American Art. Since 2000, this initiative has produced more than 200 interviews of prominent artists working in clay, fiber, metal, wood and, of course, glass. The time was ideal to interview Singletary because he had just finished working on his mid-career retrospective exhibition, Preston Singletary: Echoes, Fire and Shadows, which originated at the Museum of Glass, in Tacoma, Wash., in 2009 and traveled nationally to venues including the George Gustav Heye Center in New York.

Even though Singletary’s career has been well documented by curators and art critics, the goal of the interview was to capture his life history in his own words. As our conversations proceeded, it became clear that nuanced details of his life cannot be neatly sorted into subjects and periods. Rather, elements of his work and process often collide or even clash, specifi cally, his interest in both modern art and Alaskan Tlingit culture. On several occasions, Singletary spoke about the way he uses glass to navigate and make sense of these artistic traditions.

Singletary’s attraction to modernism began early in his career, when he started blowing glass in the flourishing Seattle glass scene in the 1980s. While taking workshops at Pilchuck Glass School, about 45 miles north of Seattle, he watched and learned from technically sophisticated demonstrations given by Italian glass luminaries such as Lino Tagliapietra and Pino Signoretto, as well as by American innovators Dale Chihuly and Benjamin Moore. These were the facilitators of the American studio glass movement who had their roots planted in Italy, specifically Murano, the Venetian enclave of glass. Singletary describes the dominant style as the “modernist movement of the decorative arts,” characterized by abstracted forms and streamlined designs achieved with age-old processes.

Venetian modernism both inspired and frustrated Singletary, who was also trying to achieve a modern aesthetic but one imbued with his personality. He had learned the most sophisticated techniques from the masters, but not how to make the glass affective. He lamented, “I realized at some point that I wasn’t going to make a name for myself making vases and bowls.”

Compelled to learn more about his Tlingit heritage, Singletary turned to his relatives for information. His great-grandmother, Susie Johnson Gubatayo, was full-blooded Tlingit. Gubatayo is the surname of her second husband, a Filipino immigrant. During the 1920s, they lived in Seattle, where Tlingit traditions were slowly being dismantled even as the Filipino community flourished. Inspired by her new Filipino family members, Gubatayo took it upon herself to organize the Tlingit community in Seattle. Singletary explains that his great-grandmother faced an uphill battle; the federal government and local churches had been attempting for decades to weaken native communities by banning their languages and breaking up their families and land. Her resilience struck a chord with Singletary, and he began dabbling with Tlingit motifs and concepts alongside his pursuits in modernism.

Trying to convey the spiritual fiber of Tlingit art with a modern aesthetic was a balancing act. Singletary describes his approach: “The things I did in the beginning were more about trying to replicate traditional objects. Today if you look at the spoons and you look at the headdresses and the kinds of things that I try to do, I like to go in that direction, but then I also like to be more abstracted with it in a sort of non-traditional way,” he says.

The non-traditional road down which Singletary was drawn was the “modernist primitive” movement. As governmental and religious forces sought to stymie native culture, a legion of European and American artists affi liated with the modernist movement embraced so-called primitive art. Beginning in the late 19th century, artists charged that industrialism and mass consumption alienated and corrupted society. Troubled by the seemingly decadent status quo of modern society, artists such as Pablo Picasso and Emile Nolde called for a clean slate. Singletary aptly summarized their position; modern artists, he said, “always talked about unlearning the whole confines of the educated mind.”

To Singletary, modernist primitive art was an extension of the Venetian modernism in which he was already steeped. But these artists paid particular attention to indigenous art. Always a voracious reader, Singletary studied books on those modernists who fervently expressed their high regard for Northwest Coast art among other so-called primitive cultures across the world. He recalls how the books instigated more questions: “I was fascinated, [it] led me to the primitivism movement which was modern artists referencing primitive art.”

He also came across the catalogue for the 1984 Museum of Modern Art exhibition, “Primitivism” in 20th Century Art: Affinity of the Tribal and the Modern, edited by William Rubin. The exhibition and catalog immediately became a lightning rod for criticism. The controversy underscored the fraught relationship between indigenous art and modernism. Many critics of the exhibit argued that any affinities between modern and so-called “primitive” art were lopsided: primitive art has evolved on its own terms throughout history while modern art could not exist without the primitive. In other words, primitive art was a whetstone on which modernist artists could hone their own aesthetics.

These complications and contradictions have not been ignored by Singletary. When I asked him about his thoughts on modernist artists appropriating art from “primitive” cultures, he referred to a section in the book Tonto’s Revenge (1997) by legal scholar Rennard Strickland (Osage/Cherokee) that grabbed his attention.

“Strickland talked about how it’s ironic that the moderns forced us to appreciate native art, or to look at the primitive and appreciate different levels of reality. Native artists have often been excluded from the modernist movement; their work wasn’t deemed modern,” says Singletary.

Native artists had been excluded during the peak of modernism in the 1920s and ’30s, but Singletary intimated that the time for exclusion has passed. He allows space for his work to be both Tlingit and modern. “One of the things that I always like to say is that I hope that my work can be appreciated in other ways, not just associated with ethnic art; but at the same time, it’s what gives it its power because it has that connection.”

Singletary says that European-introduced materials and tools such as glass trade beads, coins, mother-of-pearl buttons and miscellaneous curios showed the adaptive capacities of Tlingit people. He relates this to his art. “We all know what happened – the island of Manhattan was traded for trade beads. I mean, I’ve read this in documents where they say there was such fascination with the material and the color that it was thought as something very rare and something really special and colors that they didn’t have access to… I think of glass as kind of an extension of that connection to the material.”

Singletary views his exploration of modernism as well as his innovative use of glass to create Tlingit-inspired artworks as an extension of his heritage. His ability to elide many perspectives into one work is part of his effort to be included in an ever evolving lineage in the history of art, one that draws on the past and that he hopes will influence future glass and native artists. “As people say, there’s nothing new under the sun. I mean, there are people who did it before me, and I like to think of my work as evolutionary material and that maybe it will provide some inspiration for the next generation to do something in their own way and present the culture, play with the symbolism and the iconography and maybe do something new with it in their own way.

“I try to honor the past, the culture that I am connected to and also make something new of it. I think it works…. You will see other artists that are starting to work with new materials. It could be concrete. It could be steel. It could be, you know, glass. It could be anything, but to keep the stories and the symbolism alive and moving into the future.”

Like many artists, Singletary continues to focus on the process rather than the outcome. Elements of glass traditions, modernism and native culture are all elements in his everchanging alchemy.

The interview excerpts have been edited and shortened for this article. The complete interview transcript is available on the Archive’s website at www.aaa.si.edu.