Jim Thorpe, the legendary Olympic champion and all-around professional athlete, was awakened from a deep sleep by a ringing phone at two o’clock one morning during the summer of 1938. Cecelia Blanchard (Kickapoo), co-founder with Thorpe of the Indian Center in Los Angeles, was on the line with an urgent request. Could he drive over to the Center immediately and help her save a woman and her two children who were huddled on the doorstep and appeared to be near death? They looked to be starving, and their clothing consisted of a couple of torn flour sacks. 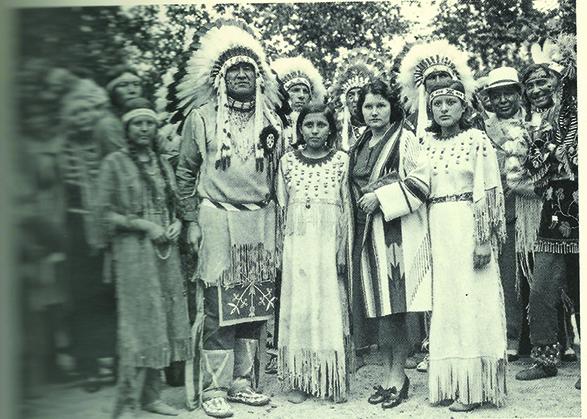 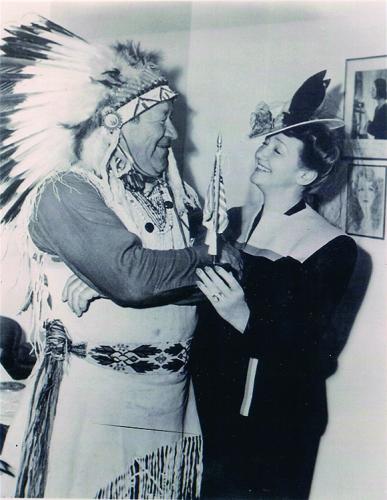 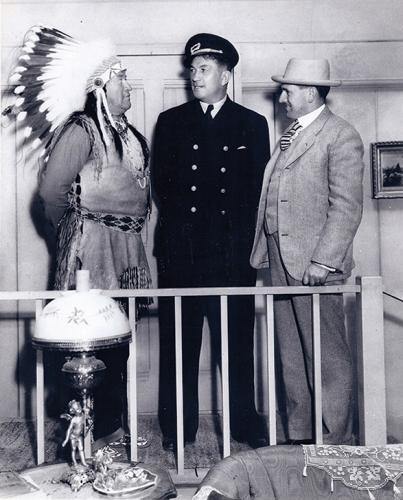 Thorpe with Victor McLaglen on the set of Klondike Annie, in 1935. Mae West was the star and screenwriter.

Thorpe with Victor McLaglen on the set of Klondike Annie, in 1935. Mae West was the star and screenwriter. 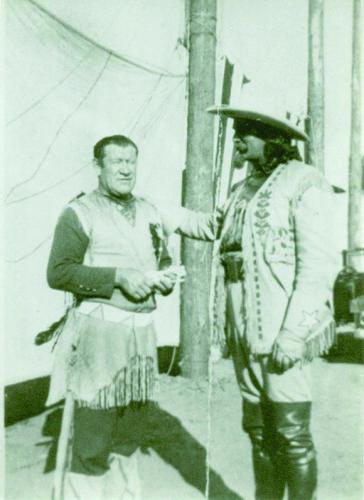 Thorpe in the movie Battling with Buffalo Bill. Made in 1931, it was his first movie role. Tom Tyler played Buffalo Bill.

Thorpe in the movie Battling with Buffalo Bill. Made in 1931, it was his first movie role. Tom Tyler played Buffalo Bill. 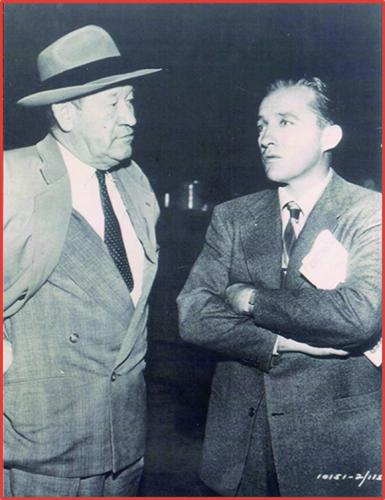 Thorpe got dressed, jumped into his black 1931 Model A Ford and drove the 11 miles from his home on 3904 104th Street in Inglewood to the Center on 7th Street. Upon his arrival outside of the brown clapboard, converted house, in a scene reminiscent of his athletic days, the now 50-year-old Thorpe sprinted up the 100 steps to the open front door and knelt down to reassure the woman, “Don’t worry. We will get you some food and medicine right away.” He handed Blanchard some money to cover the expense, and the two of them carried the little family down to his car for the drive to the hospital.

Blanchard invited them to spend the remainder of the night at her home where they enjoyed a bath, one of her home-cooked meals and a warm bed. By daylight, Thorpe had collected enough money for clothing and a stay at a motel. A few days later, Blanchard found them a place to live and someone to help with the children, while Thorpe secured employment for the mother in the production office of the MGM film Northwest Passage.

While known to the world as its supreme all-around athlete, Thorpe was now in the middle of a new career that left a powerful, though largely forgotten, legacy. It earned him the title Akapamata, in his Sac and Fox heritage, the word for “caregiver.”

After an unprecedented athletic career, including gold medals in the pentathlon and decathlon at the 1912 Stockholm Olympics, Thorpe retired to a life of fighting tirelessly for Indian rights, especially in the motion picture industry.

There was no obstacle in the world of sports that he had not been able to overcome, but, in the midst of the Great Depression, he was thrust into the maelstrom of modern earning and spending. He traveled to Hollywood, where he sold the rights to his life story to MGM. “He stayed in Tinseltown,” wrote Kate Buford in Native American Son: The Life and Sporting Legend of Jim Thorpe, “where being an Indian added to his athletic fame and gave him a competitive edge he couldn’t get anywhere else.” Universal Studios was the first to hire him, casting him as Chief Black Crow in Battling with Buffalo Bill in 1931. Soon, MGM hired him for a baseball film. Later came a football picture with his old coach, Glenn Scobie “Pop” Warner.

As the motion picture industry began to rise from the depths of the financial collapse of the 30s, Thorpe was in demand. His roles began to increase in significance and, with his determination and leadership acumen, he recruited Indians from across the nation for movie work. His experience as co-founder and first president of the National Football League in 1920 prepared him for his successful attempt to organize and launch the Indian Center. After many brainstorming sessions with Blanchard, the two submitted a grant proposal to the Bureau of Indian Affairs that was accepted.

“So they had the Indian Center,” said Paulette Blanchard (Absentee Shawnee), Cecelia’s great-granddaughter, in a recent interview with American Indian magazine, “and Native peoples from all over the United States and Alaska streamed into their ‘home away from home.’ Jim and my great-grandmother were the ‘Welcome Wagon.’”

Thorpe’s son, Richard, now 81 and living in Waurika, Okla., and Paulette, currently a graduate student at the University of Oklahoma’s College of Atmospheric and Geographic Sciences, readily say that the rescue at the Indian Center was repeated countless times. They recalled this lesser-known period of Thorpe’s life in an exclusive interview with American Indian late last year.

“In those days,” Richard Thorpe recalled, “Dad was always helping others financially or by finding them work in the movies. He never uttered a bad word about anyone. He was a very warm person. Many times he would take me with him, and I got to see the look of compassion on my father’s face and the looks of gratitude and the tears of thanksgiving on the faces of the people he helped...especially the children. I was very proud of him and loved him very much! Plus, he let me ride in the rumble seat of his Model A.”

Paulette Blanchard recounted the support Thorpe offered to her great-grandparents Cecelia and Lee. “They left their little town in Oklahoma with the Depression in full swing. He helped them get on their feet and get jobs in the movies. They adored and admired Jim for his selflessness, his tenacity, his drive to help others find work, his resolve to make lives better in Indian country and to enable tribal communities to determine their own destiny in whatever way he could.”

Thorpe’s new career included not only earning a living for his family, but also assisting others. When he wasn’t on location for a movie shoot, many Fridays would find him with Cecelia, and her husband Lee, poring over the lists of Indians seeking employment and matching them with upcoming casting calls and auditions. (The Blanchards, in addition to their acting skills, quickly established a reputation as the top authentic Indian costume designers in town).

The following morning would invariably find the indefatigable Thorpe, along with a number of his buddies, hunting rabbits and birds for a feast that evening. In Paulette’s words, “The families would gather on Saturday nights on the outskirts of town – Natives were not welcomed in the city – and have a potluck and fellowship around a ‘dinner fire.’ The men would clean the game right there, and the women would do the cooking over the fire in a traditional manner. My great grandmother’s specialty was a wonderful corn soup!”

After dinner, Thorpe would counsel the prospective job seekers while Blanchard would hand each person a sheet of paper she had prepared with individualized instructions for a specific employment interview. Their creation of the Indian Center and their innumerable dinner fires not only provided hot meals and camaraderie during a time devoid of adequate welfare or food ministries, but also gave birth to the Native American Actors Guild, which, at the time, was denied membership in the Screen Actors Guild.

“The industry was racist,” Paulette stressed. “They were portraying a vanishing people and a dying culture, and they were portraying it over and over again. That wore on the Natives’ psyche. That wore on their hearts. We are a proud people. We have worked hard to survive. Jim realized this and knew he had the best agency to create change. He tried to offer them an opportunity to be more than society was telling them they were going to be, which was ‘poor Indians.’”

He was the leader among Native people in Hollywood. He had the biggest name, the most connections, and when he wasn’t lobbying with movie moguls, he used his fame to give speeches across the country to tribal, government and civic leaders, and schools and universities on behalf of Indian advocacy or simply to educate people on Native issues.

Paulette remembered her great-grandmother using the word “caregiver” to define Thorpe’s relationship with his Indian brothers and sisters. Cecelia would always comment on his “big heart” and “selflessness” and the many times she saw him “take money from his own pocket or give a coat off his own back” to help somebody in need. Regarding equality, Cecelia would emphatically declare: “He went to his grave fighting for equal pay for Native actors and decent health insurance, especially for the stuntmen!”

“Jim’s valiant effort laid the early groundwork for the benefits enjoyed today by indigenous people in the industry,” Paulette concluded, “where we are still trying to crack the glass ceiling of film and media and taking back control of who we are as a people.”

Bob Wheeler is the author of Jim Thorpe: World’s Greatest Athlete. He and Dr. Ridlon founded the Jim Thorpe Foundation in 1982.

Florence Ridlon, PhD, is the author of several books, most recent of which is A Black Physician’s Struggle for Civil Rights: Edward C. Mazique.

Rob Wheeler, their son, is a Massachusetts Institute of Technology graduate working on his doctorate in Aerospace Engineering at Texas A&M University. In 2011, he created a website, JimThorpeRestInPeace.com, whose mission is the restoration of Thorpe’s remains to Sac and Fox land in Oklahoma.