Mexico’s Día de los Muertos (Day of the Dead) celebration held on November 1 and 2 to honor the departed would not be complete without the xoloitzcuintli. Often present at the celebration, this small dog has a big role in the afterlife. According to Mexica (Aztec) stories, most humans would have to travel through eight levels of the underworld before arriving at the last level, where they would find their final resting place. This four-year, perilous journey was full of challenges, including the crossing of the unswimmable Apanohuacalhuia River. Each xoloitzcuintli would wait at the river’s shore for its master’s call to help ferry him or her on its back across the dangerous waters. There are many variations of this story, but they all include the help of a dog. 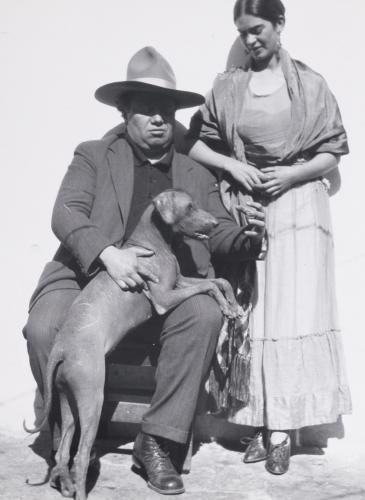 Mexican artists Diego Rivera (left, with dog) and Frida Kahlo helped revive the xoloitzcuintli breed. Although the dogs are typically seen with upright ears, large xolos sometimes have floppy ones, so this may be one of the couples’ many xolos.

Mexican artists Diego Rivera (left, with dog) and Frida Kahlo helped revive the xoloitzcuintli breed. Although the dogs are typically seen with upright ears, large xolos sometimes have floppy ones, so this may be one of the couples’ many xolos. 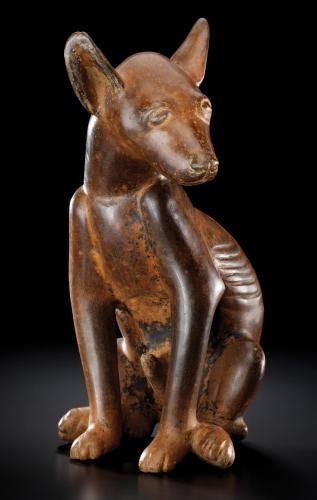 Typical of the items buried in Mexica (Aztec) “shaft” (vertical) tombs, this figurine in NMAI’s collection reflects the smaller xolo’s characteristic features. However, this one is portrayed with ribs showing through its hairless skin.

Typical of the items buried in Mexica (Aztec) “shaft” (vertical) tombs, this figurine in NMAI’s collection reflects the smaller xolo’s characteristic features. However, this one is portrayed with ribs showing through its hairless skin.

Humans have an undeniable bond with their dogs. This has been evident in Mesoamerica since before Spanish colonial contact in the early 1500s—particularly with the “xoloitzcuintli” (pronounced show-low-eats-queen-tlee). The name of this breed is certainly a mouthful, and given this and that many of these dogs are mostly without fur, it is no wonder that many English speakers simply call this breed the “Mexican hairless.” That name, however, does not reflect its significance in Mesoamerican history and cultures.

The breed’s Nahuatl name—which is in the language of the Nahua peoples, including the Aztec—comes from the name of the god who created him, Xolotl, and the Nahuatl word for dog, “itzquintli.” Xolotl ruled over the sunset, lightning and death. According to creation stories, humans and xoloitzcuintlis were formed from the same Bone of Life. Xolos were a gift to humans to guard them in life and guide them in the afterlife.

Today, these dogs are routinely called “xolos” (pronounced cholos). They are among the oldest domesticated dog breeds; remains of one dog found at an archaeological site reportedly were dated to about 5,500 years ago. Bred to be small (less than 14 inches tall), miniature (14 to 18 inches tall) or standard (18 to 23 inches) in size, the dogs can be “hairless” or coated. Both varieties can be found in a single or multiple colors, including black, dark gray, brown and red. Perhaps the most charming characteristic of the so-called hairless variety is the tuft of hair commonly found on its head, feet and tail.

We know of the xolo’s various roles in early Mesoamerica from archeological finds and the chronicles by Europeans such as Bernardino de Sahagún, the first ethnographer in Mexico. Pottery depicting dogs exhibiting various behaviors has been found at archeological sites in western Mexico. Dog remains located at burial sites are believed to be a guarantee the owner’s dog would accompany them into the afterlife. It is not surprising that dog remains interred sometime between A.D. 1325 and 1521 were found at Templo Mayor (“main temple”) in Mexico City, the symbolic center of the Aztec Empire known as Tenochtitlán. Xolo dogs were connected to Mesoamerican daily life and cosmologies. On the earthly plane, they guarded people and their homes. They helped hunt turkey and deer. Since their body temperature runs high, they were used as hot-water bottles to treat various illnesses. They were also consumed on special occasions. In addition to their earth-bound functions, they were considered sacred and to have mystical powers able to ward off evil spirits.

Despite their importance in Mesoamerican life, this breed was on the verge of extinction due to the importation of European varieties and Spanish consumption. New dogs from Europe replaced local varieties, and interbreeding resulted in the genetic loss of xolo characteristics. The Spanish also acquired a taste for their readily available meat. During the 1950s, the breed’s popularity was mainly in Mexico’s art and celebrity circles. During this time, dog enthusiasts joined together to rescue the breed. They were able to identify 10 surviving xolos in remote Mexico locations. From these few dogs, the breed was reinvigorated. Famed Mexican artist Diego Rivera helped rescue the breed by starting the first breeding kennel in 1925. He and his wife, artist Frida Kahlo, kept xolos and often incorporated them into their artwork. The xoloitzcuintli is now recognized in the Canófila Federación Mexicana (Mexican Canofile Federation) and the American Kennel Club.

The recognition and expansion of Mexico’s most emblematic tradition, the Day of the Dead, has also boosted the breed’s popularity. This tradition of receiving and honoring departed loved ones as practiced by Indigenous peoples was recognized by the United Nations Educational, Scientific and Cultural Organization (UNESCO) and inscribed in the organization’s Representative List of the Intangible Cultural Heritage of Humanity. Since the 1980s, the tradition has grown from a local home and community expression to a nationwide cultural event. Xolo owners throughout the country now attend these events with their dogs. They paint them like skeletons, drape them in “cempasúchil” (the Aztec marigold traditionally associated with the Day of the Dead) and even dress them in glorious Aztec regalia.

Xolos are now well known beyond the dog world. “Coco,” the Pixar Animated Studios film released by Walt Disney Pictures in 2017, presented xolos to an international audience. The story is about Miguel, a young boy who gets unexpectedly drawn into the afterlife on the Day of the Dead. He is accompanied by Dante, a goofy street xolo. Dante helps Miguel achieve his mission in the land of the dead and accompanies him back to the land of the living.

A Tijuana-based soccer club is named the Xolos. Elaborate tattoos of xolos entwined with pre-Columbian designs can be seen on the Internet. You can even find piñatas in the shape of xolos. The breed also has had renewed prominence in the art world. In 2019, the Museo de El Carmen in Mexico City presented an exhibition entitled “Xolos, compañeros de viaje” (“Xolos, Travel Companions”).

Today, the xoloitzcuintli breed has regained its revered place in Mesoamerican history and culture. It is recognized as Mexico’s national dog, and in 2020 was named a symbol of Mexico City.

Yet perhaps the most compelling testimonies about the enduring appeal of the breed come from xolo enthusiasts, such as Diana Cardona and Mariana Olmos of El Paso, Texas, and Ciudad Juárez, across the border in Mexico. Cardona characterized her dog, Silverio, as “lovable, active, and just plain goofy.” Before obtaining her dog, she researched the xolo breed and learned about its cultural importance and Indigenous legacies. Both are glad to hear about the breed’s growing popularity, and Olmos described the xolo’s role as a “cultural diplomat.” Cardona has seen chalk murals of Frida Kahlo with xolos in Florence, Italy, and live xolos in Amsterdam in the Netherlands. The xolo owners eloquently sum up the breed’s role as simply being “heritage.”

Cynthia L. Vidaurri is a folklorist at the National Museum of the American Indian. She has researched Mexico and Day of the Dead for about 30 years.