Apologies are Not Enough

One morning in 1975, when I was 5-years-old, I was playing alongside my four younger siblings on the wooden floor of the living room in our home in Sioux Valley Dakota Nation in southwestern Manitoba. My two older sisters were in the kitchen, charged with babysitting us until our mother came home from a visit with a relative. Our mother had only been gone for a short time when my older sisters suddenly appeared at the doorway and shouted “Run and hide. Quick! Or they’re going to take us!” 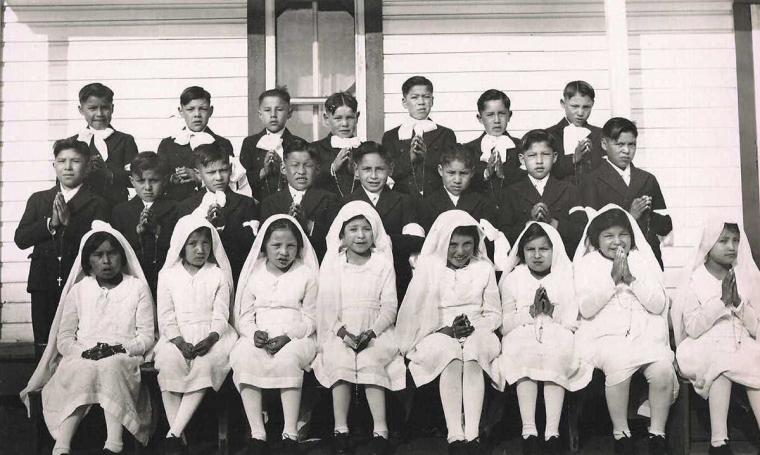 Indigenous students at the Ermineskin Indian Residential School in central Alberta, circa 1940–1950.0

Indigenous students at the Ermineskin Indian Residential School in central Alberta, circa 1940–1950.0 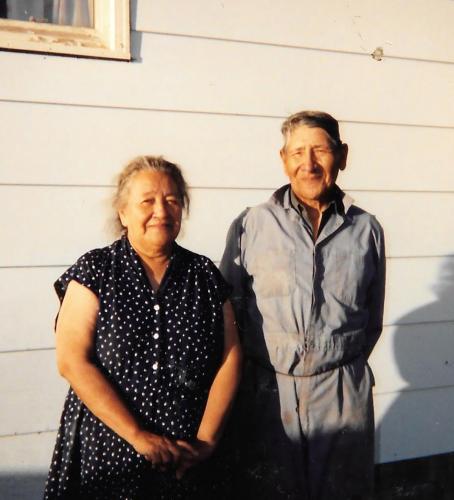 All of us stampeded out of the living room. I ran into the kitchen and peered through the narrow opening between the curtains. I saw a green vehicle parked in the dirt driveway. I immediately recognized the man and woman who were climbing out of the car: these social workers had entered our home once before to talk to our mother. They had leaned against the kitchen wall and counter as I pressed against my mother’s legs while she sat at our table. I couldn’t understand what they were saying, but their words had upset her.

The noise of panicked voices and running footsteps broke through my thoughts, and I turned and ran down the hallway. The locked kitchen door was broken open and slammed against the wall. These sounds along with our screams as we were stolen from my mother and my home continue to haunt me.

Social workers broke into our home and others with the mindset that they were protecting children from problems Indigenous families faced, such as poverty, unemployment and addiction. Parents were given little to no warning about the removal of their children. Rather than being offered social services, however, my siblings and I were among the 20,000 Indigenous children in Canada whom government social workers took from their families and put into foster homes and orphanages from the late 1950s until the mid-1980s. Canadian researcher Patrick Johnston coined the term “Sixties Scoop” for this mass removal of Indigenous children in his 1983 Canadian Council on Social Development report “Native Children and the Child Welfare System.”

However, the act of removing Indigenous children from their families in Canada in order to assimilate them into colonial society had begun decades before this. The Indian Act of 1876 forbade Native peoples from practicing independent governance and expressing their various cultures in order to assimilate them into colonial society. To fulfill the aim of this act, in the 1870s then-Prime Minister Alexander MacKenzie directed lawyer and politician Nicholas Davin to come up with a plan for “educating the Indians.” He studied and followed the U.S. boarding school concept of “aggressive civilization” by creating government Indian residential boarding schools. In 1883, Secretary of State for the Provinces Sir Hector Langevin told Canada’s Parliament: “In order to educate the children properly, we must separate them from their families. Some people may say this is hard, but if we want to civilize them, we must do that.”

Eventually, 139 residential boarding schools were built across Canada, and more than 150,000 students were forced to attend them. School administrators stripped the children of their long hair and Native clothing, dressed them in colonial attire and refused to allow them to maintain any of their cultural practices, including speaking their Native languages. These schools tore apart the fragile seams of family structure, communities and the children’s birthright to their own culture and heritage.

Canada’s 1951 amendment to Section 88 of the Indian Act of 1876 extended the power of the Canadian government over Indigenous people and enabled provincial child welfare authorities to access Indigenous reserve lands and remove children from their families. In Manitoba, as many as 55 percent of these Indigenous children were adopted by non-Indigenous, U.S. families.

After protests erupted by the alarming number of Indigenous children being taken, the Child, Family and Community Services Act was passed in 1980, requiring that band councils be notified ahead of removal of an Indigenous child from the community. In March 1982, the Associate Chief Judge Edwin Kimelman led an inquiry into the Indigenous child welfare system and found that in 93 adoption cases, no attempt had been made to place any of the Indigenous children into Indigenous homes. He wrote, “cultural genocide has taken place in a systematic and routine manner.”

Many of the adopted First Nations, Inuit and Métis children were consequently raised without any knowledge of their culture and heritage. This forced assimilation into non-Indigenous communities created self-esteem issues and psychological trauma, with many experiencing mental, physical and sexual abuse at the hands of their caretakers.

In May 2006, the Canadian government and church organizations signed the Indian Residential School Agreement. It is the largest class-action suit in Canadian history, with nine courts issuing payments between 2006 and 2007. The Canadian government paid $4.7 billion and the Protestant Church paid $9.2 million to all eligible former students. The Catholic Church, however, which had initially promised to pay $29 million, paid only $1.2 million. They cited fundraising issues. In 2013, the Catholic church was challenged in court by the federal government over their argument to include legal and administrative fees as part of the settlement. The judge sided with the Catholic Church, agreeing that the $1.2 million it had paid out to survivors covered the remaining amount.

This past July, as Pope Francis apologized for the atrocities committed at Canadian residential boarding schools during his “penitential pilgrimage,” I thought of my grandparents Margaret and Albert Elk, who were residential boarding school survivors. After listening to the translation of his apology, I was left waiting for further action. Yet nothing else happened. Apparently, survivors are expected to graciously accept this simple apology and expect nothing more. For me, that’s not enough.

Along with the payment, criminal charges need to be brought against the church authorities who abused children and the church needs to make a public denouncement against the perpetrators for their offences. To right the wrongs of the past, leaders of religious organizations as well as governments need to be held responsible and accountable. And meaningful engagement with individuals, families and communities needs to occur before future policies and programs are implemented. As a Sixties Scoop survivor, I will continue to give insight into the detrimental effects that the forced removal of Indigenous children has had on generations of individuals, families, communities and society.

That morning in 1975 when I was taken from my home was the last time that I would spend with my family until I was in my early 20s. Throughout my childhood, I was sent to two foster homes and a children’s home before being adopted by two separate families. I wouldn’t hear my actual mother’s voice until 14 years after I was taken from her. As I pressed the phone receiver next to my ear, I recognized my mother’s voice calling me by my childhood name, “Barbie.” A torrent of hot tears sprung from my eyes, and we both cried.

Barbara Bad Elk (Hehacha Sicha of the Sioux Valley Dakota Nation) is a Dakota and Sixties Scoop writer and speaker based in Washington, D.C.