An Indelible Stamp of Culture

This past July, the U.S. Postal Service (USPS) issued the “Raven Story” stamp at a ceremony the Sealaska Heritage Institute hosted in Juneau, Alaska. USPS Art Director Antonio Alcalá designed the stamp based on art by Tlingit and Athabascan visual artist Rico Worl. 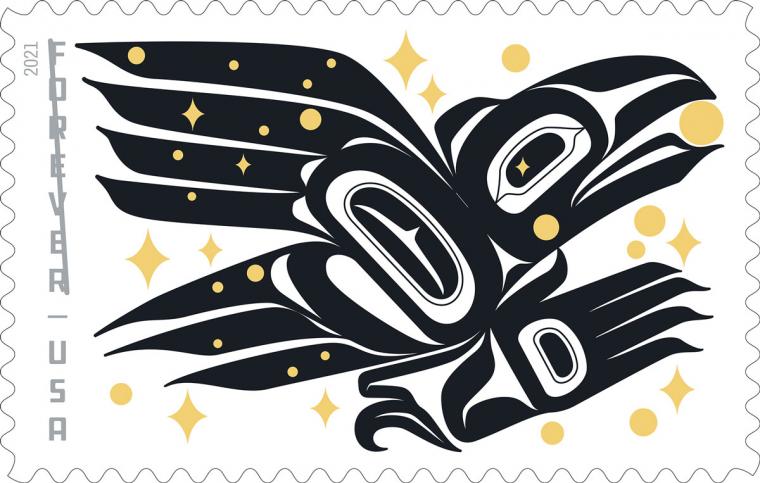 Courtesy of the U.S. Postal Service

Courtesy of the U.S. Postal Service

Alcalá was captivated by Worl’s work when he saw one of his basketballs in a gift shop in the National Museum of the American Indian in Washington, D.C., three years earlier. The ball, which was covered in the round black ovals and faces that are integral to North Pacific Coast formline design, is just one of many contemporary objects that Worl and his sister, Crystal Worl, use to express their style and culture. As “social designers,” Rico Worl said they “make art obtainable” to many and encourage people to buy authentic Native pieces. They sell items ranging from prints and jewelry to playing cards and stickers through their Trickster Company, a name inspired by the raven.

The raven is central to creation and other stories in many cultures from the North Pacific Coast region, including the Tlingit in Alaska. Although the tales vary, in them Raven is often a trickster. The stamp portrays a version of the story in which Raven cajoles a clan chief to give him the leader’s coveted boxes that contain the stars, moon and sun. Raven releases the precious sources of light, bringing the world out of darkness.

To maintain balance in the Tlingit world, clans belong to one of two groups called moieties. At the ceremony in Juneau, Tlingit actor Frank Henry Kaash Katasse of the Tsaagweidí clan told a version of the raven’s story. Members of the Shangukeidí clan from the Eagle moiety spoke about the importance of the piece. Rico Worl then joined members of his Lukaax.ádi clan, who are part of the Raven moiety, to “dance the stamp in.” In Tlingit tradition, this act legitimizes the artwork as an authentic, living object.

Rico Worl wanted to tell the Raven’s story with the stamp because he saw it as a national opportunity to teach those who buy it about Indigenous peoples and inspire them to learn more. He said, “I felt it was important to have a gateway piece into the Tlingit culture.”