On May 31, 2022, Dwight Birdwell received a call he never imagined getting. President Joe Biden phoned him to inform him that he was going to receive the U.S. military’s highest award, the Medal of Honor, for his brave stand against enemy forces during the Vietnam War. Just a few weeks later, Biden would be placing the medal around his neck at a ceremony at the White House. Birdwell reflected, “I was standing upon that stage, and as he was putting that medal around my neck I thought, ‘Boy this is a long way from the strawberry patch where I grew up.’ It was a really overwhelming experience.” 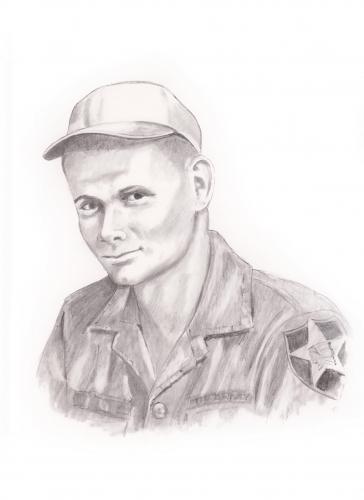 This drawing, adapted from a photo of Dwight Birdwell in Vietnam, hangs in the Oklahoma Military Hall of Fame, to which he was inducted in 2017.

Illustration by Mac Crank for the Oklahoma Military Hall of Fame

This drawing, adapted from a photo of Dwight Birdwell in Vietnam, hangs in the Oklahoma Military Hall of Fame, to which he was inducted in 2017.

Illustration by Mac Crank for the Oklahoma Military Hall of Fame 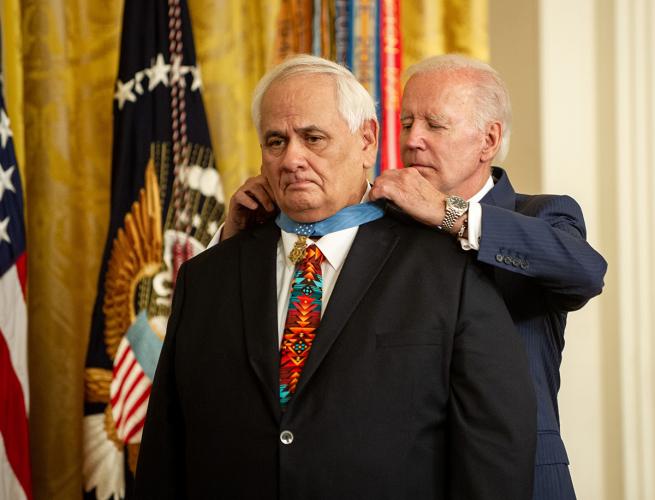 On July 5, 2022, President Joe Biden presented Specialist Five Dwight Birdwell with the Medal of Honor, awarded more than 50 years after his heroic actions in the Vietnam War.

On July 5, 2022, President Joe Biden presented Specialist Five Dwight Birdwell with the Medal of Honor, awarded more than 50 years after his heroic actions in the Vietnam War.

Dwight Wayne Birdwell was born January 19, 1948, in Amarillo, Texas, but spent most of his youth in the Cherokee community of Bell in Adair County, Oklahoma. Inspired by a fellow Cherokee classmate and veteran, Birdwell enlisted in the U.S. Army at age 18 and reported for basic training just a week after graduating from Stilwell High School on May 24, 1966. In Vietnam, he was an armored tank crewman assigned to Troop C, 3rd Squadron, 4th Cavalry, 25th Infantry Division.

On January 31, 1968, about 85,000 North Vietnamese fighters poured into South Vietnam. The nine-month campaign that followed—dubbed the Tet Offensive as it was launched on Tet, Vietnam’s lunar New Year holiday— was one of the deadliest of the Vietnam War, with tens of thousands of losses on both sides.

That morning, two platoons of Birdwell’s Troop C rushed to repel an attack by Viet Cong on Tan Son Nhut Air Base near the city of Saigon. This was the first American ground unit from outside the air base to respond to the attack. As their column of tanks and armored cavalry assault vehicles approached, about a hundred U.S. soldiers drove directly into and split an enemy force of nearly a thousand men. They came under intense enemy fire from both sides of the road, crippling the lead tank and other vehicles and blocking the column from advancing. Several of the troop’s leaders, including Birdwell’s tank commander Ron Breeden, were killed or wounded. Under fire, Birdwell lowered Breeden to the ground and found a safe place for his commander; Breeden survived. Then, Birdwell took command of the tank. Standing exposed in the hatch, Birdwell aimed the tank’s machine guns at oncoming forces. When the main gun was exhausted, he continued with the .50-caliber machine gun until it overheated. He then engaged the enemy with his M16 rifle, often continuing to expose himself to enemy fire.

When a helicopter crashed nearby, Birdwell dismounted and ran to retrieve two M60 machine guns and ammunition from the downed aircraft. After giving one to a fellow soldier, he climbed back into the tank and reengaged the enemy with the other M60. Birdwell continued firing until his weapon was hit by enemy fire, wounding him in the face, neck, chest and arms. He dismounted the tank but refused medical evacuation. Still under enemy fire, Birdwell rallied his fellow soldiers to the front of the armored column, where they established a defensive position near a large tree and continued engaging the enemy with M16 fire and grenades. As the enemy fire decreased, Birdwell gathered ammunition from disabled vehicles and helped move wounded soldiers to safer positions. His determined leadership under fire inspired others to continue fighting and directly contributed to the defeat of the larger enemy force. The airport suffered minor damage.

When Birdwell was finally placed in a Huey helicopter to be medevacked, he rolled out the other side to return to battle. Forced onto a Chinook aircraft by two officers, he was treated at the 12th Evacuation Hospital. While doctors discussed possible treatment, he promptly left to return to his unit. Birdwell attributed his action to a combination of training, adrenaline, an anticipated promotion and “not wanting to disappoint” Lieutenant Colonel Glenn Otis, who was flying in a heavily armed helicopter that was shot down four times during the fight. As Birdwell explained, “Nothing short of death was going to stop me.”

After the battle at Tan Son Nhut, Lieutenant Colonel Otis recommended then-Specialist Five Birdwell for the Medal of Honor, but instead he was awarded the military’s third-highest honor designated for U.S. Armed Forces personnel, a Silver Star. Taught never to seek glory for himself, Birdwell did not pursue the issue. Birdwell earned a second Silver Star on July 4, 1968, risking his life twice to rescue several troops who were wounded and stranded in a battle zone. He also received two Purple Hearts for wounds he received in combat.

Despite his many close calls, Birdwell survived the war and returned to Oklahoma in late December 1968. He graduated with distinction from Northeastern State University in Tahlequah, Oklahoma, in 1972 and the University of Oklahoma School of Law with honors in 1976. He has practiced law in Oklahoma City ever since. Birdwell served as a member of the Cherokee Nation’s Judicial Appeals Tribunal (now called the Supreme Court) from 1987 to 1999 and as chief justice from 1995 to 1996 and 1998 to 1999. He co-authored “One Hundred Miles of Bad Road: An Armored Cavalryman in Vietnam 1967-1968” with military historian Keith W. Nolan in 1997, and was inducted into the Oklahoma Military Hall of Fame in 2017. He and his wife Virginia have two children, Stephanie Birdwell and Edward Birdwell.

The Congressional Medal of Honor Society says the Medal of Honor is “awarded to members of the armed forces who distinguish themselves conspicuously by gallantry and intrepidity at the risk of their own lives above and beyond the call of duty,” including an engagement in an action against an enemy of the United States. First awarded in 1863, the medal is presented by the president of the United States in the name of the U.S. Congress. Normally petitions are required to be submitted within three years and medals awarded within five years of the action. However recent legislation extended the medal’s statute of limitations.

On July 5, 2022, more than 50 years after their honored service, Birdwell and three other Vietnam veterans were finally awarded their Medal of Honor. While reading Birdwell’s citation recognizing his valor, President Biden stated, “When he was ordered to load onto a medevac helicopter, he complied—and this I find amazing—only to crawl right back off the other side and keep on fighting. That’s what you call taking orders and then causing trouble. God love you.”

Of the more than 3,500 Medals of Honor awarded, 35 now have been bestowed upon Native Americans and Native Hawaiians. In the Cherokee Phoenix newspaper this past July, Cherokee Nation Principal Chief Chuck Hoskin Jr. stated, “We are tremendously proud of Dwight Birdwell, as a fellow Cherokee. He represents thousands of Cherokees over the generations who have proudly served our country to protect our freedoms.”

Acknowledging that the award brought ”lots of smiles and joy through our hearts” for him and his family, Birdwell gives the credit to his unit. “This Medal of Honor is really for the unit that I served with at Tan Son Nhut, for the guys who were there. It’s an affirmation of what they did, what we did. We saved Tan Son Nhut Air Base from the North Vietnamese,” he said. “It’s not about me. It’s about the unit, the 3-4 Cav.”

William C. Meadows is a professor of Anthropology and Native American Studies at Missouri State University.