Indigenous people across North America depend on Native media outlets for essential information about their communities and tribal affairs. These newspapers, newsletters, magazines, radio and television broadcasts as well as online publications are often produced in places that otherwise lack a reliable source of timely, accurate and contextual coverage of what impacts their daily lives. Indigenous media, however, does more than distribute news. It serves as a community forum that can help reinforce cultural values and languages. Ultimately, it holds the potential to reaffirm an Indigenous community’s identity. 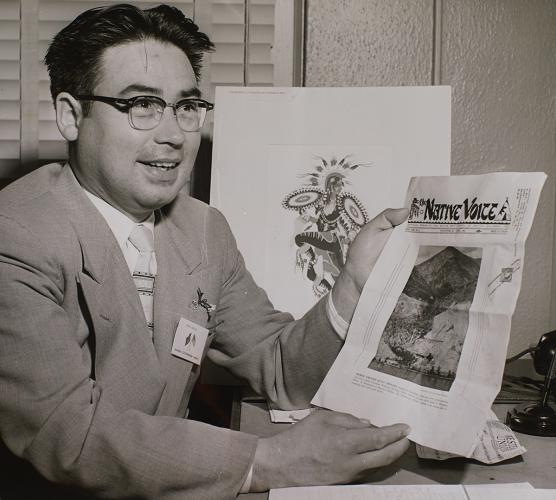 President of the Anchorage Camp of the Alaska Native Brotherhood Miles Brandon holds up a 1954 edition of the Native Voice, a publication produced by the Native Brotherhood of British Columbia. The organizations were established to fight to preserve Native civil rights. National Congress of American Indians Collection, NMAI 010_PHT_013_002

President of the Anchorage Camp of the Alaska Native Brotherhood Miles Brandon holds up a 1954 edition of the Native Voice, a publication produced by the Native Brotherhood of British Columbia. The organizations were established to fight to preserve Native civil rights. National Congress of American Indians Collection, NMAI 010_PHT_013_002 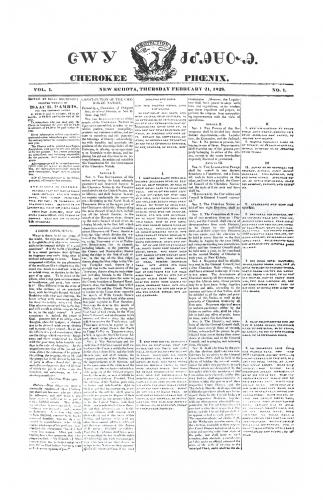 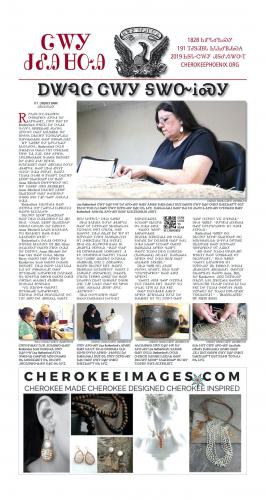 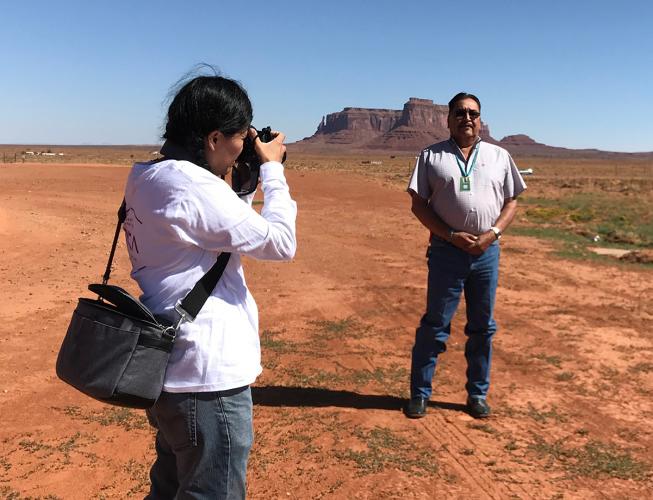 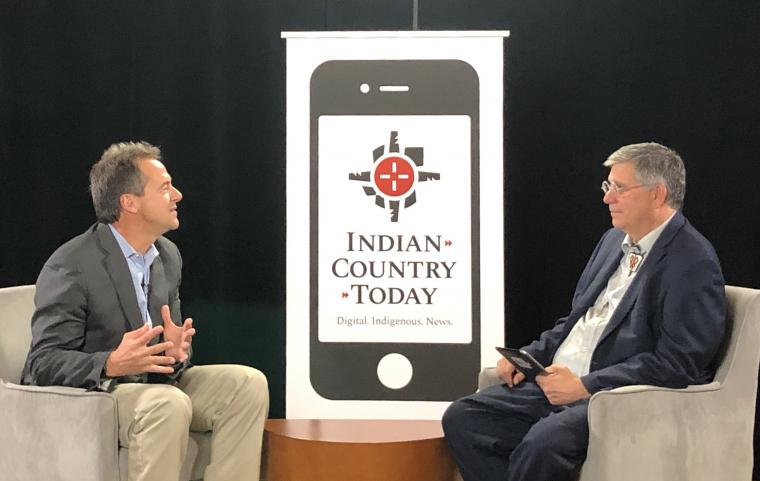 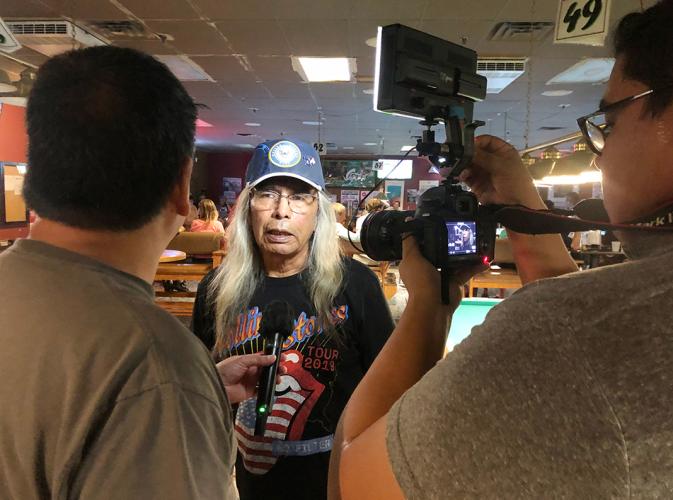 The Native American Journalists Association (NAJA) estimates about 400 Indigenous news outlets—including print, digital and broadcast— operate throughout the United States and Canada. Their followers range from a few hundred readers or listeners to millions of online and television viewers.

Loris Taylor is president and CEO of Native Public Media, a nonprofit organization that supports Indigenous broadcasting. A citizen of the Hopi Nation, Taylor says that modern technology enables media to amplify the time-honored Native tradition of bringing people together: “The plaza is a very distinct space within the Hopi community, where ceremonies take place, where the community gathers for anything that is significant.” She says that tribal radio “is a drum within that space that transmits to the current generation and to future generations the value of our history, of our language, of our oral traditions.”

For Native media professionals, deeply ingrained cultural values are often foundational to journalism. Francine Compton, a citizen of Sandy Bay Ojibway First Nation, is an executive producer at the Aboriginal Peoples Television Network (APTN) based in Winnipeg, Canada, and a NAJA board member. She says that what she learned growing up in her culture guides her work: “The seven teachings are love, respect, courage, honesty, wisdom, humility and truth. That guides me as someone who grew up with my culture, and it guides me in my job. It’s journalism—it’s a passion to find the truth.”

NAJA conducted a survey in 2019 among nearly 500 Indigenous media producers and consumers as part of its Red Press Initiative to gain a better understanding of the values of and challenges to Indigenous media. When asked if their Indigenous media reinforced cultural values, more than half of all those surveyed responded “most of the time,” while nearly 95 percent responded at least “some of the time.”

Some media outlets reinforced their Indigenous culture by publishing or broadcasting in their Native language. Nearly 10 percent of those the Red Press Initiative surveyed responded they did so most of the time and 80 percent responded, at least sometimes.

The first Native newspaper in North America was the weekly Cherokee Phoenix, which the Cherokee Nation first published in both English and Cherokee on February 21, 1828. Since 2018, the newspaper has published a special annual edition in the Cherokee language that features a QR code that, when scanned by a smartphone, reads the issue in Cherokee.

APTN broadcasts National Hockey League games in the Plains Cree language. “When it comes to languages, absolutely media has a role to play in educating and preserving,” Compton says. “That’s something that is giving back to the community,” she says.

Native radio broadcasts began to bloom in the United States and Canada in the 1970s, and continue to be an important source of news, especially to those in rural areas. Nearly 70 Indigenous radio programs broadcast today.

Jodi Rave Spotted Bear, a citizen of the Mandan, Hidatsa and Arikara Nation in central North Dakota, founded the Indigenous Media Freedom Alliance and its blog, Buffalo’s Fire. She advocates for more robust Indigenous news sources because she says mainstream reporting is insufficient. “We’re really not on their radar,” she says. “We had tribal elections about a year or so ago and it was an important election for a new chairman of our tribe. I called the Bismarck Tribune and talked to an editor there and asked if they were going to do any news reporting of our election, and they said no because they didn’t have a reporter in the area anymore.”

Compton has felt the harm inflicted by the invisibility of Indigenous stories in mainstream media, even stories worthy of national attention. In 2000, when she first started working at the APTN television station, she covered a little-known story about the Canadian military removing sun dancers from their dancing grounds on unceded territory that had become a farmer’s ranch. “I come from a sun dancing family. I couldn’t believe that the Canadian government sent the military in to remove sun dancers doing their traditional ceremony,” she says. “Why did it take for my people to have their own network for me to hear about that? That goes straight to the heart of why I feel so passionately about Indigenous media.”

Even well-intentioned mainstream journalists may lack the context and perspective necessary to tell Indigenous stories with nuance and authenticity. Or worse, such media coverage can careen into sensationalism, reinforcing stereotypes about Indigenous identity. These shortcomings in mainstream reporting are so persistent that NAJA has released a series of reporting guides to help inexperienced or non-Indigenous journalists. “The guides are designed to help non-Indigenous journalists navigate areas that they are completely uninformed about,” says NAJA President Tristan Ahtone, “areas that are likely shaded by bias, pop culture and lingering colonial ideas about Indigenous ‘plight.’”

On the other hand, Compton says, Indigenous journalists carry a perspective that enhances and balances coverage: “We are the experts that connect to our people, and we know how to talk to our people in our communities. We know how to fairly represent them,” she says. “We have life experiences that relate to the stories that we are covering. We bring that experience to our roles as journalists; that gives the story a different voice. Indigenous media is giving voice to people who have never had much of a voice in the last few hundred years.”

Underrepresentation of Native stories in mainstream media may be exacerbated by a disempowerment of Indigenous media from within. Despite the need for vigorous Indigenous news operations, many outlets may not have the resources or freedom to report fully on issues that concern their audiences.

When asked to rank the greatest threat to Indigenous media, more than half of respondents to NAJA’s Red Press Initiative survey identified budgetary constraints and lack of financial resources as a top threat. Although many Native publications have gone to digital-only formats to save printing and distribution costs, many Indigenous newspapers are still also available in print to serve their residents who prefer that format or may not have quality internet access. Many of these publications rely on funding from their tribal government because revenue from subscriptions and local advertising is limited.

Even the widely recognized national magazine Indian Country Today had to temporarily suspend publication. The former print newspaper published by the Oneida Indian Nation in New York became an online publication called Indian Country Today Media Network in 2011. In 2017, the Oneida Nation put the news platform on hiatus and donated its publication assets to the National Congress of American Indians. The NCAI corporation was saved by switching to a new business model: producing a mobile-based publication funded not only by advertising but by donations from the public and foundations. It relaunched in June 2018. Editor Mark Trahant (Shoshone-Bannock Tribes) says the intent was to “build a new kind of news organization—one that is sustainable, can inform Indian Country, establish a career path for Native journalists and educate everyone else.” In 2019, it added a television broadcast and now offers its online and broadcast content to other tribal and public television outlets. To give timely updates on the COVID-19 outbreak in tribal lands, it created a weekday news broadcast that airs on FNX and public television stations. Through these and its website and social media channels, the broadcast has the potential to reach more than 50 million viewers.

Another challenge for Indigenous media is maintaining independence in what is often a small community with strong tribal government influence, conditions that can hamper the basic journalistic practice of maintaining objectivity. Nearly a quarter of Indigenous media producers who responded to the Red Press survey stated that stories about tribal affairs or officials went unreported due to censorship all or most of the time. Nearly a third say that prior approval of stories by government officials was required all or most of the time.

These obstacles lead to a narrowed scope of information reaching its intended audiences. Nearly a quarter of the readers, listeners and viewers of Indigenous media responded that their Indigenous media outlets only sometimes or never reflected the range of opinions and concerns of tribal citizens. Ten percent of this group also reported that tribal citizens never have adequate information about tribal affairs.

Spotted Bear says that to properly fulfill their roles as truth-tellers, Indigenous media must have full access to leadership and be shielded from political influence. “We need to create a legal framework to protect our tribal media operations for them to be able to do their work as if they were independent,” she says. “This would require the tribes to buy into that idea, and there needs to be no strings attached to funding.”

Media for the People

When Indigenous media is supported to operate independently, then it is more than just a conveyor of information. It is an engaged partner, serving its community and its audience with depth, clarity and perspective. When Indigenous people see and hear their authentic representation in media, it empowers their voice and reinforces their Native identities.

Taylor says without Indigenous media, Native people and their issues would be near invisible in the mainstream culture and tribal governments would be less able to sustain their self-determination, or the freedom to define themselves. The role of Indigenous media, she says, is to “have control over what the narratives are about our own people. If you are not in control, if you don’t have media control and ownership, somebody else is going to have that power. It’s a huge power that we don’t often acknowledge. It’s vital, it’s pivotal and it affects everything.”

However, true self-determination may be more difficult to attain if tribal media outlets are unable to fulfill their full potential. James R. Mountain, the former governor of San Ildefonso Pueblo in New Mexico and now owner of the community’s newspaper, the Valley Daily Post, asserts that the key for Native media to succeed is for it to connect to its cultural roots. “We must be true to our Indian way—‘Naa in-bee Towa Koo paadeh peh,’ our Indian way comes first. Those are the gifts that were given to us by our creator. Be true to that. We must put that first, as part of our principles as tribal media outlets,” Mountain says. “This is one way, and it’s a very powerful way.”

Bryan Pollard is a citizen of the Cherokee Nation and a project manager at the Associated Press. He is the former associate director at the Native American Journalists Association, John S. Knight Journalism Fellow at Stanford University and executive editor of the Cherokee Phoenix.